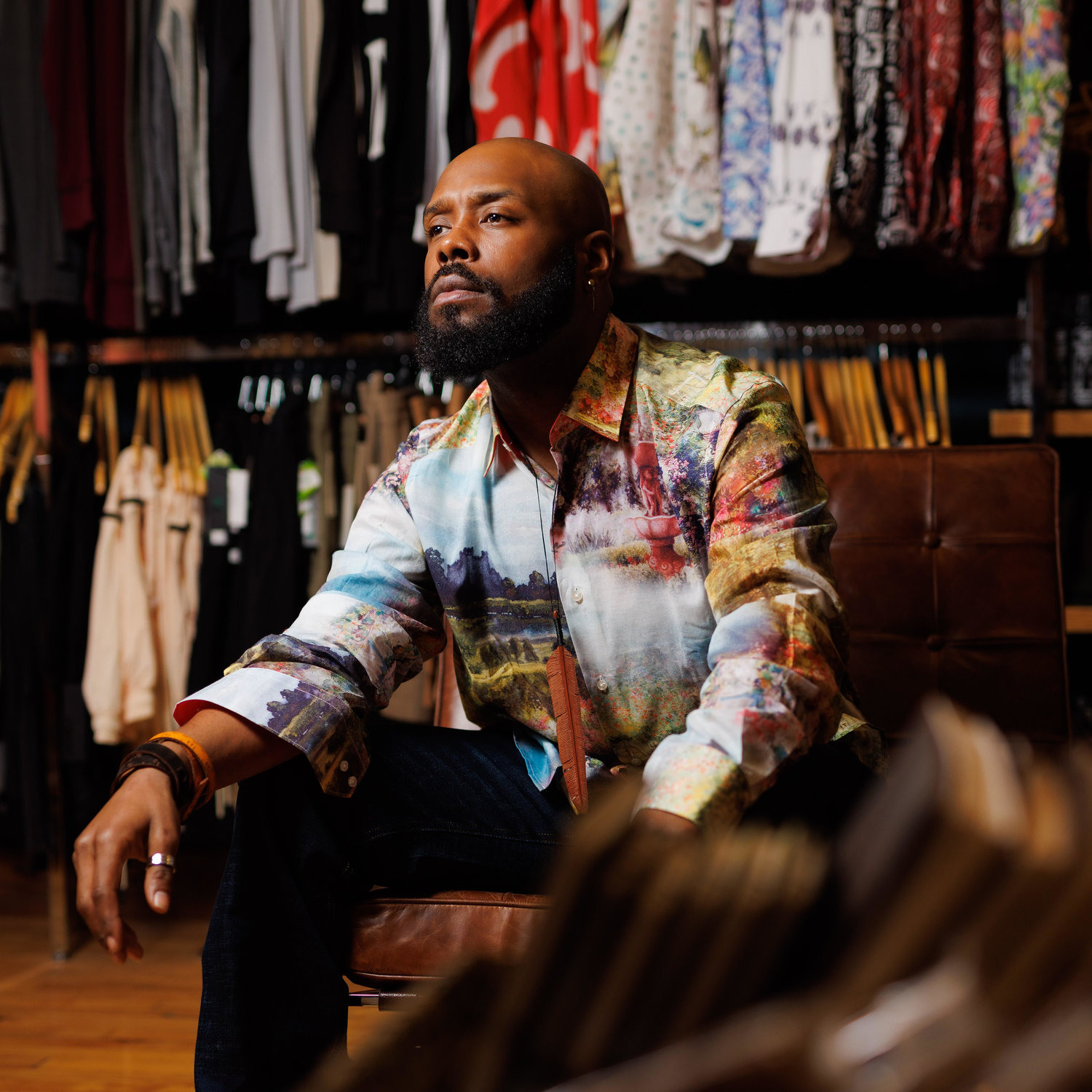 Lanstronauts will say the Capital City’s last celebrity export was actor Matthew Lillard (“Scream,” “Scooby Doo” and “Hackers”), but that must change. Cut to Oliver Brown, a professional stylist born and raised in Lansing. On May 15, he will host OLVR BRWN’S FSHN MXR — his first fashion mixer at UrbanBeat in Old Town. While Mr. Brown dreams of styling for the stars, it’s how he wears his humble beginnings that truly makes him shine.

Is there anything you’ve enjoyed about working in L.A. while living in Lansing?

Oliver Brown: What I like most about it is not paying that high rent. My family is here, so it’s nice to get away and work as a stylist in L.A., and then have that freedom to come home, have peace and reflect and refine my skills. I believe Lansing is really a great place to live. I can reflect on what to do next, and not necessarily get comfortable. Really make a game plan. I feel like there’s a lot of stress when you live in bigger cities.

How long have you lived in Lansing?

I am a Lansing native. I was born and raised here. Most of my family still lives here as well, so if you really wanted to find out things about my past you don’t have to go far.

What was it like growing up in Lansing for you?

It was a mix of everything. I had wonderful parents. I grew up in a single parent home most of my life. My mom supported me in everything I wanted to do, plus more. Every city has its challenges. When it came to my career and what I wanted to do, it became a little challenging. You know, Lansing isn’t known as a fashion capital, so I found myself having to explain to people what an editorial stylist is.

Do you recall when you first got interested in fashion?

Oh gosh, it’s so clear. My dad was an artist, so I started off quite young — drawing all the time. In eighth grade, I had a binder full of illustrations of just figures, models wearing different clothes. I remember my grandma going through them and she was very impressed. She was like, “You know, these are really good. Have you ever considered being a fashion designer?” For some reason I’d correlated being a male and being in fashion as a forbidden thing. Growing up in a Black community, it can get really rough when it comes to who you want to be in life. Especially being an openly gay male and things of that nature.

I just didn’t want to get that backlash. So, at 13, I was so surprised when my grandma told me to consider going into fashion. From that moment on, from eighth grade up until now, I decided I wanted to be in that industry. I wanted to be a designer.

When I graduated high school, my open house was fashion themed. I had designed all these really cool pieces on paper and sewn and glued them together as table pieces.  We had a red carpet come in, photographers — it was like a fashion gala. So, full circle moment, 10 years later, I’m hosting a fashion mixer event in Lansing.

When you are designing looks, who are you designing for?

There’s so many things that make up who I am. I was such a nerd kid growing up. I was the Pokémon kid. There’s a certain tribe that I’m creating for who loves those same things.

How did you meet singer Dawn Richard?

Let me just go on record saying it’s “RI-SHARD.” If I didn’t say anything, she was going to say something to me (laughs). If people don’t know who she is, back in the day, Sean Diddy Combs created a reality show called “Making the Band.”  In the show, he created a girl group called Danity Kane. I remember my family all watching that show together in the living room. I was such a huge fan of that group that it was kind of scary. I really loved her art, too. After a few years of freelancing as a stylist and getting confident in my skills, I felt bold enough to send her an email. I probably sent her like three paragraphs. That same night, she responded back and literally all she responded with was “Love your work.” And I was like, “Alright!”

Where did the conversation go from there?

I sent her a second email with a mood board, and all she said was, “Love it.” Literally just those two words. At this point, I was just getting these two syllable messages. I started to not believe I was actually speaking with her. However, we managed to set up a zoom call. I made the corner of my parents’ kitchen look like an office. It turned out to be such an organic moment. I realized that she is such a down to Earth woman and I think we complement each other well. Before I knew it, I put together a team and we went down to New Orleans for the photo shoot. Since then, I’ve styled her for her live show in New York. I’ve styled her for “Wendy Williams.” I’ve styled her for “Good Morning America.” All this came about by just sending her a cold call email saying, “Hey, I would love to work with you.”

During this pandemic, or other in times of isolation, what do you do to feel better?

I take my mental health seriously. I am a believer. I pray, I need to fast more (laughs). But for me, it’s really grounding myself — especially as an artist. You go through ups and downs. You may have a month where the clients are calling, but the next month the clients are yawning. It’s about having faith. For me, that looks like taking time to meditate and pray.