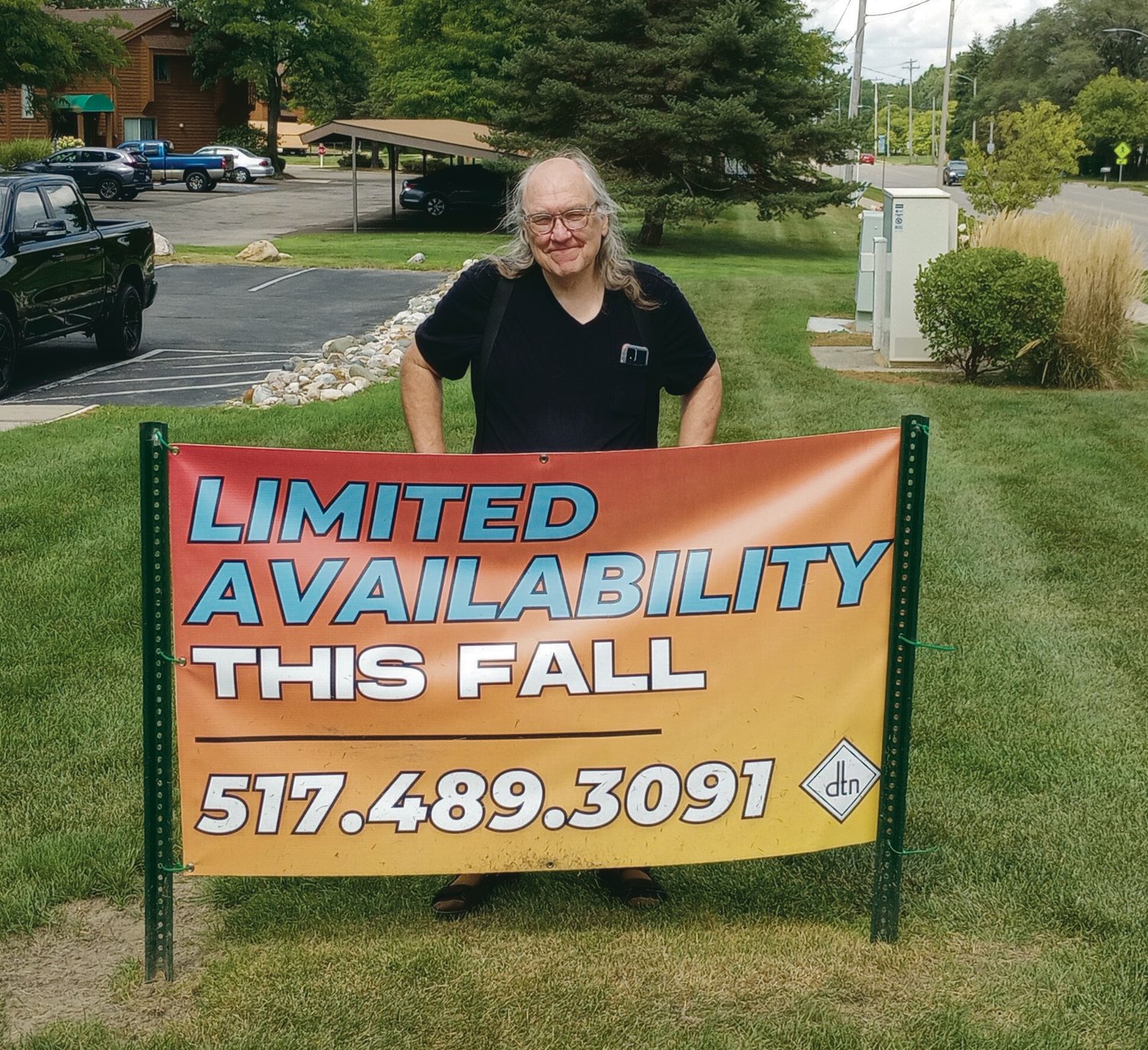 Ingham County Commissioner Mark Grebner, who is also an attorney, in front of the rental sign at Woodbrook Village Apartments, a DTN Management property in East Lansing. Grebner’s niece, Maria Yokich-Grebner, has filed a discrimination complaint against DTN after her lease was not renewed. Yokich-Grebner declined to be photographed.
Posted Thursday, September 15, 2022 4:35 am
Todd Heywood

When COVID came sweeping through Ingham County, Maria Yokich-Grebner’s job as a dental billing specialist stopped for a time. When the dental office reopened, it was slow. Patients were spaced out, and many would not come in for appointments out of fear of contracting COVID.

Her hours were cut. Then cut again. She was struggling to keep afloat with the bills and being the sole provider for her two children under the age of 7. She switched jobs, leaving a period where she had no income. She fretted about the pandemic, money, her kids' safety. But she didn’t worry about housing at Woodbrook Village Apartments in East Lansing. She always had just enough money to scrape up her monthly rent.

When the state started offering COVID Emergency Rental Assistance funding, she applied, knowing it would make the difference between struggling to make ends meet and having a cushion. Her landlord, DTN Management, filled out the forms from the Michigan State Housing Development Authority (MSHDA), which oversaw the federal dollars. By doing so, the state of Michigan sent her back rent payments directly to the landlord.

Life was settling into a new normal this spring. She was working full time. Her children were happy. And she was happy to stay in her apartment for another year. On June 10, she reached out to leasing manager Jessica Garcia to start the process of renewing her lease, which ended on July 22.

Garcia responded that her income qualifications were good and laid out various costs for the upcoming lease.

Then, for 19 days, there was silence.

Yokich-Grebner texted on June 29 asking when she could execute the new lease. Garcia’s reply text was a shock from out of left field:

“I pushed super hard to get you renewed however DTN is no longer renewing anyone who received CERA,” the leasing manager texted back. “I am super sorry! Let me know if there is anything I can do for you.”

“I did not respond,” Yokich-Grebner said in a phone interview. “It just was not expected. This was not the agreement. I mean, if I had known taking the money would have resulted in my lease being canceled, I would have found another way.”

Yokich-Grebner working with her uncle, Mark Grebner — both an attorney and an Ingham County commissioner — filed a housing discrimination complaint in East Lansing against DTN Management on Aug. 22. Monday, the city’s Human Rights Commission acted on the complaint, asking the city attorney to investigate and report back at its October meeting.

Both Yokich-Grebner and Grebner said that it is likely others who received the federal rental assistance faced similar renewal rejections. She said they observed other tenants moving out at about the same time as her lease was not renewed.

State records show millions of dollars were distributed to landlords and utility companies to pay past due rents or utility bills in Ingham County.

The state’s CERA dashboard shows that 22,046 Ingham County residents applied for the federal dollars. Of those, 15,905 applications were approved. That resulted in nearly $60 million in federal funds that was distributed in Ingham County. Of that, $51.6 million was for rent, with the rest going for utilities.

Yokich-Grebner alleges as well that DTN was still charging her late fees for the months that were covered by her CERA funding. Grebner said that move would violate the agreement landlords make when filing paperwork to accept the federal funding.

“They agreed they were made whole, and that there was no arrearage,” Grebner said. “That included waiving some or part of the late fees.”

How many other DTN tenants, if any, may have had the same experience is unknown for now.

DTN marketing director Denise Todd said the management company with 8,000 rental units in Michigan and Florida had no policy of denying renters a lease based on CERA funding.

“If something happened like that, it would have been just a human error,” Todd said.

Bach, the MSHDA spokesperson, said it was unclear if denying a lease renewal over CERA payments violated the program. She said the department would have to dig deeper into the legislation and agreements that provided the federal dollars to Michigan to determine if there was a violation. She encouraged Yokich-Grebner to consider filing a formal complaint with MSHDA.

The mother of two had already filed a complaint with the city of East Lansing. The complaint alleges that DTN Management violated the city’s human rights ordinance by discriminating based on source of legal income.

The city’s nondiscrimination ordinance empowers the Human Rights Commission to hold its own hearings, swear in witnesses, compel documents and engage in the same investigative techniques as the city attorney.

It would also speed up a resolution, she argued. The Commission only meets once a month.

If the investigation determines no discrimination occurred, the Commission must publicly dismiss the complaint it opened Monday night.

However, if DTN Management is found to have violated the city’s nondiscrimination ordinance — specifically related to housing discrimination — the Commission will act as a mediator in an attempt to resolve the conflict. If a resolution is not reached, the Commission has a wide range of options under the law. Among them are that it can refer the case to the city attorney for prosecution under the ordinance, which provides for a misdemeanor violation with a $500 fine and up to 90 days in jail if a conviction is reached; order DTN to pay damages and attorney fees; require DTN to publicly post nondiscrimination information; or refer the matter to the Michigan Department of Civil Rights for further action. In addition, because DTN Management properties are required to be inspected and licensed by the city, the licenses could be suspended or revoked.

The city could also add reporting requirements about nondiscrimination practices on the licenses as well.

Garcia, the leasing manager, is no longer employed by DTN, Todd said. She was uncertain if that was linked to her text message about CERA.

As for Yokich-Grebner, she is still living in her apartment, albeit without a lease. DTN had offered her a month-to-month lease, but according to her complaint, she was given only six hours to sign the new agreement, a deadline which she said she could not make because of work. She has given notice that she will move by Oct. 1. Meanwhile, she is subject to a $150 a day holdover fee as stated in her expired lease.

The statement by Todd that DTN does not discriminate based on CERA funding was a surprise to Mark Grebner.

“Well, that’s great!” he said. “But where is it in writing? Does that mean they are now going to stop? Funny they have not responded to any of our five letters about this.”