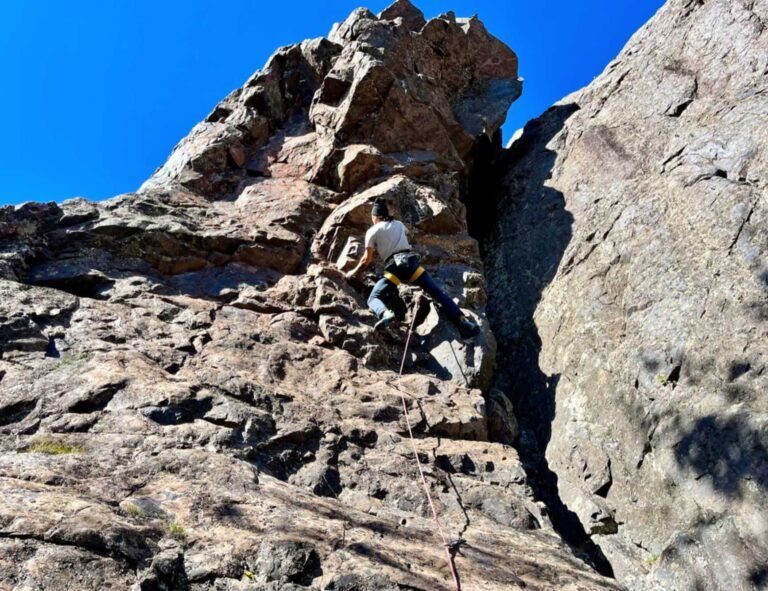 A climber navigating Slugg’s Bluff, the 80-foot-tall quartzite cliff that climbers have been enjoying since the 1970s.
Upper Peninsula Climbing Coalition 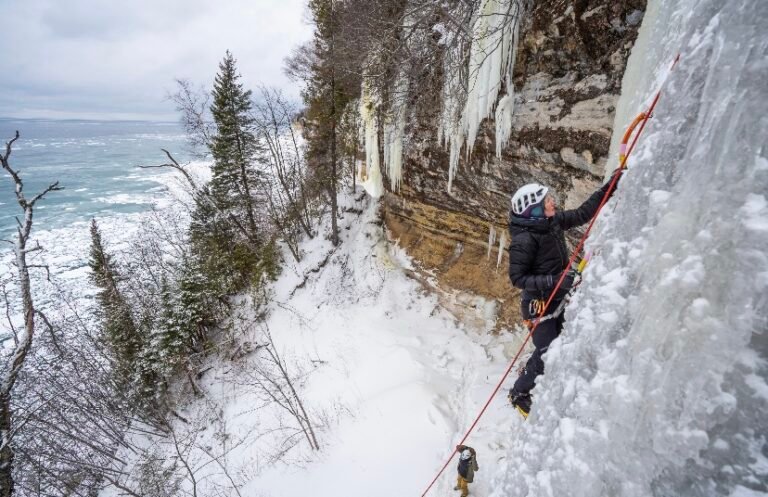 LANSING – Rock climbing might be a new tool for conserving the public land that bolsters Michigan’s annual $20 billion tourism industry.

The sport is gaining traction as outdoor enthusiasts look to experience nature differently, especially after indoor climbing gyms closed during the pandemic.

Already, there are 7 million climbers in America, and the sport’s popularity is growing.

For the first time, sport climbing appeared in the August 2021 Tokyo Olympics. The word “climbing” peaked in popularity on Google during that event.

“The nature of the outdoors user continues to evolve over time,” said Brad Garmon, the director of Michigan’s Office of Outdoor Recreation Industry.

“We shouldn’t get stuck in certain ways, where certain activities are legitimized and others not. Let’s figure out what people want to be doing in the outdoors and how we can support it,” Garmon said.

Rock climbing isn’t widely recognized in Michigan because most people don’t expect to find exceptional rock climbing there, Garmon said. That’s one thing that makes rock climbing so exciting: It can reshape how people perceive the state’s outdoor recreation opportunities.

Michigan’s outdoor recreation industry is responsible for 110,000 jobs and $5 billion in wages and salaries annually, according to Garmon’s office.

“The outdoors is part of Michigan’s heritage. It’s part of our economy and our communities. We’re an outdoorsy state,” Garmon said.

Just this year, Slugg’s Bluff in the Upper Peninsula became the first climber-owned area in the state.

The popular crag – climbing lingo for a climbable rock face – is about 20 minutes southwest of Marquette.

People have been climbing there since the 1970s, said Bill Thompson, a board member of the Upper Peninsula Climbing Coalition, a nonprofit group protecting sustainable climbing.

The Arbelius family, who had long owned the 10 acres that is Slugg’s Bluff, recognized that climbers maintained the land and donated it to them, Thompson said.

Climbers clean up the trash – anything from broken bottles to fridges – that local nonclimbers toss off the ledge.

Craig Kasmer, a park interpreter at the Department of Natural Resources and a former rock climber, said the heightened awareness that climbing demands lends itself to a deeper connection with nature. That means climbers can play a key role in conserving an area.

“Climbers are aware of their surroundings. With, say, a cyclist, it’s exercise. You need to go from point A to point B and you’re passing by trees and you’re not even looking at them.

“The slower the activity, the better. You have to be slow and meticulous when you’re rock climbing. And so you have time to stop and look at things, to be involved with the nature around you.”

As climbers ascend a wall of rock or ice, their focus is on finding the route. They must be extremely present in the search for different holds, whether with their hands exploring the rock or an ice tool testing the ice.

It’s this awareness and connection to nature that has led organizers of the popular Michigan Ice Fest to set a goal of net zero emissions over the next three years.

“Our passion relies on consistently cold weather, and that’s being threatened by climate change,“ said Matt Abbotts, a co-organizer of the Ice Fest. “If winters are milder or shorter, that means less ice climbing.”

The festival takes place an hour east of Slugg’s Bluff, and ice climbers of all levels have come for the past 30 years to climb on the banks of Lake Superior.

“Climbers might not be the biggest community, but it’s a group of strong-willed, passionate individuals who are never afraid of doing the hard work,” Abbotts said.

The U.P. has the most climbing opportunities in Michigan, with over 300 documented roped routes and a myriad of boulder problems – climbing without ropes at lower heights. But the Lower Peninsula is home to some crags, too.

In Grand Ledge, west of Lansing, climbers try to protect one of the only crags in the Lower Peninsula. The part of the park that allows climbing – Oak Park – is city-owned, and officials aren’t good about managing the area, said Ben Poulson, a Grand Ledge climber.

There are competing demands for public dollars, so city management at the ledges has fallen onto the back burner, said Bruce Bright, a member of the Grand Ledge Parks & Recreation Commission.

“In some respects, I would characterize the management of Oak Park as being one of benign neglect,” Bright said.

So, who maintains it?

“If you ban climbing, you’re banning the best environmental stewards from that area,” Poulson said. “If you allow climbing, you’re allowing people who very much care about that area to be there and to police it.”

Bright said members of the climbing community put down wood chips and topsoil and even installed makeshift wooden rails to prevent erosion.

People who spend time outdoors feel a shared responsibility to protect it. That’s why it’s so important to get people outside, said Chris Winter, the executive director of the Access Fund, a Colorado-based land trust protecting and preserving climbing crags across America.

“When you connect to the larger landscape, you start really caring about conservation and stewardship,” Winter said.

Still, some landowners with crags on their property resist climbing.

A section in Michigan’s Natural Resources and Environmental Protection Act protects landowners from liability for those injured on their land if they were there without paying and for recreation. It mentions activities like hiking, hunting, fishing and camping, but lumps remaining outdoor activities as “any other outdoor recreational use.”

But it’s one of the few activities that has never seen injury or death in Presque Isle, one of Marquette’s most visited parks. Other allowed activities – scuba diving, kayaking, hiking, mountain biking – all had injuries and deaths there, Thompson said.

Like any outdoor activity, climbing can adversely impact an area. But instead of banning an activity, management efforts to accommodate it should be bolstered, Bright said.

“Sometimes I think people are overly critical of our visitors. If the rock is damaged by overuse, is that really such a crime compared to what’s taken place over the last 100 years?” Bright said.

Winter said climbers have always played an integral role in protecting the lands that all people – climbers and non-climbers – love and enjoy.

“As we look to the future, in the bigger picture of conservation, we have to be tackling these big environmental challenges of our time,” Winter said.

“We have to do that both to protect outdoor climbing but also to protect the environment more broadly.”