A year in, LCC satisfied with keeping building doors locked 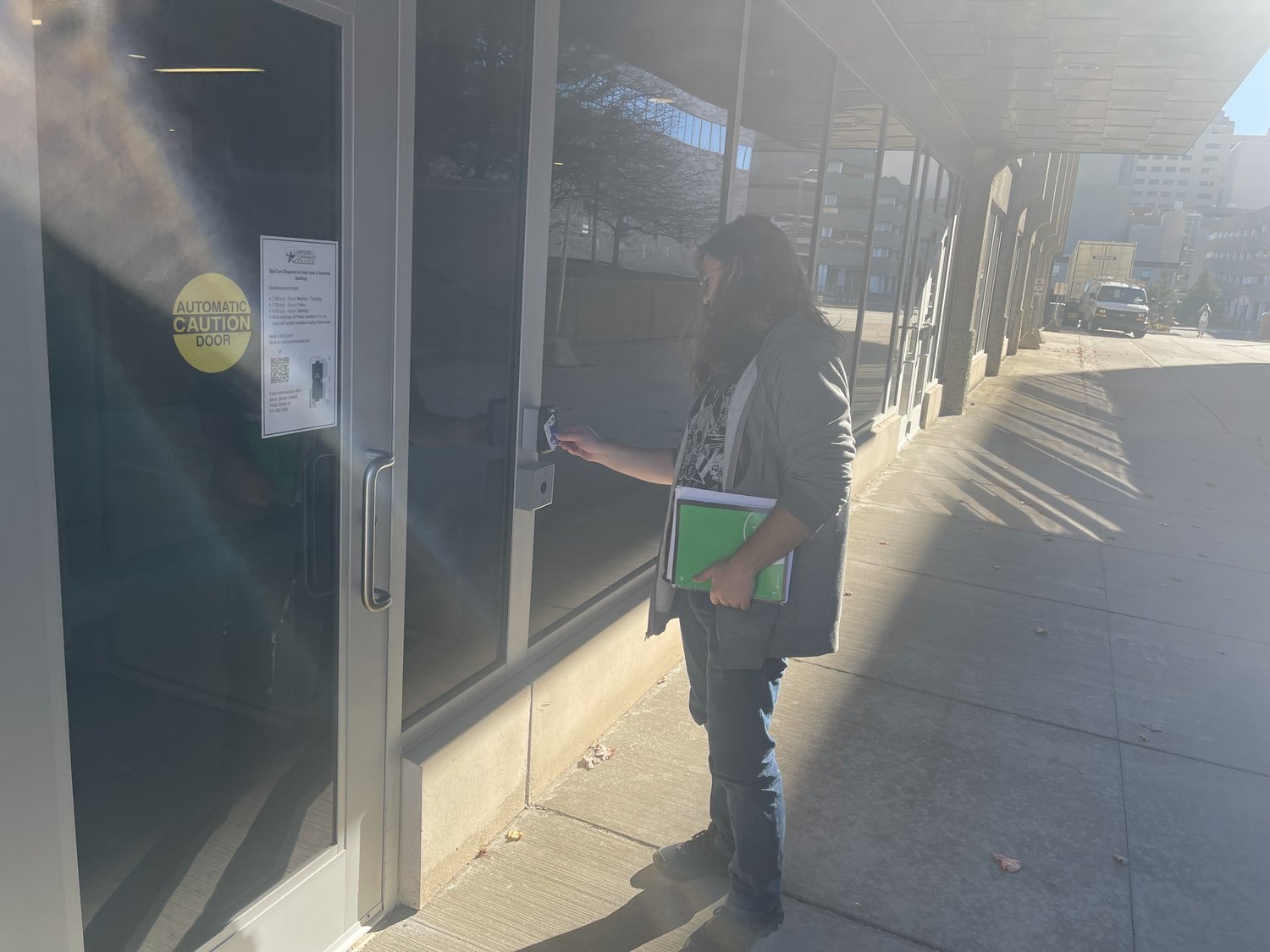 Put this down as more fallout from COVID: Lansing Community College is about to mark the first anniversary of locking up much of its main campus.

In a move that is uncommon though not unheard on college campuses, next Tuesday will mark a year since LCC began keeping some buildings locked on the downtown campus with access available only through the college’s ID card, called a Star Card.

“Post-COVID, we’ve almost got an inversion of the number of our students who are physically on campus or taking classes online,” President Steve Robinson said about the chief reason for the move.

The other reason is concern about mass shootings.

In 2018, a worried friend called law enforcement about Damain Douglas Walker. Walker, 19, sent videos of himself loading an AR-15 and Snapchat video of ammunition. He warned friends to avoid LCC at 3 p.m. Nov. 29, 2018. He also encouraged them to turn on the news at 3 p.m. that day, according to Bridge Magazine.

Friends called DeWitt Police, and at 1:20 p.m. LCC facilities were evacuated. Douglas was arrested in his Delta Township home. The Associated Press reported Walker pleaded guilty to making a false report or threat of terrorism and was sentenced to six months in jail.

“Certainly, the national landscape of school violence and violent crime in general is on our public safety’s radar at all times,” Robinson said. “But this protocol, the buildings, is something that’s been in place since last November in response to, like I said, fewer people in the buildings and mitigating against those threats where you can say, ‘It can’t happen here,’ but it can happen anyway.”

The massacre of elementary school students a year ago in Uvalde, Texas, happened in part because the gunman was able to enter the locked school through a door that had been propped open — negating the locked facility’s security program.

The LCC system allows security to lock every door in a building during a crisis, effectively containing a suspect, Robinson said.

The locked-door protocol is only on the downtown campus, Robinson said. It also cost the college no money, since the infrastructure for card swiping and the computers to support those systems were already in place.

Asked how many other colleges were locking doors, he said in talking with his counterparts from around the nation, building lockdowns are happening as a security measure, but mostly in “urban areas.” LCC East Campus, in East Lansing, and West Campus, in Delta Township, have different security protocols, Robinson noted.

Brandy Johnson, president of the Michigan Community College Association, said she had “no data” on how many community colleges in the state had lockdown protocols.

Robinson said he’s heard a few complaints about the new protocol, but in general it has been well accepted. There has been no official complaint about the system.

“I don’t think we’ve had any formal complaints, but I’ve talked to students who are like, ‘Well, it’s harder to get into the buildings,’” Robinson said. “And I think rather than being upset with LCC, they’re kind of upset with, I guess this is where we are in society now.”

A reporter spoke with 10 students and staff on campus Monday. None express concerns about the lockdown operations.

“It definitely lowers the chance of something happening, in my mind,” said student Jeffrey Charles Stych.

“Definitely one of the pros is security, for sure,” said Sarah Hamilton. “It does become a little problematic when we have perspective students and their parents who are trying to access our services in this building” (Gannon Building).

Librarian Ami Ewald said she’s worked at LCC for nearly a decade. “I’ve seen a lot of different not-so-great things happen, so I definitely think it’s a safety thing.” She did note that if someone forget his or her Star Card, “it would make it a really difficult day” on campus.

Some buildings on campus remain open to the public for certain hours, Robinson noted, including Gannon Building, the only location on campus with food, but much of the much of the building besides the food court requires a Star Card for access. The library library also remains open and accessible to the public.

Something Robinson, who authorized the policy, said he had not fully considered was the amount of data the Star Card swipes tracked in a common database. That database is available under under the state Freedom of Information Act, Robinson confirmed, potentially showing movements of particular individuals on campus going back years. That could allow an employer to verify a student actually entered a building where a class was held, or a stalker to establish a person’s schedule and activity patterns from the data.

“I frankly don’t anticipate usage of the data like that, it’s a public safety system. But you’re certainly correct that data that LCC has is public data,” he said. “If you had somebody using data like that for nefarious purposes, it shouldn’t be used that way. And we’re using it for safety reasons, obviously.”

The data from Star Card usage is subject to a retention rule established by the school. Most files are retained by public entities for seven years, then disposed of, and Robinson believed that was likely the case for the Star Card data, although he was unsure.

“I think that some of our electronic records refresh faster than that, mostly to free up server space and stuff,” he said.

Robinson said the interview with City Pulse left him thinking more about the privacy collection related to the Star Cards. “You actually made me think about some things that I have thought about, but not as deeply about the privacy aspect, the public records retention aspect,” he said.

But at the end of the day, the lock system at LCC is about public safety.

“It’s really a balancing act between access and convenience for folks that we want to use our facilities,” he said. “And then on the other hand, keeping students, faculty, employees safe.”

(Jayden Hewitt contributed to this report.)