About those ‘flushable’ wipes: Here’s why not to flush them 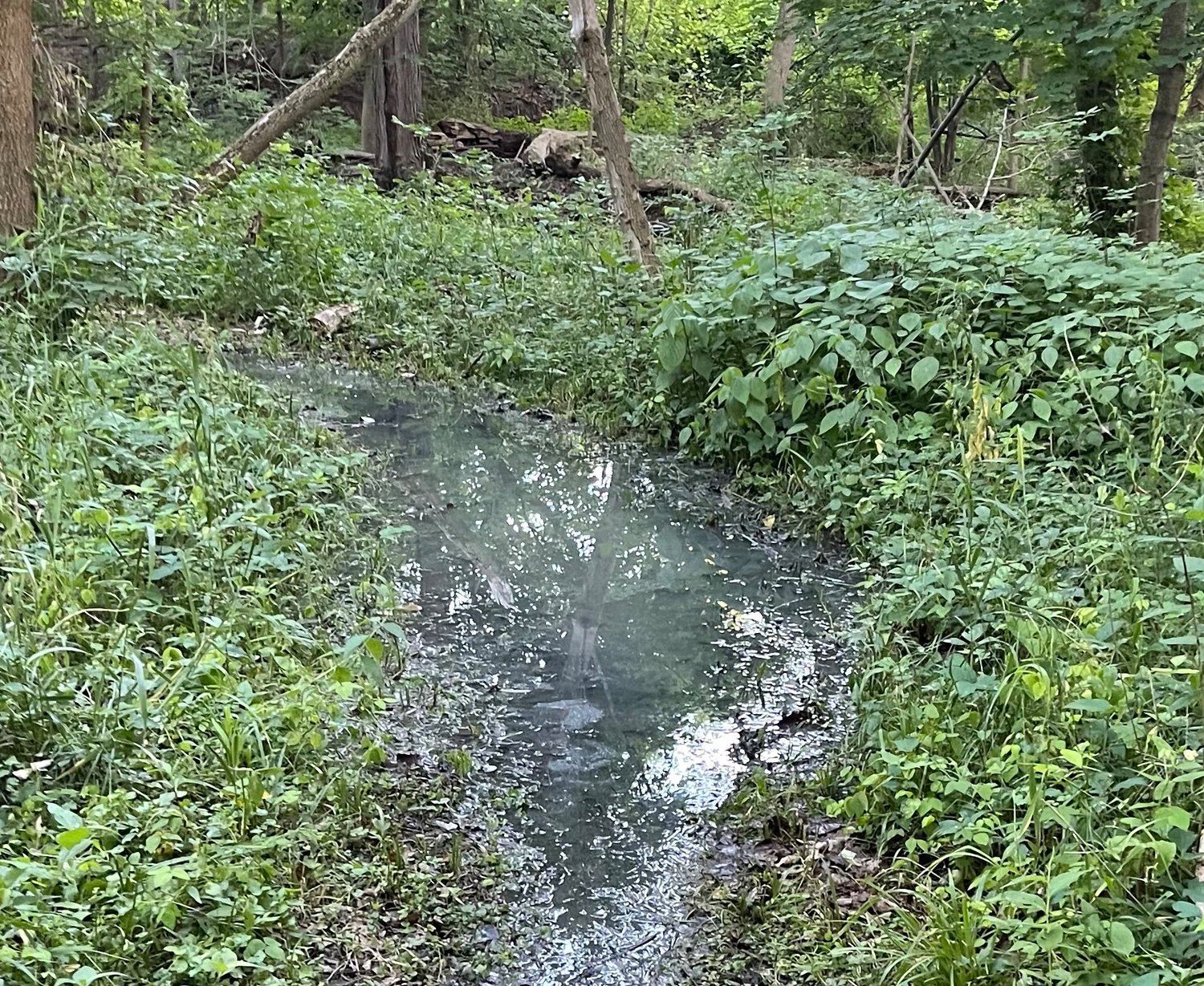 A large puddle of sewage on a mountain bike trail in Hunters Ridge Park on the city’s far southwest side. The sewage was the result of a backup, caused by “rags and flushable wipes,” in the sewer line last week.
Courtesy/Greg Pratt
Posted Thursday, July 21, 2022 12:00 am

An estimated 600 gallons of raw sewage had run from the sewer line, down a hill and into the Grand River, city officials confirmed in an email to City Pulse. How long it leaked is unknown.”
Todd Heywood

The puddle and steady stream of fluid was unexpected on the mountain bike path Greg Pratt was riding in Lansing’s Hunters Ridge Park on the evening of July 12. He stopped his biking to investigate. What he found made his jaw drop.

The steady stream of fluid was coming from a raw sewer line.

On a video he took and shared with City Pulse, the flow of sewage can be heard burbling like a small stream.

An estimated 600 gallons of raw sewage had run from the sewer line, down a hill and into the Grand River, city officials confirmed in an email to City Pulse. How long it leaked is unknown.

But what is known is that “flushable wipes” — also called moist toilet paper — contributed to the problem.

The problem with flushing those wipes, experts told The Washington Post in April 2021, is that they twist together and gather with grease and other items to create what wastewater experts call “fatbergs” that clog sewer lines, causing backups. The report noted backups in cities across the country, including Detroit.

The Federal Trade Commission in 2015 ordered Nice-Pak, a company that provided private label adult flushable wipes to companies like CVS and Target, to stop promoting them as flushable because the claims the wipes broke down like toilet paper were unsubstantiated. This May, a federal court in New York ordered a class action case settlement with the Kimberly-Clark Corp. over its flushable wipes as well. The settlement will pay households that purchased Kimberly-Clark wipes over a 12-year period.

The park is a heavily forested and naturalized expanse on the city’s far west side in a very small section of the city located in Eaton County. It was designated for mountain biking several years ago by the City Council and the Parks Department.

Raw and partially treated sewage can contain infectious agents like hepatitis viruses, giardia, campylobacter and E. coli bacteria. Giardia is a one-celled creature called an amoeba and can run rampant in the human gut. Campylobacter and E. coli cause gastrointestinal infections leading to vomiting, diarrhea, fevers and more. Infection by the bacteria can be deadly for some. Hepatitis viruses can damage or destroy the liver.

Pratt said he and his friend made calls that Tuesday evening that included Ingham County’s 911, which sent him to Eaton County’s 911. Pratt then notified Delta Township, which called the city of Lansing.

Two and a half hours later, Pratt was meeting face to face with Lansing public works staffers.

On Wednesday morning, the city workers brought in heavy equipment, covering the area where the puddle of sewage sat with gravel and lime.

The lime, Public Service Director Andy Kilpatrick said, was used to neutralize any “pathogens” that might have been in the sewage. The gravel gives the lime, which is a light powder, a chance to absorb into the area and do its job. The gravel was removed two days after the incident, he said.

The release gained very little attention last week. WLNS did a short story. Kilpatrick said local residents were not notified because “the City did not believe there was an adverse public health impact.” He wrote that the spill impacted a very small area in the park, which was cordoned off with yellow caution tape, covered with lime, then covered with gravel to remediate any concerns.

Attempts by this reporter to talk to residents found none who had experienced sewer-related issues in nearby condos and apartments.

Public Service staffers ultimately found the cause of the leak. The line was plugged with “rags and flushable wipes.” While flushable wipes are marketed as toilet friendly, the wipes do not break down and degrade the way toilet paper does. Combined with an older sewer system that may be made of clay pipes that are prone to cracking and breaking as well as allowing roots of plants to infiltrate the lines, the wipes and other items snag — causing a clog. The clogs lead to sewage releases. Michigan is not alone in suffering the consequences of flushable wipes. The produce has been identified as the cause of sewer leaks in Houston, Minnesota, Alabama and more.

City staff had to remove the wad of rags and wipes in order for the line to run correctly. This is not the first time in the last five years the city has had issues with sewage from the lines in the area backing up.

City officials responded to the area in 2018 when the sewer line had another release. That one, Kilpatrick said, was caused by a “pump failure” further up the line. The system was flushed out to remove the blockages and the pump replaced. The sewage from that line was released into the Grand River.

In August 2019, a sewer smell was detected by a resident on Thackin Drive. An investigation found that the line had backed up, but there had been no release of sewage out of the lines. The city again flushed the system using high-powered equipment.

And in May 2015, sewer backups were reported by two properties on Hunters Ridge Drive. The sewage was backing up into the private properties’ basements.

“In private sewer leads (connection between the structure and the public sewer), there are similar issues” with the main sewer line being clogged with wipes and rags, Kilpatrick wrote. “But for older clay sewer pipes, there are also issues created by cracks or open joints in the pipes which allow roots to grow into the pipes causing obstructions, crushing and settling pipes.”

A spokesperson for the state Environment, Great Lakes and Energy Department said the city notified the state about the release within 24 hours, as required. Under that same law, the city was required to notify both the Barry/Eaton County Health Department and the local newspaper with daily circulation in the area. Kilpatrick said the Health Department was notified, as was the Lansing State Journal. A search of the Journal’s archives did not turn up a story.

The city of Lansing has been working to replace combined sewer and street run-off since the 1990s. When finished, it is supposed to prevent 1.65 billion gallons of raw sewage from making its way into the Grand River and ultimately to Lake Michigan.

As for flushable wipes, the city is using its social media to remind residents to be responsible about what is flushed down a toilet.

As tweet last week notes, “It’s a toilet, not a trash can.”