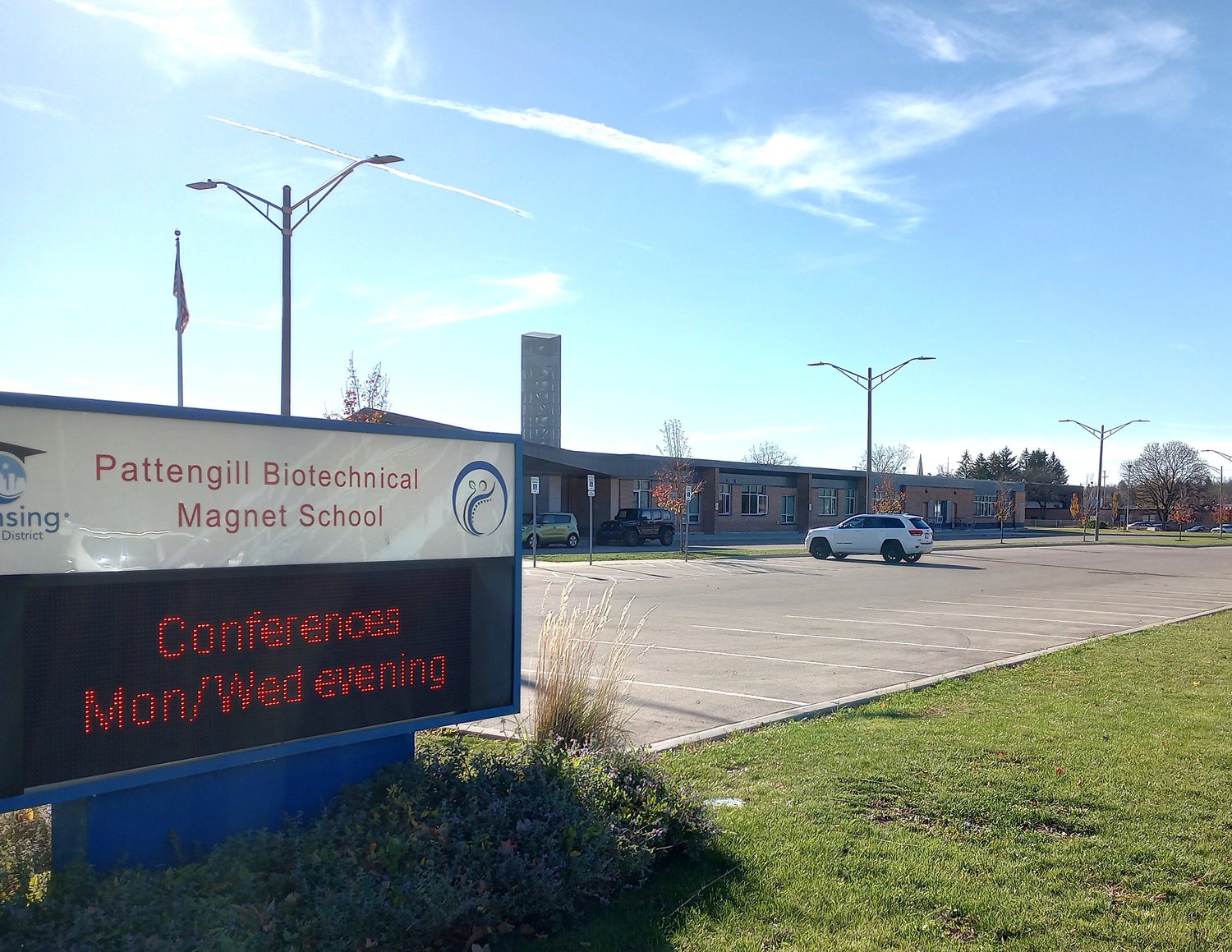 The parking lot at Pattengill Biotechnical Magnet School was quiet Tuesday because the school was closed, but parents and officials are concerned about the safety of children because of what a neighborhood leader called a “circle of chaos” during pickup and drop-off times.
Todd Heywood/City Pulse
Posted Thursday, November 10, 2022 12:01 am
Todd Heywood

Local and state officials are scrambling to address a traffic situation that Lansing Board of Education President Gabrielle Lawrence called “dangerous and a knot of chaos.”

Neighborhood leaders and school officials are concerned about traffic at Pattengill Biotechnical Magnet School, formerly the Fairview Elementary School, on the east side. Pickup and drop-off times are of most concern, said Bridget Doyle Coe, vice president of the Eastside Neighborhood Organization and a “There’s nobody watching children that are coming into the parking lot. It’s just like a circle of chaos,” Coe said.

The school is sandwiched between Grand River Avenue and Saginaw Highway, both state highway M-43, but with one-way traffic going in different directions. Twice a day the area is snarled with traffic, neighborhood leaders from the Eastside Neighborhood Organization said during a Nov. 2 meeting.

Students have to be in class at Pattengill Biotechnical Magnet School, formerly the Fairview Elementary School, by 7:40 a.m. A mass of cars floods the area to drop off kids, often bumping bumpers in the chaos. The same confusion reigns when students are released from classes at 2:40 p.m. The problem has been building since the building was re-christened Pattengill, but it did not become truly apparent until this year.

While Both Mahlow and Coe reported seeing accidents at the school, they are described as “very minor, like a bumper bump” Mahlow said, a Lansing city official said there were zero accidents reported in the area in the past year and during the pickup and drop-off times.

Lopez said the bus driver shortage is so severe that some routes end up canceled just 30 minutes before a child is expected to be picked up. That leaves parents scrambling to get their kids to the school with little notice. Coe concurred with López in the meeting.

Some help is on the way, but not soon. The Michigan Department of Transportation, which is responsible for traffic control on highways like M-43, has already conducted a traffic study and concluded a flashing red light for traffic heading north on Fairview Avenue across Saginaw needs to be a full traffic light.

The problem? It could take 18 to 24 months to get that light in place, officials from MDOT told ENO. Things like steel poles used to suspend traffic lights are caught in supply-chain issues across the country. That was, in part, due to the COVID shutdowns leaving many shipping containers at sea, on a ship in a harbor or in harbor yards, instead of on trucks fanning out across the U.S.

“We definitely ran into issues with access to those poles when we were transitioning the one-way streets to two-way in downtown,” Scott Bean, a spokesperson for Mayor Andy Schor, said. “This is totally a real issue.”

In the meantime, officials recommended that ENO members seek a school zone designation between Marshall Street and Fairview Avenue. That would slow traffic and would give law enforcement another tool to control the flow of traffic while waiting for the new light.

Aaron Jenkins, a spokesperson for the Michigan Department of Transportation, said the agency was “exploring” the school safety zone idea.

“The initial step would require a written request from the superintendent of the schools,” Jenkins wrote in an email.

Superintendent Ben Shuldiner told ENO members during the Board of Education meeting on Nov. 3 that the district would be following up with MDOT and neighbors to find a speedy solution. District officials were unavailable to respond to City Pulse by print deadline.

Bean said the city has not seen the MDOT data but is aware of the concerns of increased traffic in the area. He said Schor and Lansing Police Chief Ellery Sosebee would review any date from MDOT “and determine the best course of action moving forward. This includes the possibility of increased road patrols by LPD during these busy times and potential school zone designation.

“These are great options, but the mayor wants to take a look at the MDOT data and have a conversation with Chief Sosebee to ensure everyone is on the same page and the city can best implement any safety measures proposed.”