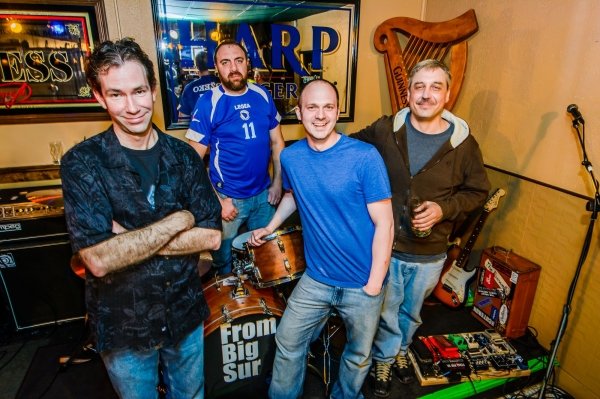 One of them is an accountant, one works in a warehouse, one is a painter and one works for the state. Together, they form the experimental rock band From Big Sur, playing Friday at Moriarty's Pub.

How did From Big Sur form?
Lance and I started the band when I was living in Portland, Ore. It was just a recording project. Then I moved back from Portland and we just kind of built a band from there. We found Shawn our drummer and Mark our keyboard player on Craigslist ads.

Can you name three albums that have influenced From Big Sur’s sound?
“Pet Sounds” by the Beach Boys, “Revolver” by The Beatles – who were just starting to get experimental, and “Blonde on Blonde” by Bob Dylan. All three of these were made in 1966, by some weird coincidence. We love modern music, too. What Jack White is doing now is great.

Do you listen to any Lansing bands?
Yes, we’re great friends with The Lincoln County Process, Jen Sygit and Big Willy. There are always a lot of musicians at our shows. It’s a great community of musicians here.

Why did you decide to move from Portland to Lansing?
I'm from Lansing and I went to Portland, Ore. to do audio production, start a band and build a recording studio. It was fun, but I missed all my friends and family. You can’t take them with you. With the Internet, now we can market our music from anywhere.

Portland is not the biggest town, but it was pretty competitive and easy to get lost in the mix there. There’s a greater community of musicians here in Lansing. There seems to be a lot of musicians helping musicians and supporting each other around here.

Who writes the music?
On our new LP, there are a few songs credited to individuals, but the rest of the album is all credited to us as a whole. We all worked on the songs and birthed it together in our studio. We only started writing it seven months ago. It’s completely fresh.

How did you release the new LP, in what format?
We released the physical copies of it June 22 at our release party at Moriarty’s. It will pop up on Facebook and our websites, iTunes, Spotify, and Rhapsody.

Has From Big Sur toured?
No, we’re keeping it local right now. We all have jobs, which allows us to have more freedom in the music we make. All of our musical choices are coming from an artistic place, not because we need to make a buck. I think that works to our advantage in a lot of ways.

What are From Big Sur’s plans for the future?
We just want to grow this little mom-and-pop-shop. All we want to do is try and make an album every year. We want to make each one completely different form any album we’ve ever made and keep pushing our limits. We want to be here in Lansing. We’ll always do that. We all get along great. We’ll be around for a while.