Whitmer on statewide lockdown: 'We are not there' 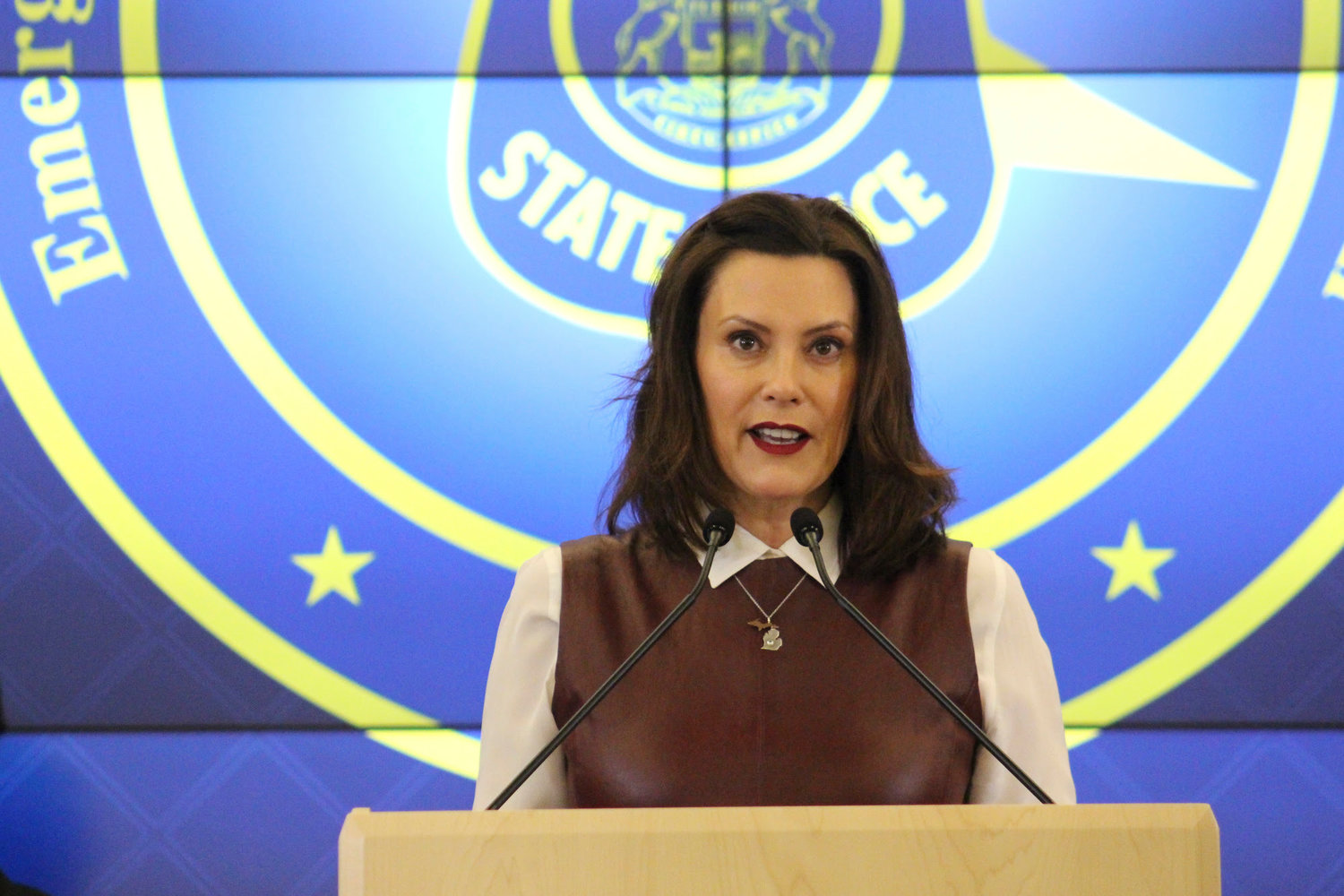 Gov. Gretchen Whitmer speaks about coronavirus during a briefing on Friday.
Courtesy 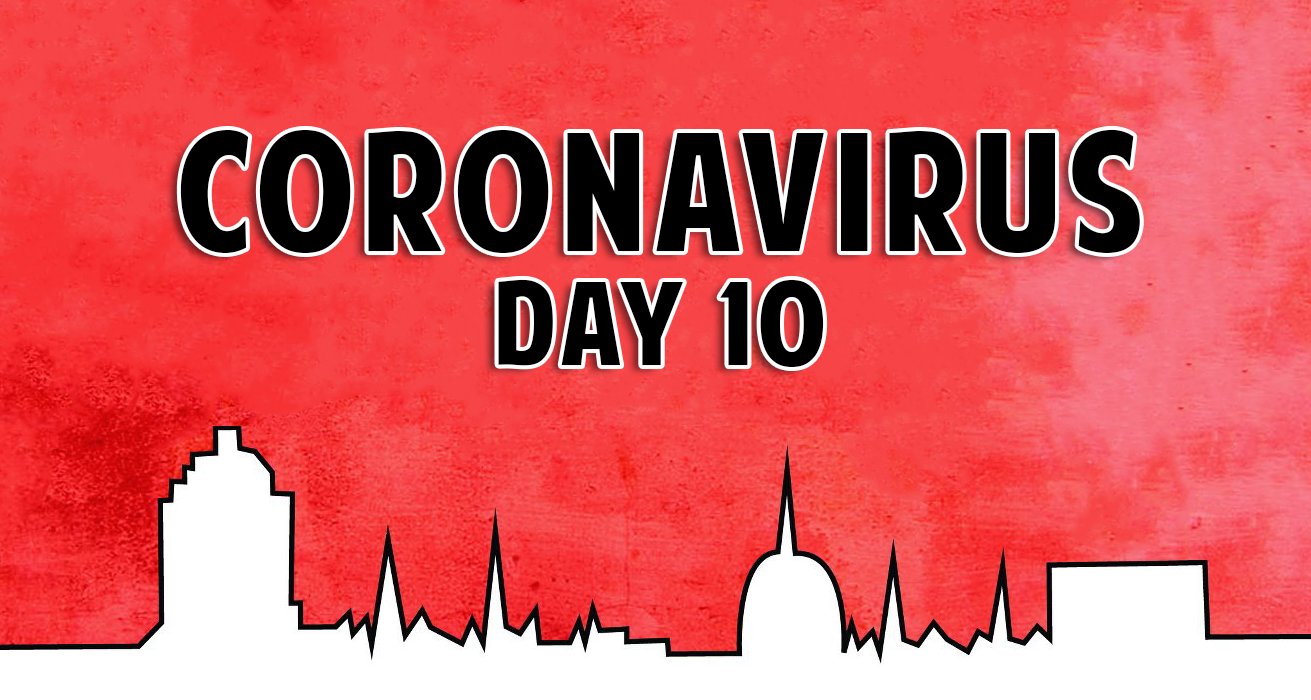 SATURDAY, March 21 — Michigan’s death toll from the coronavirus rose to five today: 3 in Detroit and one each in Wayne and Oakland counties.

At least 238 more cases of COVID-19 were announced in Michigan today, pushing the total number of cases to at least 787 statewide, including 15 from Ingham, Clinton and Eaton counties.

And as other state governors order their residents to shelter in place amid multiple statewide lockdowns, Gov. Gretchen Whitmer firmly pushed back against the measure in Michigan yesterday: “We are not there,” she said.

And as other state governors order their residents to shelter in place amid multiple statewide lockdowns, Gov. Gretchen Whitmer firmly pushed back against the measure in Michigan yesterday: “We are not there,” she said.

Widespread rumors of an upcoming order to shut down more businesses and keep residents home are “based on nothing that was actually concrete or something that’s being talked about in the moment,” Whitmer said at an afternoon briefing, although not ruling out a possibility that more executive action may become necessary.

“I recognize that not having plans to do something right now doesn’t mean, at some point, we might have to take more aggressive action,” Whitmer said, noting any shelter-in-place orders would be sent directly from her office to the public.“ We’re clearly listening and paying attention to what other states are doing.”

“We are sharing best practices, sharing our best medical advice and information that we are using to make informed decisions. And we are constantly monitoring because the information is changing so rapidly.”

She also clarified that churches, unlike many others, are exempt restrictions that limit gatherings to 50.

Nurses working at several, major hospital systems in Michigan — including some McLaren Health Care facilities — said they’re working without proper protective gear like masks, gowns and face shields to keep themselves from getting sick, according to detailed accounts published today in the Detroit Free Press.

And with death tolls rising in southeastern Michigan, Oakland County officials today ordered all enclosed shopping malls in the county to close and restricted access to playground equipment, the Free Press reports.

Dr. Joneigh Khaldun, Michigan’s chief medical executive and deputy director for health, said she expects more fatalities and COVID-19 cases in Michigan, reports the Detroit News. And yesterday, she floated estimates suggesting millions could contact COVID-19 over the coming weeks as the virus continues to spread.

Estimates for the number infected in Michigan, however, are difficult to lock down with any specificity.

“We have been in close conversations with our scientists and other scientists at University of Michigan to look at the modeling,” Khaldun said. “To be honest, Michigan has so few tests that have been done, that the model is not going to be accurate enough to project out like maybe other states are able to do. But that said, there are predictions across the nation that anywhere between 40-60% of the community will actually end up having this disease. But we are actively working on getting that more specific modeling data.”

Whitmer also personally passed out food and school supplies yesterday at J.W. Sexton High School to help keep students learning during the COVID-19 outbreak as the number of cases in Michigan continues to rise. The district has distributed up to 8,000 food packages daily to Lansing families since schools were closed.

By executive order, she also suspended all evictions until April 17, allowing tenants and mobile home owners to remain in their homes during the pandemic — even if they are unable to stay current on their rent. The order also relieves courts from certain statutory restrictions to enable them to stay eviction proceeds.

An order from earlier this week also expedited child care licenses in order to expand access and help health care providers find care for their children. It allows employers, like hospitals, to operate a disaster relief child care center and opens school facilities for the purpose of maintaining emergency child care centers during closures.

Non-essential medical and dental procedures, including routine checkups, have also been postponed statewide until at least March 21, by yet another executive order from Whitmer's office early yesterday afternoon. It mostly limits hospitals, dental offices and other health care facilities to only essential procedures.

Capital Area Transportation Authority announced yesterday its regular bus routes will be suspended starting on Monday and continuing through at least April 5. CATA will only offer free, on-demand service for the community's most vulnerable populations, as well as its essential workforce, key government employees and those who support the region's "critical infrastructure." Call 517-999-2549 with questions or ride requests.

Four of this week’s cases also involved students at Michigan State University with a history of international travel, according to a statement. The University of Michigan also confirmed a case, The Detroit News reports.

The Lansing State Journal reports 73 inmates were released from Ingham County’s jail between Monday and yesterday morning amid efforts to reduce the risk of COVID-19 in jails. Low-level offenders and those who already served a significant amount of time were among those released, Sheriff Scott Wrigglesworth told the Lansing State Journal. Others were those sentenced to serve weekends in jail and those on work release.

Crain’s Detroit Business reports unemployment claims surged yesterday by 70,000, with a spike of at least 55,000 claims in Michigan after Whitmer moved to expand unemployment benefits as a COVID-19 response.

And mixed news for high school students: Those attending online classes during the coronavirus shutdown won’t be able to count it toward their required annual instruction hours. The Department of Education also said it has no plans to reduce the number of hours that kids need this year, reports the Detroit Free Press.

Whitmer later released a statement ensuring that work done during closures would count toward grades, credits and graduation. She encouraged all parents and students to “hang in there” during this unprecedented crisis. Students are not required to take the M-STEP and other state-mandated tests, reports the Detroit News.

Attorney General Dana Nessel’s office is continuing to take calls on its Consumer Protection Hotline — 877-765-8388 — amid crackdown on price-gouging in the wake of the pandemic. State legislators will take calls at Nessel’s office over the weekend too. The office has received more than 1,000 complaints over the last week.

The border between the U.S. and Canada was closed to non-essential traffic at midnight this morning, reports the Detroit Free Press. The announcement was made yesterday and is expected to remain in place for the next 30 days. A similar closure is being imposed along the southern border, according to the U.S. officials.

Beginning Monday, all Michigan Secretary of State branch offices will return to regularly scheduled branch hours from 9 a.m.  to 5 p.m. on Monday, Tuesday, Thursday and Friday and 11 a.m. to 7 p.m. on Wednesday. In-person transactions, however, will continue to be available only for critical services and by appointment.

In Detroit, more than 150 police officers stopped working yesterday and remain in quarantine amid the outbreak, including at least five who tested positive for COVID-19, the Detroit Free Press reports.

Cedar Point officials announced today the park will delay its spring opening in response to the coronavirus outbreak, reports the Detroit News. Instead of opening the first Saturday of May, it plans to open in mid-May.

Meijer, Walmart, Sam’s Club and Kroger are hiring during the pandemic, reports the Lansing State Journal.