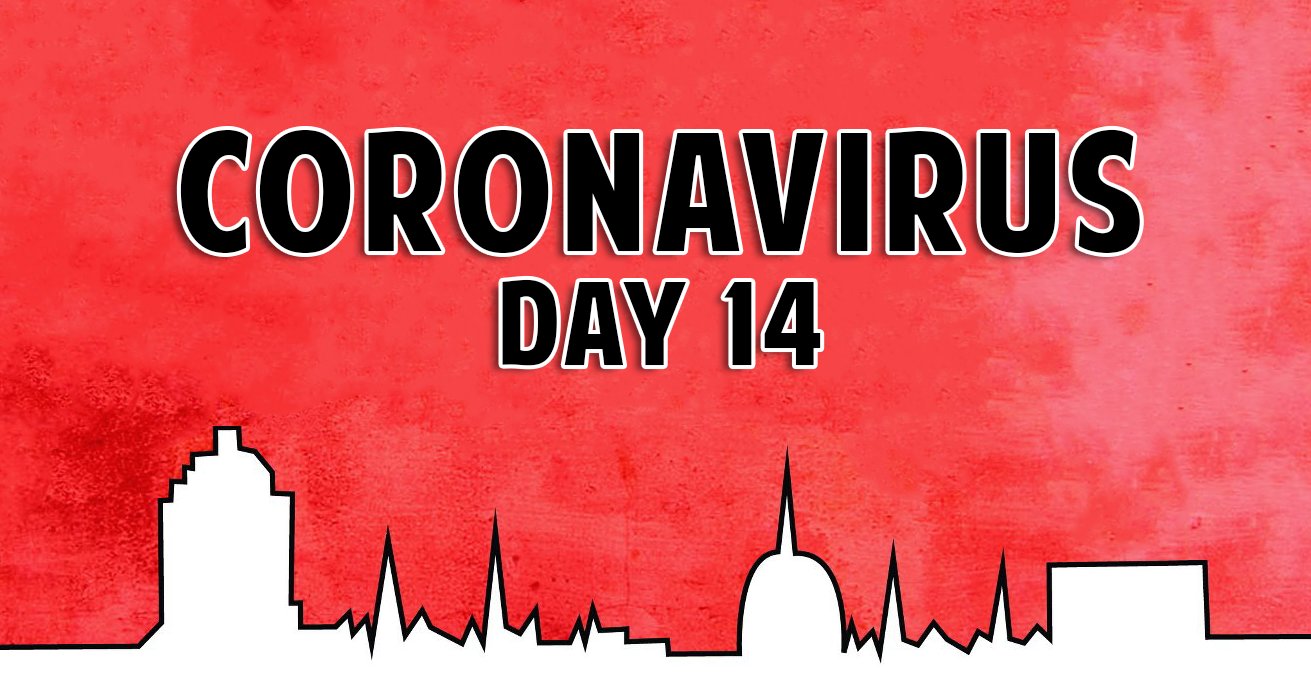 WEDNESDAY, March 25 — At least 19 more people were reported dead from COVID-19 in Michigan this afternoon, nearly doubling the statewide death toll to 43 as the number of confirmed cases surged to 2,300.

Statistics released by state officials earlier afternoon identified 507 new reported cases of COVID-19 in Michigan, edging the statewide tally to 2,295, with at least 27 cases in Ingham, Eaton and Clinton counties. Officials estimate the actual number of cases to be much higher as more tests are processed on a daily basis.

The U.S. Centers for Disease Control and Prevention, as of late yesterday evening, list a total of 54,453 cases of COVID-19 and 737 deaths. The New York Times database, as of last night, lists at least 59,502 confirmed cases and at least 804 deaths nationwide. Reports are generated as frequently as possible based on new test results.

Without more aggressive transmission control in Michigan, Gov. Gretchen Whitmer warns the pandemic could continue to spread, citing projections this week that indicate up to 70% of the population — nearly 7 million Michiganders — could contract the disease in coming weeks, much like the trajectory witnessed in Italy.

At least 31 of the 43 deaths in Michigan are reported from Wayne, Macomb and Oakland counties, including the city of Detroit. Livingston County — with 16 confirmed cases — charted its first confirmed COVID-19 related death today. Kent County also has also tracked at least one death last week among its 36 confirmed cases.

Officials said Michigan currently only has about 25,000 acute care beds available for patients this week. Beaumont Health, the largest health care system in the state, announced yesterday that it was “nearing capacity” as it continued to care for nearly 450 COVID-19 patients across eight hospitals, reports the Detroit Free Press.

Whitmer said hospitals — in addition to a looming shortage of patient beds — are also facing a dearth of medical equipment like face masks, gowns and ventilators as legislators push for more federal supply funding. She called on residents and businesses to donate their unused medical supplies and protective equipment.

Tina Ray, president of the Professional Employees Council at Sparrow Hospital in Lansing, represents a group of more than 2,200 employees across 51 separate disciplines. Yesterday, she told City Pulse that although no employees have complained about a lack of supplies, an expected influx of patients calls for proactive measures.

“There’s just a spirit of teamwork,” Ray said. “Everyone is collaborating to do what they can to help. In the units that are taking care of the COVID-19 patients, there’s just this amazing spirit of teamwork. The nurses and other health professionals are working together to care for those patients. Together, it’s just a great team.”

To assist in efforts to combat the spread of coronavirus, Ford Motor Co. announced yesterday it would partner with 3M to ramp up respirator production using parts from both companies, reports the Detroit Free Press.

Much other production, however, remained on pause.

For many, yesterday was a stark adjustment to a much quieter life under Gov. Gretchen Whitmer’s sweeping, “Stay Safe, Stay Home” executive order that took effect at midnight on Tuesday. For the next few weeks, until at least April 13, all nonessential employees have been ordered to stay home, except in very limited circumstances.

Whitmer’s order halted most commercial development, encouraged many businesses to temporarily close their doors and mandated that all residents largely stay inside their homes unless employed in a limited, “critical infrastructure workplace.” Businesses that attempt to skirt the rules could face consequences, officials said.

Michigan State University halted all construction projects, as did many development companies and contractors. But a contingent of the industry — including officials at Associated General Contractors of Michigan — is pushing for Whitmer to exempt all commercial buildings, reports Crain’s Detroit Business.

Other businesses — like gyms, spas, theaters, hair and nail salons, tattoo shops and other retailers — have already been shuttered under an executive order from last week. Gatherings of more than 50 people are largely restricted, except for church crowds, with many switching to virtual services. All employees are able to work remotely.

Officials advise that certain outdoor activities, like exercise, and tasks necessary for health and safety — like a trip to the hospital or grocery store — are still permissible. When residents leave their homes, they’re also required under executive order to maintain a six-foot distance from other people outside of their immediate households.

The Detroit Free Press reports residents can expect to see more closures at professional firms, such as law offices, real estate companies, accounting organizations and other services as the pandemic spreads.

A “willful” or deliberate violation of the executive order could lead to fines of up to $500 and up to 90 days in jail, though police have cautioned residents not to dial 911 to report any violations, reports The Detroit News.

As the number of coronavirus cases increases in Michigan, the state Legislature has decided to cancel its legislative session today, delaying a supplemental school aid bill for K-12 students, reports the Detroit Free Press.

Michigan is allowing both medical and recreational marijuana sales to continue under the governor’s recent order, though sales are limited to delivery and curbside pickup. All in-store retail operations were to closed yesterday, according to a statement from the Michigan Department of Licensing and Regulatory Affairs.

State officials yesterday released reports of increased revenue at medical and recreational pot shops in the days surrounding the primary election and Whitmer’s announcement that COVID-19 was detected in Michigan.

Though the executive order has halted most commercial development, developers of the former Red Cedar Golf Course in Lansing have announced plans to push forward with construction as soon as the order has been lifted.

The city of Detroit has spent about $11 million over the last month responding to the COVID-19 outbreak, Mayor Mike Duggan estimated during a news conference yesterday, reports Crain’s Detroit Business.

Roads and freeways will be open. There will be no checkpoints and Michigan State Police troopers won’t be asking for your papers, according to Detroit Free Press reports. “This isn’t martial law,” authorities explained.

Attorney General Dana Nessel this week assigned a team of special agents to assist her attorneys with an increasing number of price-gouging complaints amid the pandemic. And yesterday, it issued cease-and-desist letters to businesses in Rockford for allegedly ripping off customers with a $50 “Coronavirus Defender Patch.”

Nearly 1,600 price-gouging complaints related to COVID-19 have been filed with Nessel’s office to date.

A Detroit Police call taker is dead from the coronavirus as at least 282 police department employees remain in quarantine — with at least nine testing positive for COVID-19 — this afternoon, reports the Detroit News.

Those looking to donate cash to the Sparrow Foundation’s response fund can do so online. Medical goods and equipment can be donated at a new drop-off site at the old Eastern High School, weekdays 10 a.m. to 4 p.m.

McLaren Greater Lansing — although it has the equipment needed to protect staff as they care for patients with COVID-19 — is still accepting supplies at its administrative offices weekdays from 9 a.m. to 5 p.m. Call 517-975-7100 or visit mclaren.org/lansingfoundation for more information or to arrange a dropoff donation.

The city of Lansing has also opened drop-off locations for homemade masks, unopened packages of gloves, cleaning supplies, N95 respirators and other protective gear to help alleviate an ongoing equipment shortage for first responders, health care workers, homeless shelters and others that work with vulnerable populations.

Those items can be dropped off anytime at either the Fire Department Station #8 at 815 Marshall St., the Lansing Police Department’s downtown headquarters or its local operations center at 5815 S. Wise Road.