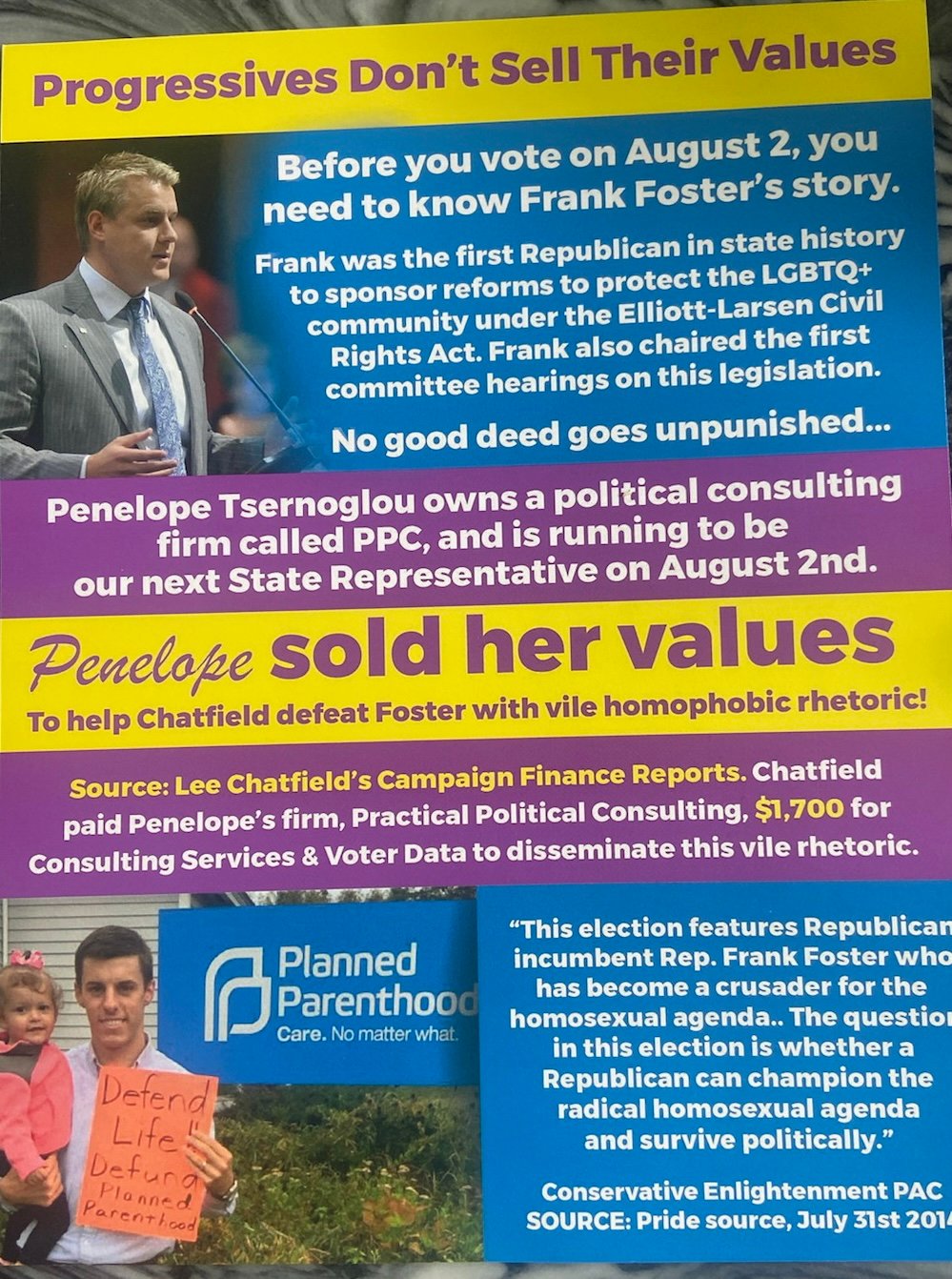 (Correction: This story has been updated to correct an earlier version that called the money that paid for the flier "dark money," which is money from anonymous donors. The organization that paid for it is a political action committee, which must report donors' identities.)

A political action committee calling itself Mid-Michigan Democrats for a Well Informed Electorate has sent voters in the new 75th House district a flier that accuses Tsernoglou of “selling her values” through her business, Practical Political Consulting, over some of its Republican clientele.

The organization was formed last month by a Stivers supporter, Meridian Township Treasurer Phil Deschaine. The mailing address on the flier is his home address in Okemos.

Neither Stivers nor Deschaine responded to phone calls.

The mailing piece ties Tsernoglou to former Republican House Speaker Lee Chatfield, who has been caught up in a sex scandal, and Republican Robert Regan, a unsuccessful West Michigan state House candidate who gained national noteriety for remarks about rape and conspiracy theories related to QAnon and Jews.

The mailer uses campaign finance reports to show that the business accepted $1,700 from Chatfield and $11,807.96 from Reagan.

“Yes, our firm is non-partisan (this has never been a secret),” Tsernoglou, a former Ingham County commissioner, wrote on her campaign Facebook page July 7. “We sell lists of voters to Democrats, Republicans (generally only in primary elections — we figure, let them fight it out and waste money attacking each other!) and Independents.”

Stivers, an Ingham County commissioner, took to Facebook to deny any foreknowledge of the mailer and didn’t condone it .She said she was running a “positive campaign” but then said her team had validated the information on the mailer. Stivers then said voters should consider that information as they make their primary selection in August.

The two women are part of quartet of Democrats seeking the nomination in the new 75th House district, which includes the eastern part of Ingham County and portions of Shiawassee and Clinton counties. The other two candidates are Graham Diedrich and Don Keskey.

In her Facebook post, Stivers accused Tsernoglou of implying she was lazy. She said she has been very sick with Long-COVID and other complications, preventing her from knocking doors and introducing herself to voters.

“How dare you say I am not working hard enough?” she said in her video.

Stivers was responding to Tsernoglou’s social media post about the attack mailer.

That last part, Stivers said, was tantamount to calling her the “B-word.”

The bitter squabble has drawn a condemnation from the Meridian Democratic Club, a MeridianTownship organization, which yesterday called the mailer "not only shameful and disunifying, but an embarrassment for the Democratic Party."

"The MDC supports and promotes Democratic campaigns that engage in respectful dialogue, focus on the issues, and refrain from attacking candidates or their businesses," its chair, Greg Gavrilides, wrote.  "We find it particularly reprehensible that the personal values of candidate Penelope Tsernoglou were vilified.”

Tsernoglou owns and operates Practical Political Consulting, a Lansing firm that specializes in voting lists. She demurred when asked in a phone interview if she regretted working with the two candidates. “It’s my business. I wasn’t involved in those sales.”

She declined to say if her business had a responsibility to background candidates before selling them voter lists. But she did say that the business Practical Political Consulting did with Regan was in 2014 and she would “not sell him anything today.”

Regan won the GOP primary for the 74th district House seat special election  this year. He turned heads — and made national news — when he told a Facebook livestream, hosted by a conservative group that he tells his daughters that if “rape is inevitable, just lean back and enjoy it.” In the same livestream, he said the Russian invasion of Ukraine was fake and so was the COVID pandemic.

Regan lost the race to Democrat Carol Glanville in May.

The flier attacks Tsernoglou for selling a voting list to Chatfield that was used to attack Frank Foster, a House member who was credited with being the first Republican to support including the LGBTQ community in the state's Elliott-Larsen Civil Rights Act. Foster was defeated in the 2014 GOP primary.

Since leaving office, Chatfield has been been accused of engaging in a sexual relationship with a teenager enrolled at the private Christian school attached to an Independent Fundamentalist Baptist Church run by his father. The teenager, who was 14 or 15 at the time the alleged sexual activity began, subsequently became Chatfield’s sister-in-law. Chatfield has admitted to having had a sexual relationship with his sister-in-law when she was an adult while Chatfield was in the House and during his time as speaker.

In addition, Chatfield and his former office staffer are under investigation for improper use of campaign dollars.