Flash in the Pan: Dumplings with tofu and stir-fried vegetables 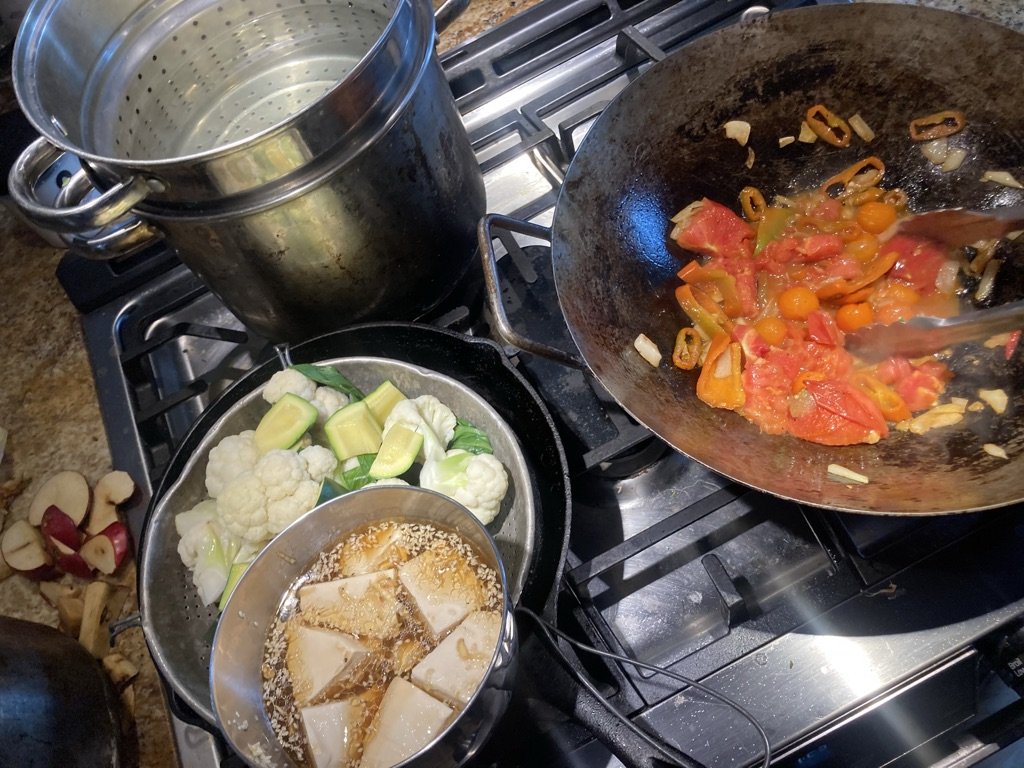 A stir-fry with tofu and fresh vegetables being prepared by Ari LeVaux.
Ari LeVaux
Posted Wednesday, September 15, 2021 12:00 am
Ari LeVaux

It had to be done, so I might as well have done it, I told myself, as I dumped the thawed package of supermarket pot stickers into the vegetable stir-fry. I may be crazy, but it’s a lock that my kids will like it. So how crazy could that be?

Trying to make a stir-fry can get a home cook in trouble. It might seem like a simple kind of recipe, until you try to make it and the eggplant is chewy, the broccoli is mushy and it doesn’t taste like it does at the Chinese restaurant. Instead it tastes like burnt soy sauce and perhaps balsamic or cider vinegar, because you didn’t have rice vinegar or sherry and figured those ill-fitting replacements would be fine.

Indeed, there are so many mistakes to be made, so many of which seem like good ideas at the time. I’ve made them all, many times, sometimes all at once. Adding pot stickers to my stir-fry, meanwhile, seemed like a good idea at the time and remains, by all accounts, a good idea and not a stir-fry mistake.

Many stir-fry mistakes start at the intention to make it in the first place. Why are we doing this?  If we are making stir-fry as a way to clean out the fridge on a Friday night, because the next day is farmers market, then that’s just not enough.

Executed properly, a stir-fry can be a celebration of fresh produce, not a waypoint between the back of the fridge and the compost pile.  It should be a stage for the bright colors and crisp textures of the season.

But like any stage, too many actors can get in each other’s way. Another common mistake is to get too busy with your stir-fry. Even if each and every veggie is the freshest specimen under the sun, you don’t want to use them all. A stir-fry requires restraint. It is not some complex ecosystem that depends on diversity. Choose one or two veggies and let them be the main event. A star, balanced with a co-star and perhaps a supporting protein or two, bound together by a sauce that tastes like a stir-fry is supposed to, a.k.a. how it tastes in a Chinese restaurant.

Here are the most common stir-fry mistakes, based on my extensive personal research.

Not hot enough. High heat is necessary for imbuing the contents of the wok with a smoky glow called “wok hei,” which translates to breath of the wok.

Not wok enough. Not heavy enough, that is. A light wok will lose its heat when stuff is added.

Not blanched enough. Use water, not steam. If we don’t blanch, we burn our aromatics.

Cooking too much at a time. An overfilled wok means the veggies don’t all get the time they need against the hot wok and in the hot oil. In fact, adding too much stuff can cool down the wok, killing that wok hei buzz.

Cooking in sesame oil. Sesame oil — toasted sesame oil, I should emphasize — is for flavoring, not for cooking. Fry with a heat tolerant oil like safflower, peanut or a frying blend.

Not enough oil. In these times of calorie counting, it can be tempting to pull back on the fry oil. But then your wok won’t get hei, and that’s no fun.

Adding sauce early. Have you ever burned soy sauce? I have. It smells and tastes bad and makes the pan hard to clean. Any soy and soy-like sauces should be added toward the end of cooking to coat the food, but not cook with the food.

The other day I made a stir-fry with cauliflower and zucchini. I decided to add tomatoes to the sauce, so their savory flavor could mix with the soy sauce, oyster sauce and sesame oil, increasing that umami impact. Since I was too lazy to make rice, I decided to just add some pot stickers to the wok. They went perfectly with the crumbled tofu tomato stir-fry sauce.

The tofu crumbles into the savory sauce, which drenches all it touches in a silken tapestry of flavor.

A clove of garlic, grated

Combine all of the ingredients except the tofu and mix thoroughly. Add the tofu, stir it in, and let sit for at least an hour.

Boil a pot of water in which to blanch the vegetables. Add them to the pot in order of longer cooking time: first the cauliflower. After three minutes, add the zucchini. After another minute, add the bok choy. Give it 30 seconds of boiling and then remove all of the blanched veggies and plunge them in an ice bath. This will stop the cooking and keep the veggies crispy and bright colored. When the veggies are cool, drain them.

Heat the oil on high in a wok or heavy bottomed pan. Add the garlic, ginger and onions. Let them fry for a minute or two in the sizzling oil. Add the tomatoes and let it cook into a sauce for about five minutes, stirring often. Add the veggies and stir-fry.

After about five minutes, add the marinated tofu and all the marinade. Stir. Taste. Season with any of the ingredients from the marinade.

Drain the excess sauce from the wok by tilting it over a pan and holding back the contents. Put the sauce on medium heat to thicken, and set the wok back on high and continue cooking. More moisture will seep from the stir-fry. Stop stirring and let the moisture cook off. When it’s nearly gone, turn off the heat. Add the reduced sauce back to the stir-fry, mix again and serve.