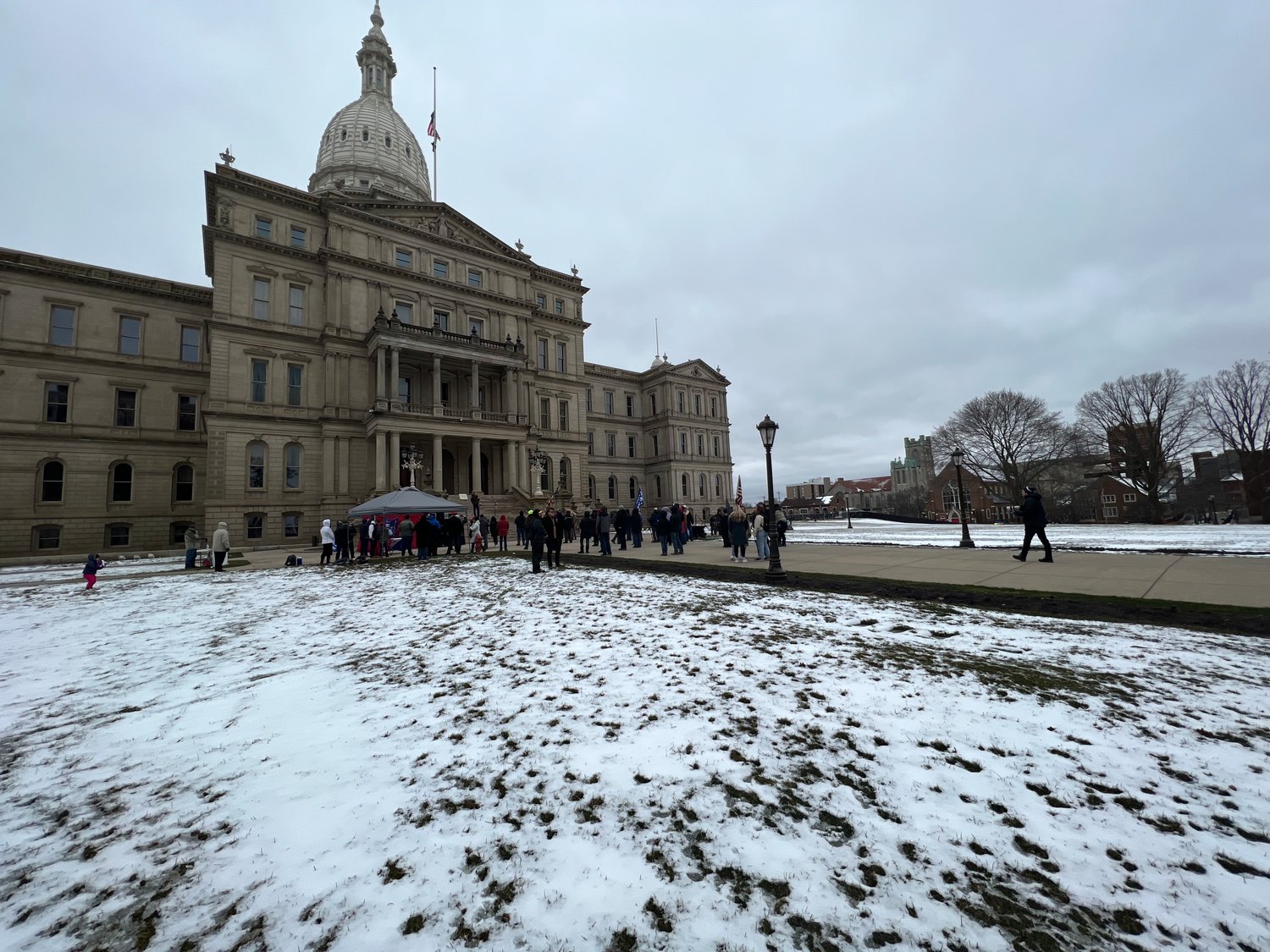 Fewer than 100 attendees turned out for the MAGA rally on Saturday.
City Pulse/Kyle Kaminski 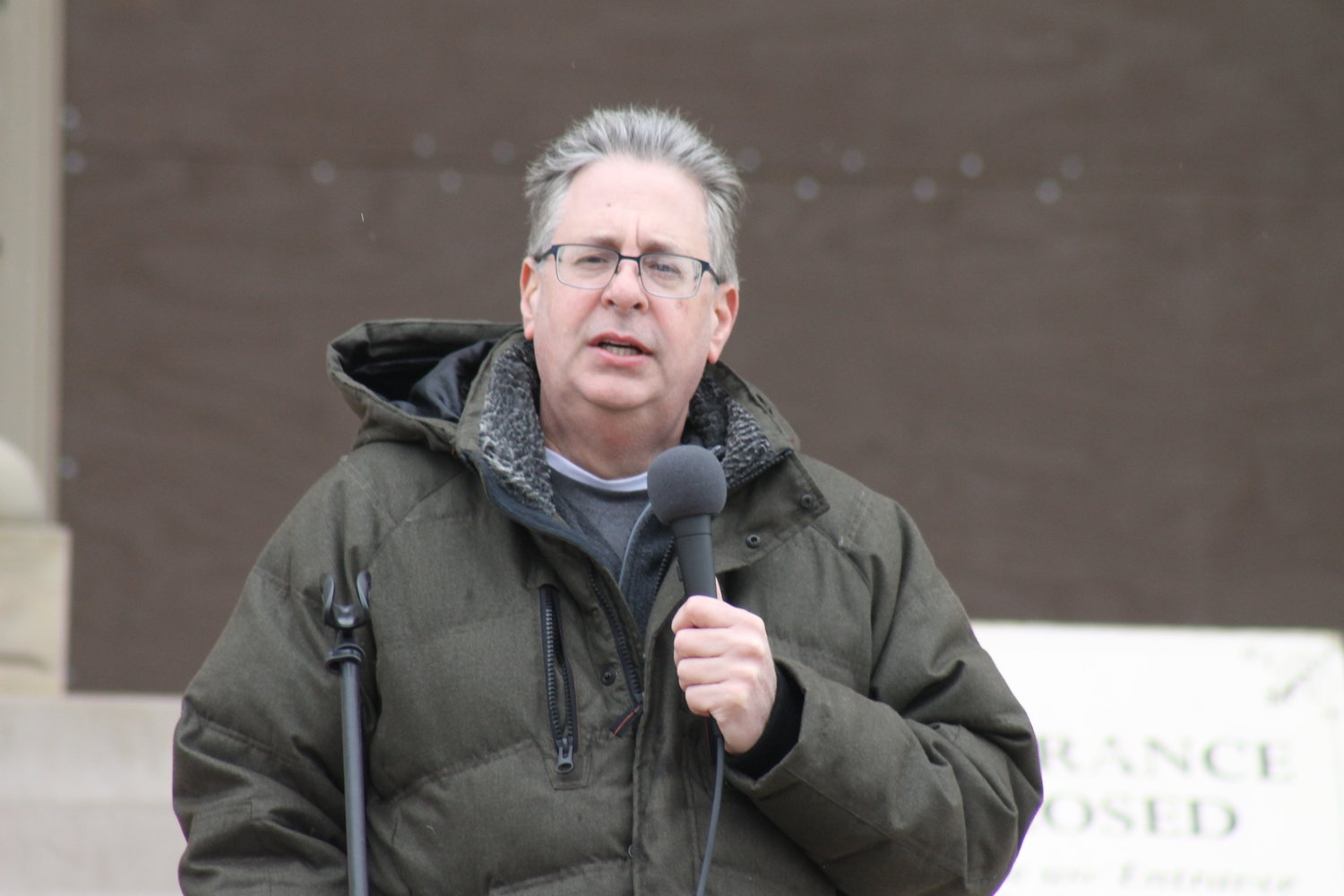 Matt DePerno, a Republican candidate for Attorney General, claims election fraud — widespread fraud — has been found throughout Michigan. State election officials have said 250 audits have been completed of the 2020 election and no irregularities were found. A GOP controlled Senate Oversight Committee report concluded the same and chastised DePerno and others of financially benefitting from the false allegations of election tampering.
City Pulse/Todd Heywood 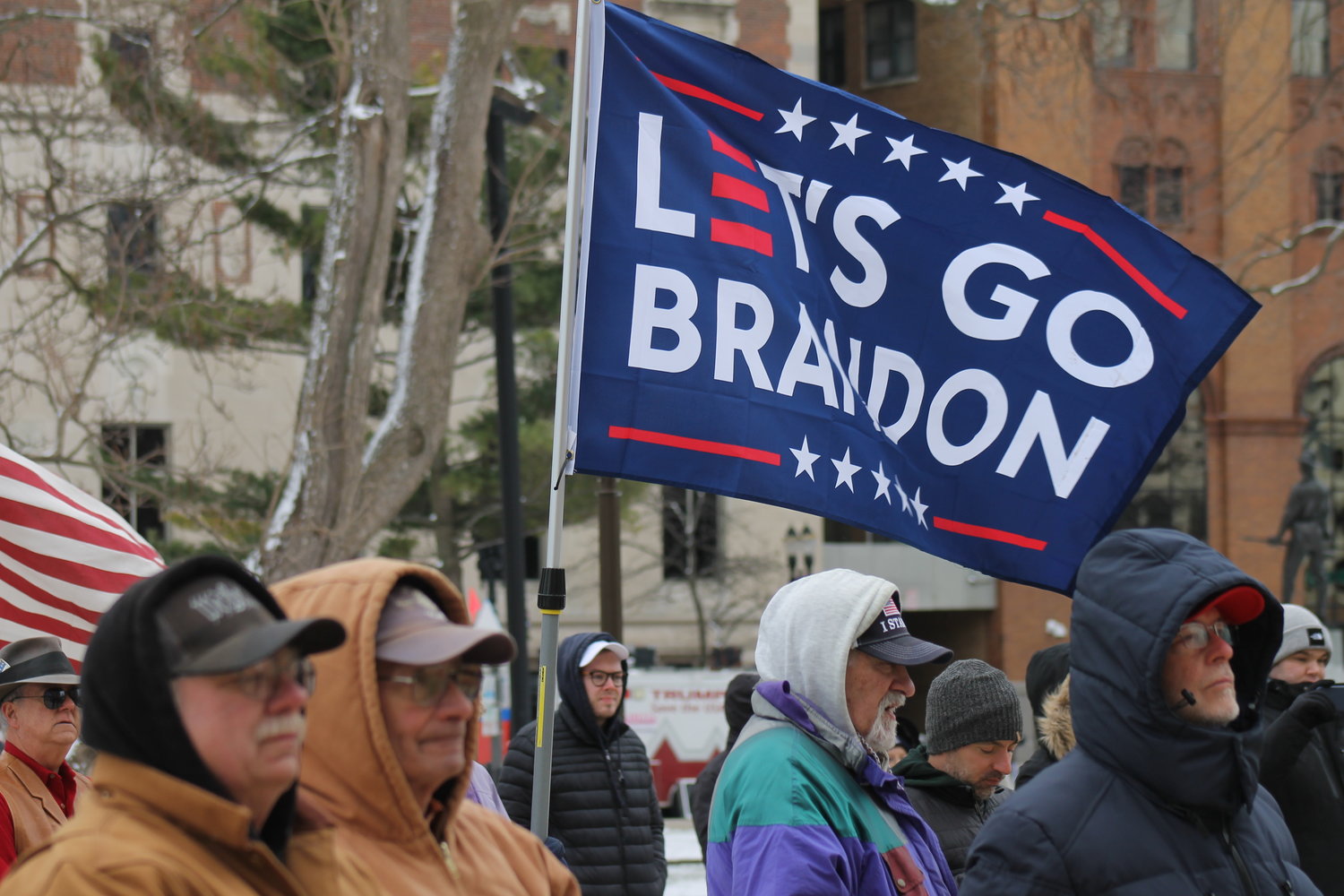 A rally goer braves freezing temperatures on Saturday (March 26) to support election conspiracies. The flag is a reference to an erroneous translation of a NASCAR chant by a commentator. The actual chant was "Fuck Joe Biden."
City Pulse/Todd Heywood 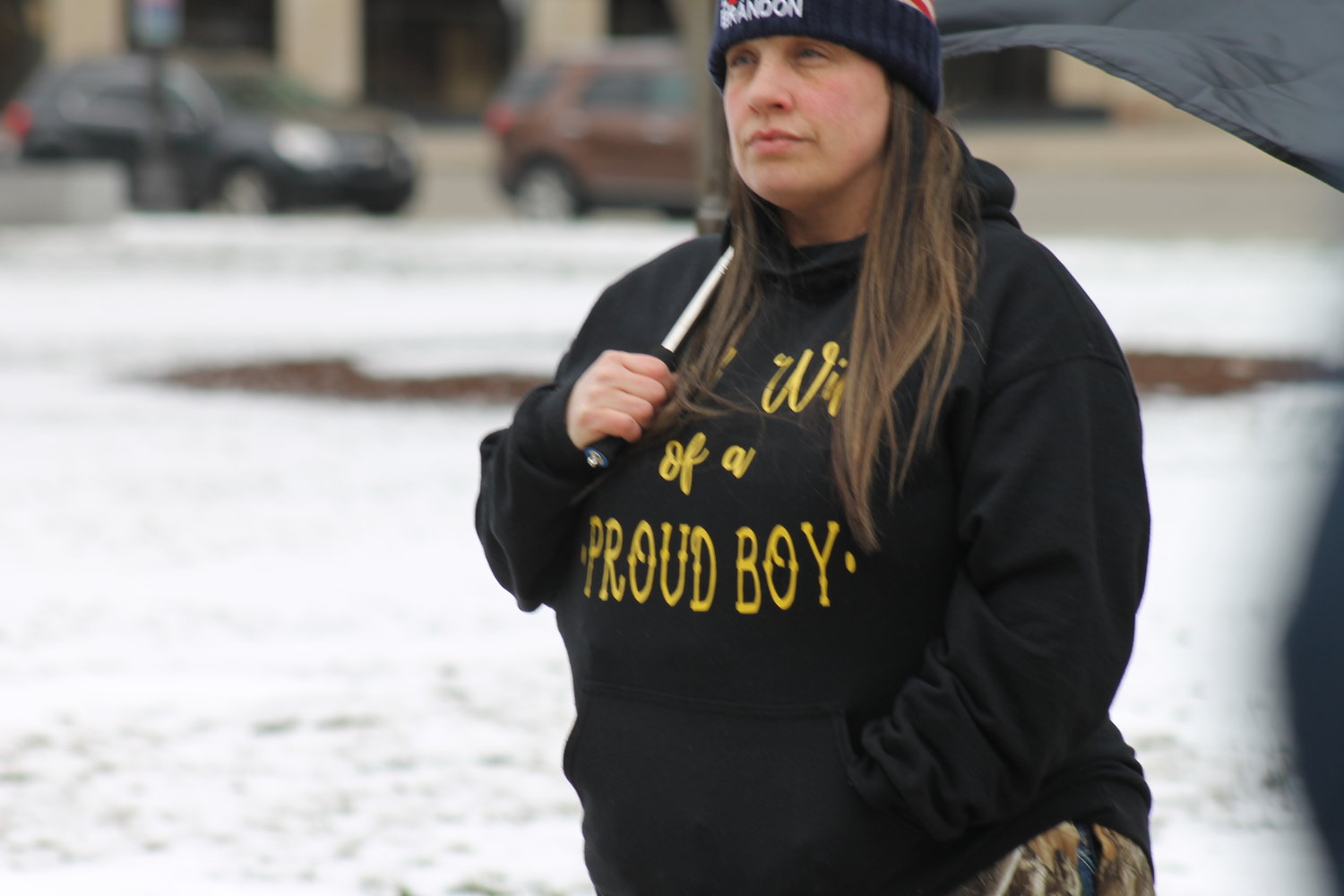 A woman at the rally is a proud wife of a member of the Western Chauvinist group Proud Boys. Some members of the organization have been charged with conspiracy for their roles in the Jan. 6 2021 insurrectionist Capitol riots.
City Pulse/Todd Heywood 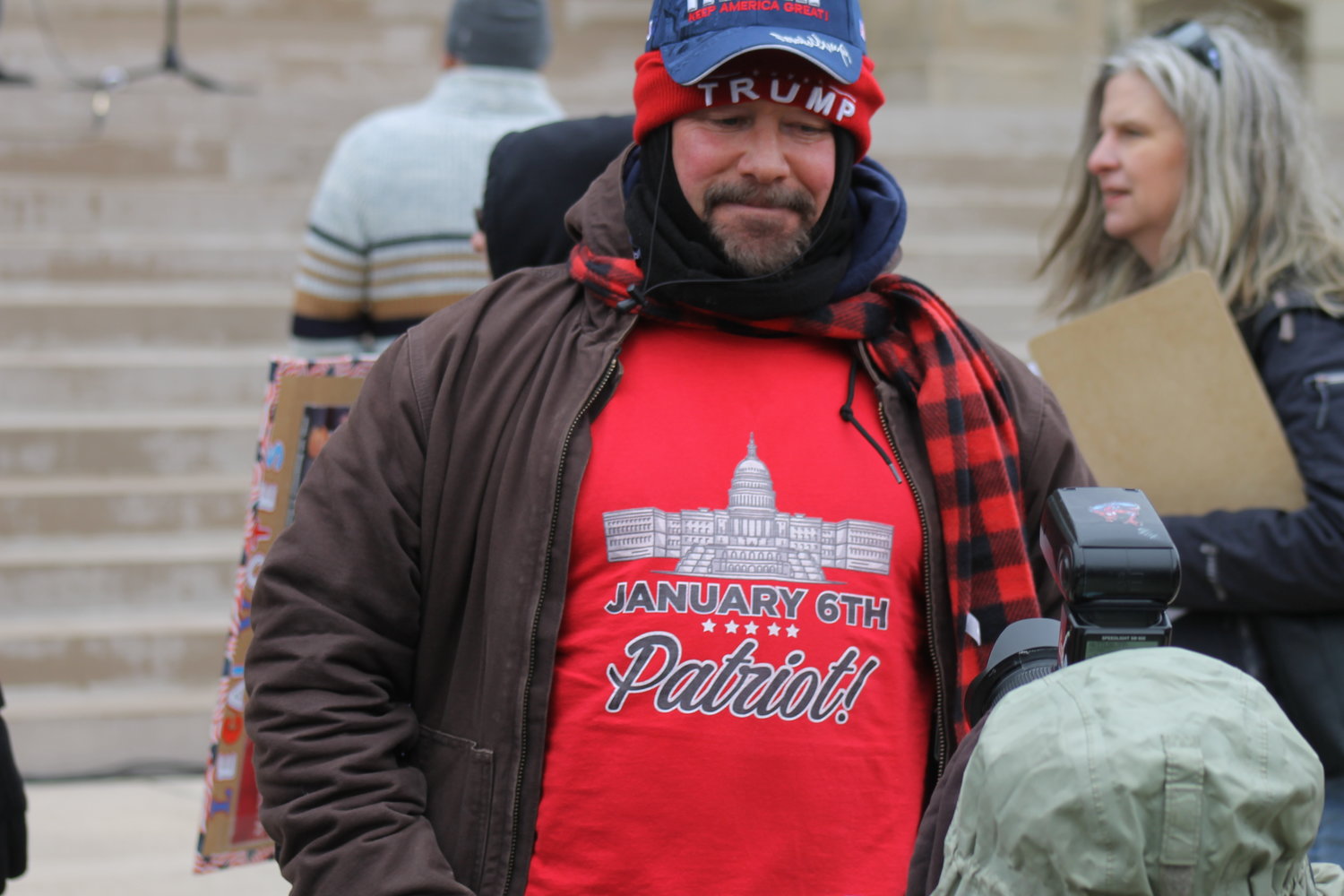 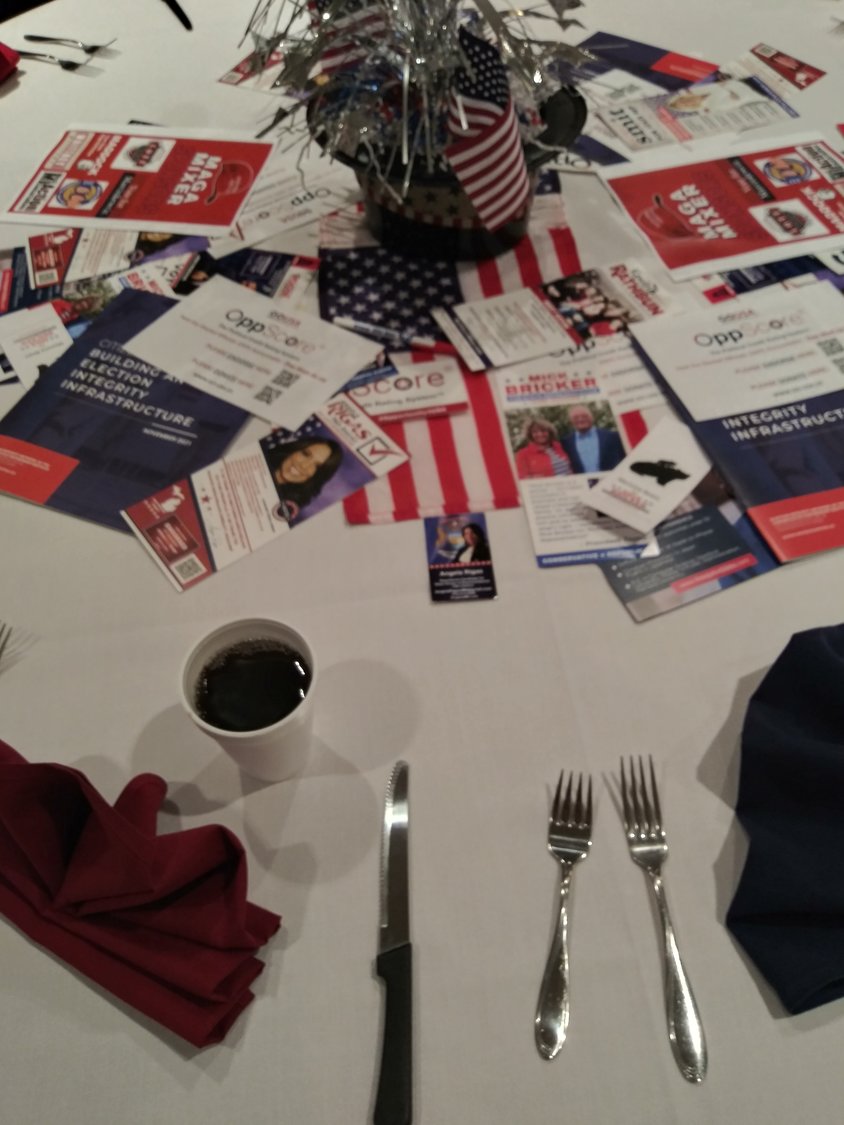 Tabletops were covered with political literature at the MAGA Mixer.
City Pulse/Todd Heywood 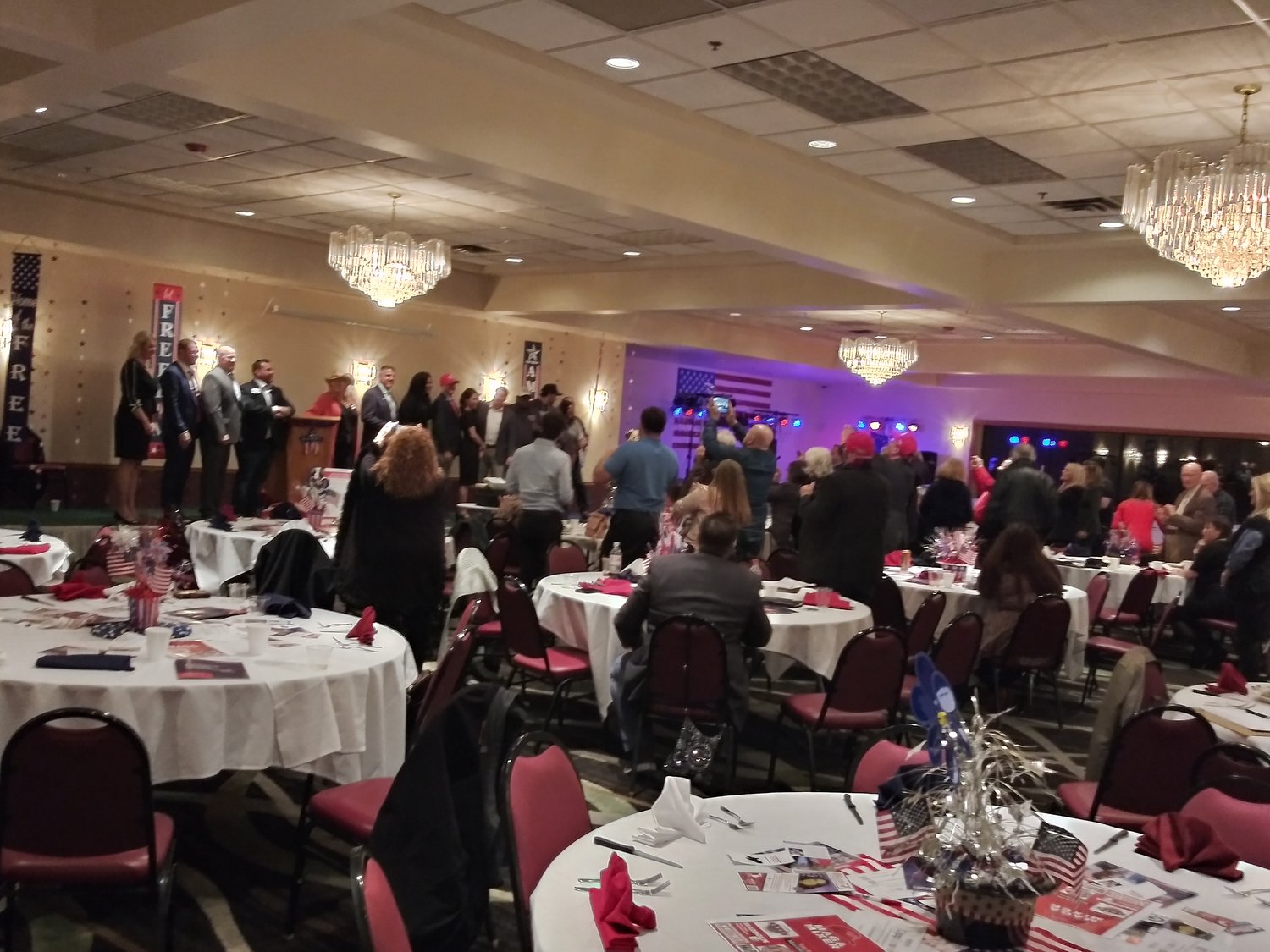 The end of the MAGA Mixer featured all of the candidates for state office who have been endorsed by former President Donald Trump. The event was heavy on security, including at least one security officer with a gun in his waistline.
City Pulse/Todd Heywood 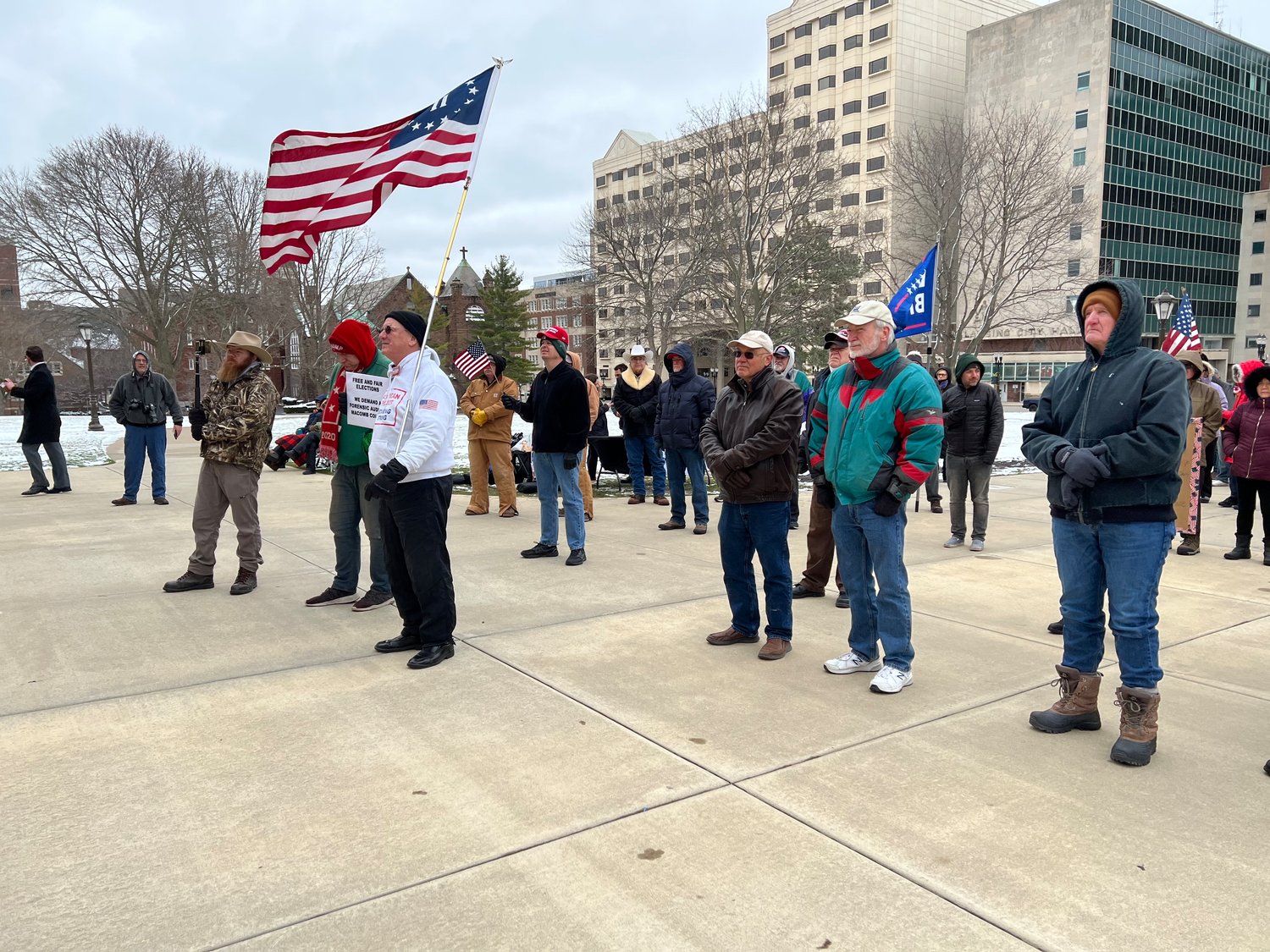 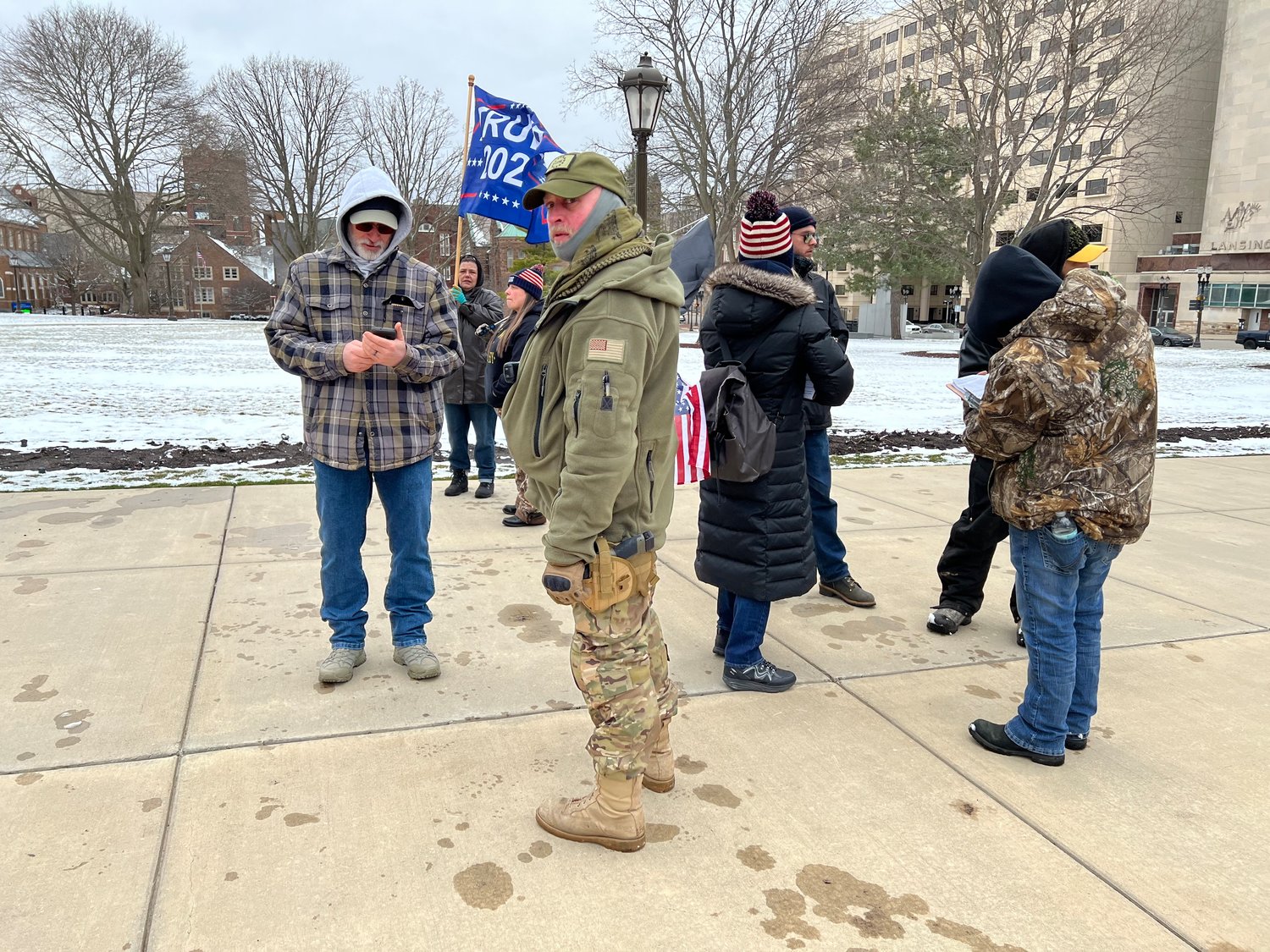 One man, pictured in the camouflage with a firearm at his side, identified himself as "head of security" at the rally and demanded this photo be deleted.
City Pulse/Kyle Kaminski
Posted Sunday, March 27, 2022 2:19 pm
Todd Heywood

SUNDAY, MARCH 27 — City Pulse sent a reporter to suffer through the election conspiracies and freezing cold of yesterday’s MAGA rally at the State Capitol and the mixer that followed at Royal Scot Golf & Bowl so that you didn’t have to waste your time. Here are eight takeaways:

Despite touting the event as a major rally featuring candidates endorsed by former President Donald Trump, the rally at the steps of the Capitol yesterday afternoon was only able to draw in about 65 people to stand on the snow-covered ground in the freezing cold. But they brought lots of flags, Trump stuff, and, of course, an abundance of conspiracy theories to appease everyone.

How many trucks make a trucker convoy?

That’s how many semi-trucks participated in the much-talked-about appearance of the so-called “People’s Convoy” to oppose COVID-19 vaccine mandates, election fraud and who knows what else. But those truckers had nine — count ‘em all — NINE passenger vehicles with them. All were festooned with American flags, and they honked their horns through mostly empty streets.

One woman in the crowd at the steps wore a sweatshirt boasting that she is a “Proud wife of a Proud Boy,” alluding to the western chauvinist white nationalist group. Some of those members have been charged with conspiracy to obstruct an official proceeding of Congress — you know that silly certification of the Electoral College vote on Jan. 6 that led to an insurrectionist riot and hundreds of federal indictments against defendants from nearly all 50 states.

There was also an American flag with the Roman numerals “II” in the center of the 13 stars — a Tea Party throwback calling for a “Second American Revolution.” Of course, there was a genius at the Capitol proudly displaying his “January 6th Patriot” sweatshirt for eager photographers.

John Paul Moran, the head of Grand Opportunity USA which co-sponsored the MAGA Mixer, couldn’t help himself with proudly announcing that he was a “gay dude.” That followed with opposition to “identity politics” and a tirade against equality for transgender people — calling the concept “radical gender bullshit agenda” and then declaring that “it has no place in our schools.”

Moran also told Mixer attendees that he’s writing a global “bill of rights” that will finally define a man and woman so all this crazy transgender stuff stops. Even the losing GOP Congressional candidate’s Transgender and gay friends agree with him on it — so you know it’s the real deal!

An armed man who identified himself as “head of security” at the Capitol rally demanded that multiple photographers — including Managing Editor Kyle Kaminski — stop taking photographs and delete those in which he was pictured. Since the rally was obviously public and there’s no expectation of privacy in the middle of the sidewalk near the Capitol lawn, he didn’t comply.

By the way, City Pulse was initially denied media entry to the MAGA Mixer at the bowling alley because organizers said they wanted “only friendly media” in the room. So, City Pulse bought a ticket and I decided to go anyway — sitting in a room with about 75 people who listened to the Trump candidates, munched away on rubber chicken marinara and paid for their own booze.

And yes: I came back with photos and audio from the event. I guess Royal Scot isn’t Las Vegas.

The staff told the crowd that the bowling alley was a “Christian” business that fought the COVID-19 restrictions from the state and won. It was an odd sentiment, considering the company reached settlement agreements with both the Michigan Department of Agriculture and the Michigan Liquor Control Commission wherein it temporarily lost licenses and paid fines.

They sure showed them big, meany-face government types!

The New World Order is coming.

Patrice Johnson, chairwoman of the Pure Integrity for Michigan Elections, blathered on a bit like a 1990s Militia adherent about the evil “New World Order” that President Joe Biden mentioned during a speech last week in Europe in reference to the loss of democracy in Ukraine.

But Johnson flung the words out like the black helicopters and UN troops were massing on the border of Eaton County to round us all up for the internment camps over in Grayling. Fear not dear patriots: She soothed an unimpressed crowd with notice this was the “Great Reset” — which is another framing of the New World Order, according to the Anti-Defamation League. She promised that it’ll surprise all those elites when “we the people” finally take back elections.

Johnson claimed that her group knocked on 71 doors, spoke to 35 residents and collected 23 affidavits that showed false information from the election in East Lansing on March 5, 2020. She touts these “shocking” revelations and “noteworthy problems” on the group’s website.

Byrum encouraged anyone contacted by such groups to contact their local or county clerk.

Election conspiracy master Matthew DePerno (who is also running for the Republican secretary of state against nomination) whined that State Rep. Cynthia A. Johnson, a Detroit democrat, should’ve been criminally charged for allegedly threatening violence toward Trump supporters.

Nevermind that the alleged threat was a doctored video that had been pushed out through right-wing echo chambers until a Honduran YouTuber capitalized on it and made some cash while trashing Johnson’s reputation. Johnson was also booted from committees by former House Speaker Lee Chatfield, along with condemnation by fellow Democratic leaders.

DePerno was whining about this injustice because a Republican-controlled Senate Oversight report on election conspiracies found that he and others were pushing false information to pad their pockets and should be criminally investigated by Attorney General Dana Nessel.

Nessel, a democrat, was a frequent target throughout the day’s events, with random calls to “Lock her up!” and during the MAGA Mixer, a call to put Gov. Gretchen Whitmer in Gitmo.