No conflict yet over a possible action against the Police Department, board rules 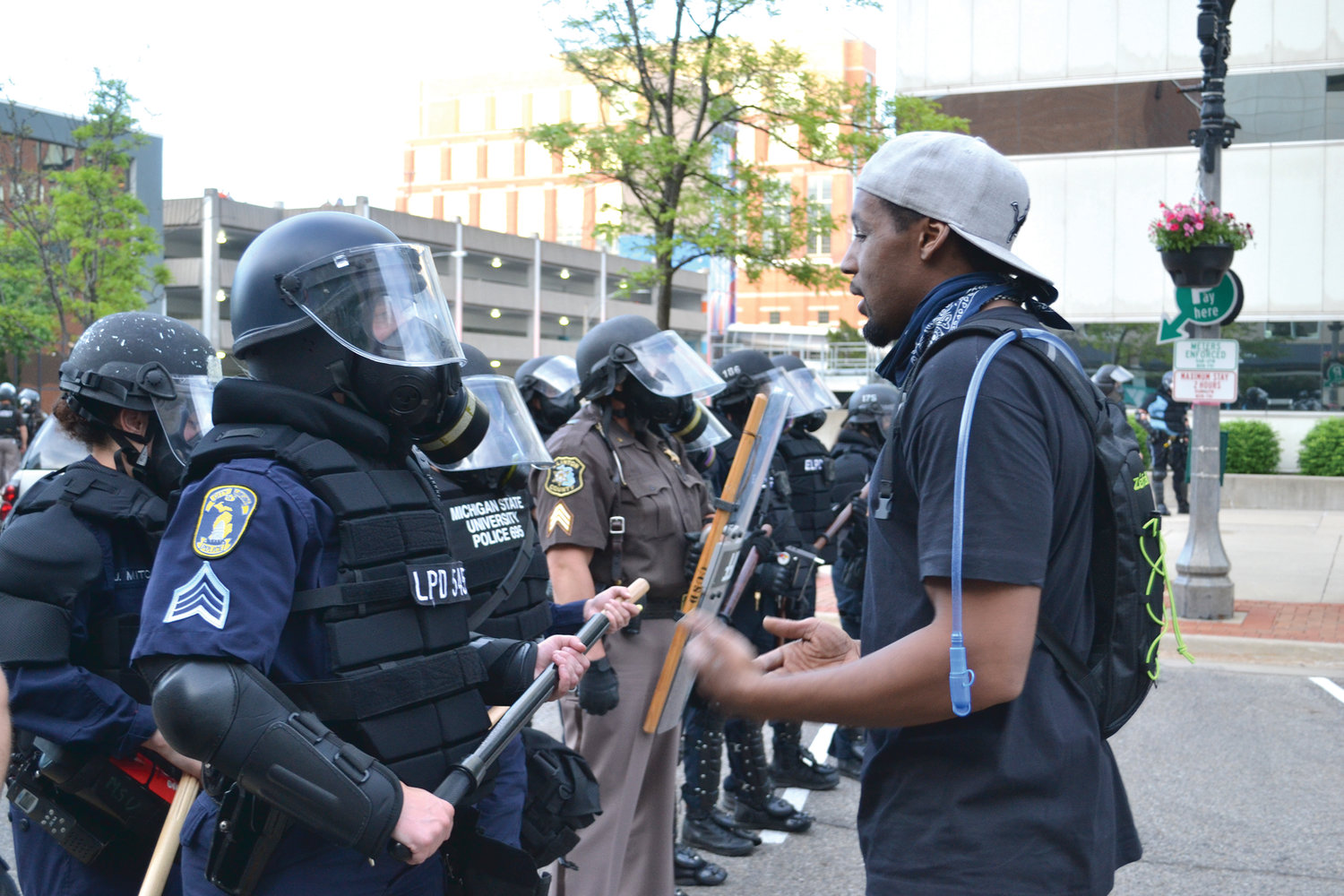 A protester speaks to a police officer on Washington Square after the first round of tear gas had cleared.
Skyler Ashley
Posted Friday, April 15, 2022 1:24 pm
Kyle Kaminski

FRIDAY, April 15 — Lansing’s Ethics Board has decided to take no issue with a member who is an attorney remaining on the board while he contemplates a federal lawsuit involving “potential constitutional violations” against the city’s Police Department on behalf of an unnamed client.

An affidavit of disclosure filed with the City Council last month by Brendon Basiga, a criminal defense attorney, revealed that one of Basiga’s clients has a “potential lawsuit” coming against LPD. And because it’s “likely” to end up in federal court, Basiga was worried his presence on the board may pose a conflict of interests, according to his affidavit.

“There may be a semblance of impropriety if and when this potential lawsuit is filed,” Basiga wrote, adding he was seeking the board’s “guidance” on how to proceed as a board member.

Four other members of the seven-member board decided unanimously — with Basiga abstaining —  that no conflicting interest or ethics ordinance violation could exist until the hypothetical federal lawsuit was actually filed.

“Maybe that’s the best course of action: Just wait until if and when there’s a complaint filed and we revisit the issue when we know more details,” said board member Keith Kris. “As it stands now, there’s not a lot we know. There’s not a lot we can know due to attorney-client privilege.”

Citing attorney-client privilege, Basiga has declined to name his client or provide any additional details about the nature of the potential claim against the Police Department. Henoted that it hasn’t yet been filed and that it has no relation to any other litigation in which he is involved.

City Pulse reported last week that only one of Basiga’s active federal cases had involved the LPD, according to court records. Basiga is the appointed attorney for Arnon Lake, one of 16 people who were arrested and charged last August in what has been labeled as one of the largest drug busts in city history. That case, based on Basiga’s comments to the board this week, is totally unrelated to the potential litigation against the city and its Police Department.

Basiga’s affidavit noted that he would “loathe” to resign from the Ethics Board but would if the other six members “feel that this potential lawsuit is so serious of a conflict.” Alternatively, Basiga also offered to recuse himself from any decisions regarding the LPD or the litigation.

Neither measure was found to be necessary  now. The board voted to place Basiga’s affidavit on file and requested that he submit another copy for review if and when he can disclose more details about the potential conflict of interest.

Basiga noted that his client’s lawsuit would “likely” be filed in the U.S. District Court for the Western District of Michigan. A review of case records shows that it still hasn’t been filed. Basiga said if it’s filed, he’ll send a copy of the complaint and a new affidavit to the Ethics Board.

“My intent with filing this affidavit was to start this conversation early, or at least put the board on notice that this may come down the pike here,” Basiga told the board.

The board is designed under the City Charter to review “issues which may arise concerning questions of standards of conduct for public employees.  It also deals with conflicting financial interests of elected and appointed officials and complaints related to the city’s ethics ordinance. Last year, for instance, it weighed in on whether former Councilman Brandon Betz crossed the ordinance in sending a series of profane text messages.

(He didn’t, but Betz resigned anyway.)

“It’s obvious to me that if this were to come before us for any reason, then you’d have to recuse yourself,” said Board member John Folkers. “We’ve had people do that in other situations.”

The Council appoints four members of the eight-member board, which has one vacancy. The mayor appoints the other four, which includes Basiga. In a statement, Schor said the City Attorney’s Office is reviewing Basiga's disclosure. Assistant City Attorney Mary Bowen attended the Ethics Board meeting this week and didn’t voice concerns either before or after its decision.

“I mean: Without more information, it’s hard to comment,” she said. “I’d imagine if more things progress, like you know, in the event that you’re able to disclose more information, then of course you would do that and refile your affidavit.”

Basiga is a former Meridian Township prosecuting attorney. He works as an appointed criminal defense attorney and was an adjunct professor at Thomas M. Cooley Law School until 2017.