Father of ex-House speaker did not report child abuse allegations 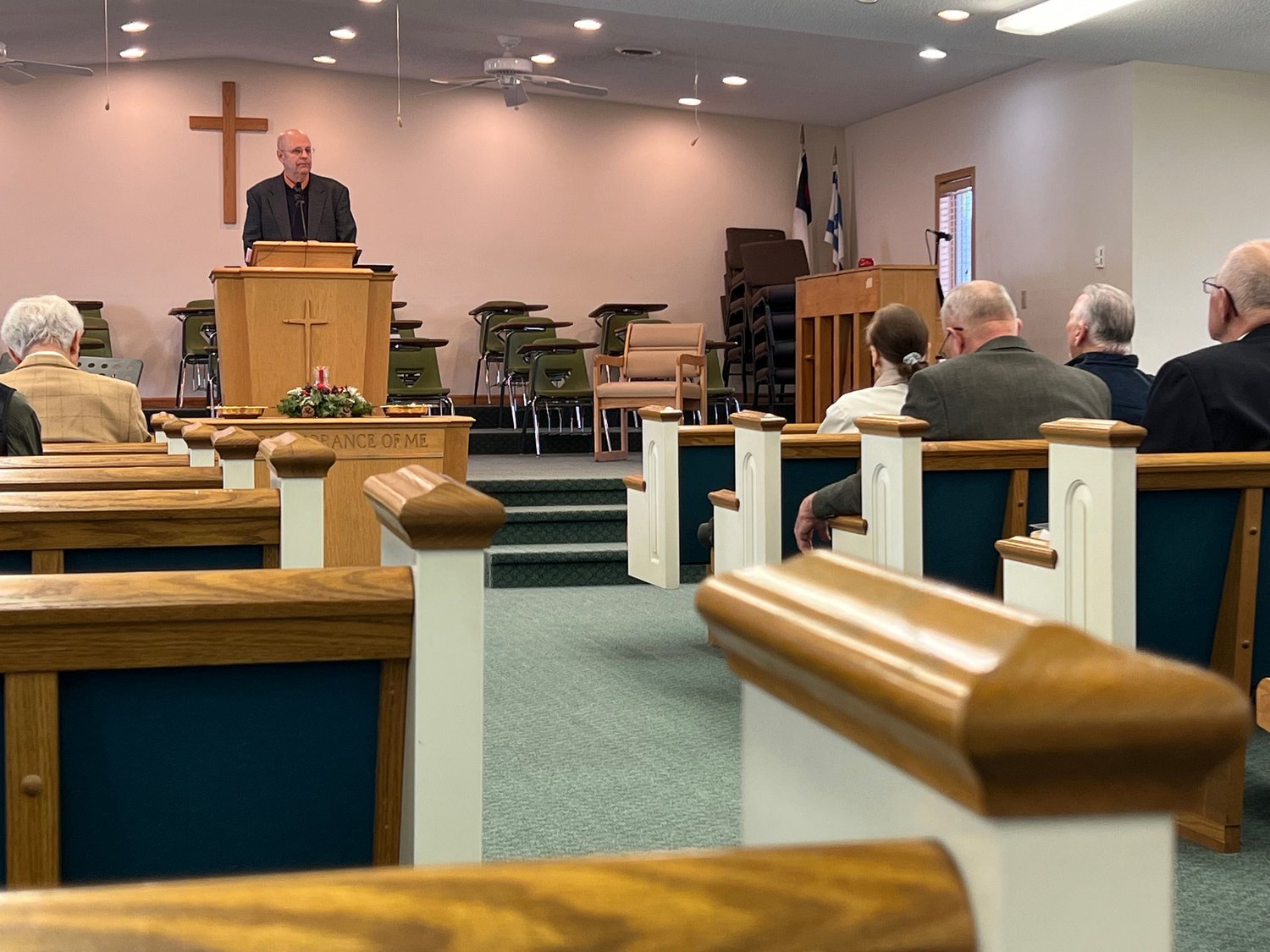 THURSDAY, Jan. 27 — Rusty Chatfield, the father of former state House speaker Lee Chatfield and superintendent of the Northern Michigan Christian Academy, did not report allegations of unwanted sexual touching last year between two 11-year-old students, according to a police report from the Tuscarora Township Police Department obtained by City Pulse.

Instead of calling local law enforcement or the Michigan Department of Health and Human Services’ child abuse reporting line, Chatfield brought the accused 11-year-old student to his office, the report showed. The boy admitted to the sexual touching — which included “the inner thigh, the penis and the buttocks” over the clothing, according to the police report.

Chatfield made the boy apologize to the victim, the police report said.

Then, Chatfield ordered the two 11-year-old boys to be separated at all times in the school and advised the alleged victim to physically “beat up” the accused if he touched him again, according to an interview documented in the police report between authorities and Chatfield.

As a superintendent, Chatfield is a mandatory reporter of abuse and as such “could report any instance of suspected child abuse or neglect,” according to MDHHS spokesman Bob Wheaton. However, mandated reporters are generally not required to report abuse to Children’s Protective Services when the alleged perpetrator is another child, Wheaton told City Pulse in an email. Wheaton also described that lack of reporting requirements as a “loophole” in state law, which he said was designed only to allow CPS intervention when parents or others specifically responsible for caring for children are accused of abuse.

The Tuscarora Township Police Department was dispatched to investigate allegations of “improper supervision and failure to protect” students at the Northern Michigan school. Cops only became involved when a third party notified the state’s child abuse reporting line.

The victim’s mother, who does not want to be identified out of fear of reprisal from people associated with the church and school, said that she reached out to the  Focus on the Family, which describes itself as a global Christian ministry. She was troubled that the accused child remained in the school where he had access to other potential victims, she told City Pulse.

In turn, the conservative Christian family organization filed the abuse report because it determined it was also required to report child abuse allegations, the child's mother said. A spokesman from Focus on the Family said if officials believe a child is in danger, it will call the appropriate authorities. It could not confirm specifics for any case due to confidentiality.

The mother said she didn’t understand how Rusty Chatfield could “stand up there preaching against gays and let this gay stuff go on in the school.”

Chatfield has been a vocal opponent of LGBTQ equality efforts in Michigan. He attended several Michigan Civil Rights Commission meetings to oppose a proposal that had interpretted the state’s Elliott Larsen Civil Rights Act prohibition on sex discrimination to include LGBTQ people. That interpretation is pending before the Michigan Supreme Court.

The alleged child victim was removed from Northern Michigan Christian Academy on March 6, according to the police report and the mother. Tuscarora Township Police Chief Gordon Temple told City Pulse that he was uncertain whether the officer pursued an investigation into the failure to report. He said that he would ask the investigating officer for more information this week.

Temple also said he believed the alleged sexual conduct was “a type of criminal sexual behavior” but charges were not brought against the accused 11-year-old boy because the Cheboygan County prosecutor “would not have charged” the youth “because of the age.”

Temple also said he was uncertain over the legality of allowing the alleged victim to “beat up” his alleged abuser. Northern Michigan Christian Academy is “different” from other schools, he said.

“They are a private school and then you have corporal punishment there,” Temple explained.

The police report showed the accused boy’s father had given Chatfield explicit permission to use “physical discipline” on his son should he again inappropriately touch another student. That permission was provided on Feb. 24 — one day before the local police investigation began, and a full seven days after the incident was first reported to Chatfield and other school officials.

Chatfield’s son, Lee Chatfield, made roadblocks to LGBTQ protections a cornerstone of his campaign for state representative in 2014, then telling the Petoskey News-Review that being gay was a behavior and that legally preventing discrimination based on a behavior was comparable to preventing discrimination against a person who wears cooked noodles on their heads. In that same interview, he defended the school’s corporal punishment policy, which allows school officials, with written parental permission, to use a paddle on a child’s behind.

Chatfield is at the center of another sex abuse scandal. His sister-in-law Rebekah Chatfield has accused him of sexually abusing her beginning when she was a 15-year-old student at NMCA when Chatfield also worked there a coach, teacher and athletic director. She alleged the abuse continued for years, even after she married future Speaker Chatfield's brother.

A criminal report detailing that alleged abuse was filed by Rebekah Chatfield with the Lansing Police Department and has since been forwarded to the Michigan State Police for investigation.

Lee Chatfield has acknowledged affairs with Rebekah Chatfield, but he has denied the sexual assault claims against him.

This is not the first instance of Rusty Chatfield and other NMCA officials being accused of failing to report sexual abuse in relation to church and school-affiliated activities. In 2004, a teenager accused a teacher of fondling her breasts and rubbing her “private area” through her shirt during a mission trip to Mexico. School and church officials were informed of the allegations in November of 2004, however, they did not report the incident to authorities as state law requires.

Tuscarora Township Police became involved on Dec. 29, 2004, after a Family Independence Agency official sent notification of possible abuse. The investigation stretched into 2005. Law enforcement did initial interviews on the allegations, but determined the case had to be referred to Texas law enforcement and prosecution because the alleged abuse occurred in Texas.

The department, however, did open an investigation into school officials who failed to notify and report the abuse to CPS as required by law. Among those investigated was Rusty Chatfield, who said that he did not believe he had to file a report because the abuse allegations fell under a clergy exemption, according to the police report. An officer then informed Rusty Chatfield that was no longer true, and that any time abuse allegations were brought to his attention he was required to file a report “immediately.” Chatfield agreed to fill out the required state reporting form and contact authorities in the future. But he said he “did not agree"  that the state mandated form "should be done in most cases due to the fact that anyone could make a report on anyone."

Mandated reporters who fail to file a report of suspected child abuse or neglect are subject to both civil and criminal liability, according to MDHHS. That includes the possibility of a misdemeanor criminal conviction that is punishable by up to 93 days in jail and a fine of $500.

(If you suspect anyone is being subjected to abuse or neglect, call Michigan's abuse hotline 855-444-3911 any time day or night. This reporting line is created to report abuse and neglect of children, elders and other vulnerable persons to state and local authorities to investigate. If you are experiencing sexual assault or abuse, call Michigan's Sexual Assault Hotline at (855)VOICES4 or text 1-866-238-1454. Both are anonymous and confidential.)