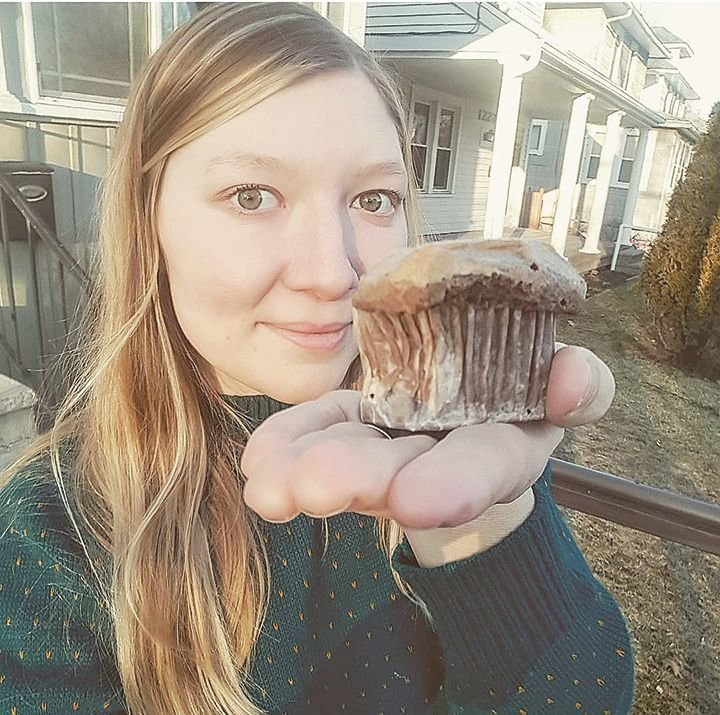 Before the coronavirus shutdown, Danielle Gyger was well known to frequenters of Mac’s Bar, thanks to her bartending gig. Now, she’s working with High Water Farms, one of downtown Lansing’s urban farms. But when she returns home, she gets to hangout with her favorite thing, a Betty Crocker cupcake she’s kept for more than eight years.

I made some cupcakes for a work function back in 2013. I had one left, and I like doing weird science experiments, and I wondered, ‘How long will this last until it grows mold?’ It never did. It just shrunk a little bit, and now it’s a petrified cupcake. I love it. It’s on my bookshelf, and it is one of my all-time favorite things.

It’s a chocolate cupcake with vanilla icing — just a run-of-the-mill Betty Crocker cupcake. I looked online and learned that there’s a ton of preservatives in it. It’s kind of a gross reminder of how many preservatives are in processed foods. This is the only food I’ve ever done something like this with. After a month went by, I realized no mold was going to grow on it. I thought it would be funny to put it on my shelf as kind of a weird little knick-knack.

I’m not a baker; I’m more a cook. I bought the Betty Crocker cupcakes because I needed to bring something, and I’m not good at baking, so I bought something that would be much easier than making a dish from scratch. I’m assuming if you made a cupcake from scratch, it wouldn’t hold up as well as this weird processed Betty Crocker one.

When people come over to my house for the first time, they notice that it’s displayed pretty proudly. Most people think it’s cool, but some people have been like, ‘Wow that’s really weird.’ My old roommate Lizzie would refer to it as my weird cupcake. I actually have a little museum shelf where I have a dead rabbit in formaldehyde, as well as an old bug — saying this out loud I feel like a weirdo — I also have my retainer from middle school. It’s a shelf of petrified oddities.

My favorite cupcake to actually eat is a red velvet cupcake with cream cheese frosting. My aunt makes me them for my birthday, every year since I was little. They are delicious.

Interview edited and condensed by Skyler Ashley. If you have a suggestion for Favorite Things, please email Skyler@lansingcitypulse.com