Flash in the Pan: Pasta Clemenza 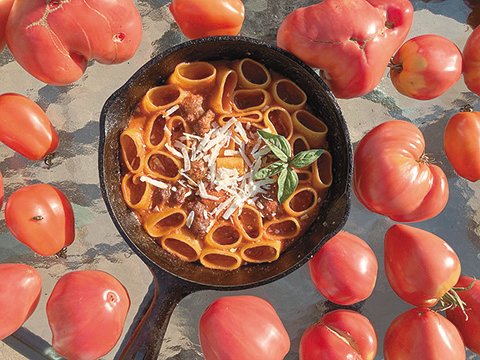 “Leave the gun. Take the cannoli.”

In “The Godfather,” by Mario Puzo, there is a scene where Peter Clemenza shows Michael Corleone how to make spaghetti and meatballs. Clememza was the smoothest character in the story, after the Godfather himself, of course, and quite possibly a better cook. That scene, especially in the movie, which is much more detailed, improved my pasta.

Clemenza was a jovial reaper. It is poetry in motion when he mixes business with pleasure, as a wedding dancer, a chef and as an orchestrator of hits.  Like on Pauli, for example, the driver who set up the boss. On the way home from their cannoli run, they pulled over so Clemenza could take a leak. He never got back in the car, which wound up covered in Paulie’s blood, thanks to Rocco in the back seat. They walked home and brought the cannoli, presumably ricotta-stuffed, to a room full of angry men and proceeded to cook them dinner. The Don was in the hospital with gunshot wounds, thanks to Paulie, and the men were preparing for war.

Clemenza pulled Michael Corleone aside to give his future boss some bits of unsolicited, if solid, advice on love and cooking. After telling the youngest Corleone to sing to his girlfriend, he says, “Come over here kid, learn something. You never know, you might have to cook for 20 guys someday. You see, you start off with a little bit of oil. And you fry some garlic. Then you throw in some tomatoes, tomato paste — you fry it and make sure it doesn’t stick. You get it to a boil, then you shove in all your sausage and your meatballs. Add a little bit of wine. And a little bit of sugar. And that’s my trick.”

At that moment in the story, Sonny bursts in. “How’s Paulie?” Clemenza kept stirring his sauce. “Oh Paulie? Won’t see him no more.”

A few decades later in Missoula, Montana, a certain Dadfather had problems of his own. No gunshot wounds to speak of, thankfully, but his two sons weren’t behaving in a manner befitting the children of a sensitive chef. They purported zero interest in dinner, from his kitchen, at least. Other kitchens had takeout, take-and-bake pizza, macaroni and cheese and Chef Boyardee. These are a few improvements to the Dadfather’s fare, where no dessert is served until salad is swallowed and the cooked food is often too chunky.

The Dadfather had to dig deep up the sleeve of his white sleeveless undershirt, which looked like the shirt he imagined Clemenza wore, to find the classic movie character’s trick. Using the fresh tomatoes of summertime, he took care to ensure the spaghetti was thick with meatballs and the sauce was not chunky.

It was a pasta they couldn’t refuse.

When you haven’t gone to the mattresses and you have the time, you don’t need paste and canned tomatoes, especially when they’re in season. Either way, this dish really hits the pasta spot, especially in the middle of winter with some sauce you froze this coming week. Serve it with a lusty red and eat it until you feel as round as Clemenza’s belly.

Herbs: oregano, thyme, and sage, about ¼ cup of fresh, chopped, or two tablespoons worth of dried

One pound of dry pasta. They used boxes in “The Godfather.” I use bags of fancy pasta, dried in cold air and imported from Italy

Six quarts water plus 1 tablespoon of salt (or stock)

Trim and core the tomatoes and slice them in half, tip to core. Lay them on baking sheets, with garlic interspersed, drizzled with a few tablespoons of oil and a teaspoon of salt. Preheat the oven to broil. Place the sheets in the oven. Rotate the trays every five or so minutes, so they all cook evenly until the skins, facing upward, begin to wrinkle and start to blacken – about 20 minutes. Remove the trays of tomatoes. When they are cool enough to work with, pull off the skins.

Fry the onions in a half cup of olive oil in a heavy bottom pan. When they are translucent, add the tomatoes and the water in the baking pans. Add the herbs. Simmer for about an hour, stirring often to make sure it doesn’t burn. If it burns, don’t scrape the burnt stuff into the sauce — change the pot.

Season to taste with salt and perhaps more herbs. When it tastes good, turn it off and let it cool to room temperature. There is an argument to be made for cooking it all day and then letting it sit overnight. I’m in favor of less cooking, especially with fresh ingredients. Cook until it tastes good and call it good. It will keep cooking as it cools. And then you should let it sit overnight in the fridge.

The next day, blend it until smooth, and then filter out the seeds with cheesecloth or a thin mesh strainer. You now have a velvety smooth, not chunky, sauce – much more than you will need to accompany a pound of pasta. The sauce freezes well in quart freezer bags, stacked flat on their sides.

Toss the noodles in olive oil and crushed garlic and add them to the pan with the meatballs. Sauté for five minutes. Add two cups of sauce per pound of pasta (or whatever seems right with the amount of noodles you made). Simmer the noodles and meatballs gently in the sauce until the noodles are to your liking. Garnish with grated cheese, fresh basil, red pepper flakes (if you like) and serve.