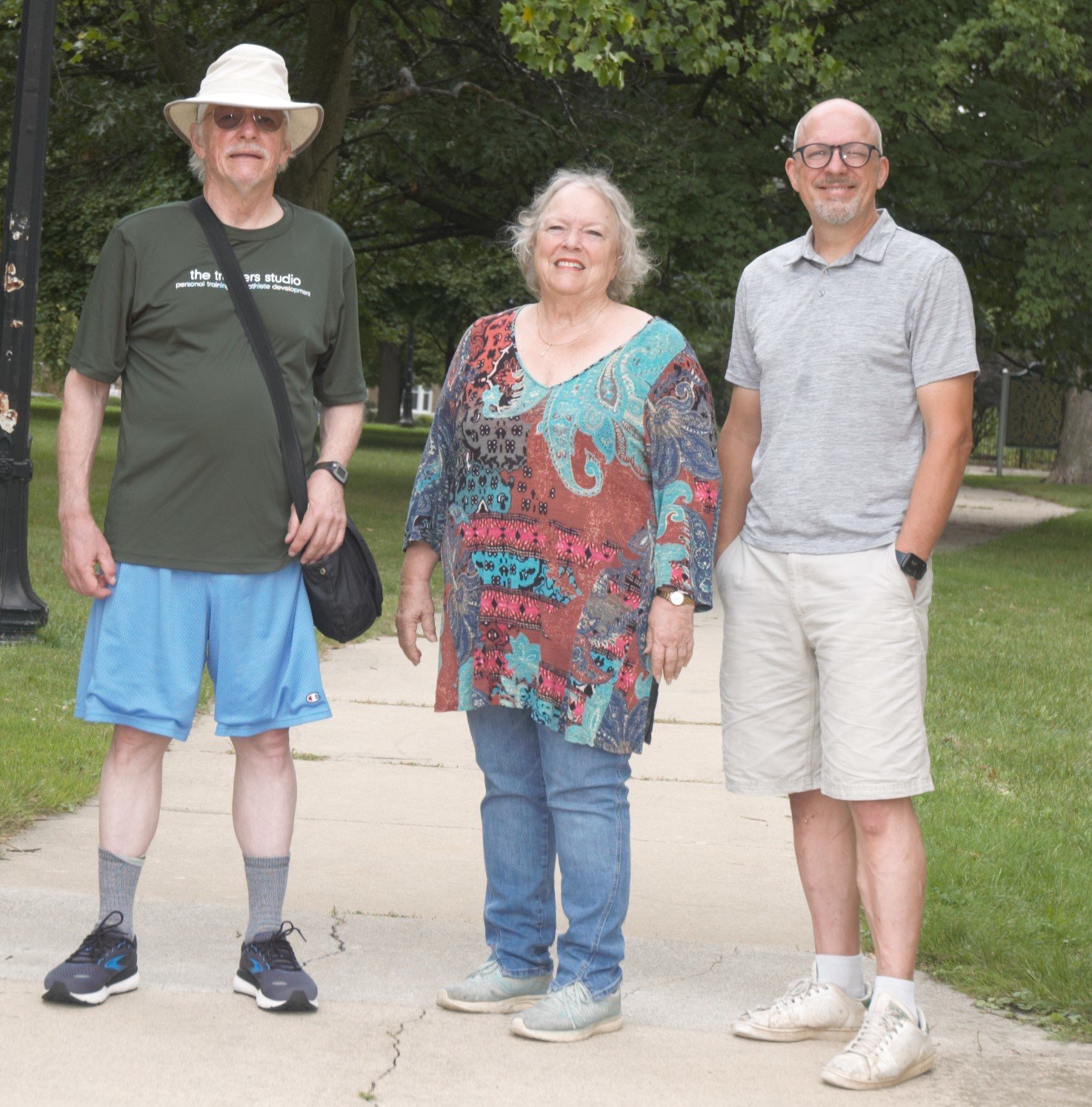 Diane Sanborn and Friends of Durant Park board members Paul Pratt (left) and David Palme hope to raise $10,000 this month to build a permanent stage in the Lansing park.
Dawn Parker for City Pulse
Posted Thursday, September 8, 2022 12:00 am
Dawn Parker

It would be the only fixed stage built in a Lansing city park. It would mean weekly summer concerts would be the norm, instead of just once during the summer on a traveling stage if Walnut Neighborhood residents are lucky.

Diane Sanborn, a Lansing real estate agent, also the proprietor of Cozy Koi Bed & Breakfast, has pursued a vision for Durant Park – her neighborhood park – for more than two years. The park runs along Saginaw Street between Washington and Capitol avenues.

Sanborn chairs the Friends group and serves as its treasurer.  She lives one block from the park and goes on twice-daily walks there. All in all, her involvement with the park dates back more than a decade.

Sanborn and friends have corralled $40,000 of the $60,000 cost of the structure, which would measure 16 feet by 24 feet when completed. All that’s left is to come up with $10,000 by Sept. 26. If successful, those dollars would be matched by the Michigan Economic Development Corp.

Among that $40,000 are gifts from the city of Lansing, Lansing Rotary and Consumers Energy.

With all the needed funds in, Sanborn and friends could get to building. Fundraising is slow going so far, though, with a paltry $100 pledged in the campaign’s (patronicity.com/stage) in the first nine days.

Sanborn is confident people will respond, especially as they think about who will use the space.

“It will be available for anyone to use as long as someone else isn’t using it,” she said.

Lillian Werbin, co-owner and president of Elderly Instruments, also sits on the board of the Old Town Commercial Association. Between those responsibilities, Werbin said she is both in touch with and knows a large group of people who bring events and people to Lansing.

“The more venues available, the better,” she said.

While Elderly Instruments puts on regular in-house concerts, Werbin acknowledged showroom space is limited, especially when there are instruments on the walls.

“You can’t pack it to the brim,” she continued. Out of doors, where capacity is less of an issue, looks pretty good.

“It would be nice to have something down the street to use,” Werbin said. Durant Park is just a mile from Elderly’s home on Washington.

The acoustic music scene, both locally and statewide, remains rich and vibrant with frequent concerts and festivals.

“Michigan is a really good place for music, Werbin said. “That’s another reason this stage is a good idea.”

The proposed site for the stage has its own draw.

Durant Park, marked by a distinctive arch built in 1924 at the corner of Washington and Saginaw, is one of Lansing’s oldest. Automobile pioneer William C. Durant, a co-founder of General Motors, gave the land to the city for the park in 1921, and a Michigan historic marker in the park indicates its significance.

Getting the stage built would be one way for the community to celebrate the park’s centennial, albeit a year late. Although those festivities might pale in comparison to the original gift, which the city of Lansing observed by shutting down for a day and throwing Durant a parade.

The Friends of Durant Park group has worked diligently to obtain grants toward the project’s cost and had hoped to stage a big centennial celebration of the park in 2021.

“We got a little bogged down with the pandemic,” Sanborn said. The group’s goal had been to finish the stage in time to put on a delayed celebration this summer, but that was not to be.

The stage will be oriented toward the back of the park, so that the sound from any performance will carry toward the playground area. The structure will, of course, have electricity for lights and sound.

“People can either sit in a sunny area or a shaded area right in front the stage or be with their children on the playground and still hear what’s going on because the sound will carry,” Sanborn said.

“Provided they have good enough speakers, of course!”

The group had the confidence to hire an architect, have a model made and have plans approved by the city, all of which has been done.

“All we need is the money. If you build it, they will come,” she said with a laugh.

The park may be christened next year with a very special event, a taco-related sampling. If it takes, it may be the successor to Lansing Board of Water & Light’s Chili Cookoff.

Durant Park would host bands – on the stage, of course – along with a food tent, a VIP tent and food trucks on the park’s perimeter.

Using the stage for such an event, Sanborn said, would “(bring) more people to the park, to know the history of it, and Billy Durant and what he did for Lansing.”