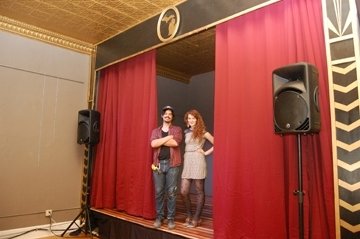 Posted Wednesday, July 29, 2015 12:00 am
Ty Forquer
Lansing’s newest performance art space opens this weekend with a debut celebration at the Robin Theatre Friday and Saturday. The new theater space is the brainchild of Dylan Rogers and his wife, Jeana- Dee Allen. Locals may recognize Rogers as the ring master in charge of the musical circus known as the Lansing Unionized Vaudeville Spectacle. The duo purchased a REO Town storefront last year, which they have transformed into a space dedicated to performing arts.

“These last few months have been crazy,” said Rogers. “I’ve never worked on anything so hard in my life.”

The year-long project is a floor-to-ceiling renovation of the REO Town space. The couple installed a performance stage — complete with hardwood floor, floor-to-ceiling curtains, a black and gold art deco-influenced proscenium and a trap door — as well as audience amenities like a second restroom and drinking fountains.

The building itself, built in 1917, was originally a grocery store. Since then it has housed a variety of businesses, including a candy shop, an insurance agency and an antique store. Graffiti in the building’s basement betrays its most recent past life as a marijuana dispensary.

“We’ve been chipping away at it for a year,” Rogers said. “We go to work, then come home and work on the building until midnight.”

“It’s not as romantic as everyone thinks,” added Allen. “It’s a lot of hard work.”

The theater is just one more step in the gradual reinvention of REO Town, the long dormant stretch of Washington Avenue south of downtown Lansing. Allen remembers biking through the neighborhood a few years ago when she was working for REACH Studio Art Center and seeing a very different neighborhood.

“All of it was empty,” she said. “Almost everything has changed hands since then.”

Eateries Good Truckin’ Diner and Saddleback Barbecue recently set up shop in the neighborhood, and barber Paul Trowbridge opened up the Cuttin’ Up barbershop at the end of 2012. Riverview Church has taken up residence in the sprawling former Cadillac Club space, and AA Creative Corridor hosts a bustling slate of social events, art exhibits and theater performances. Lansing Economic

Area Partnership moved its offices into the neighborhood in 2013, and New Horizons Computer Learning Center opened up Co:Space, a collaborative office space, in 2014. Even the gritty REO Town Pub has reinvented itself as a craft beer outlet.

Meanwhile, the City of Lansing has invested significantly in the neighborhood. The $182 million BWL cogeneration plant has brought a daily influx of workers to the neighborhood, and an extensive Washington Avenue road project — including widened sidewalks and lush, plant-filled medians — has made commutes through the area much more pleasant.

“REO Town is redefining itself,” Allen said. “I’m interested to see where it goes.”

Rogers still sees a lot of gaps in REO Town’s offerings, however, but is trying to fill a niche where he can.

“REO Town needs a grocery store and more cafes,” Rogers said. “Those are higher on the list of needs than a community theater, but I’m not the guy to do those things.”

Allen finds some inspiration in the neighborhood’s namesake, Ransom Eli Olds. Olds founded the defunct REO Motor Co., which operated a out of a sprawling factory complex just a few blocks south of the theater.

“We want to honor that legacy of people who built things with their hands,” Allen said.

The duo has used this project to back up those words, inviting friends and community members to join them in the renovation process.

“We’ve had the opportunity to teach our friends these skills, how to hang drywall, how to install a sink,” said Allen. “Everyone is learning these skills they don’t teach anymore.”

Rogers hopes to host a variety of events in the space, including music, theater and social gatherings. The space also has tracks installed to allow easy hanging of artwork. One of the first events Rogers and Allen hosted in the space was an exhibition by LCC photography students in May.

“We’re first and foremost a performance art space,” said Rogers. “But we’d like to fill the space with beautiful things.”

The duo is already amazed at the interest the space has garnered, even before this weekend’s official opening. They think it’s a pretty clear sign that Lansing is hungry for more quality performance art spaces.

“We haven’t even opened our doors yet, and we’ve done a lot of booking already,” said Rogers. “I think it’s going to be a great fit.

The formal opening of the theater is slated for Friday, with two performances by Lil’ Darlins Vaudeville that evening. Saturday the space will host a free open house and an evening performance by Lucky Peach Puppet Theatre presenting “Taking Tiger Mountain,” a performance it describes as a “a tale of avarice, violence and the search for enlightenment, punctuated with thrilling kung-fu action and occasional foul language.”

Rogers and Allen sold their west-side Lansing home last year and moved into the loft above the theater. In their former home, Allen said, the front porch was an important gathering place where they welcomed their community to gather. In her mind, the Robin Theatre is an extension of that idea.

“This is the new front porch,” Allen said. “We want this to be a safe space to play and perform and exhibit.”