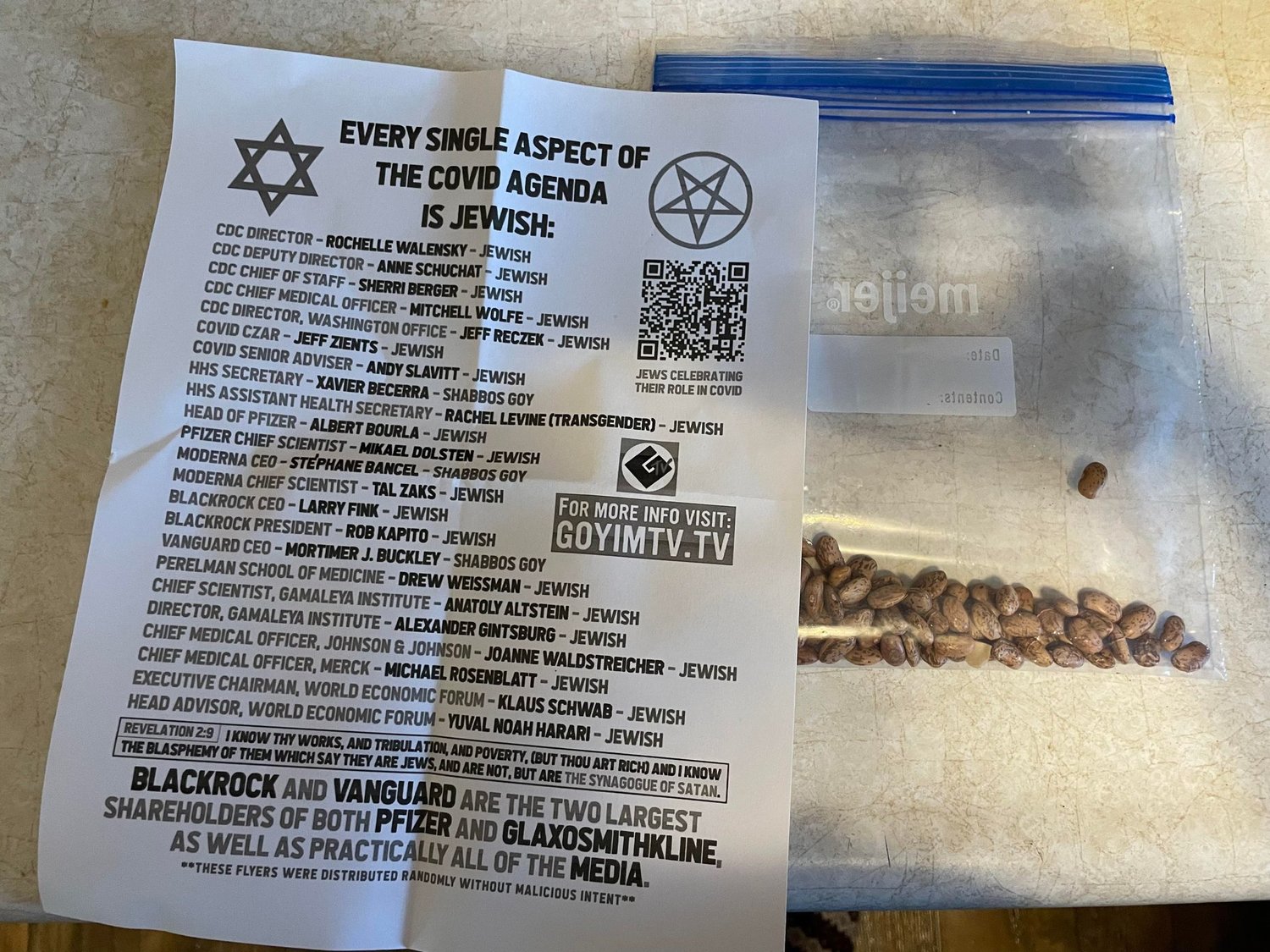 EDITOR'S NOTE: This  story has been updated to include a statement from the Anti-Defamation League of Michigan.

SATURDAY, Jan. 14 — Aileen Hecht was “shocked” when she opened a plastic sandwich bag filled with beans and found it on her driveway this morning. Inside the bag was an anti-semitic flyer directing readers to a website that curates white nationalist hate videos.

“I am shocked,” Hecht said on Facebook Messenger. “I can’t believe people actually think these things about others.”

Hecht is not alone in challenging the flyers. Reached by Facebook, Delta Township Supervisor Ken Fletcher said he hoped the flyers were reported to law enforcement. Hecht was filing a complaint this afternoon.

“Hate speech like this is unacceptable in any community,” Fletcher said. “Delta prides itself on being a community that is welcoming to all.”

The flyer was distributed to “at least 20 homes,” Hecht said.

Carolyn Normandy, executive director of the Anti-Defamation League of Michigan, said the group behind this  flyer is well-known.

"This is a well-known virulent antisemitic organization that has operated in Michigan and other states," she said by email.  "The group represents a loose network of individuals connected by their virulent antisemitism, best known for their antisemitic stunts and schemes to harass Jews.  Members often engage in antisemitic flyering and banner campaigns designed to disrupt and ridicule. "

Normandy encouraged individuals who have received one of these flyers, or other anti-semitic items to report it to the ADL at  adl.org/reportincident."

Identified in the flyer are leaders in the U.S. government, particularly in relation to public health, as well as leaders of various pharma research businesses. It cites the New King James Version of the Book of Revelations, 2:9.

“I know your works, tribulation, and poverty (but you are rich); and I know the blasphemy of those who say they are Jews and are not, but are a synagogue of Satan.”

The use of this verse, according to research published by the Middlebury Institute of Studies at Monterey’s Center on Terrorism, Extremism, and Counter Terrorism, likely links the work to the Christian Identity movement. This is a sect of Christians that are explicitly anti-Black, anti-LGBTQ and anti-semitic in their beliefs. The study found an increase in Christian Identity affiliations for white nationalists on telegram and other social media applications.

The Southern Poverty Law Center, which publishes an annual report on hate groups in the U.S., does not currently list a Christian Identity church in the state. It does, however, identify Christ the King Reformed Church in Charlotte, Michigan as a white nationalist group.

The website has been targeted by Jewish activists and leaders in the past. The Jewish News of Northern California reported in 2020 the group’s original web host, Epik, had taken the site down. This was in response to banners hung over a freeway in California which promoted the website, as well as accusing Jews of wanting war. The news outlet reported a Petaluma, California man was responsible for the website. They identified him as Jon Minadeo,Jr.

An email to Eaton County Sheriff’s officials was not immediately responded to this afternoon.