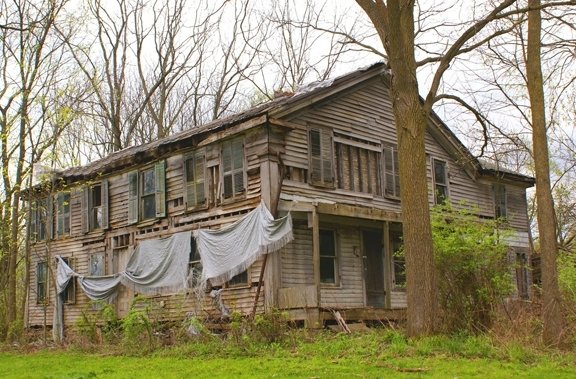 "Everything in this house was built for a particular purpose," he said.

The extra large cistern with no water line, the smooth beam in the attic, the trap-door in the kitchen — to Bob and his wife, Pat, who owned the house at 9740 Kinneville Road, it all added up to one thing: The timber-framed hulk was a stop on the Underground Railroad.

The claim was never verified, though, and it´s unlikely to be. The house came down two weeks ago.

"The structure was going," Pat Albaugh said. "It was unsafe. I guess we weren´t very good stewards of it."

Pat Albaugh researched the house´s history for 20 years and never found anything conclusive, not even the date the house was built.

Several years ago, he scrutinized the attic from every angle. There seemed to be no way in.

Determined to get inside, he took a power saw to the ceiling, but the saw violently shuddered in his hands. The boards weren´t nailed to the beams. He moved the boards aside and found a spacious attic room.

The beam across the attic floor was smooth and worn, unlike the roughly planed ones at the edges of the house.

"It was from people sitting on there," he said.

Albaugh thought it all out. Years ago, he said, a barn with a tall cupola sat across the road. Fugitives traveling along the Grand River a few miles away would spot a light in the window, signaling that the house was safe to approach.

Edwina Murphy, an expert on the Underground Railroad and a member of Michigan´s Freedom Trail Commission, said it´s easy to be misled by odd architecture.

"Houses are just quirky and so are their builders," Murphy said. "I grew up in a house that had crazy little things like that, and it was in no way affiliated with the Underground Railroad."

Murphy, the curator of the Michigan Collection at the Library of Michigan, said that no documented Underground Railroad routes run through Eaton, Clinton or Ingham counties, but added that "anything is possible."

"It would be presumptuous to say definitively that this region did or did not have activity," she said. "It could be that we´ll never see the documentation."

Pat Albaugh sighed at the chances she may have missed to change the Underground Railroad map in Michigan.

She has lived near the house for 40 years, but she didn´t get interested in its history until Clayton Naylor, its previous owner and a close friend, left it to the Albaughs over 20 years ago.

Just once, Albaugh asked Naylor whether fugitive slaves stayed in the house.

"You don´t know how many times I´ve booted myself for not probing more," she said.

Naylor told the Arbaughs the house came down to him from his grandfather, Phineas, a Civil War veteran who got the house from the original owner and builder, a farmer named Calvin Hale.

For a historian, that´s something to grab onto. According to Murphy, it´s often the people who lived in the house, not the house, that counts.

A biographical sketch from Samuel Durant´s "History of Ingham and Eaton Counties" pegs Hale as a "thoroughly practical farmer" who was "fearless in the advocacy of his principles."

"Religiously, his views are liberal," the sketch reads. "His wife is a member of the Congregational Church." That implies Hale wasn´t a member of any church.

If Hale were mentioned in abolitionist periodicals, Murphy said, that might be a "smoking gun." But no such mention has been found.

Pat Albaugh spent years chasing records, but never even found a deed of sale for the house.

But she never doubted that the house sheltered fugitive slaves. For years, she took groups of fourth and fifth-graders to the house and gave them stern lessons about the Underground Railroad.

When the kids told her they´d just run away if they were slaves, she set them straight.

Now she´s resigned to the idea that the house´s putative history will never be proven.

She has no plan to build on the land or sell it for now.

"Perhaps some day I´ll put a sign on it," she said.

Bob Albaugh walked away from the rubble, back to his house. The shadows took over. Thunder boomed in the distance, over the Grand River. While we were talking, a friend of Albaugh´s prowled the grounds with a metal detector.

The evening´s haul: a jar lid, a brake shoe and a piece of a leather boot.