How Biggby helped bring gourmet coffee to the masses 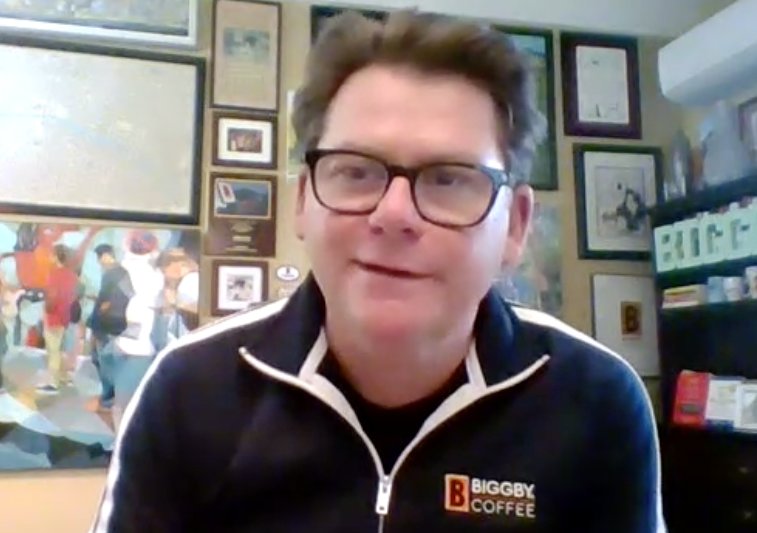 These days, there’s a boutique coffee shop on every corner in any given city. For younger generations, it’s hard to imagine a world without a decent selection of coffeehouses. As he reflects on 25 years of success, Biggby Coffee cofounder and co-CEO Bob Fish recalls a faithful trip to Seattle back in 1993 as the moment he knew specialty coffee would finally takeoff nationwide.

“As kid, I grew up in England, France and Germany. I didn’t think America was ever going to catch up with specialty coffee,” Fish said. “But there it was.”

At the time, Fish was operating a Flap Jack restaurant with his partner and fellow Biggby cofounder Mary Roszel. Impressed by the boutique coffee scene in Seattle, he began envisioning bringing that trend back home to East Lansing.

“I remember coming home and telling Mary that as much as we loved Flap Jack, it was time to move on,” Fish said. “There was something very special happening in Greater Lansing, which had 35 coffee shops by 1995. But there weren’t 35 coffee shops in all of Southeast Michigan or Grand Rapids. It’s not often Lansing is at the cutting edge.”

Fish and Roszel sold the restaurant and took a year off to master the specialty coffee industry. Their research included a three months stay in Seattle, where they studied under micro roasters and learned the tricks of the trade. “I knew specialty coffee as a consumer, but I never knew it from a production perspective. I learned that, came back and wrote up a business plan,” Fish said.

Fish and Roszel tracked down the original Biggby location, which is being demolished, in late 1994. After converting it from an Arby’s, the very first Biggby, then known as Beaner’s, was operational. “Prior to that moment in time, going to a coffee shop in America meant getting a cup with your breakfast at Big Boy,” Fish said.

At the very first shop, Fish and Roszel were incredibly hands-on. Fish has plenty of memories of working all-day shifts, brewing and serving coffee and sweeping the floors and wiping down the countertops. If you stopped by in 1995, chances are you were served by one of the founders. This approach led them to Michael McFall, a barista who would later manage the second Biggby and is now co-CEO with Fish.

“I came in to interview him, and it was a nice spring day so we went for a walk,” Fish said. “Four hours later we came back, shook hands and decided that we’d become partners to grow Biggby coffee.”

Biggby Coffee struck a nerve by offering gourmet flavor profiles minus the pretentious attitudes and hard to pronounce Italian words. Giving drinks cozy names like Teddy Bear and Caramel Marvel made all the difference. “We didn’t trip you up over what you didn’t know. Nobody knows what a macchiato is, so we called it a Caramel Marvel,” Fish said.

As their name became well established in Greater Lansing, Fish, Roszel and McFall set out to develop a franchise. With just two locations opened, Fish said Biggby was often mistaken for a chain anyway. People would call in to ask where the company was based. “That led us to believe we had a franchise-able concept,” Fish said. “I would consider Michael and I teachers, so the idea of giving people a system and coaching them along to create a successful business fit our personalities well.”

By 2006, there were 60 Biggby locations and Fish and company crossed paths with Fred DeLuca, cofounder of Subway. DeLuca, who oversaw Subway’s growth into the largest fast food chain in the world, mentored the team on franchising and almost acquired an equity stake in Biggby before his death in 2015.

Perhaps the biggest challenge in Biggby’s history came in 2007, when the company needed a new name due to the word beaner’s usage as a racial slur. Rebranding a massive business can be highly polarizing, usually yearning unfettered praise or great disdain — just look at New Coke if you want to see how ugly it can get.

“We didn’t know it was a slur when we opened up. There was no outside pressure, but we as owners woke up every day knowing it was derogatory. We decided the right thing to do was to change the name,” Fish said. “Folks groaned and said we were being ‘too PC,’ but we just said thank you and took it as a compliment.”

Though Roszel would retire in 2012, Fish and McFall maintain complete control of the company. And while the coronavirus pandemic may have disrupted the 25th anniversary, Fish noted that sales are up 22 percent. He attributes the success in spite of the pandemic partially to Biggby’s fully franchised setup.

“Our owners are always local. It’s not some corporate-run entity. The customers knowing the owner made a real difference in the continuity of business we were able to provide,” Fish said.