How to bring back downtown East Lansing? 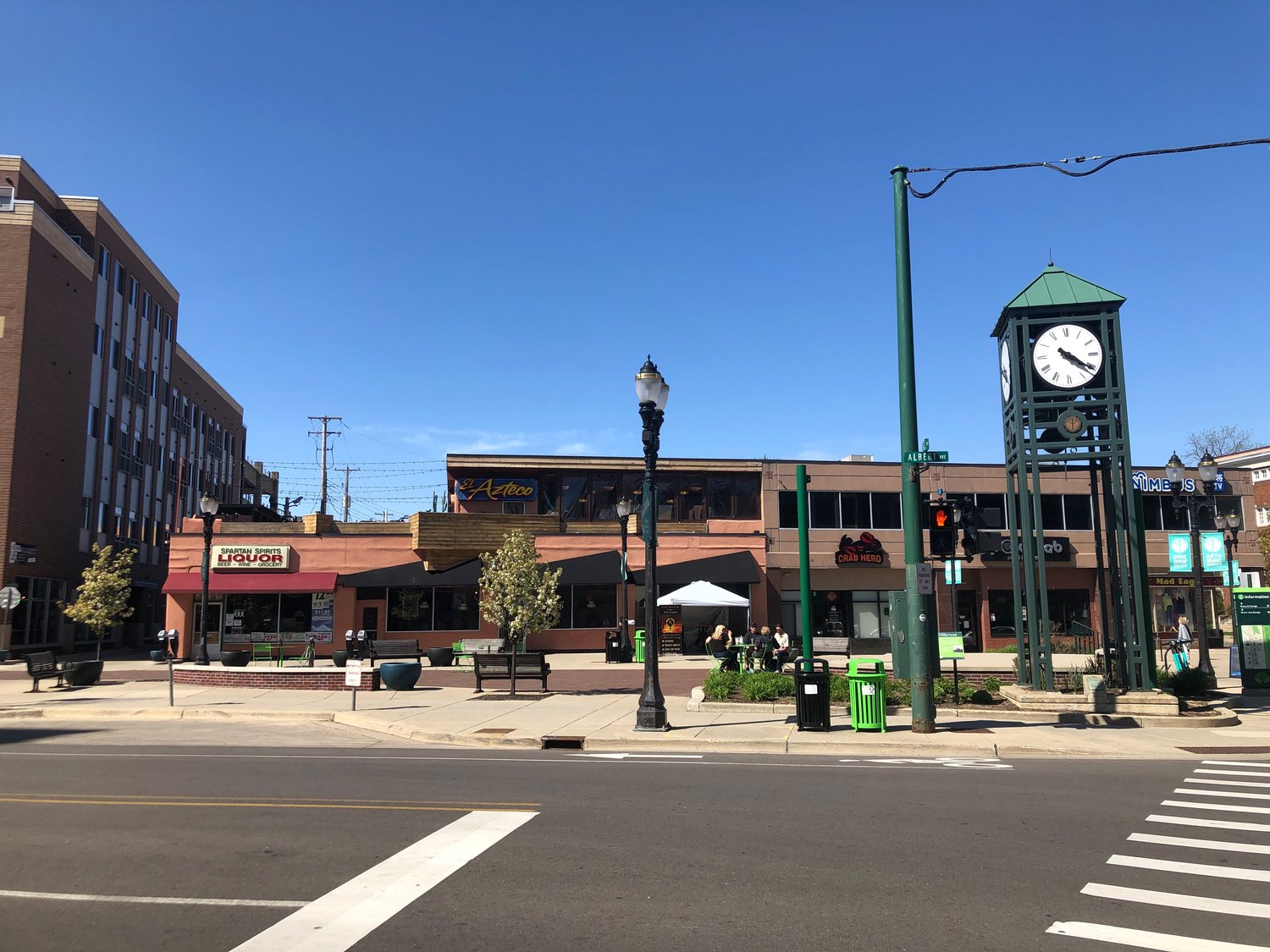 Nearly empty Albert Street in downtown East Lansing. Now, imagine picnic tables in the street so people can dine safely on food and beverages -- including alcoholic ones -- from downtown establishments. A committee is working on just such an idea.
Cole Tunningley/City Pulse
Posted Saturday, May 16, 2020 7:58 pm
Cole Tunningley

SATURDAY, May 14 — Since MSU sent its students home and its businesses went on lockdown, downtown East Lansing hasn’t seen much excitement. But that could change if a plan in development comes to fruition.

Families decked out in face masks sitting at picnic tables strewn across a closed-down Albert Street. Couples enjoying a burger and beer to the sound of human voices returning to the air downtown like the flowers coming back in springtime. City officials said that they are aiming to create a downtown that people can enjoy worry-free, and they want to do it soon.

A committee of the East Lansing Downtown Development Authority met on Zoom last week to discuss its idea for increased outdoor seating in downtown East Lansing.

To stay safe in the era of COVID-19, the committee hopes to add picnic tables spaced 12 feet apart and more space for curbside service, along with informational signage and handwashing stations. That way, the public can enjoy local business while practicing safe social distancing.

“I would like for us to start having an idea of things that we can be doing to help our restaurant, bar and retail establishments as soon as the governor starts phasing things to open,” said Lynsey Little Clayton, an at-large committee member. If all goes according to plan, she also said, the downtown area will start to see some of these changes by the end of May.

The committee’s discussion mainly revolved around closing Albert Street so that pedestrians, bicyclists and customers can use the street freely for dining or just hanging out.

Committee members all agreed that Albert Street was the easiest place to start testing out the proposal. With its plethora of local businesses and large, open walkways, it seemed to them the ideal location for both having fun and safely social distancing.

Clayton brought up utilizing the Bailey Lot and Brookfield Plaza for outdoor seating in addition to Albert. She also mentioned the possibility of letting restaurants use nearby alleyways to offer curbside service.

The committee made no final decision on whether to submit its proposal to the DDA.

Instead, members agreed to contact the Ingham County Health Department and the Michigan Liquor License Commission to discuss the logistics of the idea. They also said they need to figure out a budget.

The liquor issue in particular raised concerns. “I don’t know if it’s possible to just say that we’re not going to enforce some things,” said David Haywood, the planning and zoning administrator

Clayton said that discussions with the MLCC would emphasize that the plan is only short term and that the committee is willing to work on the details of the public drinking aspect of it.

Mike Krueger, a committee member and general manager of Crunchy’s bar, said he imagines the proposed outdoor eating program would only last as long as Gov. Gretchen Whitmer’s emergency order. “We don’t know how long the restrictions on restaurants are going to last,” he said.

Krueger noted that small businesses in downtown East Lansing need all the help they can get right now. “We should find a way to accommodate businesses during this timeframe,” he said. We should do whatever we can do to help them succeed in this messed-up environment.” By creating a safe environment on the street, Krueger said that he hopes the city can help get the local economy back on its feet.

Operations analyst Heather Pope said the Public Works Department is doing design work to figure out what this plan would look like in real life. She proposed putting helpful social distancing markings on the ground and maintaining a 12-foot lane for emergency vehicles.

Cincinnati.com reported that the city plans to close portions of 25 streets to allow restaurants an opportunity to increase the size of their outdoor seating areas after Gov. Mike DeWine announced that restaurants can open up their outdoor spaces this upcoming Friday.

The committee was undecided about where funding for this project should come from. Clayton suggested that the Parks and Recreation Department could fund a portion of the project. “As a committee, we are trying to make responsible decisions,” she said. “But decisions that other people make are costing the DDA a lot of money, and I’m concerned.”

Stephens, Pope and Krueger all recommended using DDA money to fund at least part of the project.

The committee decided to, at the very least, discuss its enthusiasm for the outdoor eating areas proposal with the DDA. “We plan to make sure the board is aware of our intentions,” Krueger said,

Though the future of this proposal is unclear, Clayton acknowledged that coming up with a plan to help local businesses is a necessity.

“It’s easier to tweak things if we have some plans in place already,” she said. “We all realize that, at some point, these businesses are going to reopen.”