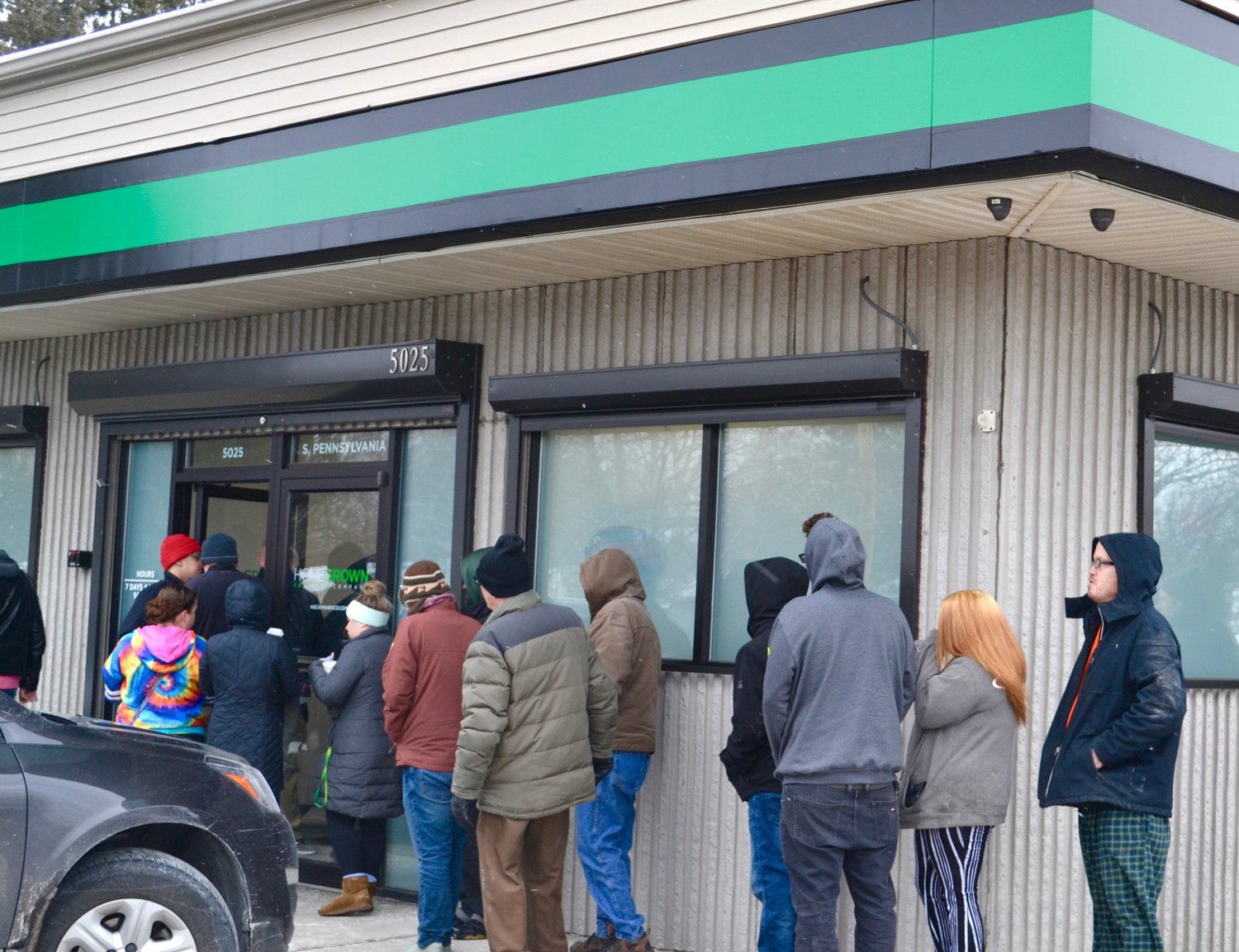 The paranoia of driving to your dealer’s house is old news. No longer will you have to pester your one friend with a med card, and you’re not going to have to worry about catching vape lung from bootlegs carts anymore. Adults 21 and over can finally purchase recreational marijuana in Lansing.

HomeGrown Provisioning Center, on South Pennsylvania Avenue, opened its doors at 9 a.m. Friday to a line of customers winding around the building and into the parking lot.

Inside the shop DJs played music and employees handed out free tee shirts to the eager customers. As is typical in most dispensaries, visitors are first led into a waiting room, then the saleroom where they can make purchases and interact with “budtenders.”

Most marijuana dispensaries are cash only. Homegrown, like most others, has an ATM in the lobby.

In addition to marijuana in a multitude of forms — flower, edibles, tinctures, wax, vape carts and more — Homegrown also offers a selection of paraphernalia.

This reporter noticed that prices seem to be rising slightly — for example, vape carts that went for $40 a few months ago now sell for $50 or even $60 a pop. This is perhaps due to the fact that Michigan’s weed market is in its infancy, with retailers struggling to meet demand. There is also an additional 10 percent excise tax on all recreational sales.

Prices are also expected to rise as the Michigan marijuana industry undergoes a transition. According to a bulletin released by the Marijuana Regulatory Agency on Monday, caregivers will no longer be able to sell any marijuana products to licensed business. Licensees who purchase any marijuana product from a caregiver — anything from flower to edibles to vape oil — will eventually be subject to disciplinary action.

The marijuana users in line at the opening of Homegrown had little to say about the regulatory process, Michigan’s laws or any of that boring stuff — they were simply there to do what they have been waiting to do for a while now: experience the bliss of legal drug use.

Randy Jay Matthews, 58, has been waiting for decades for the chance to shop at a recreational provisioning center. “I’m going to buy a couple of different grams of different indicas and sativas,” he said. “All my pot purchases in the past have been illegal, I guess.”

Medical marijuana patients still get priority at Homegrown. There is a section of the store designated “Medical Only,” and cardholders are able to skip the lines of recreational users.

Nick Popov, 33, of Lansing, has already had his med card for a while, but he didn’t want to miss out on a pivotal moment in Lansing’s marijuana history. “It’s more for the novelty. I want to be able to say that I was in Lansing buying the first legal weed.”

Popov said, “I hope some of the smaller dispensaries like Old 127 and Stateside Wellness are able to stay open.”

Homegrown has competition already. Pure Options opened up to recreational users Saturday, only a bit further south down Pennsylvania Avenue.

In addition, Lansing City Clerk Chris Swope confirmed that Stateside Wellness is fully licensed. It is unclear when exactly it will start selling recreational.

Pure Options and Stateside Wellness are both owned by the PG Group. It also owns Cornerstone Wellness and Old 127 Wellness.

Swope has approved 11 conditional licenses for retailers. “As soon as they receive state approval, they get local approval,” he said. The timeline for when these additional dispensaries will open up is unclear. Eight out of the eleven approved shops were already fully licensed to sell medical weed, so they should have an easier time going through the licensing process. It could take days or weeks.

In addition, Swope has approved licenses for 10 growers, a processer and a transporter. There’s no word yet on whether or not Lansing is going to see public smoking areas — the true hallmark of a weed-friendly city — any time soon.

Swope said that the city has not scheduled any application periods for new retail dispensaries. City law allows for up to 28 dispensaries operating in Lansing.

Jase Arzola, 62, in line at Homegrown all the way from San Diego, bragged, “In California, you can go to a flea market and buy pounds of weed, the best vape oil in the world, even mushrooms.”

His daughter is a grower in California, so he came to scope out the Michigan marijuana scene. As the pot scene grows and grows, Michigan can expect an influx of similarly minded weed entrepreneurs looking to capitalize on a market in its infancy. Arzola said, “You’re trying out here! I’m excited for Michigan.”