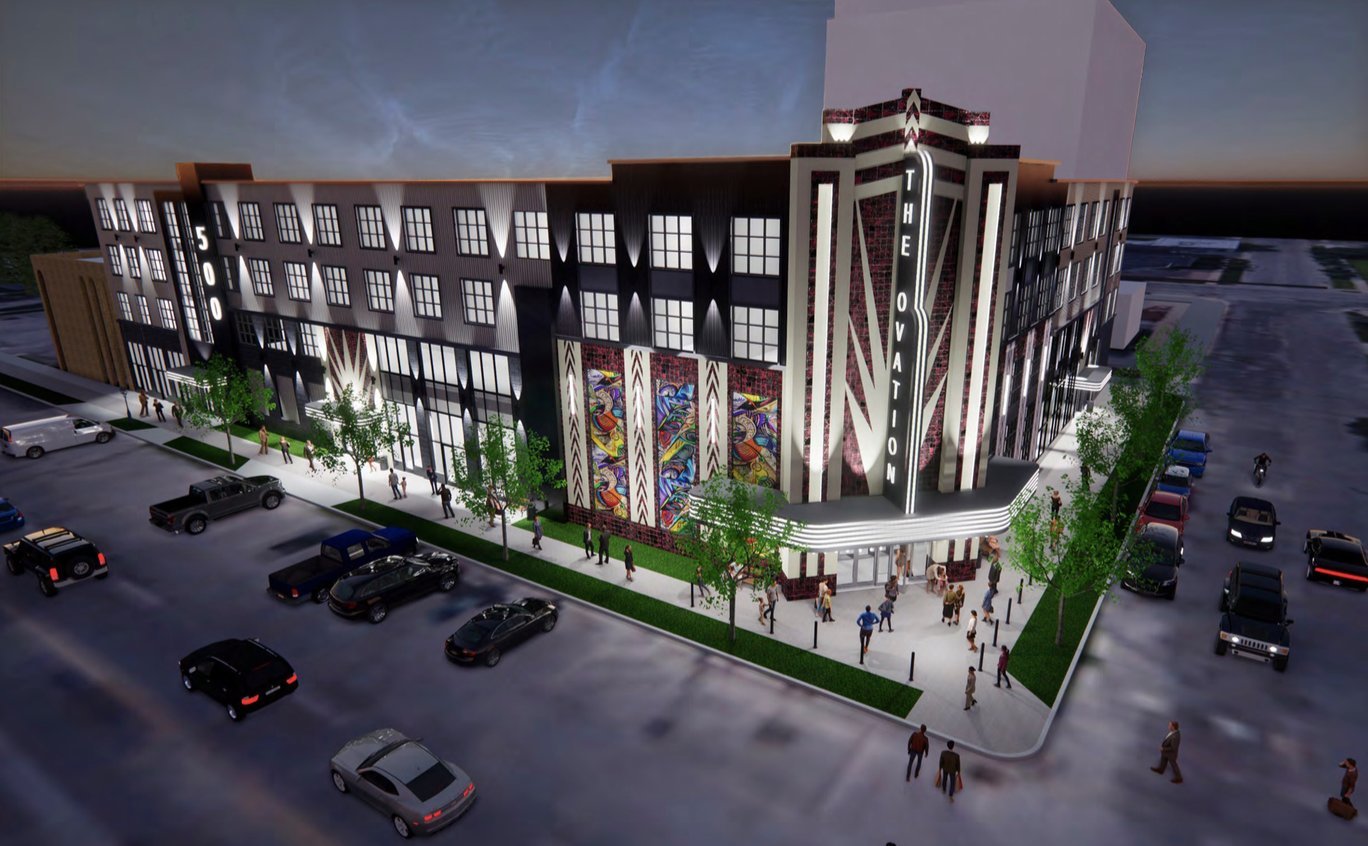 If all goes as planned, Lansing’s 2022-‘23 arts calendar will bring the first act of a multi-million-dollar, real-world production, decades in the making: the groundbreaking of a new downtown performing arts center.

The project team is still pushing for a groundbreaking in spring 2023, or possibly sooner, with opening day set for fall 2024, Dominic Cochran, director of the Lansing Public Media Center and co-director of the Capital City Film Festival, said last week.

Mayor Andy Schor announced plans Feb. 1 to build a box-style concert venue that would hold 1,400 seats or 2,000 standing concertgoers and fill a mid-sized hole in the local arts and entertainment market, drawing national rock, country, hip-hop, comedy and other attractions that now skip Lansing to play in Detroit or Grand Rapids. It would also be the permanent home of the Lansing Public Media Center, and, possibly, All of the Above Hip-Hop Academy and the Lansing Art Gallery.

The facility would also fill a physical gap on the south edge of downtown — a mostly vacant lot at the corner of Washington Avenue and Lenawee Street.

So far, the only show going on at the Ovation — which Cochran described as a “placeholder name” for the facility — is the finance dance, but it appears to be headed for a soft landing.

The facility is expected to cost $17 million (for just the performing arts center) to $27 million, if 68 income-generating apartments are included in the design, in the manner of the Allen Neighborhood Center’s new Allen Place complex.

The financial package that activated the project in February is still in the bag: $2 million in dedicated state funding and an additional $8 million in upfront revenue from the bonding of public, educational and government access (PEG) Comcast cable fees.

Since then, the city has also applied for $5 million in federal Revitalization and Placemaking, or RAP grants, for the performing arts center. The RAP program is funneling $100 million in American Rescue Plan money to Michigan for a range of purposes, including “permanent place-based infrastructure associated with traditional downtowns.” The grant awardees will be announced by the Michigan Economic Development Corp., which is administering the program, at the end of September.

The final act in the finance dance — the pirouette of the private donors — is already underway, according to Caitlin O’Rourke, vice president of Capitol Fundraising Associates, which the city has retained to find the money. O’Rourke’s firm has identified $5 million in potential donor funds, and she said several commitments have already been made.

“We’re confident we’ll surpass $5 million,” O’Rourke said. “After the initial announcement, we’ve found that people are very, very excited about having live music in Lansing. People are reaching out to contribute.” O’Rourke said the fundraising plan calls for “all commitments in” by the end of 2023. Many levels of funding, for corporations and individuals, are available, some of them sweetened by VIP perks and naming opportunities, including the name of the facility.

Cochran said that if housing isn’t included, the center could be built without incurring debt, with the help of the RAP grant and/or private donations. Including housing in the budget would push the cost well over $20 million and require a bank loan, but it would also “put the whole project in a very strong financial position,” he added.

Even without housing, Cochran predicted that the facility would be “financially self-sustaining,” with revenue from a planned rooftop bistro and restaurant supplementing box office take and concessions.

Over the summer, the city has been working with an architect to develop a more detailed and comprehensive design.

“We’re researching specific sound and lighting components and refining how traffic will flow through the building, how the Media Center will fit with the income-producing components,” he said. “It doesn’t sound that sexy on the surface, but we’re getting closer to knowing how the building will function day to day.”

Ozay Moore of All of the Above Hip-Hop Academy and Michelle Carlson, acting director of the Lansing Art Gallery, said their organizations have not decided whether to join the project.

Carlson said the Lansing Art Gallery is “supportive of the project and the potential it has,” but “the board is not ready to make any decisions at this point.”

“It’s a big project, so I don’t blame them for saying ‘Where do we sign?’” Cochran said. “There are a lot of moving parts.”

Over the spring and summer, the Lansing project team has been comparing notes with the staff of a similar venue, Old Forester’s Paristown Hall in Louisville, Kentucky. The box-style hall opened in July 2019, holds about 2,000 standing concert-goers and bills itself as “a performing arts facility with the energy of a nightclub.”

O’Rourke and Schor walked through the empty facility one afternoon in May, when Schor was in Louisville for a mayor’s conference. The next evening, O’Rourke went to a wild concert headlined by metalcore band Devil Wears Prada and punk band Beartooth.

O’Rourke said the facilities are “similar,” but she noted several significant differences. In Louisville, where the weather is friendlier year round, tickets are taken at the door, while the proposed design for Lansing’s center includes a lobby. Lansing’s proposed center also has larger backstage and green room spaces for the artists.

However, the two facilities are much alike in scale, overall vibe and target markets.

“We’re affectionately calling them our sister venue now,” Cochran said. “They had to get it done inexpensively, but they didn’t want to build a box that had no soul, and they did a really nice job.”

O’Rourke picked up fundraising tips from the Paristown staff and took note of small flourishes like “RockStar Bourbon,” barreled by Old Forester and made available only as a gift to performers at Paristown Hall.

But what impressed her most was the diversity of the audience.

“Even though the concert I went to was pretty heavy rock, the range of age groups, the people who were there and enjoying it, was all across the board, and that made me even more excited about building the Ovation,” she said.