LGBTQ+ pride in Michigan 50 years on 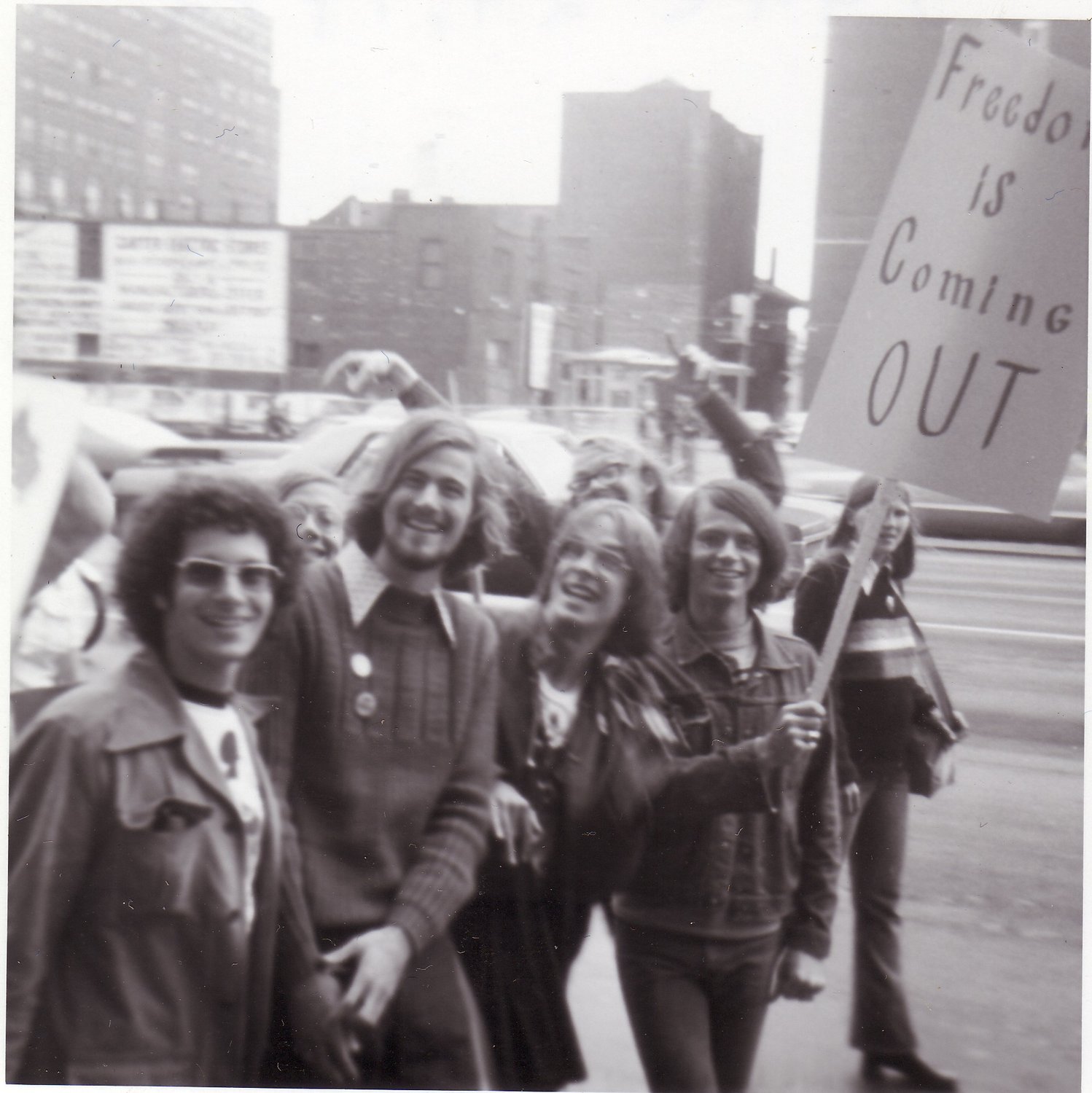 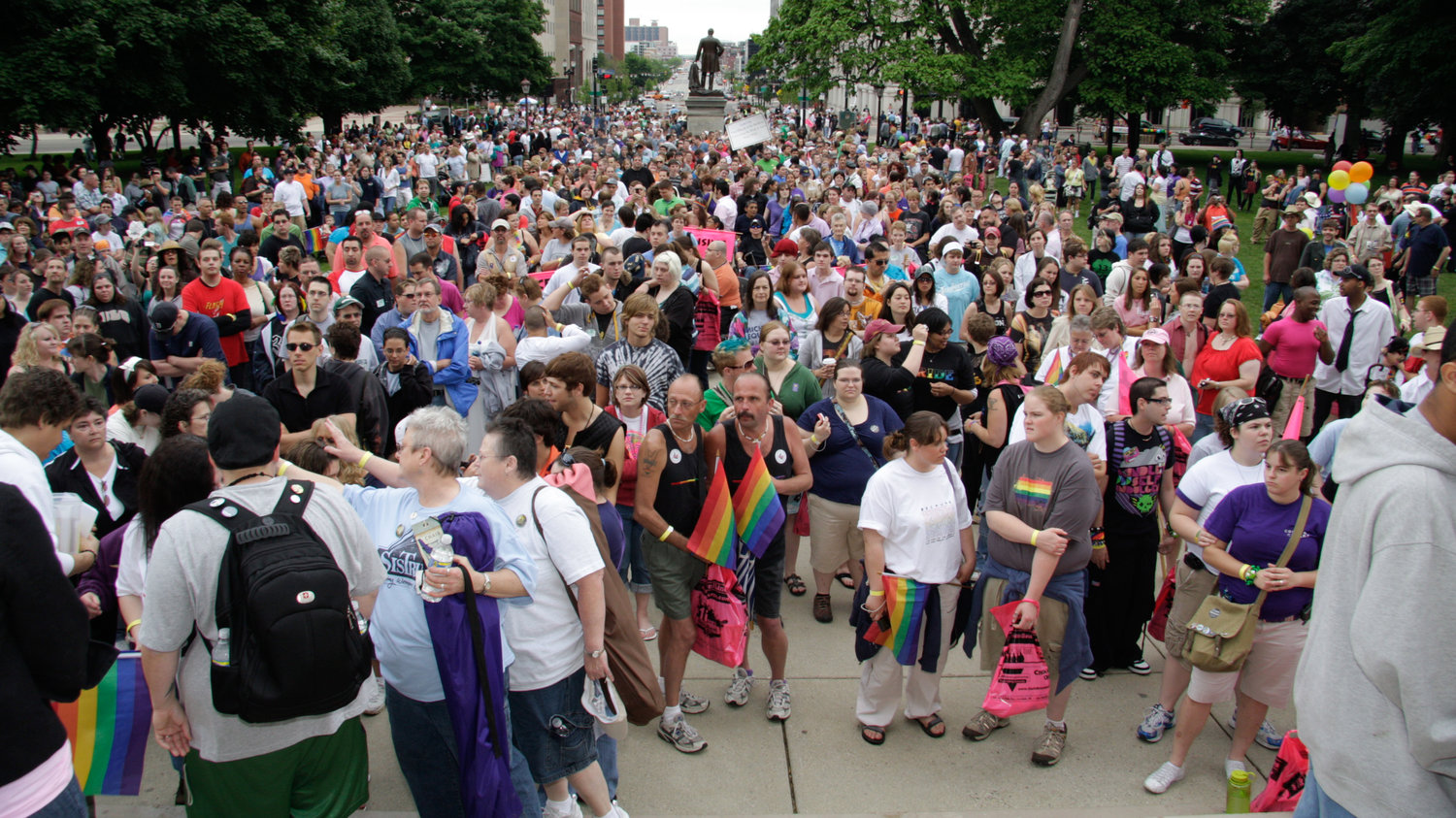 The crowd at the Capitol from the Michigan Pride rally in 2009.
Roxanne Frith 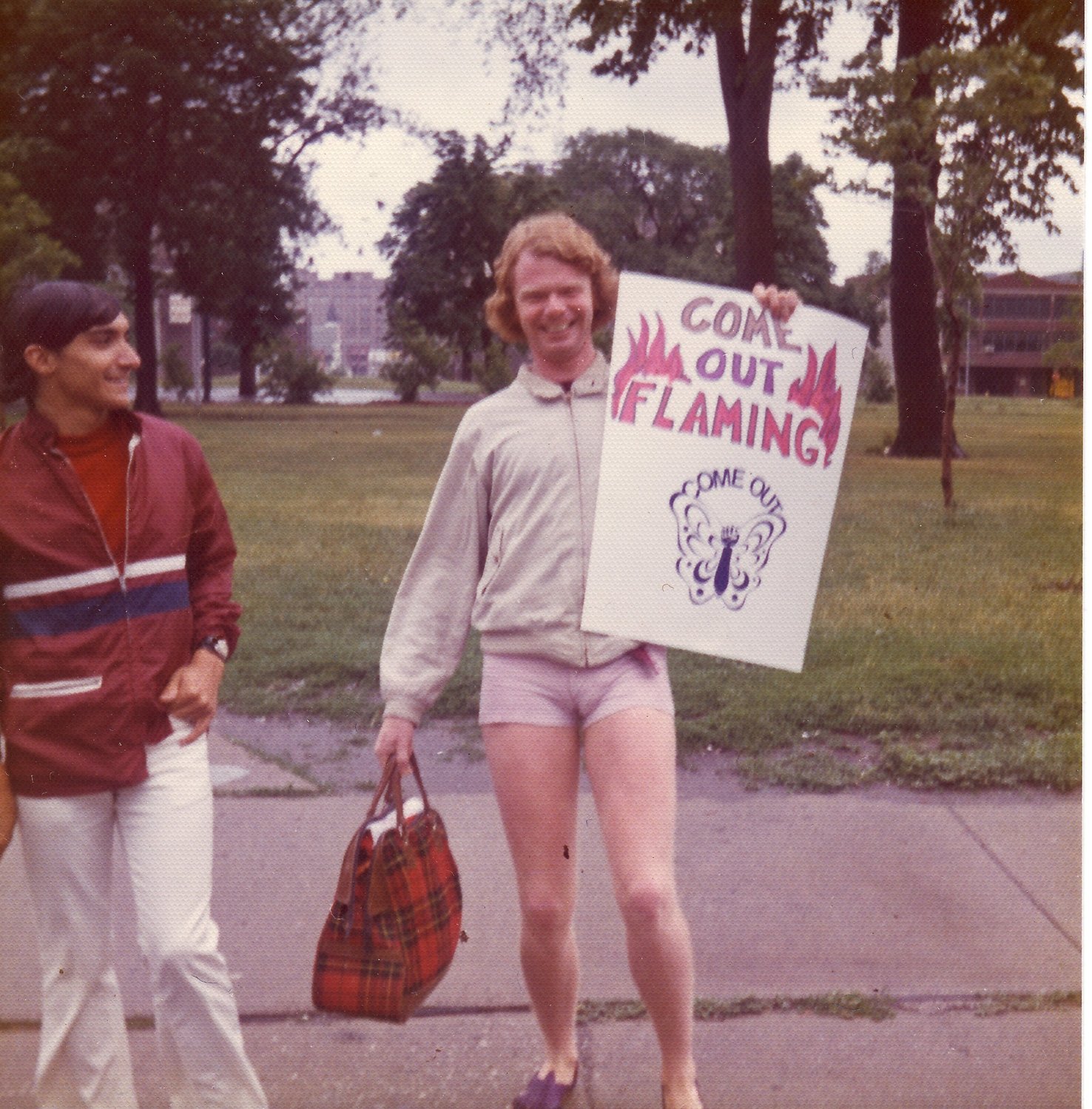 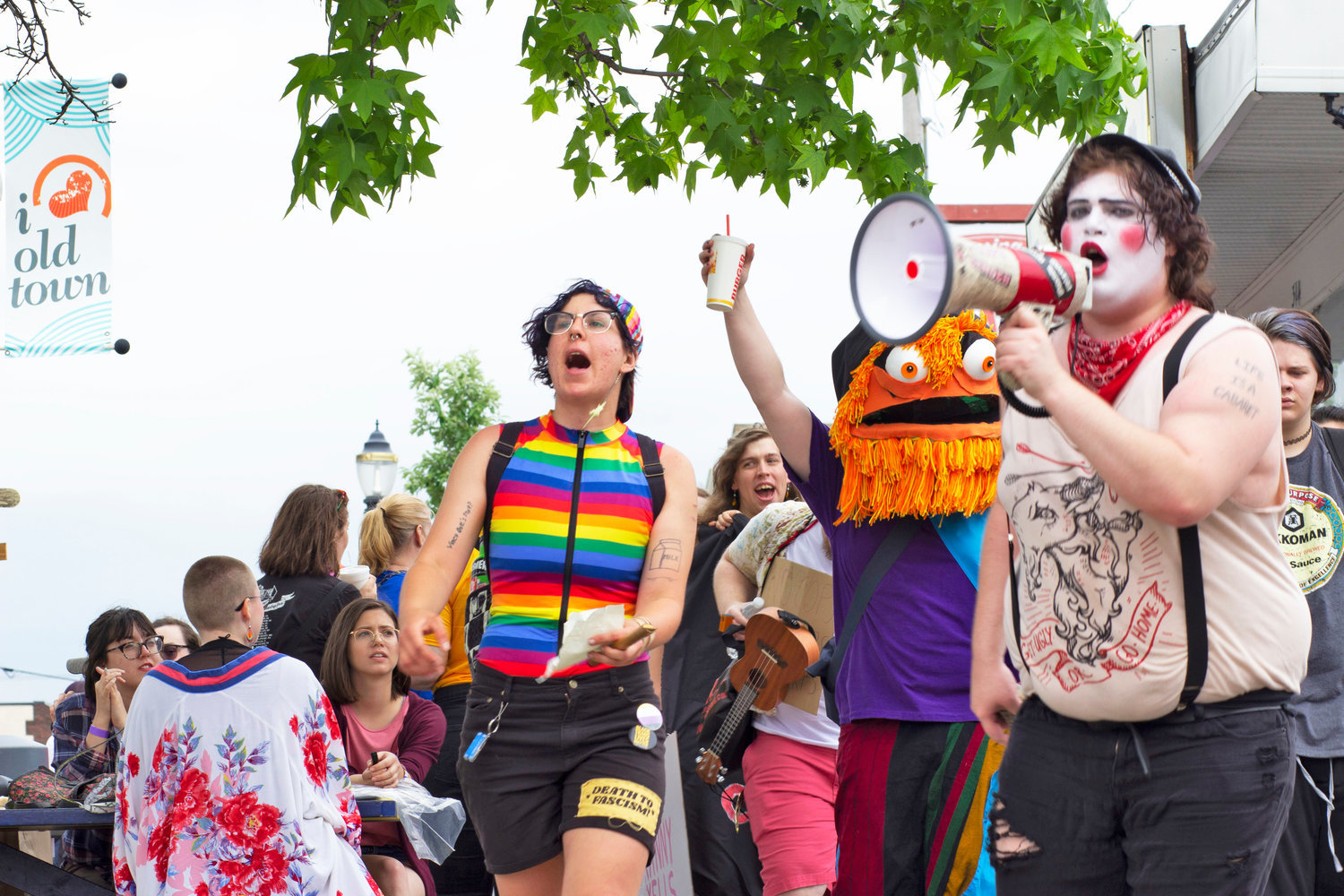 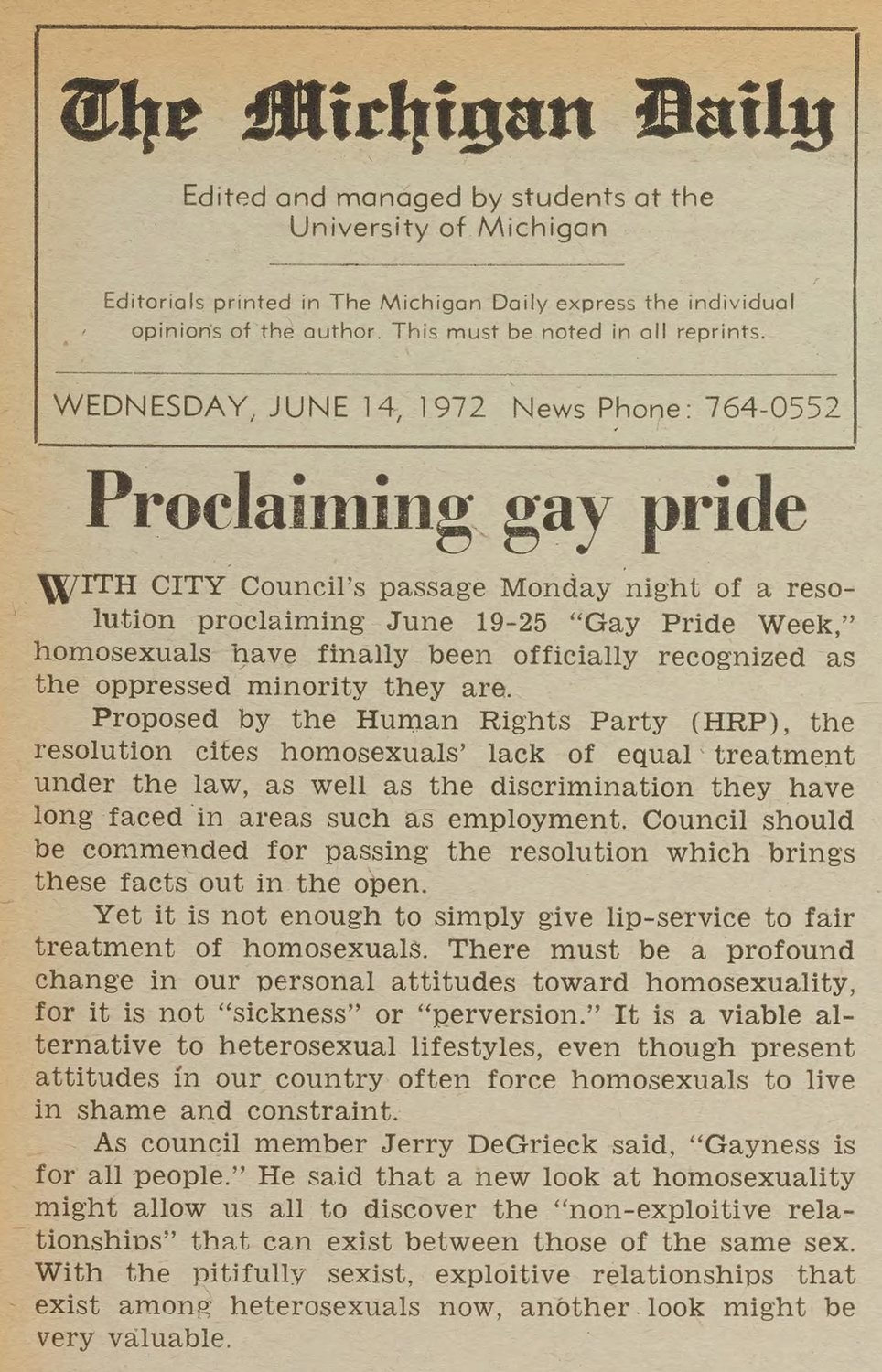 This 1972 editorial from the student newspaper at the University of Michigan comments the resolution by the Ann Arbor City Council proclaiming Gay Pride Week, “the first known official proclamation by a governmental body in the United States,” Tim Retzloff writes. “With a new Republican majority, the Council refused to issue a proclamation in 1973.”

Marching down Woodward Avenue in Detroit on June 24, 1972, Greg Williams carried a hand-made posterboard sign that read “Come Out Flaming.” Flickers of fire drawn on each side echoed the young man’s wavy red hair.

Wearing tight pink short shorts, despite temperatures in the mid-50s, Williams was indeed out and flaming. The former Michigan State University student was among hundreds of people who participated in Christopher Street Detroit ’72, Michigan’s very first gay pride celebration, held 50 years ago this summer.

The demands of the march were twofold: repeal all antigay laws and full civil rights for gay people.

On June 12, 1972, the Ann Arbor City passed a resolution proclaiming June 19-25 as Gay Pride Week, the first known official proclamation by a governmental body in the United States. With a new Republican majority, the Council refused to issue a proclamation in 1973.

Five decades on, gay pride is now known as LGBTQ+ pride. Over the years, pride has morphed and grown and splintered, transformed now into dozens of local events geographically dispersed across the state.

This year there are LGBTQ+ prides in Kalamazoo, Grand Rapids, Holland, Battle Creek, Flint, Detroit, the Upper Peninsula, and the Mackinac Straits. Yes, it is called Straits Pride. (For details on the various pride events this month, see Page 28.)

Ferndale Pride, as its own event, dates to 2011, when Motor City Pride moved to Hart Plaza, returning to Detroit after more than 20 years in the suburbs.  Now there are also local prides in many of the Detroit burbs, from Grosse Pointe to Canton, from Madison Heights to South Lyon, from Royal Oak to Hazel Park and Macomb County.

Some are quite large, corporate and polished. Others carry a more grassroots do-it-yourself feel, closer to the original 1972 gathering, a gathering that one observer described as “ragtag” and another called a “fiasco.”

The balkanization of pride may feel like an unraveling, especially as LGBTQ+ Michiganders face an uncertain future, possibly an existential threat.

Justice Samuel Alito ‘s leaked draft opinion in the case of Dobbs v. Jackson Women’s Health Organization currently before the Supreme Court indicates that the 1973 Roe v. Wade decision is all but certain to be overturned, with the protection of abortion rights left up to the states.

As NPR’s Nina Totenberg reported in October 2020, Alito and Justice Clarence Thomas both have same-sex marriage in their crosshairs.

The implications are real.

When we need to unite against enemies as a community, this seems no time for LGBTQ+ folk to be fragmented. Yet it’s unclear that so having many different prides is necessarily a weakness. Maybe it’s a reflection of new permutations emerging to meet new challenges.

And we’ve experienced potential existential threats in the past.

Anita Bryant’s “Save Our Children” campaign that landed in June 1977 has echoes in politicians of today flinging ridiculous accusations that we and our supporter are “groomers” intent to recruit young people into a vile lifestyle.

Remember that Harvey Milk won election to the San Francisco Board of Supervisors and delivered his famous “Hope speech” at the Gay Freedom Day rally that same year.

Anita Bryant also prompted the founding that autumn of the Michigan Organization for Human Rights — MOHR — the precursor to Equality Michigan.

The first pride I attended was in 1986, when MOHR resumed having parades in Detroit after a 10-year hiatus. Organizers didn’t even know there had been parades and marches before. I remember the exhilaration I felt afterward, followed by deep hurt and fear when the Supreme Court the next week in Bowers v. Hardwick declared that gay people could still be deemed criminal.

In Michigan, a sodomy conviction could bring a sentence of up to 15 years in prison. The law remained in effect until the Lawrence v. Texas ruling in 2003, 17 years later.

Year by year, pride in Michigan has reflected changing needs and immediate circumstances.

By the late 1980s, pride had become a major statewide event. MOHR organizers switched from calling the procession a parade to calling it a march, and moved it to Lansing for the 20th anniversary of Stonewall in 1989 with the specific intent of marching on the state Capitol to demand change. Local poet Terri Jewell and U.S. Rep. John Conyers addressed the rally that year.

Historian Christina Hanhardt crystalizes the dichotomy between marches and parades in the 2016 documentary “Pride Denied,” a harsh critique of World Pride 2014 held in Toronto.

“The difference between protests and parades is a significant difference. While the first is about political collectivity in the face of trying to fight for a better and different world,” Hanhardt says, “parades are often about celebrating a community that assumes that it knows who already belongs and who doesn't. That doesn’t always recognize that some of those terms of belonging are deeply bound up in forms of exclusion.”

Hanhardt goes on to argue that protest and pleasure have long gone hand in hand in how queer people celebrate pride.

And another year Pedro Zamora spoke at the Capitol before he gained fame on MTV’s “Real World,” before he died from AIDS the night his last episode aired.

For a time, organizers held mass commitment ceremonies and the recited names of people lost to HIV and AIDS. Some 520 names were read aloud at the AIDS remembrance ceremony on the steps of the State Capitol on June 16, 2000.

Whose pride is it anyway?

It’s undeniable that so-called “rainbow capitalism,” with displays of pride merchandise at Meijer and Walmart, is chasing a market niche. Corporate sponsors have indeed transformed how the big prides are conducted.

In the words of Gil Scot Heron, “All consumers know that when the producer names the tune, the consumer has got to dance.”

Queer people have navigated exploitation before, in particular during the pre-Stonewall days when most owners of gay bars were straight.

There are logistics and costs. Most prides are mostly volunteer efforts.

No all prides have been co-opted.

In 2019, during the last in-person pride in Lansing prior to COVID, People’s Pride made itself heard, chanting “Ho Ho! Hey Hey! We won’t pay to be gay!” to protest the $10 donation/entry fee to attend the “official” Lansing pride street fair.

We can trace pride back to radical roots, when Craig Rodwell, founder of the Oscar Wilde Bookstore in New York, helped organize the first pride march in New York in 1970 to mark the first anniversary of Stonewall. Activists held celebrations in Chicago, Los Angeles and San Francisco, as well.

In the middle of the COVID lockdown in 2020, the GLBT Historical Society in San Francisco hosted an online exhibit showcasing the city’s first 10 years of pride.

The exhibit revealed that infighting, burnout, pressure to toe a party line had been part of San Francisco pride from the start. It showed, as well, that there was always more diversity than people might realize, and less diversity than there should have been.

Pride is taking on new permutations and it is becoming unmoored from the calendar, no longer so tied to June.  Lansing Pride is slated for August in Old Town. Ann Arbor Pride will be in September.

Before Michigan State switched from a trimester to a semester academic calendar, its annual pride events took place in June, coinciding with celebrations elsewhere. This year MSU Pride Week took place in April.

Detroit’s Hotter Than July, one of the country’s premiere African American pride celebrations, has been held in July since 1996.

With all the changes, there have been important constants. Pride celebrations offer a place of belonging. They convey a collective vocal and visible assertion of self. At their best, they meet a craving to come together as us, with the definition of “us” in flux as it has been from the beginnings of pride, in Michigan and elsewhere.

LGBTQ+ people face a multiplicity of dangers, from religious zealots who would like to erase us from the planet or at least render us silent and invisible again, to the epidemic of trans women of color being murdered, to mental health issues and suicide, especially among LGBTQ+ youth.

According to one source, Greg Williams, who carried the “Come Out Flaming” sign back in 1972, took his own life in 1978 when we worked for a Wall Street brokerage firm. Since New York State death certificates are not public until after 50 years, this cannot be verified.

Whatever the cause of his early death at age 30, Williams was part of a pioneering event in 1972 that has endured. Some sort of LGBTQ+ pride celebration has been held in Michigan every year since.

In reflecting on pride in Michigan 50 years on, let us resist both nostalgia and cynicism and appreciate how the shifting character and aims of pride reflect our astounding adaptability, our capacity not only to adapt to change but to foster change.

Traditions come and go, be they the bygone Metro Detroit Pride Banquet or the Lansing Association for Human Rights annual Prism Awards.

Ours is a scrappy and feisty community, ours is a determined community. We can dress up and we can surely dress our enemies down.

This year’s Michigan Pride consists of a rally at the State Capitol on June 26.

With a multiplicity of localized prides, each with their own distinctive character, after two years of COVID lockdown and delay, with virtual prides held online, protest is back.