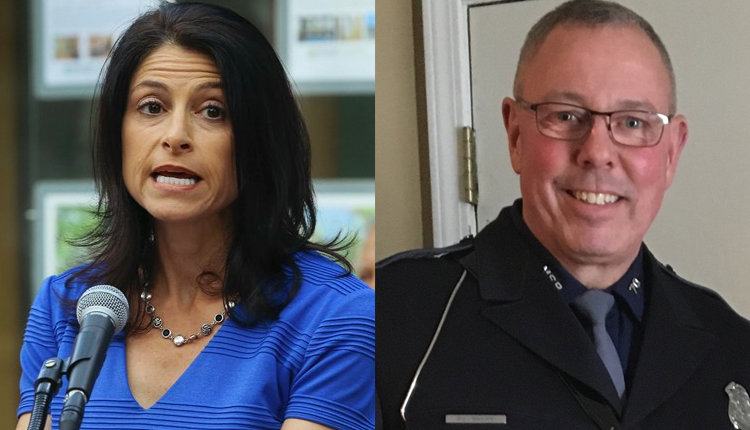 FRIDAY, March 22 — Michigan Attorney General Dana Nessel has some career advice for a member of the state Medical Marihuana Licensing Board, which is being phased out:

“Don Bailey is going to have to get a new job now. I know, like those animal control facilities, they always need people to euthanize puppies and stuff. There has got to be some work for him.”

Nessel spoke at a dinner at the Lansing Center last night thrown by the Michigan Cannabis Industry Association attended by over 400 marijuana industry insiders. They’ve been critical of Bailey, a former Michigan State Police officer, for his conservative stance on regulations.

Gov. Gretchen Whitmer abolished the board on March 1 with an executive order that instead created the Marihuana Regulatory Agency.

Bailey, labeled Nessel’s comments a “low blow” in an interview today but said he wasn’t offended.

“I’m a little disappointed that’s the tact our elected attorney general is taking on this,” Bailey said. “Instead of taking this above board, she wants to go in the gutter. That’s really sad, but I don’t take offense. I know what I’ve done, and I have license holders across the state that thanked me for the stances I’ve taken on the board.”

A press officer for the Attorney General’s Office said today that he hoped Nessel’s remarks would be reported as humor and in the context of addressing a marijuana industry audience.

Nessel called for a “moment of silence” for the board.

There was no shortage of other sharp-edged jokes aimed at what Nessel labeled a “cluster” regarding pot regulation.

Referring to the passage of Proposal 1 in 2008 legalizing recreational marijuana, Democrat Nessel said, “I would take everything Bill Schuette did after the passage of that law — but do the complete opposite of what that was.” Schuette, a Republican, preceded her as attorney general.

But she did not appear to be kidding when she said: “It’s not a very well-kept secret that, had it not been for the support I received from the cannabis industry, no way would I have been elected.

“It was your hard work, really that got me into office — that and our mutual dislike for Pat Miles. … Whatever happened to that guy? No one cares.”

Miles, a former U.S. attorney in Grand Rapids with an anti-pot stance, lost out to Nessel for the nomination at the Michigan Democratic convention.

Nessel lauded Whitmer’s recent executive order that abolishes the licensing. Whitmer is hoping the new agency will unclog a bottleneck for license applications created by the board structure and avoid continued licensing delays for marijuana entrepreneurs across the state.

The five-member licensing board has long shouldered widespread blame for the sluggish pace of the application process statewide. Many critics have suggested that the board members — Bailey in particular — had over-scrutinized applications.

Bailey, with 37 years of experience with MSP drug enforcement, has argued that dispensaries across the state needed to be shuttered while the licensing structure got off the ground. He was also known to examine juvenile records and shoot down pot shop applications based on criminal cases that had already been dismissed.

Bailey insisted he had solid reasoning behind every vote to deny each license.

Bailey said he was not “totally surprised” by Nessel’s remarks, “knowing how she has literally sold her soul to the marijuana lobby.”

“We’re absolutely in trouble,” he added. “The black market will explode unless law enforcement can get a handle on this.”

An online petition late last year garnered well more than 1,000 signatures urging Nessel to toss Bailey from the board before his term was set to expire in 2020. That’s now a moot point. The board — unless the Legislature overrides Whitmer’s order — will gather for its final meeting in April.

Bailey suggested his absence from the process would only lend to less stringent regulations and ultimately “open the floodgates” on shady marijuana businesses across the state. He also worries that would-be marijuana entrepreneurs — stacked with illegitimate business earnings — could continue to permeate the industry.

“The only way to speed up the process is to do less of a thorough background investigation,” Bailey said. “In many ways, we’re not going far enough on some of these applications. Everybody has their own experiences in life and business. Mine is in law enforcement, primarily in drug enforcement. I see how things can transpire.”

Despite his regulatory authority, Bailey — a former athlete — also noted he has never before smoked marijuana.

“Never,” Bailey added. “I knew guys that smoked weed. … I don’t really know why. I’m not opposed to it.”

(Check out City Pulse’s’ upcoming edition of its weekly radio show on at 10 a.m. Sunday on WDBM (88.9 FM) to hear Nessel’s recent remarks. It will also be available at lansingcitypulse.com/radio).