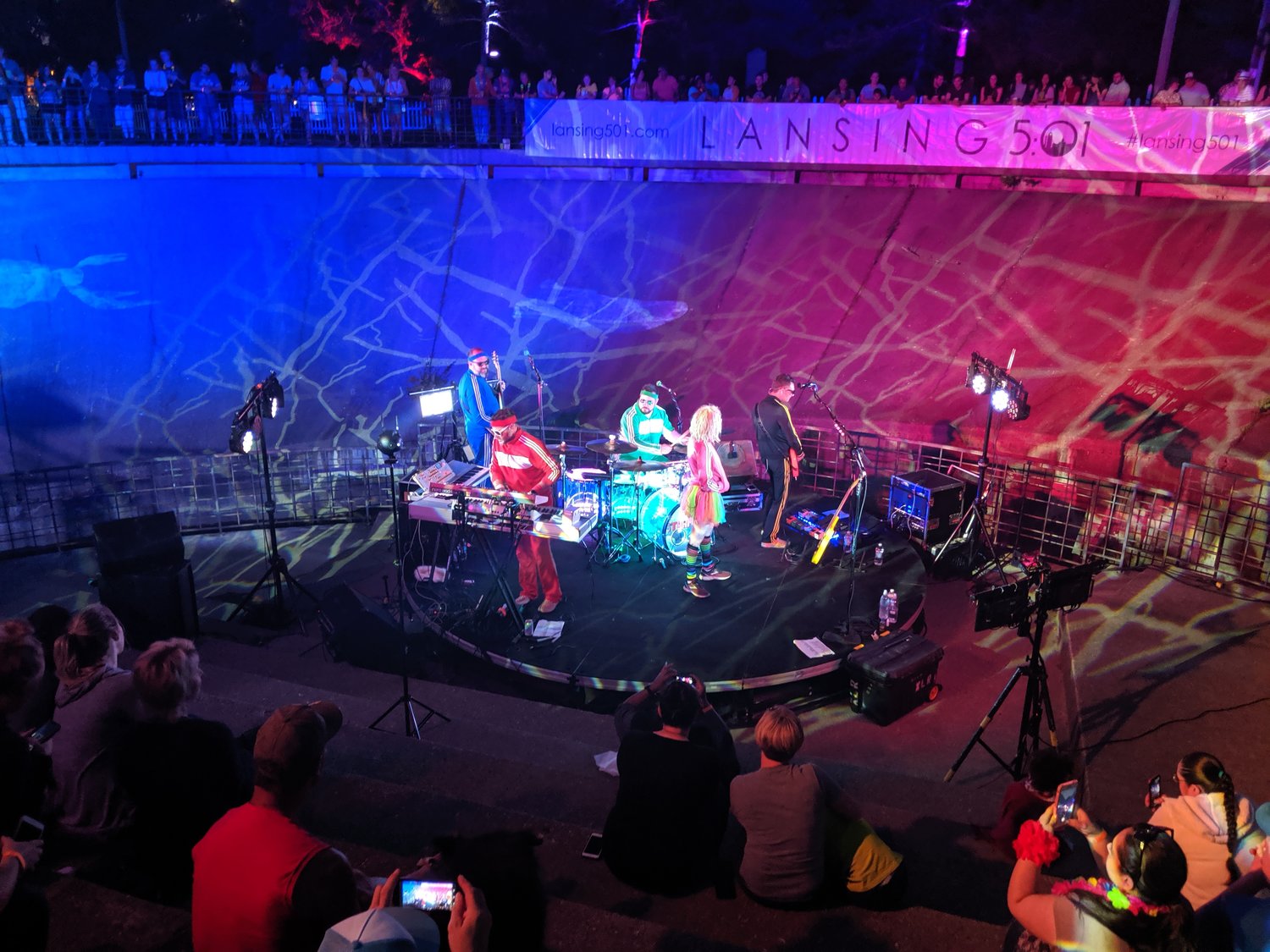 Plans are underway to construct a permanent stage at the Brenke Fish Ladder.
Courtesy
Posted Thursday, May 5, 2022 1:37 pm
Kyle Kaminski

THURSDAY, May 5 — Plans are once again underway to build an outdoor entertainment venue in Old Town at the Brenke Fish Ladder, this time with a permanent stage, seating and electrical systems that could play host to a series of “plug-and-play” concerts as early as next summer.

The Lansing City Council’s Committee on Ways & Means approved yesterday afternoon a state grant application that could provide about $183,000 toward the $1 million project. With at least another $183,000 set to come from Capital Region Community Foundation and other potential grant funds in the pipeline, officials anticipate construction could be underway as early as 2023.

For now, the city — and its taxpayers — are not expected to cover any of the costs. Officials at the Community Foundation expect private fundraising and other grants to fully fund the project.

“Part of our strategic direction as a foundation for the last five years has been to make Lansing a vibrant community, and improving our riverfront is a key aspect of that,” said Laurie Strauss Baumer, a top executive at the foundation. “This is a place where we can make an impact.”

Renderings showcase a variety of proposed improvements at Burchard Park.

Early plans call for retrofitting the Fish Ladder into a permanent stage for pop-up concerts like Dam Jam and Lansing 5:01, which are currently forced to install temporary fixtures in order to host their shows. Renderings contemplate an array of colorful accent lighting to illuminate the new stage and the dam — as well as a new storage area and an area for a new DJ booth.

The project would also include several improvements to nearby Burchard Park, including installing a concrete sidewalk, benches and a fireplace feature across a vacant chunk of grass.

The City Council is expected to approve the latest grant application to the Michigan Natural Resources Trust Program on Monday. If and when that grant cash starts flowing, Baumer is confident that private donations will be able to cover the rest of the overall construction costs.

“This is something the community has been talking about for years, and it’s being resurrected now because of these grant opportunities which could give us some big money to get started,” Baumer added. “If we can pair this grant with a county grant, then we’re rocking and rolling.”

Permanent lighting and electrical systems could be installed at the Brenke Fish Ladder.

The Michigan Natural Resources Trust Fund provides state funding for “natural resource protection and outdoor recreation.” By law, no less than 25% of the Trust Fund can be used for development of public recreation facilities — much like Burchard Park and the Fish Ladder.

Projects are selected based on their ability to provide increased access to natural resources, as well as their proximity to large population clusters. State officials also prioritize projects of “regional significance” including those that provide public access to local lakes and rivers.

The grants range from $15,000 to $300,000 and will be doled out in the next 18 months, sharing from a pot of more than $20 million that must also be appropriated by Gov. Gretchen Whitmer. The Trust Fund has distributed more than $1.2 billion since 1976, including about $38 million in Ingham, Eaton and Clinton counties. Last year, more than $2 million was distributed for projects across Greater Lansing — including a new $300,000 boardwalk and fishing pier at Hawk Island Park and another $300,000 to replace the boardwalk and install new signs at Lake Lansing.

Baumer said the Community Foundation is also pursuing various county- and federal-level grant opportunities to help cover the rest of the costs of building the entertainment venue in Old Town.

The Capital Region Community Foundation is dedicated to creating a more "vibrant" riverfront.

The Old Town Commercial Association explored plans for an outdoor performance venue — more of a bandshell — at the Fish Ladder in early 2019. Officials there said those plans were dashed after a feasibility study showed an inability to raise $750,000 to get the project finished.

Old renderings then showed a trapezoidal stage that could be as small as 33 by 20 feet or as large as 55 by 38 feet, complete with octagonal pillars and copper roof accents, reports the Lansing State Journal. The new plans show a stage that’s incorporated into the Fish Ladder.

Baumer said that more grant opportunities available this year have since shifted the fundraising outlook. She cautioned that the plans are still early, but she’s confident the project will be done.