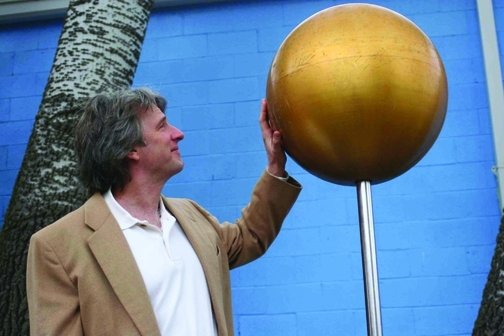 Posted Wednesday, May 8, 2013 12:00 am
Lawrence Cosentino
Audiences trust him. Musicians love to play for him. He digs the Lansing Lugnuts. Best of all, after seven years as Lansing Symphony music director, Timothy Muffitt has cans of symphonic whoop-ass he hasn’t even opened yet.

“The next few seasons are sketched out and I’m very excited about bringing them to life,” Muffitt said.

This week, the symphony announced that Muffitt’s contract has been renewed through 2016.

“A lot is lining up in favor of the orchestra,” Muffitt said. “I feel like the work we do is appreciated. Who would want to leave that?”

Bucking a national trend, the orchestra’s ticket sales are up 8 percent this year compared to last year, according to symphony general manager Courtney Millbrook. What is more, the number of subscribers has grown for the first time since Millbrook came on board in 2009.

Muffitt can get downy and delicate with Debussy, but he gravitates more toward massive symphonies by titans like Mahler, Bruckner and Shostakovich and judicious splashes of new music even Detroit doesn’t deliver.

“He has some considerable momentum going,” principal bassoonist Michael Kroth said. “Some orchestras can’t even get enough bodies to play these large works. He’s bringing the big orchestra back.”

Thursday’s no-doze season finale is a classic example of the Muffitt stretch, ending with a crushing suite from Sergei Prokofiev’s ballet “Romeo and Juliet,” assembled by the maestro himself. (See related story, p. 12.) “This is stuff you don’t usually hear,” Kroth said, sounding juiced from Sunday’s first rehearsal. “Since Tim has been here, we’ve done more interesting repertoire than we’ve done before.”

Audience loyalty is like pizza dough, and Muffitt knows how to knead it. “There’s plenty of stretch, but it’s not overstretch,” Kroth said. “Part of the job is to educate the audience and get them to come back for more. What he’s got going now is really terrific.”

Muffitt said both the symphony and the Lansing area are “on a roll,” and he wants in.

“At this point in my life I want to make a contribution,” Muffitt said. “I want the work I do to have lasting impact. The state of Michigan is an artistically receptive place.”

Muffitt sees signs of cultural and economic resurgence all over town, from contemporary art at Michigan State University’s Broad Art Museum to the artisan food at Red Haven restaurant.

“Getting a restaurant like that is like having a Webern symphony on the concert program,” he said, referring to the envelope-pushing concert scheduled for Nov. 9. (See related story, p. 11.)

Muffitt, 51, has been married for a year to his wife, Elise. He divides his time between Lansing and Baton Rouge, where he’s music director of the Baton Rouge Symphony. While in Lansing, he loves to go to Lugnut games and spends a lot of time in local nature spots like Harris Nature Center and Lake Lansing trails.

“You can get out of our semi-urban setting very quickly and be in a lovely place,” he said.

Where Muffitt’s conducting style is concerned, three players used the same five words to describe him: “It’s all about the music.”

“He brings the music to life in a way I haven’t experienced with too many conductors,” principal horn Janine Gaboury said.

“I love playing for him,” Kroth said. “He’s inspiring from the podium.”

Lisa Pegher was a guest soloist for a live-wire sprint through Joseph Schwantner’s Percussion Concerto in March 2008. She will team with Muffitt again next season for a concerto by Jennifer Higdon.

“He’s totally the opposite of the typical maestro-with-a-God-complex,” Pegher said. “He’s under-respected. He should be guest conducting in New York or Chicago.”

Like many orchestras based near university towns, the Lansing Symphony is a potentially awkward mix of long-time professor pros and young players fresh out of school. Muffitt has turned that potential implosion into a two-stage rocket, harnessing experience to guide enthusiasm.

“He can find a way to make all of those parties happy,” Kroth said. “He can work with seasoned pros and yet keep it warm and inviting for those new guys.”

Last month, Gaboury completed a circuit of freelance gigs with the Flint, Ann Arbor, Saginaw and Grand Rapids orchestras. She said Sunday’s rehearsal in Lansing came as a relief.

“He’s very professional and just feels more on top of things than the other orchestras I’ve played with,” Gaboury said.

Gaboury would like to see more concerts at other places around the city, higher pay that would help the orchestra retain top players and a goal that has eluded the orchestra for decades: a downtown symphony hall. “There are things that hold us back from really moving to the next level,” she said. “But it’s more to do with budget, not artistic direction or artistic level.”

Millbrook’s management strategy has been realistic: Hold the number of subscription concerts at six, let Muffitt the charismatic maestro generate buzz and let Muffitt the educator gently push the envelope.

The strategy is working. Ticket sales for the past season’s opener, with two piano concertos played by MSU legend Ralph Votapek, was “way over” expectations, Millbrook said. A March concert pairing Dvorak’s New World Symphony with a jazz-orchestral hybrid piece was also a big seller.  Even the tank treads of Shostakovich’s Tenth Symphony, epic centerpiece of an Oct. 10 concert, didn’t scare people away.

“Tim has moved the needle on what people’s expectations are,” Millbrook said. At the other end of the envelope, pops concerts, often with Muffitt’s enthusiastic participation, are reliable near-sellouts.

This season, a 74-year-old series of young people’s concerts returned after budget cuts forced them out of the picture for one season. Next year, the symphony will join Carnegie Hall’s Link Up program, long a staple of New York schools, to bring classical music programs to Lansing-area schools.

Generally, the maestro is game for whatever helps the organization, but there are limits. This summer, with a grant from the City of Lansing, the symphony will offer its first free Summer Pops concert in downtown Lansing. The theme, voted by audience members over the past season, is “Music of the ‘80s.” That’s the 1980s.

“I told Tim he could dress like ‘Miami Vice,’” Millbrook said. “I doubt he will.”