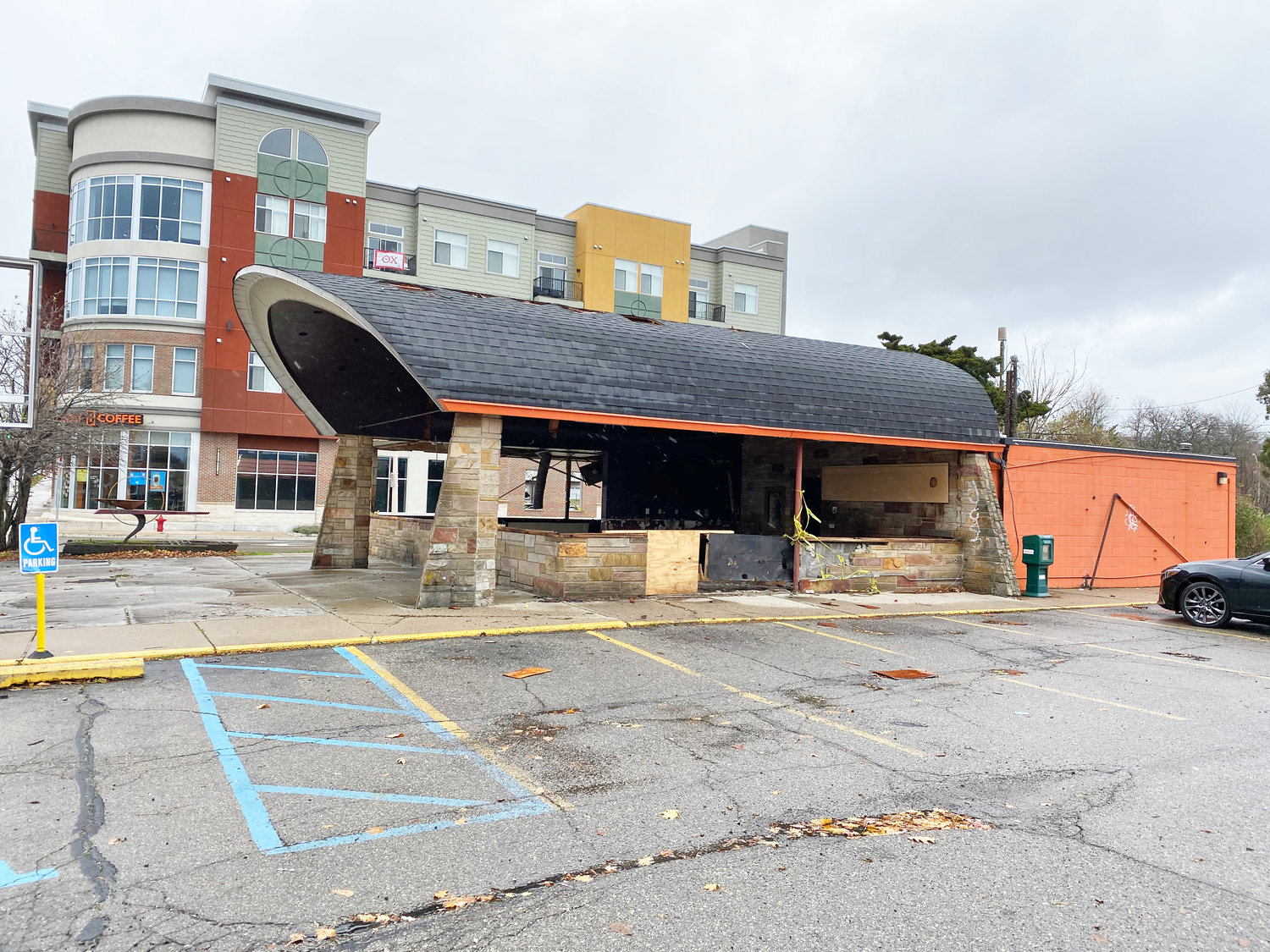 MSU Professor Susan Bandes, an expert on midcentury modern architecture in mid-Michigan, singled out the home of the original Biggby as important for both its style and as a community gathering place. It was built in the '50s as an Arby’s restaurant.
Courtesy
Previous Next
Posted Thursday, December 3, 2020 4:15 pm
SEAN BRADLEY

The iconic site of the first Biggby Coffee shop in East Lansing is set to be turned into another parking lot, despite concerns from public officials over the necessity of more surface parking. And even the owners of the property are starting to recognize that it may be an “atrocious” idea.

“Parking lots are a waste of space in my mind anyway,” explained Colin Cronin, vice president and co-owner of DTN Management, the owner of the former Biggby at 270 W. Grand River Ave. “A flat surface lot is about the worst use of space for value assessment and land use.”

The surface lot will replace what Susan Bandes, an MSU professor and author of the history book “Mid-Michigan Modern,” praised for its architecture. Built as an Arby’s in the 1950s, it became the first Biggby — then called Beaners — in 1995.

“Style aside, this building is an important community gathering place,” Bandes said in 2013, when it was first reported that DTN might tear it down for a development.

Architecture critic Amanda Harrell-Seyburn said in 2013 that the first cafe building is “iconic.”

“The vaulted roof arcs over the structure sheltering the activity within, its weight supported by two stone pillars channeling the look of a Conestoga wagon,” Harrell-Seyburn wrote for City Pulse. “During the day, materials, textures and structural interplay draws the eye. At night, the building glows like a lantern. It is bold architecture. The purpose-built structure was born from a forward-thinking, mid-century Arby’s restaurant. It represents a complete departure from previous architecture styles and is an example of the origin of today’s fast-food buildings.”

Seven years later, the building is set to be demolished in favor of a 39-space, 15,336-square-foot slab lot, according to a construction permit filed by DTN on Nov. 12. A teardown date isn’t set, but Cronin described his plans for rental parking as only temporary, at least until a better idea rolls around.

“The building is going down to the concrete slab,” Cronin told City Pulse on Monday. “This is kind of a low-priority site we’ll hang on to for a bit until we get a gee-whiz-bang good idea.”

A demolition permit has not been pulled. An incomplete construction permit for the parking lot, however, remains under review within the city’s planning department.

Tom Fehrenbach, East Lansing’s director of planning, building and development, said city officials have yet to receive a complete application for the project.

The timeline of the demolition and parking lot replacement remained uncertain this week as officials waited to gauge the environmental impact of the would-be demolition. If accepted, the application could head to the Planning Commission and later the East Lansing City Council.

However, some public officials are already growing wary of the plan as it’s still being developed.

“One of the issues is the imperviousness of it and the consistency of its runoff factors,” he said.

A busy parking lot creates pollution like rubber residue from tires, acidic emissions from car batteries and tossed cigarette butts, just to name a few examples, Lindemann explained. As a result, the environmental impact depends largely on how frequently the parking lot gets used.

The city of Lansing last year earned itself the title of the worst “parking crater” in the nation, according to a report from Streets Blog. The local landscape, consumed by massive swathes of street-level parking, is a model of inefficiency and wastes the city’s development potential, according to the nonprofit news group. Some fear that East Lansing could add to the problem.

One person who wants fewer parking spaces in East Lansing is James Anderson, a Michigan State University history professor who said he has long studied the parking issue in the city.

“A slab parking lot is strictly a transitional use. In other words, there’s something else coming down the line, whether or not it’s divulged,” he said. “What’s the endgame for the structure?’”

Ingham County Commissioner Mark Grebner represents portions of East Lansing and Michigan State University’s campus. He said East Lansing has always had a demand for easy parking options, but too often those opportunities get “piled up” into massive and unsightly garages.

“East Lansing has too much — and too little — parking at the same time because what people want is surface parking and what they get is ramp parking,” Grebner explained last week.

While a construction permit from 270 W. Grand River LLC. remains under review, company officials are assessing the existing building for asbestos and lead, city officials said last week. The electricity, gas and water will also have to be shut off long before the building comes down.

The building, Biggby’s first location in 1995, closed last December after 24 years in business. Shortly after closing, Biggby opened a location across the street at 300 W. Grand River Ave. Before the coffee was brewing, it was originally built in the 1950s to house an Arby’s restaurant.

Fathy Shetiah, the former and new location’s co-owner, said in December that it was getting difficult to maintain the space. He also said that he and his brother had been in conversation with DTN Management about moving out of the shop for the last five years.