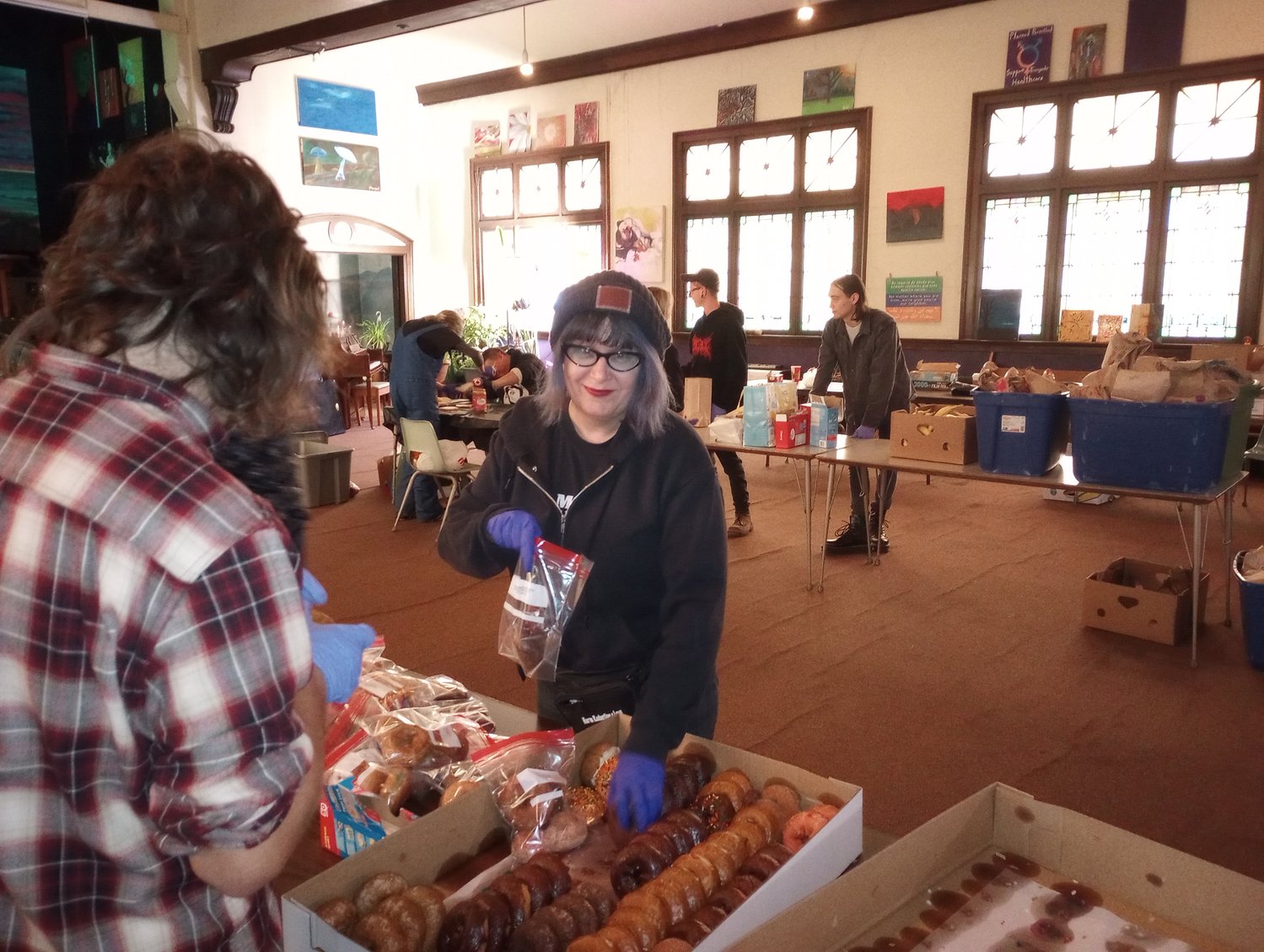 Julia Miller, one of the founders of Punks With Lunch and voted the No. 2 Best Activist in the Top of the Town Contest, helping assemble lunch bags for the homeless at The Fledge on a recent Saturday.
Todd Heywood/City Pulse
Posted Wednesday, November 16, 2022 10:57 am
Todd Heywood

It’s Saturday morning. Julia Miller is in what was the sanctuary of a former church on Lansing’s east side — now The Fledge, a nonprofit community center —  overseeing a group of volunteers putting together lunch bags for the homeless. At one table they’re slathering bread with peanut butter and jelly. Another table they’re packaging three donuts into sandwich bags. Miller is at a table wrapping French bread in cellophane.

It’s a form of controlled chaos, exactly the way Punks With Lunch started in Lansing five years ago. Miller wanted to do more for the homeless. While surfing Facebook, she came across the Oakland Punks With Lunch group.

After fruitless attempts to gain permission to use the group's name and ideas, she and her partner Martin Mashon decided it was time to just do it. The duo loaded up a wagon with 20 sack lunches and started wandering through downtown Lansing on a blustery Thanksgiving day. All the bags were gone soon enough, but what wasn’t gone was the thirst to do more to help the homeless in Lansing.

“After that, we started seeing more and more people join us,’ said Miller, 48, during an interview in the garden of The Fledge on an unusually warm November sunny day. From two people, the group regularly hosts outreach events with 15 volunteers.

As the number of deaths started ramping up from opioid addiction, Miller saw an unfilled need.

At Miller’s tiny office, she offers not only harm reduction tools, personal hygiene options as well as a non-judgmental space, but she also hands out Narcan, a drug that reverses overdoses, subsequently reducing deaths and exchanges used needles for clean ones. She takes in 500 used needles a week. She hands out 300 Narcans a month. Ten to 15 people a day visit her office for support of some sort.

The group is in its second year of a three-year federal prevention grant from the Michigan Department of Health and Human Services, which finances nearly everything but syringe purchases. The grant is funded with federal dollars, which cannot be used to purchase needles for an exchange program.

Lansing’s incoming First Ward Council member, Ryan Kost, has been doing clean ups in parks throughout the east side long before he ran for office. He met Miller when he needed a sharps container to safely dispose of the used needles he was finding.

“I can tell you that while I still find needles, the number I find has dropped dramatically since Julia and Punks With Lunch started their program,” Kost said.

Miller’s advocacy also led Kost to carry Narcan with him.

“It just made sense,” he said.

Punks With Lunch’s actions came from Miller’s desire to help, without being entangled in red tape. “We find ways around those things,” she said. “Sometimes, not in the way people expect or approve of. But it needs to get done, so we do it.”

The group clashed with city officials in 2019 over food distribution at downtown Reutter Park. The park, which is across the street from the Capital Area District Library, is frequented by the homeless. Punks With Lunch called city rules requiring permits and insurance obstacles to providing needed services in the park, reported the Lansing State Journal. City officials were deeply troubled when the group put in picnic tables, chaining them to trees in the park.

Punks With Lunch was ordered to remove the picnic tables by city officials, who claimed illegal activity, including drug use, was occurring at or near the tables. Punks With Lunch refused, leading to a standoff that was ultimately resolved with promises to revisit the issue in the spring. In 2020, the city put in picnic tables, and Punks With Lunch donated its tables to other organizations.

The group also has a food box in front of Everybody Reads bookstore on Michigan Avenue. It can’t be missed because it looks like TARDIS, the time machine featured on TV’s “Dr. Who.”

Scott Harris, owner of Everybody Reads, said the idea for the food box was spur of the moment. He, Miller and Mashon were brainstorming ideas.

“Julia said, ‘What about a TARDIS?’” Harris recalled. The idea was an instant yes among the trio. And it was soon installed, filled regularly with donated foods for anyone to help themselves to, day or night.

Harris said Miller is truly an embodiment of “radical love,” something Miller had concurred with during an earlier interview describing her work. “She does the work. She cares.”

Miller said that compassion has been long rooted in her eastside childhood.

“I was the kid who would see someone on the street and go home and tell my mom, ‘We need to get them a blanket,’ or ‘Do we have a jacket we can give them?’” It is just in her personality to care.

“I was always the one who wanted to help others,” she said.

That ultimately led her to Lansing Community College after graduating from Eastern High School. There, after toying with several options of study, she settled on human services. She was particularly keen to assist people fighting addiction.

But she had a major roadblock to that work. She would have to abstain from all substances, something she wasn’t ready to do.

“I wanted to help others. I knew their struggles, their frustrations. I was living it,” she said. “But I didn’t want to deal with my own issues.”

She’s since found a path to her own recovery, supported by a newer intervention than traditional abstinence-only 12-Step recovery programs. The program recognizes recovery flourishes for some without complete abstinence and focuses instead on what the individual is seeking in recovery — both in terms of how they define recovery as well as its importance to them.

Miller has been in recovery for nearly five years from the use and abuse of a variety of substances. That experience allows her to see past society’s views of the people she's serving, whether it’s drug user or someone newly homeless.

“I am just there to do what I can,” she said. “I check in with them when they come in. I check how they are doing, what their living situation is, and when there are points where I can help, I do. Sometimes, they just need to vent. So, I listen.”

As we were preparing for the interview, Gary, a client of her programming, stopped in. He needed a snack. Miller dug through a desk drawer revealing Cheez-its and a Pop Tart. A volunteer provided him with a bottle of Vernor’s.

“Look she’s cool,” Gary said of Miller. “She’s just got this vibe. She’ll do anything to help. It’s just like … you know, her energy.”