‘A vast unseen museum of toilets soon to be gone forever.’ 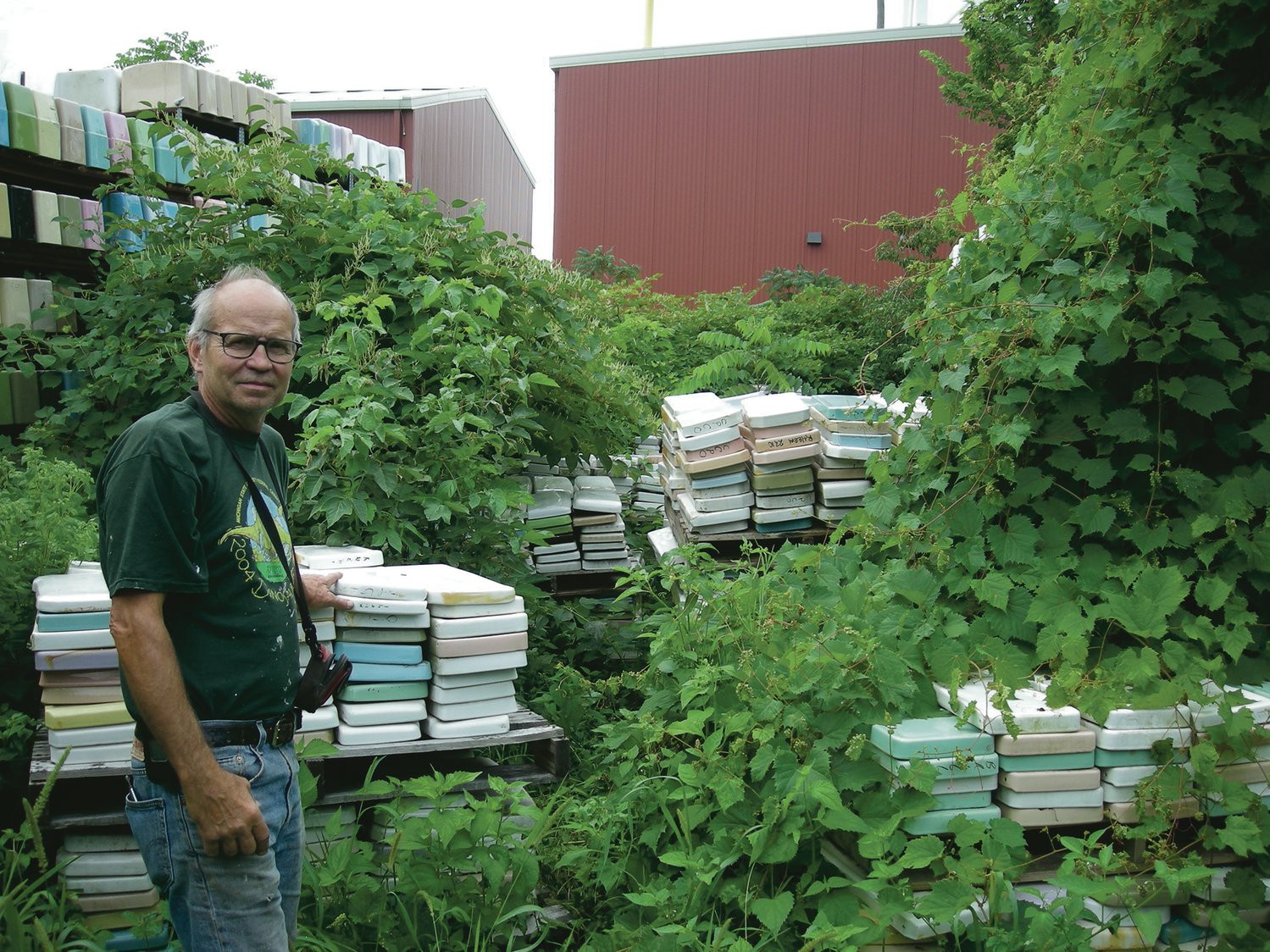 The writer of this reminiscence, builder Dave Muylle, outside at the old Jake’s New & Used Plumbing on South Street in Lansing, amid thousands of toilet tanks and lids.
Austin Muylle 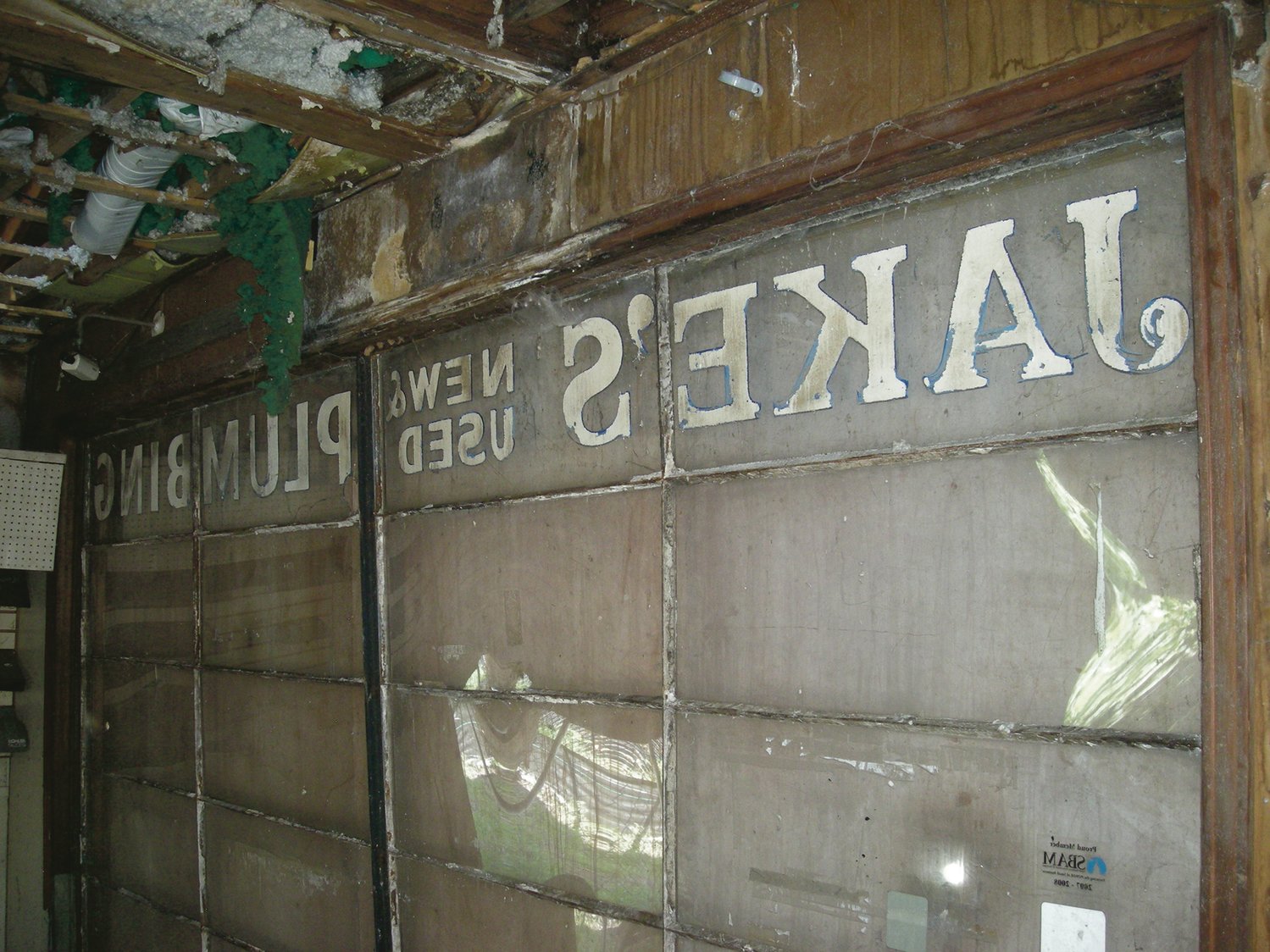 Inside Jake’s, now torn down after the death of 2020 of owner Kris Keeler, son of the founder, Marshall “Jake” Keeler, who died in 1999. Christman Constructors Inc., the next-door neighbor, purchased the property for storage in another building.
Dave Muylle 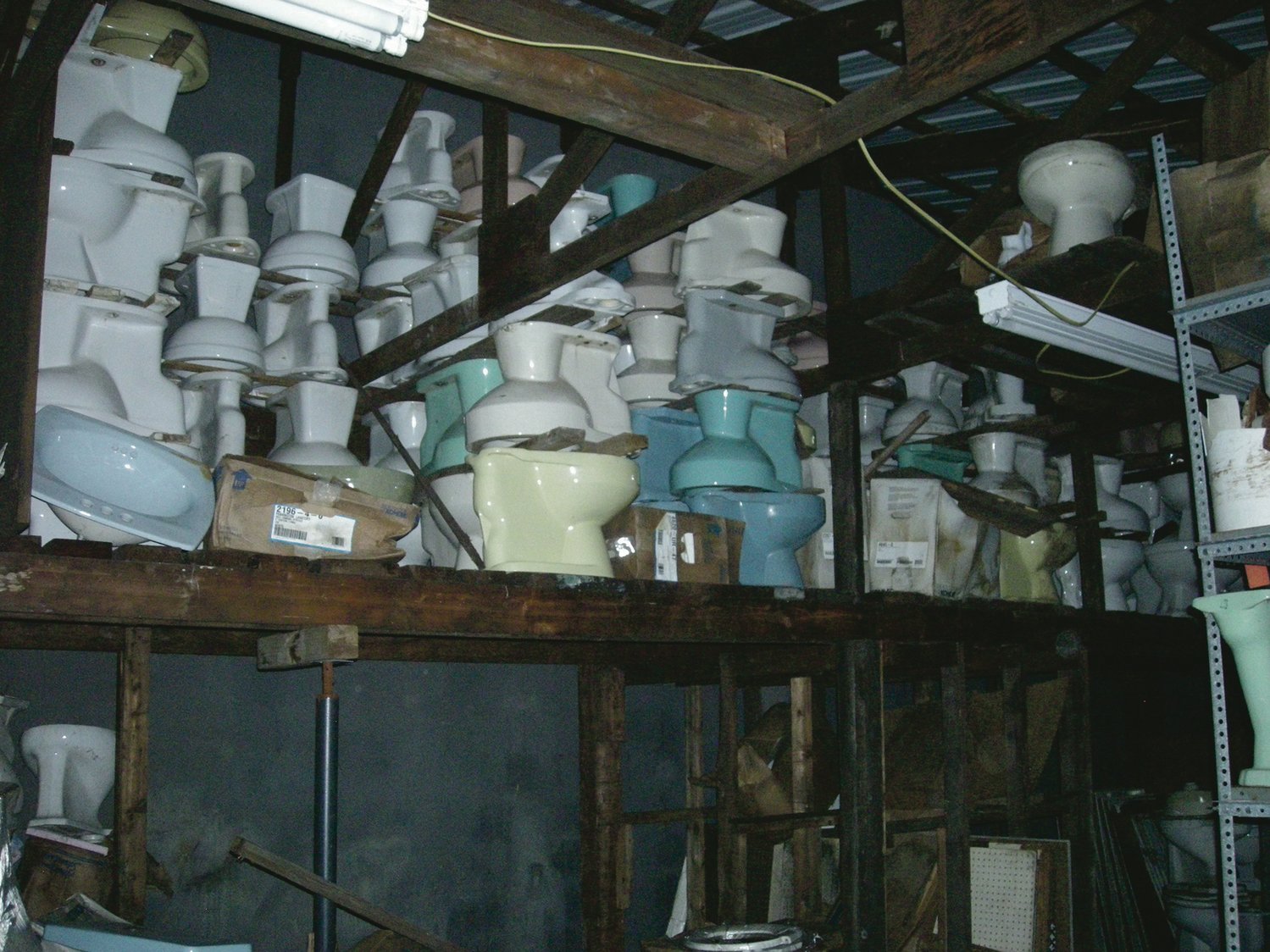 (The writer is a longtime Lansing builder who has been restoring homes for four and a half decades.)

Lansing residents of a certain age have fond memories of Jake’s New & Used Plumbing, which was at 306 E. South St. Founded by Marshall “Jake” Keeler in 1955 and, after he died in 1999, operated by his son Kris until he died two years ago, Jake’s was a Lansing institution. It was a classic father-and-son small business that reflected the personality of its sometimes cranky owners, but it was deeply loved by the Lansing community.

Patronized by plumbers of all skill levels as well as homeowners in distress, Jake and Kris solved our plumbing problems while treating us all with equal disdain or sympathetic understanding, depending on what we deserved.

In the course of my 45 years of old-house maintenance activities I was a Jake’s regular. When I started dealing with Jake in the late 1970s, I was just another wannabe plumber and he treated me accordingly. I kept going back, though, and he kept giving me my plumbing repair education.

One day after I had established myself as not completely incompetent, a group of customers including myself came through the door at the same time. Jake considered the group and, looking at me said, “I’ll take you first, you usually know what you’re doing.” This was one of the greatest compliments I ever received.

For the last couple of years since the business closed, I have driven by the empty, deteriorating building on South Street longing for those hot summer days when I would walk into the store and find Kris shirtless, packing a pistol and about ready to throw the phone against the wall after talking to some unreasonable customer on the other end of the line. I also would wonder what was going to happen to the doomed building and its contents. I wished I could get inside just one more time to say goodbye. On a recent Thursday I got my wish.

Aug. 19 was sunny and mild, and for the heck of it, I stopped and got out of my truck to walk around the chain-link fence that is up to keep gawkers like me out. Curious, I eventually walked to the business next door to see if they knew anything about what was happening with Jake’s building. I got lucky. Turns out they had bought the property and after hearing my story a representative of the firm graciously granted me access to the site once I signed a “Release of Liability” form. He gave me a brief tour of the two 20-by-60-foot buildings where Jake's Plumbing had operated and explained that my timing was fortunate since one of the buildings was slated to come down soon. He said I could take as much time as I wanted if I would just lock up when I left. I was in a combined state of mourning and ecstasy.

In the east storage building, I found a Venetian pink 1940s-era American Standard toilet with a mismatched seat. I dragged it into the light of the doorway and sat on it to write this description of what I saw.

In the storage barn where I was sitting were hundreds of used toilets. Carefully stacked in the south end of the barn were the bowls and tanks. In the north end were the tank lids meticulously labeled and organized in custom shelving. Every available storage spot was filled. It made me wonder if they had ever sold any of these used toilets. These toilets were all different models, brands and colors. There were hundreds more behind the building embedded in a tangle of overgrown weeds. It was a surreal sight indeed. The result of a lifetime of acquisition and organization. A vast unseen museum of toilets soon to be gone forever.

The creaky, old, wood front door was boarded up but still has its large window protected by a piece of industrial strength wire mesh. Rookie customers who came through that door and saw a sales counter with chest-high piles of broken plumbing parts and scraps of paper that looked like fallen leaves probably thought “hopeless chaos.”

On the east wall behind where the sales counter once stood were stapled several sales tax licenses dating from 1968 and notes written in Kris’ hand. Several signs that I remembered were still up. “If it weren’t for your plumber you would have no place to go”  and “If we don’t have it you don’t need it — Jake.” Reading those signs told the customer pretty much all they needed to know about Jake’s Plumbing.

Looking around I spotted another special item still hanging on the wall. Mounted on a dark-stained pine board was a clipping from the Lansing State Journal. It was a piece written by Mark Nixon in 1980 about Jake Keeler for the Onlooker column. It starts with “The legend of Jake the plumber is alive and well and living in Lansing.” Nixon described his experience with Jake and his own exasperation when Jake told him to “bring in all the parts”! Later in the article Nixon sized up Jake with this paragraph:  “There are a lot of poor people in Lansing who owe thanks to Jake’s volunteer plumbing. His dealings with customers may have all the tact of a lead pipe but for the underprivileged his heart is as soft as plumber’s putty.” There was one more interesting thing about this item. Stuck on the bottom of this piece of pine is a sticker that reads “WARNING: High Stress Area.” Put there by Kris, no doubt.

The rest of the main entrance/showroom is now gutted and moldy. However, it was here that for 65 years Jake and Kris Keeler reigned as the kings of the used plumbing and repair business in Lansing.

Walking to the back of the building past the collapsing shelves and debris I saw cutting oil, tools, sinks, porcelain escutcheons, rows of catalogs, shower heads, bib washers, a sheet of lead, shovels, and a shoe. I paused in front of a workbench where I imagined Jake and Kris standing for hours rebuilding a customer’s old Kohler faucet and making it as good as new.

Returning to my pink writing station, it occurred to me that I was finally seeing the secret storage areas that I always wanted to peek into. Back in the day when I was at the counter and would show Jake or Kris the part I needed, they would say, “I’ll be right back.” I always wanted to say, “Can I go with you?” I wish they were here now to explain all this stuff.

One other amazing thing that I turned up was a photo dated 8/18/95 of Kris, Jake and another guy. Tucked way in the back of the east storage building where the smell of old toilets and mold was at its most pungent, I found a small table. On it was a stack of photos. All but one had been ruined by time and moisture. Maybe it was Kris, or maybe something more cosmic, that had placed this Polaroid photo of father and son in the place they had spent so much time together. It was a delicious find for sure.

There will never be another Jake’s Plumbing. It is important to remember Jake and Kris Keeler and to remember their efforts to make sure all Lansingites “have a place to go.”