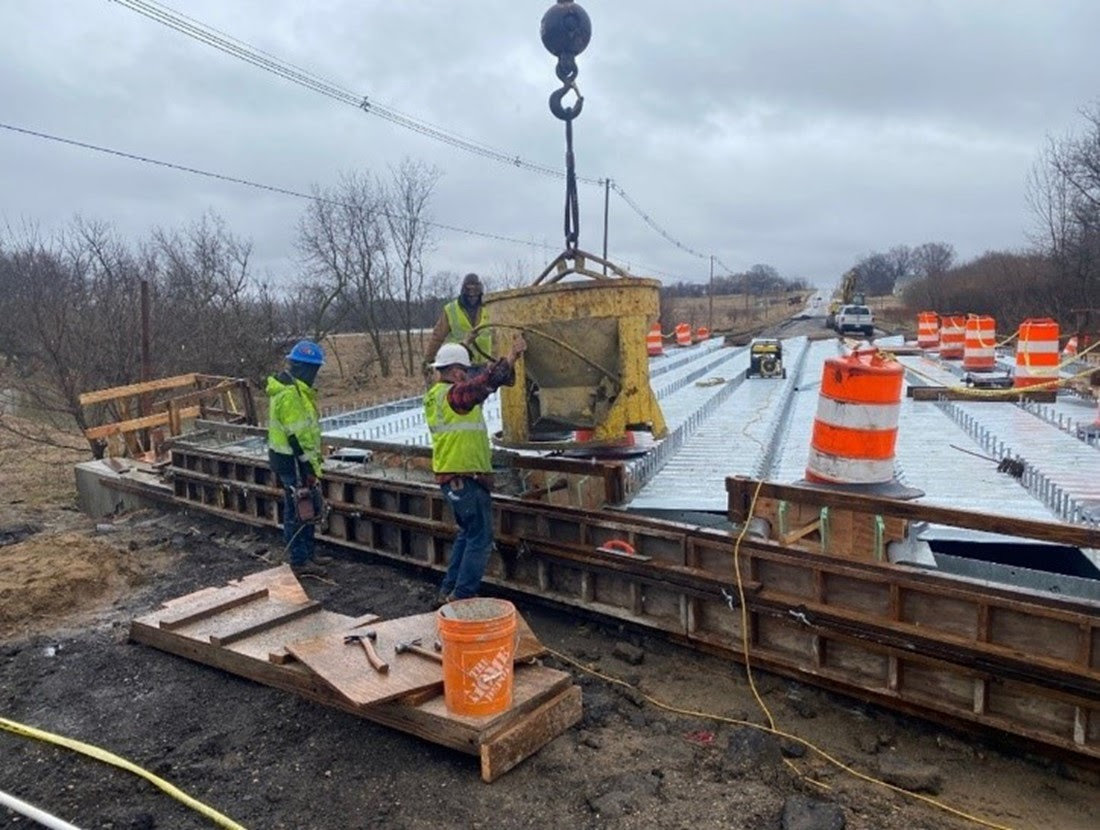 Repair work underway on the abutment for the Byron Road bridge over the Black River in Ottawa County.
Michigan Department of Transportation
Posted Saturday, April 23, 2022 12:00 am
SYDNEY BOWLER

A recently launched bridge bundling program by the Department of Transportation (MDOT) will tackle those numbers and is expected to repair up to 78 locally owned bridges that are in serious or critical condition, according to Dan Weingarten, the MDOT Superior region communications representative.

The pilot program, which began early March, will start repairs for 19 bridges this year.

The bundling program covers multiple bridge locations under one contract and repairs are already underway at five of the 19 bridges in Jackson, Macomb, Lapeer, Clinton and Ottawa counties.

“Michigan has aging bridge infrastructure and we have faced decades of underinvestment. Basically, bridges have been deteriorating faster than we can repair or replace them. This has created a growing inventory of bridges in poor condition,” said Weingarten.

The 19 bridges in Phase I were deemed high priority, Weingarten said.

“People should not worry when they cross over or under a bridge. Bridges are inspected regularly and, if the bridge is open, it’s safe. MDOT and local agency bridge owners close unsafe bridges,” he said.

The repaired bridges could last up to 50 years before needing to be fixed again and could potentially last even longer with maintenance projects, Weingarten said.

The second phase of the project could repair or remove up to 59 other bridges. This phase focuses on closed or weight-restricted bridges, according to MDOT.

“The pilot project is being funded by Federal Highway Improvement Program dollars. Then, late last year, $196 million in federal COVID relief funds were appropriated,” Weingarten said. “This will allow the state to execute Phase II of the bridge bundling program, beginning later this year.”

The program has been backed at all levels, from federal to state to local.

“This is the most supportive program from the state for local bridges that I’ve ever seen,” said Wayne Harrall, the deputy managing director for engineering at the Kent County Road Commission in a press release. “The MDOT Bureau of Bridges has engaged with local agencies from the beginning, before there was even funding allocated to the effort.”

The County Road Association says the program is a great concept and would like it to bear some fruit in cost savings, according to Ed Noyola, its deputy director. The association represents 83 road agencies and provides legislative, operational and engineering advice.

But its main concern is that the project may run out of funding before work on all bridges is complete.

“Costs have gone up exponentially, and it’s a problem,” Noyola said. “The cost of material and labor is just going through the roof, and bridge projects are probably the most costly of all the road work that’s done that’s gone up.”

Weingarten said federal COVID relief funding for Phase II requires the money to be allocated by 2024 and spent by 2029, and MDOT intends to finish Phase II by then.

According to the National Bridge Inventory, a U.S. Department of Transportation database, there are 11,284 bridges in the state.

MDOT estimates it would cost $2 billion to get all state-owned bridges up to good or fair condition, and an additional $1.5 billion to do the same for all local government-owned bridges.

Weingarten said that MDOT bridge staff and consultants are doing the design and construction administration work, as well as providing engineering and contract negotiation expertise.