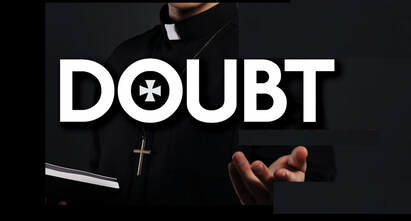 Throughout Riverwalk Theatre’s offering, a single word is repeated.  Each time, it takes on a new meaning.  And each time it makes us think.

The word is “doubt” and the John Patrick Shanley play “Doubt, a Parable” is full of thoughtful — and sometimes disturbing — moments. The Riverwalk production does a marvelous job of engaging its audience’s minds and senses.

“Doubt” is the first indoor production for Riverwalk since the March 2020 pandemic shut the world down. Only half of the main auditorium’s seating is being offered for the play, which continues through Oct. 17. Audience members are distanced and required to wear masks.

From his opening appearance as Father Flynn at the pulpit lecturing about the bonding qualities of doubt, Adam Woolsey is convincing. His masterful portrayal of Flynn earns our affection and our mistrust. Woolsey’s performance skillfully reinforces our doubts about Flynn’s guilt or innocence.

Because Amy Rickett’s portrayal of Sister Aloysius Beauvier seems so real — and the character’s lack of doubt is so unwavering — it’s easy to doubt the Beauvier’s motives.

Rickett shines the most when — as the principal of the St. Nicholas School — she expresses her stern convictions. That helps make us have doubts whether she or Flynn is the true villain.

Gay Oliver as Mrs. Mueller strongly depicts a mother who wants the best for her son. Oliver’s standing up to the principal is a highlight of the 90-minute-with-no-intermission play. Her impressive forcefulness makes it clear that Mueller won’t accept claims based solely on doubt.

Sister James — played with realistic compassion by Cassie Little — is wracked by myriad doubts. The goodhearted, yet inexperienced teacher questions her teaching, loyalties, character judgments and more. Although Sister James is so unsure of herself, there is no question about Little’s performance.

Robinson keeps the intensity simmering instead of overpowering. His direction mixes mature themes with humorous moments. The blocking and deliveries never get in the way of the potent script.

Precise and effective lighting by Ted Daniel and substantial sound effects by Tim Daniel add to the quality of the production. So do authentic and sophisticated costumes by Kris Maier and Ashley Hampton.

Robinson says in his director’s notes that “Doubt is not inherently negative or positive. Its influence is how we respond to it.” Since Riverwalk’s “Doubt” in its entirety stimulates our eyes, ears and minds, our response can only be positive.