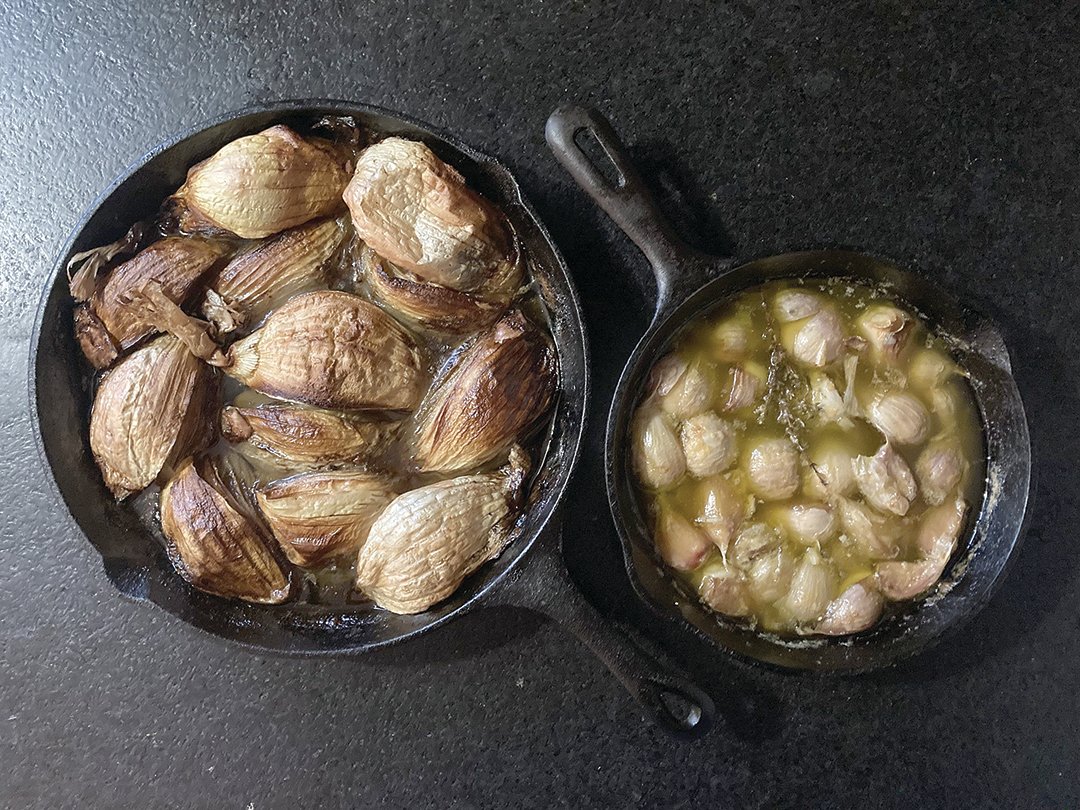 French onion soup is the world’s most elegant dish. Not the kind of elegance you’d find on a white tablecloth with extra silverware, but elegant in the sense that scientists use the word. Like when a simple equation can express the relationship between matter and energy with as few ingredients as a pot of French onion soup.

Onion, wine and butter are some of the most flavorful materials in the universe. Add energy in the form of heat from your stovetop, and plenty of time, which some people call the 4th dimension, and thyme from the garden, where that tough little herb stays green deep into winter.

Those three primary ingredients, plus herbs and salt, play off each other to become something greater than the sum of its parts. The acidity of the wine cuts through the fat, while the onion infuses that harmonious balance with pungently sweet and richly caramelized flavors. Perfection is the only plausible outcome.

Thanks to that unimpeachable protocol, the hardest part of French onion soup is keeping it secret while you’re baking the onions. Because if the word gets out, those juicy, layered slabs of flavor will go missing. And how can one keep it secret when the aroma of even a pedestrian version of this delicacy can pass through walls?

Meanwhile, I have a proprietary version that includes garlic, which amps the flavor up to eleven.

Both garlic and onion are members of the allium, or lily family, which explains why garlic fits in with the other ingredients of my version of this soup, which I call Rocky Mountain Lily Broth.

I strain out the remains of the onions, garlic and herbs, leaving a thin, featureless broth that I use as much as an ingredient as dish. Sure, you can serve it with a crostini and melted cheese. It’s a fun thing to do with lily soup. But that’s just the beginning. Like any broth or stock, this liquid is useful in countless ways.

I recently cooked a piece of tough meat on the bone in a pot of lily broth. It was the perfect medium, impregnating the meat with its juicy flavor. And then again, as a chaser, using it to wash a mouthful of food, like a sip of wine that invigorates me rather than puts me to sleep. I’ve used my lily broth to make plov, a Central Asian precursor to rice pilaf. And from time to time, I even use it to make an extra-flavorful French Onion Soup Au Gratin.

This luxurious liquid is a broth that can double easily as a soup. A stock, by contrast, has no salt or fat. Either way, it’s useful, versatile, delicious and nutritious.

A bottle of white wine, preferably from the south of France

For Au Gratin, a crusty slice of white bread, and grated melty cheese.

Preheat the oven to 300. Cut the onions from end to end into quarters, removing the dry skins. Cut the bottom scabs off the garlic cloves but leave the skins on, so they hold the cloves together down the road.

Separate the garlic heads into cloves. Cut off the scabs at the bottoms and put the trimmed cloves into a small baking dish, along with a half stick of butter, a cup of olive oil, a cup of wine and a sprig of thyme, and bake for about an hour. Add the onions to a large baking dish or sheet pan, with a cut side on the pan, along with a cup of oil, a cup of wine, a stick and a half of butter and a few sprigs of thyme. Bake for three hours.

Remove the garlic cloves ahead of the onions because they can get bitter when overcooked. They should still be bright white when you take them out.  Onions can also overcook to a bitter place, but it takes a lot longer, and might be impossible if they are immersed in butter and wine, all of which will be completely absorbed by the onion eventually.

When the onions are done baking, they will have brand new dried peels and insides full of luscious juices. And like those onions, those roasted garlic cloves are also a flight risk, especially when they figure out you can smear it on toast.

When all of the alliums have thus been cooked to absolute perfection, prepare a pot of beef or veggie stock or broth and bouillon — the only meaningful difference being how much salt and oil they contain. That’s why we haven’t added any thus far. We’ll add it before serving as needed.

Add the baked onions and garlic, along with all of their juices, and the rest of the wine, to the pot of stock. I use a pasta basket insert for this, which allows me to easily pull out and remove the solid parts of the broth, including all of the garlic and onions, instantly leaving behind a thin, versatile broth.

If you want to serve it the way normal people serve French onion soup, with bread and melted cheese, then ladle up a serving of soup into a bakeable bowl and turn the oven to broil. Smear a clove or two of garlic onto a slice of bread and place it atop the soup. Sprinkle the bread and soup with a quarter cup of grated cheese per bowl, and broil for about 7 minutes, or until the cheese has fully melted and started to brown, with the bread that isn’t covered by cheese starting to toast. Set aside to cool, so nobody burns their mouths, which they would do, because they would be insatiable with that aroma in their faces. When it’s cool enough that your guests can dive in with lustful abandon, serve it.