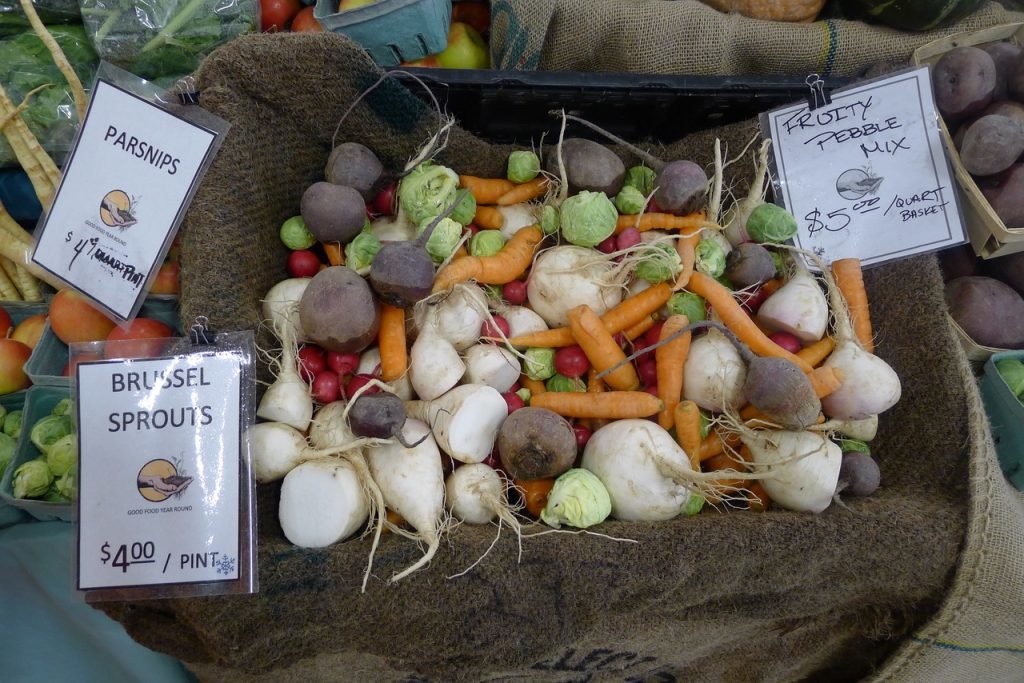 I was on the hunt for the Winter Pebbles, an assortment of turnips, potatoes, carrots, beets, parsnip and winter radishes that some enterprising farmers at the market sell as a mix. They look like a basket of gleaming jewels. They remind me of Fruity Pebbles, the breakfast of Flintstones.

Storage crops are typically harvested in the fall and kept cool and fresh all winter. Homesteaders would store these tubers in aptly-named root cellars, along with squash, sides of bacon, apples and whatever else they could squirrel away. The pandemic has made us contemplate various end-of-the-world scenarios, and brought out the inner “prepper” in many people. It sounds fun and romantic, but the diet could get old, and any viable attempt to live off the land would mean coming to terms with turnips, and some of the other harder-to-appreciate roots, including celeriac, rutabaga and Jerusalem artichoke.

I had been thinking about Winter Pebbles a lot after they first caught my eye, and had decided to buy some at the next market. Alas, my farmer friend broke the sad news: early that morning, as he was transferring the winter pebbles from their burlap sack into their quart cartons, a gentleman made an offer on the entire sack. The offer was accepted, and the pebbles were gone.

“Oh well, next week I guess,” I said. “Unfortunately, that’s it for the season,” he replied. They were now out of turnips and storage radishes for the year, which means the Winter Pebbles could no longer be complete.

So there I was, forced by fate to do what I could have done all along: buy a bunch of different roots, and mix them together myself.

But I kept wondering: What was the gentleman going to do with that huge sack of Winter Pebbles?  It’s one thing to buy a small amount of Winter Pebbles and cook them right away, but storing a diverse assortment of root crops in the same bag like that can be risky. Each type of tuber will have different storage needs. Radishes, for example, do better in plastic bags, while potatoes, garlic and many others prefer mesh.  If you’re buying a large volume of roots and planning on storing them, it’s actually wiser to buy and store them separately.

Winter Pebbles is more of a way of cooking than a specific mix of roots. It’s a way of getting to know what’s local in winter, and of tasting the flavors of the land, or the terroir, if you will. You may not be able to pronounce it, but you’ll know it when you taste it.

Visit your market and keep your eyes peeled for your local “Winter Pebbles” mix, or create your own by choosing from different stands.

Tossed in olive oil, salt and pepper, and roasted at 350 until soft, those combined roots create an array of delicious flavors. The bitter flames of turnips and radish create a sharp contrast to the sweet, mellow carrots. Maybe next time you’ll skip the turnips. Or add some of the honorary root crops like squash or Brussels sprouts.

If that is not enough micromanagement for you, here is a recipe for a root tart from Kate, the co-inventor of Winter Pebbles.

5 Brussels sprouts, sliced in half

Preheat oven to 400. Toss the sliced roots in oil and season with salt and pepper. Arrange them in a single layer on a baking pan. Roast until golden and tender, about 40 minutes. Remove from the oven and allow to cool.

Cook the sugar in 2 tablespoons of water in a thick-bottomed saucepan on medium heat, stirring as necessary to prevent burning, until the mixture is amber colored, about 8 minutes. Turn off the heat, add the vinegar and a pinch of salt, and stir it in.

Pour the vinegar into a 9-inch pie pan. Scatter the sage and rosemary over the caramel. Arrange the sliced roots artfully atop the herbs, using pieces to stuff the holes. Sprinkle with the onion slices and crumbled goat cheese. Cover the whole thing with the rolled dough, and bake it at 400 for another 20 minutes, or until the dough is nicely crusted.

Remove from the oven to cool, and invert the pan over a plate to serve.