A GOP senator told a heart-wrenching story about a hometown bar hurt by COVID-19 orders. But almost none of it was true. 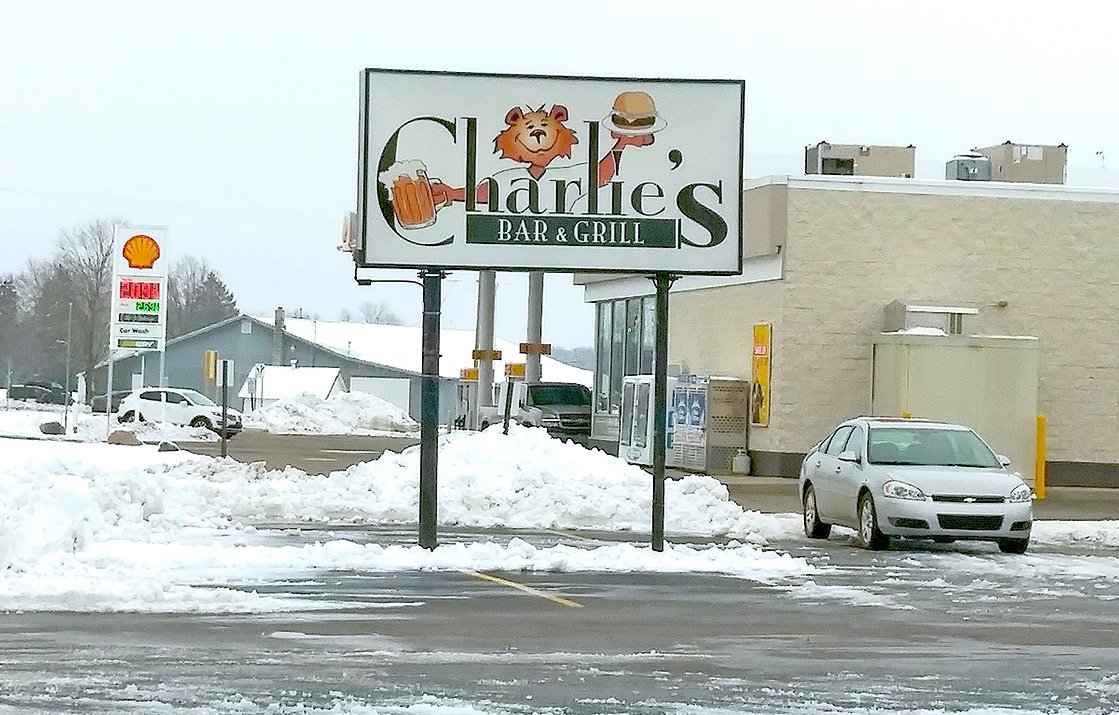 Charlie's Bar and Grill in Potterville has been serving a 30-day suspension of its liquor license since Dec. 14. Claims the violations were a result of an "act of human compassion" have been proven false.
Todd Heywood/City Pulse
Posted Wednesday, January 6, 2021 12:02 pm
TODD HEYWOOD

(This story originally appeared, in a slightly different format, at the Michigan Advance online site, www.michganadvance.com.)

A floor speech by state Sen. Tom Barrett, R-Charlotte, last month alleged that Michigan Liquor Control Commission inspectors preyed on the “human compassion” of the owners of Charlie’s Bar and Grill in Potterville by suspending its liquor license for operating despite a state-ordered shutdown during the pandemic.

Barrett’s video has gone viral in conservative circles as evidence of the abuse and overreach of the state government in the age of COVID-19.

The problem? The story Barrett told is untrue in all aspects except one: Liquor Control did suspend the liquor license of Charlie’s Bar and Grill on Dec. 14.

Barrett stood on the floor of the Michigan Senate on Dec. 18 and told “a story about a business in my district.” Here’s the entire speech, as recorded in the Senate Journal:

“Recently, a man dropped by Charlie’s while some employees were taking a break inside. ‘I had a couple of guys who were helping me out. During the downtime, I had them come inside and eat a couple of sandwiches,’ said John Devine who’s the manager. ‘While they were inside, a man approached them. The man told John that he was really lonely and asked if he could have something to eat. John and his wife felt bad for the man and served him a meal.”’

“I wish I could tell you that this act of human compassion went relatively unnoticed and was simply a long list of unrecognized good deeds that are done on behalf of our fellow men and women every day. But not in 2020 and not in Gretchen Whitmer’s Michigan, where it’s always winter and never Christmas. Instead, we learned that the man who walked in asking for a meal was actually playing an elaborate ruse. He was an enforcement officer with the Liquor Control Commission dispatched to lay the screws to guys like John just trying their best to survive. A couple of days ago, John learned that he had his liquor license suspended. Merry Christmas, John.”’

Devine, the manager of Charlie’s, made the same allegations in an interview with WLNS TV  in Lansing.

“Devine says a man came in and said he was lonely and tired of being stuck in the house,” that station reported on Dec. 16. “Him and his wife felt sorry for him and allowed him to sit down and eat, but what they didn’t know was he worked for the Michigan Liquor Commission, which then suspended the restaurant’s liquor license.”

According to testimony provided during a Dec. 23 hearing before Administrative Law Judge Michael St. Johns, the agent from Liquor Control stopped at the bar on Dec. 3.

Video of the agent’s visit showed the investigator leaving his vehicle, entering the bar and saddling up the bar. A woman with a young child strapped to her chest and no mask on approached the investigator and provided him a menu.

The video revealed that eight adults were unmasked, eating food and being served alcohol in violation of the state’s pandemic emergency orders from Michigan Department of Health and Human Services Director Robert Gordon. Those orders prohibit indoor dining and alcohol service in an effort to stop the spread of COVID-19.

“The accusations are false that the investigator posed as a poor, hungry, person in need,” she wrote in an email.

When the investigator explained why he was there, John Devine, the manager, became angry and began to berate the investigator as a “communist motherf---er” and a “traitor.” The incident was caught on the body camera video released by the Potterville Police Department.

St. Johns, the administrative law judge, called the outburst, which was played during the hearing, “extremely disturbing and disappointing.” He later called Devine’s behavior “reprehensible.”

Charlie Devine, John’s brother and the owner of Charlie’s Bar and Grill, admitted the violations contained in the suspension on Dec. 23. St. Johns ordered a 30-day license suspension and a $600 fine. John Devine also was ordered to produce a written apology to the inspector he verbally abused.

“This is you getting off lightly,” St. Johns told the bar owners. “There are going to be severe and substantial consequences if there are further violations.”

Both John Devine’s story and the one relayed by Barrett are false.

Devine admits that he did not personally hear the alleged story. “I was working in the kitchen,” he told the Advance. “I have to rely on what my wife told me.”

He said her observations were backed up by “the guys at the rail” while the investigator was ordering. Video of the actual order was not made part of the public hearing record.

The men that were being served when the inspector was present were bar regulars who had helped him with some upkeep on the bar.

“I mean, we’ve been in business for 25 years and we’re in a podunk town in the middle of nowhere,” he said. “These are guys who call us and tell us they won’t be in because they have the flu or diarrhea or — you know what I mean? They’re like family.”

He declined to say whether he would write a letter of apology to the investigator, as required in the settlement agreement with Liquor Control and directed by St. Johns, the administrative law judge.

He maintained that the violation, which “we stipulated to,” was minor and “not like we were out there advertising we were open and serving people in violation of the orders.” He calls the actions “tyranny.”

WLNS News Director Jam Sardar said of his station’s reporting: “We take our commitment to the community and the accuracy of our news product very seriously. It appears that new information has come to light to discredit the owner’s recounting of the events. We have immediately taken this story off of our website and will be investigating this further in order to follow up and provide the complete story.”

Click here to listen to the full audio of John Devine.