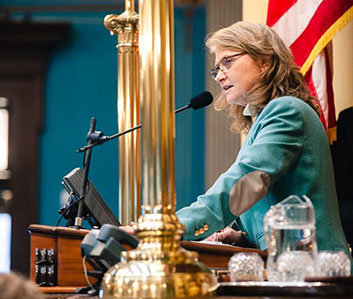 Her voice cracking with emotion, Sen. Lana Theis talked about how today’s children are being exposed to almost unspeakable subjects and material.

Speaking on our MIRS podcast this week, Theis was near tears as she tried to explain why she signed off on a campaign email that suggested fellow Sen. Mallory McMorrow was a “progressive social media troll” who was interested in “grooming and sexualizing kindergartners.”

“It is precisely because I am trying to protect our children that I’m standing in this space, and you’re right, that language was edgy — you might even call it snarky. I had intended some edits, which didn’t make it through, but here we are. It was never intended to call the senator those things.”

But she did. And McMorrow responded with a Senate floor speech that went viral. Hillary Clinton even boosted it at one point.

“I am a straight, white Christian, married suburban mom. I want my daughter to know that she is loved, supported and seen for whoever she becomes,” she said. “I want her to be curious, emphatic and kind. People who are different are not the reason that our roads are in bad shape after decades of disinvestment or that health care costs are too high or that teachers are leaving the profession.”

Instead of Theis raising money for her campaign against ultra-right-winger Mike Detmer, it was McMorrow who raked in more than $200,000 for her reelection in about 36 hours.

Theis, as the chairwoman of the Senate Education and Career Readiness Committee, is being sucked into the latest social conservative vacuum. The modern movement toward LGBTQ lifestyles is being not only accepted but explored by teenagers.

Society is continuing its evolution toward being more accepting toward others. As expected, some are having a hard time with it. Politically, conservatives pounce on it.

Today it’s LGBTQ in youth. Yesterday it was transgender people in bathrooms. Before that, it was gay marriage. Prior to that, LGBTQ people, in general. You can go all the way back to interracial marriage or busing.

Fear is used in politics all the time. This time, it’s preying on the fears of parents that …  do you want your child to be gay?

McMorrow talked about this when we had her on the podcast.

“What I think is being inflated in a very, again, fear-mongering moral panic kind-of-way is (that) people in the world exist,” she said. “I think that just showing kids that people exist and that everybody is worth … that is not the same as teaching sex acts to children, which is not happening.”

What is happening is youths are talking about these issues among themselves. Their friends are non-binary, for example. They are using “they” pronouns without thinking about it.

If a friend is exploring a same-sex relationship, it’s becoming almost no different than a boy-girl relationship.

Added on top of this is how the boundaries in literature are also being pushed. Remember when “The Catcher in the Rye” was a big deal because of the language?

Consider now the graphic and disturbing rape scenes in books like “Push”. This was made into the 2009 film “Precious,” and it’s in some school libraries.

It only adds fuel to the conservative panic. To them, this is pornography, not a story of a teenager overcoming horrible odds to receive an education.

“They’re providing gender confusion” in pre-kindergarten through third grade. “It’s causing the gender fluidity that’s going on. We never had this issue before. They desensitizing kids to highly sexualized conversations that are incredibly inappropriate,” Theis said.

But just as we all survived the racy material when were young, our youths will do the same. They will learn, accept and advance. Just as we did.