Flash in the Pan: Spud bisque 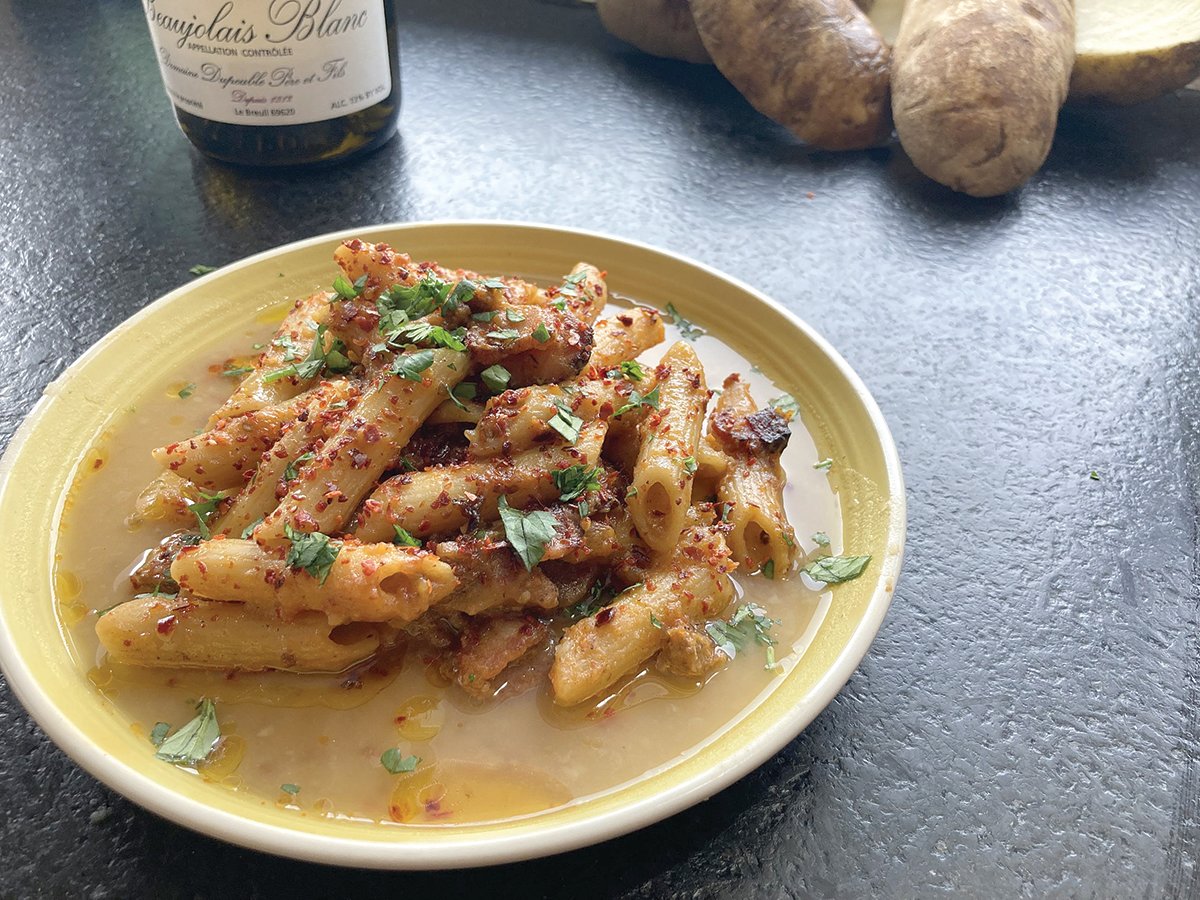 Congee is a pan-Asian dish beloved wherever rice is grown. It goes by other names, and it comes in many different flavors, but the core principle never changes. Cook the rice into a starchy cloud, flavored with the likes of ginger, chives and hoisin sauce. Eat it when comfort food is called for.

I live in the Northern Rockies, where the spuds grow diverse and delectable, and farmers like Big Nancy bring multi-colored sacks to the winter market. Nothing against rice, but I wanted to make congee with local starches. I bought a bunch of different varieties, including Huckleberry, Mozart and Rose Finn, along with a few other wintertime ingredients, and brought them back to my laboratory of culinary science. That is where I invented spud bisque. It is as thick as any roux-based soup, with a grounding, fungal flavor. It’s completely satisfying served as is, with a garnish of chopped greens and mayo, and the kids love it, which is the ultimate threshold to clear. It’s also very useful as an ingredient. Think of it as a stock that thickens. Gluten-free.

The single most important tool to have for soup making is a big pot with a pasta boiler insert that you can remove, along with its contents, from the bubbling cauldron. I make a lot more soup than pasta, and I use the pasta insert every time. It allows for the cooking of every part of the plant or animal in your soup, including parts some find unsavory, like bones or cartilage of a take-out chicken, or the root end of an onion or the non-root end of a carrot, or the butt of celery. You can cook those parts as long as you wish, letting their goodness into your soup, and then remove them whenever you like.

The other most important piece of “souping gear” is an electric pressure cooker – like an Instant Pot. This device will cook anything to the point of softness, including beans, bones or potatoes. When making spud bisque, we want the potatoes as soft as smoke. One hour in the pressure cooker and the potatoes – or what’s left of them – are ready for the pasta cooker, and the second part of the recipe.

My favorite way to use spud bisque is to start by frying diced carrot, celery and onion in an olive oil. Then add diced meat from the chicken whose bones were in that pasta boiler. After about 10 minutes, add some spud bisque. Simmer 15 minutes. If you like chicken pot pie, you will love this stew.

The other day, I was making spud bisque in the pasta cooker and as luck would have it, the kids wanted spaghetti. They got rigatoni because that’s what I had, and I had to make their pasta the old-fashioned way, boiled in a regular pot and poured through a colander. I topped it with a sauce made with rehydrated tomatoes I had dehydrated last summer.

The next day, I reheated the leftover pasta, beginning with some chopped bacon in the pan, like one should do when reheating pasta. When the bacon was crispy, I added the noodles. It was going fine, but there wasn’t quite enough sauce. It seemed to be heating too quickly, and the thick sauce was in danger of burning, so I dumped a ladle full of potato broth into the pan, and disaster was replaced with the pleasing murmur of starchy potato broth invading the rigatoni and sauce.

Cooks often use starchy water from the pasta pot to thicken the marinara. Potato broth thickens the sauce even more, giving each morsel of rigatoni a creamy flavor reminiscent of gnocchi, a pasta made with mashed potato. The bacon with which I had started the project, intended as a nod to carbonara, also turns out to be a perfect complement to potato soup.

This soup is beloved by the kids, who are the toughest taste testers in town, and by cooks, who realize this potato bisque can go in anything. My wife even makes potato sourdough rolls with the stuff.  Make a double batch and freeze some for later. I wouldn’t give it more than three days in the fridge.

I use a mix of russets, which atomize the most easily, mixed with some boutique varieties to make the flavor more interesting and complex.

2 pounds of potatoes, peeled and cubed

2 large onions, sliced in half end to end

3 large carrots, cut in half

3 stalks of celery, or the butt end of a celery head after the stalks were cut off

Cook the potatoes in at least a gallon of water in the pressure cooker for 60 minutes, or simmer in a pot, covered, until falling apart. At least two hours.

While that happens, preheat the oven to 350. Place the onions in a small pan, cut sides down. Add the butter and wine and bake for about two hours.

When the potatoes are done cooking and have cooled to the point where you can work with them, pour the pressure cooker contents, including the water, into the basket of a pasta cooker. With an appropriate utensil, mash the potatoes in the pasta basket. Add the carrots, celery and thyme to the mashed potatoes in the basket, and enough cold water to cover everything. Bring to a simmer. After an hour, stir it very well to help the remaining potato pieces break apart. Add the onions and butter, rinsing the pan with full ladles from the pot to make sure all the onion and butter juices make it to the pot.  Simmer for an hour or two. By that time most of the potatoes will be in small enough pieces that they can filter through the pasta strainer and into the broth below

If using meat, bones or stock, add them along with the carrots. But if you want the cleanest, purest potato stock for use in cooking other dishes, then you might want to skip adding bones or bouillon. The potato stock is the flavor, and the thickener, that you can add to whatever is next.