State health officials caution on spreading monkeypox outbreak in US

State medical director asks clinicians and those at risk to watch for symptoms, get tested 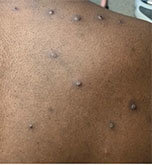 WEDNESDAY, June 15 — State health officials are calling on clinicians and people at risk for monkeypox, particularly gay, bisexual and other men who have sex with men, to be on the look out for symptoms of the viral infection and get tested.

Monkeypox is a close relative to smallpox. It is found usually in rodents in west Africa. For most people, an infection is mild and can be treated with a recently approved vaccine. But in Africa the death rate is as high as one in 10 infected persons.

In the U.S., 48 cases have been identified. Another 32 countries have reported a total 1,432 cases as of Tuesday, according to the Centers for Disease Control. A significant number have been found among males in the LGBTQ community. The CDC has placed the risk of significant spread of the virus at "low" because it requires close contact to transmit.

"We have not seen a case in Michigan," said Michigan Medical Director Natasha Bagdasarian in an interview. "It is likely spreading in the state, but we are not really testing for it or necessarily aware of it."

The virus causes a rash, which then blisters and fills with pus. Those pustules then burst the blister scabs over. The virus is transmitted by close touch. Initial symptoms include fever, headache, muscle aches, backaches, swollen lymph nodes, exhaustion and chills. It was first identified in the 1970s as smallpox vaccination began to eliminate the deadly virus from the continent. Physicians began to notice a lesser pox-like infection, which was ultimately called monkeypox.

State health officials caution on spreading monkeypox outbreak in US