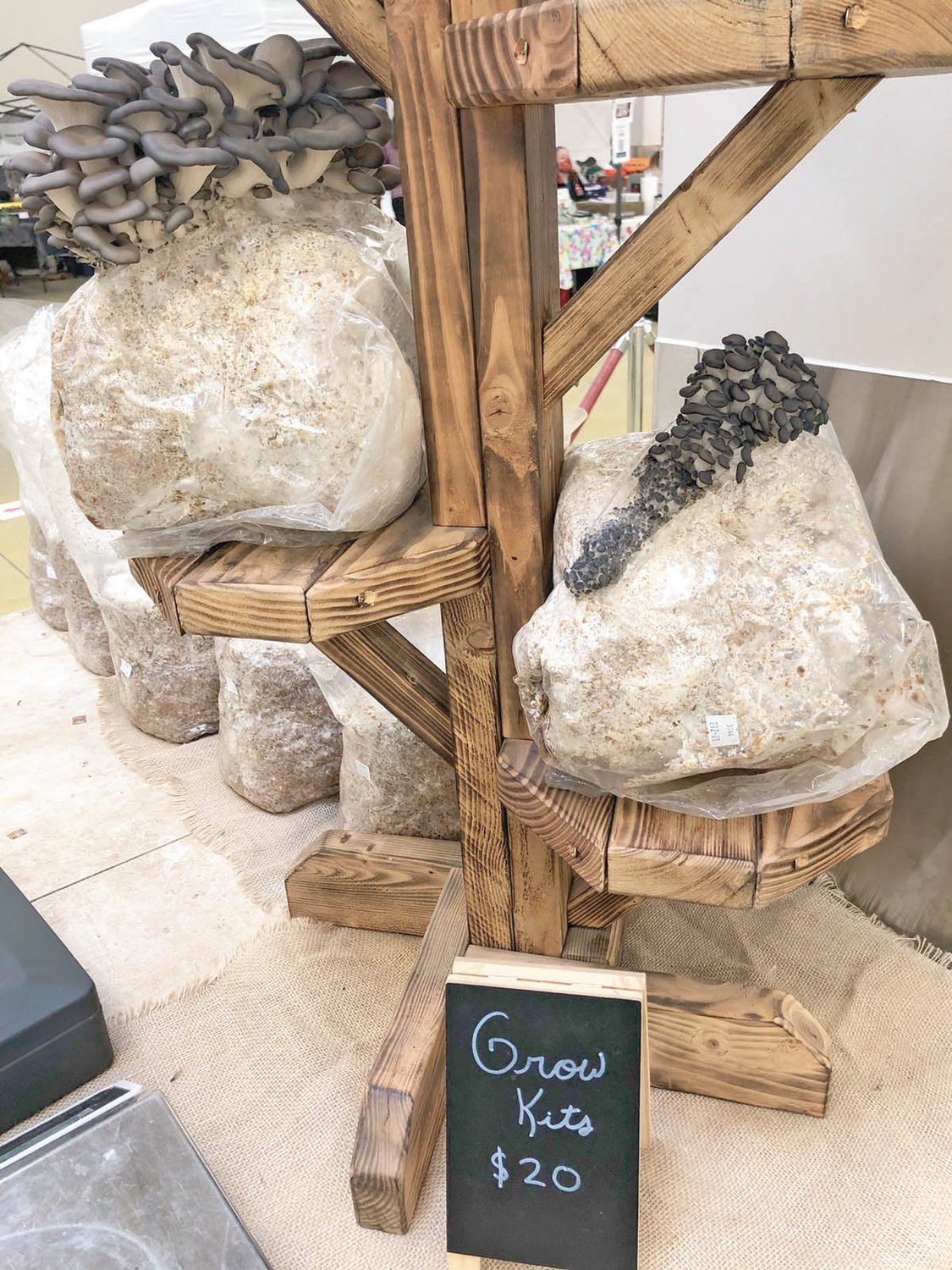 As the dark days of the year chase us indoors, we look for ways to stay connected to the earth. Seed catalogs, houseplants, frozen broccoli from last year’s garden — all reminders that life goes on, and will come back around.

Let’s add mushrooms to the list of wintertime ways to plug into the cycle of life. They can be grown anywhere, which is why small mushroom farms are sprouting up everywhere, like mushrooms after a rain, connected via a large subterranean brain.

At the farmer’s market a few months back, I bought mushrooms from a serious-looking grower with a stand full of differently shaped and colored shroomage. They were displayed in baskets like floral arrangements, each type of mushroom with a different shape and color, including lion’s mane, chestnut and several varieties of oyster. The mushroom grower was noticeably cleaner than the dirt farmers, and after I learned a bit more about mushroom farming, that made sense.

Mushrooms, the fruiting bodies of underground fungal mycelia, don’t need light to grow, which makes them an obvious part of a well-rounded winter garden, and also a bit more of a science project. Family farms, you could argue, are kind like a giant compost pile, where bacteria move freely from dirt to compost to crops. This is not an unsafe situation, as bacteria and fungus spores are everywhere, and we live with them – a truth that is especially obvious on the farm. But mushroom growers, while riding the same chaotic life-forces, must be vigilant against contamination, so the wrong spores don’t take hold. While a farmer plants seeds in dirt that is essentially an extension of the compost pile, a mushroom grower inoculates substrate under aseptic conditions.

There is an important distinction, he shared, between commercial mushroom varieties like white button and portobello, which both belong to species agaricus, and the varieties that most small growers like himself prefer. Agaricus grows on compost, which could be made of a lot of different things, including manure, which raises the question of where the manure was collected. If it’s from the stable at track where the racehorses do their business, there could be antibiotics, steroids and other chemicals. Whether the nitrogen comes from manure or chemical urea, using compost adds uncertainty.

Our mushroom grower only works with mushrooms that grow on sawdust-based “woody substrates,” which are dirt free, which explains why he looked cleaner than his dirt-farming neighbors.

As we paid, my son asked if the mushrooms could be eaten raw.

“I believe mushrooms should be cooked to do justice to their flavors, and also to make their nutrients more accessible,” said the grower. “Mushroom cells have rigid walls that keep the nutrients from being absorbed, but heat will break down these walls and release the nutrients.”

He added, “If you want more of a raw feel to the mushrooms, he suggested, give them a light sauté in oil or butter with white wine or balsamic vinegar, and serve them on a salad, where you can still feel that raw freshness while also accessing all of the nutrients.”

I was looking to serve my mushrooms with meat, so I wanted something lustier. I ended up cooking them in butter, with minced onions and nutmeg, deglazing alternatively with dry sherry and chicken stock, and finishing with a squeeze of lemon and some drops of cream. I cooked them with sliced button mushrooms to bulk it up, like I always do with precious or semiprecious fungal fruiting bodies. You end up with more, and it won’t dilute the flavor.

Last fall, he began selling mushroom growing kits at the indoor farmers market. The rough size and shape of a loaf of bread, these logs of compressed wood chips and mushroom mycelia are wrapped in plastic and ready to sprout when spritzed. They are fun and satisfying to grow, like any garden. You watch it develop and change, and you get so many mushrooms. We brainstormed for friends to give kits to as presents.

Wherever you are, locally grown mushrooms and grow kits are probably available at the local farmers market. So keep your eyes peeled. They will brighten your winter.

On the longest, darkest night of the year, we left grow kits on the doorsteps of friends. A few weeks later, a jar of mushroom pate showed up on our own doorstep, made by one friend who had successfully grown and harvested her own mushrooms from the kit. She said the recipe came to her in a dream, which seems fitting. These are, after all, the days of darkness. And these are the dark arts.

Smooth, thick and meaty without the aid of cream cheese, this pate is lovely on toast or crackers. If you don’t have a food processor and have to chop, you might not achieve pate status. In that case, call it a mushroom salad.

Makes about a cup

Toss the mushrooms in the olive oil, salt, pepper and garlic, and bake at 375 for 15 minutes. Let cool. Add the lemon and onion, and puree in a food processor or by chopping. The blender makes it too smooth.