Should longtime downtown eyesore be demolished — even for a vacant lot?

The murals have been the only improvement in the structure at the corner of Allegan and Grand avenues since purchased in the 1997 by a limited liability company associated with the Granger Group, a suburban Grand Rapids developer.
Todd Heywood/City Pulse 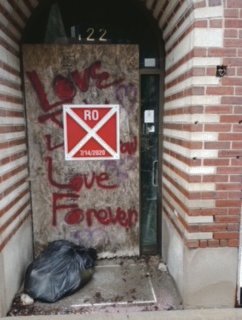 Once the entrance to hotel, this door features a red tag attesting to the deplorable conditions inside and out of the old Neller Building.
Todd Heywood/City Pulse 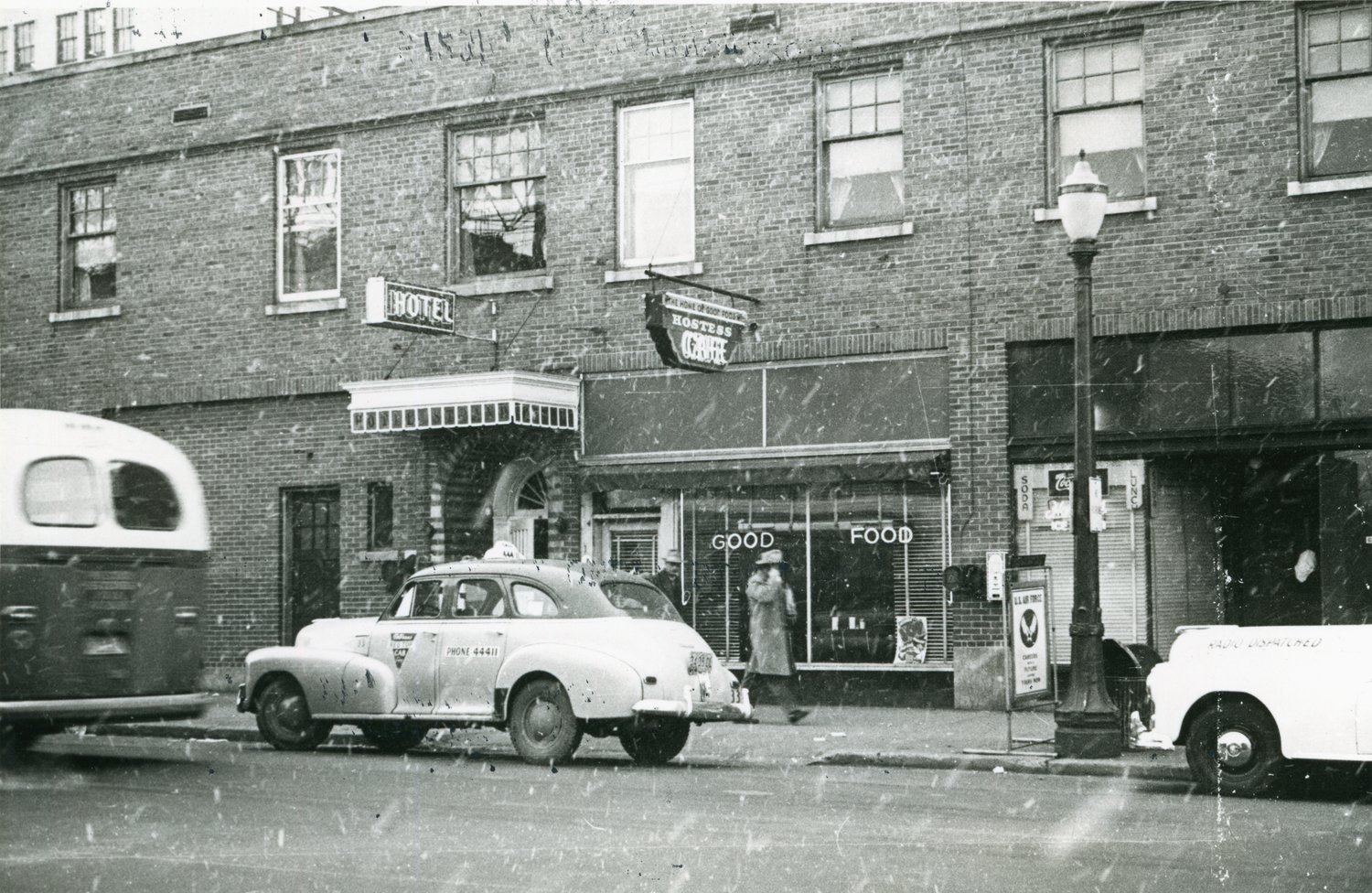 This photo from 1948 shows the Neller Building in its glory days.
Courtesy of CADL Local History
Posted Thursday, September 22, 2022 12:01 am
Been red-tagged?

If you own a residence in Lansing that has been red-tagged by city inspectors, you are liable for paying $150 a month in fines until you’ve remedied whatever led to the zoning violation.

But if it is a commercial property, the fine goes away.

City Pulse tripped across this discrepancy in reporting on the fate of the Neller Building. Administration spokesperson Scott Bean said the owners have not been charged a cent for so-called monitoring fees even though it was red-tagged in 2018. He said he does not know why, but the city does not assess the fee in the case of commercial buildings or property.

To which Lansing City Councilmember Patricia Spitzley had this response when asked for comment: “What the fuck?”

Jen Estill, owner of Redhead Design, bought the historic Nelson Building at 113 S. Washington Square. She was eager to center her communications company in the hustle and bustle of Lansing’s downtown. But, when she walks out her back door, she takes in the view of the Neller Building on Allegan Street.

“It’s falling down to the point where glass litters the ground and trees are growing out of the building,” she said. “I just can’t understand who would let that happen. I don’t understand a property owner who let that go like that.”

Gary Granger might know. Granger is chairman and CEO of the Granger Group, a suburban Grand Rapids developer whose motto on its web page is “A History of Excellence.

Summit Associates II is a limited liability company that owns the Neller Building — whose address on file with the state of Michigan is the same as the Granger Group.

But Granger is not talking. Efforts to reach anyone at the Granger Group for comment on why the Neller Building has been allowed to decline into downtown’s biggest eyesore were unsuccessful.

The 1938 property, whose official address is 122 S. Grand Ave., sits at the corner of Allegan and Grand, across from the city parking ramp. It has played host to everything from restraurant and hotel to a bus depot and business offices over the years. Walter Neller Enterprises sold it for $865,000 in 1997 to Summit Partners LLC — for which Gary Granger was listed as resident agent. Summit Partners gave it to Summit Associates in 2005.

It was deemed a “dangerous building” in 2016, according to City of Lansing property records. In 2018, it was red tagged and boarded up.

Since then, nature has taken its course to reclaim the property. Plants are growing in the windows along Allegan Street pouring out in a massive bundle of greenery from the top. Peeking inside, trees and other vegetation can be seen growing literally from the floor. One can see right through to the back of the building and into an area where the building once had a basement. That’s been removed, but not filled in, resulting in a one-story-deep crater. That crater is fenced in, but it’s become a small, thick forest of trees and vines. The west wall, along an alley of the building, is cascading with vines and flowers. During a busy summer, it’s a veritable pollinator convention with hundreds of insects of all ilks feast on the nectar.

Much of this damaged building is hidden behind large art murals put up by the owner in part to mask the broken windows and raw plywood that had been the exterior.

“It helps,” said Estill of the murals. “But it masks the actual danger. To hold it over, protect people from harm because the property owner isn’t moving forward. Yes, that helps in certain ways. And it tides you over for a while.”

Even those are now warping and beginning to suffer from the elements. The lipstick on the proverbial pig is fading; but city officials are caught between two difficult choices.

Lansing Mayor Andy Schor said his team has been trying to work with developers since he took office the first time five years ago. The owners have offered a litany of proposals on a near-annual basis, officials said. But none have come to fruition. Schor acknowledged in his time in office some of that may have been delayed by the pandemic and the shifting economic outlook.

Schor acknowledged the property is a blight, pointing out it was worse when he took office. The murals were temporary, he said. And still the owners are dragging their feet, presenting new proposals, but not following through. The building gets worse. The pit out back attracts more trash. Nature claims a little bit more of the building, while Schor and his team discuss the future of the property weekly during administrative development meetings.

The concern, and the internal battle, is one of balancing the safety of the building and the impact of an empty space. It’s called infill in relation to urban planning, the mayor said, and it’s key to revitalizing and stabilizing downtown.

“When people come downtown, they expect to see buildings,” Schor said. “An open vacant lot doesn’t show activity or the potential for activity. Lansing has more parking lots than any other city.”

That distinction is one made by USA.StreetBlogs.com in 2018. Schor said he has already told developers if they tear the building down without any plans, they cannot plan on turning it into a parking lot.

If developers wanted to put in a parking lot, they would have to get a zoning waiver from the City Council — something Schor said he would not support.

“I have told them, it will not be another parking lot,” he said.

“You don’t allow red-tagged buildings to languish; to give a pass to commercial buildings,” she said. “We are always under fire. Of giving special treatment to one group or another. We don’t need evidence that we are actually doing it.”

She said she would not support turning the property into a parking lot either.

Considering Summit Associates owns eight properties that are alleys or parking lots, Schor’s expectation is not unreasonable. In fact, the company owns the parking lot at the corner of Michigan and Grand avenues, a block away. It was once home to Jim’s Tiffany Place, a downtown eatery where lawmakers would retire after sessions to socialize, drink, smoke and hammer out tough deals. The restaurant closed in 1993.

In 1995, according to the Lansing State Journal, the 112-year-old building met its fate with a wrecking ball. Developers Van Martin and Gary Granger told the Journal the empty lot would be replaced by a 15-story brick and glass office building.

Administration sources acknowledged that City Pulse’s inquiries about the Neller Building spurred the city to push a more aggressive timeline. Those sources were not authorized to discuss administration internal deliberations.