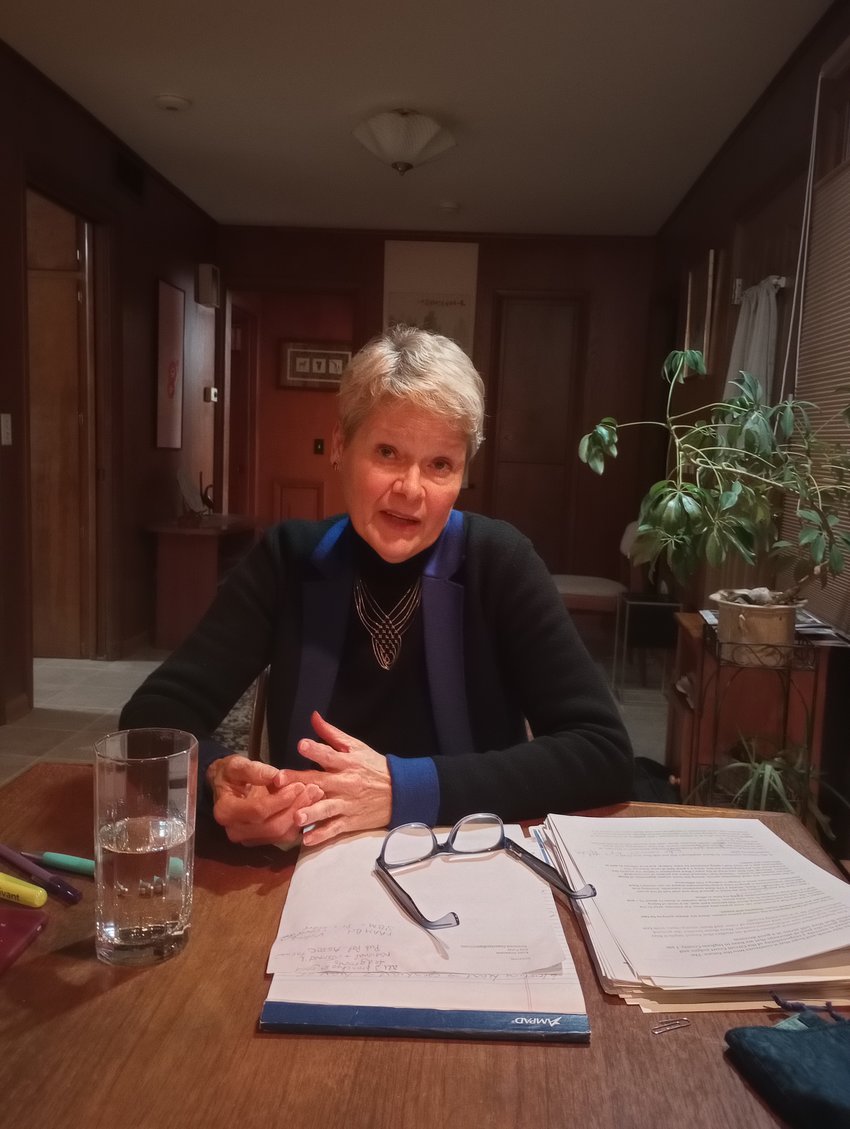 Carol Siemon told voters in Ingham County in 2016 that she wanted to bring a new way of seeking justice through prosecution. They rewarded her with a four-year term as Ingham County prosecutor, and in doing so made her the first woman elected to the post. She was reelected in 2020.

But halfway through the second term, Siemon,66, is retiring, effective Dec. 30, ending a combined 17 years working in the Prosecutor’s Office. In a sit-down interview with City Pulse over the holiday weekend, she explained that her decision to retire early was based on many factors, including her age and having the resources from vested pensions for years in various government positions.

She also cited two years of personal trauma, including the deaths of her brother and friends as well as the trauma of dealing with crime and survivors.

Most important in her timing, however, was the belief that the office was stable and could navigate her retirement.

She took the helm after a tumultuous few years. Former Ingham County Prosecutor Stuart Dunnings III left the office in disgrace, caught up in a scandal involving sex workers. Current Gov. Gretchen Whitmer was tapped as an interim prosecutor in 2016 and served six months to complete his term.

“Transitions are hard enough as it is,” she said. “I wanted to make this one go as smoothly as possible.”

What her life in retirement will look like is uncertain, other than she would like to spend more time traveling and visiting friends. She said she will remain active in social justice work in the community.

That began with working with the assistant prosecutors in her office and helping to reframe the conversations that happen in what is known as “case review.” Assistants present their cases, and decisions are made on what charges should be issued. Siemon said those meetings generally evaluated only the instant case in front of the prosecutor, but didn’t take into account other factors that can influence crime.

“We started having more nuanced conversations,” she said. “It wasn’t just a ‘let’s charge this.’”

Siemon said at first those conversations were stilted and uncomfortable. But as the staff in the department came to understand what she was doing and how she was getting there, it became easier.

“They weren’t walking around terrified that if they made a mistake they were going to be fired,” she said. “I believe when you make a mistake, you correct it, you own it, and you don’t do it again. I wanted that there for the staff.” While her relationship with the prosecutorial staff improved, she ran headlong into resistance from law enforcement as she attempted to implement changes to address racial inequities in the justice system.

She faced backlash from local law enforcement over her decision to strictly limit issuing charges for people who committed crimes with a gun. Michigan makes it an additional felony to be in possession of a firearm during the commission of a  crime. A person convicted under that law faced a minimum of two years in prison, on top of their other sentences.

Data from Ingham County found that 80 percent of the people charged with the add-on two-year felony were Black. And Siemon labeled it “overtly racist” at the time.

But Ingham County Sheriff Scott Wrigglesworth and 22 other officials across the county, including Mayor Andy Schor, criticized Siemon for the policy and asked her to “reconsider it.”

Siemon said it was “bullying.” She said Wrigglesworth could have come to her with his concerns first. “They can be frustrated. They can express their disapproval with my policies. But there are more effective ways to do it.”

She said that despite the 1-year-old policy, there are still racial disparities in relation to various crime charges, such as the discovery of drugs or weapons as the result of a traffic stop, which she also clamped down on. “It’s not really clear why that is. We need to dig into it a bit deeper.”

Addressing racial inequity was something she regularly used the office for.

“I try to share information with them, and vice versa,” she said. “I share with them studies. But, frankly, they tell me, ‘I’m not going to read that.’”

“They kept saying they were going to rely on their experiences,” said Siemon. “But you can’t rely on the experiences as data that got us into this problem in the first place. Because we know we all have implicit biases that helped inform that experience.”

Ingham County Circuit Judge Rosemarie Aquilina was a frequent critic of Siemon’s plea bargains. She made headlines this month for calling for Siemon to resign.

Conflict with law enforcement is not new territory for progressive prosecutors across the country. But Siemon did find herself facing a catastrophic public health crisis that no one planned for: COVID-19.

“We still don’t know all the systems that were broken during the pandemic,” she said. “We have a pretty good understanding of the virus and the health impacts, but not on the systems. I don’t know if we ever will. What COVID did was take fractured areas in society and fracture them even more.”

But it hasn’t been all front-facing conflict for Siemon.

She walked into office just weeks before Donald Trump was sworn in as president. His anti-immigrant rhetoric on the campaign trail had raised fears in the immigrant community on multiple levels.

“We are a hub city for immigrants coming to this country,” she said. “But we needed to put in place systems to make sure that any immigrant who was a victim or was in court for another reason, was not going to get grabbed up by ICE or other law enforcement. It was a really worrying time.”

Behind the scenes she has worked to address tracking of hate crimes, including those related to the LGBTQ community. Michigan’s hate crime law does not cover crime motivated against a person based on gender identity or sexual orientation. An early-on experience in the office led her to implement a preferred pronoun option for survivors of crime. A young transgender woman was misgendered by law enforcement, and then again by the Prosecutor’s Office when it called her for a preliminary hearing. The woman never showed up for court and the accused had the charges dropped.

“That was a really unfortunate situation that could have been prevented,” she said.

She pointed out her connection with Advance Peace, noting violence interruption was an important tool. All of the Advance Peace locations were similar in demographics to Lansing. But like many of the policy ideas she wanted to move forward, it required moving pieces into place for the next prosecutor to build on.

“I won’t get to see those implemented, but I am excited to see what I think will be really good results,” she said.

Under her tenure, the Prosecutor’s Office got grant dollars from the Department of Justice and the office of Michigan Attorney General Dana Nessel to fund DNA testing on rape kits. That, she said, has led to convictions of old rapes.

“It also showed us that some people who sexually assault do it again,” she said. “Just like they found in Detroit, and across the nation, we were finding cases linked by DNA.”

She said the grant funding also paid for investigators to spend time with victims from years before, encouraging them to pursue criminal prosecution.