What wage is the right wage? 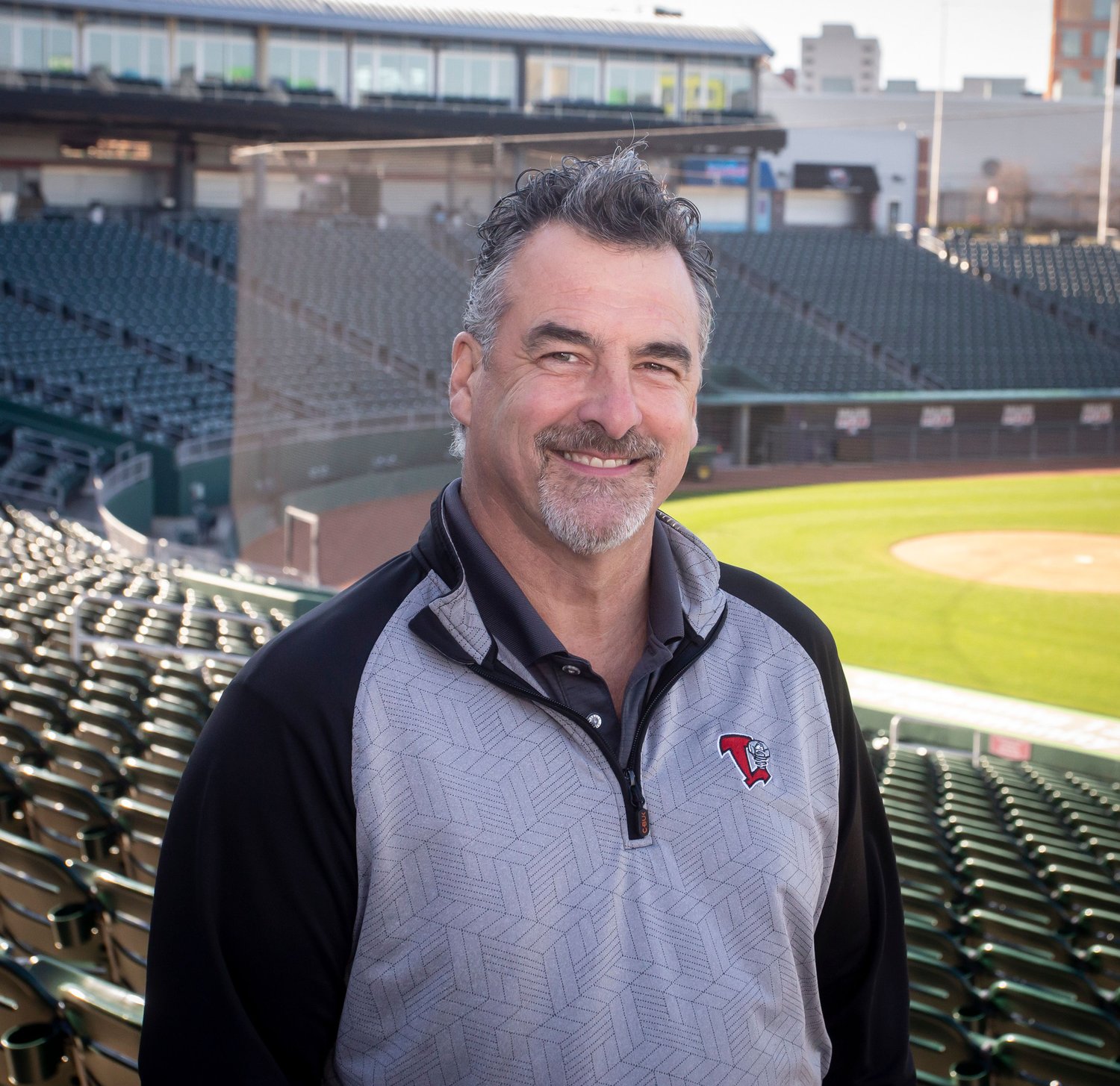 Lansing Lugnuts executive Greg Kigar says the team moved its job fair to the Lansing Center this year because it was a crush of people for concession and ticketing jobs. Fewer than 20 showed up.
Roxanne Frith for City Pulse 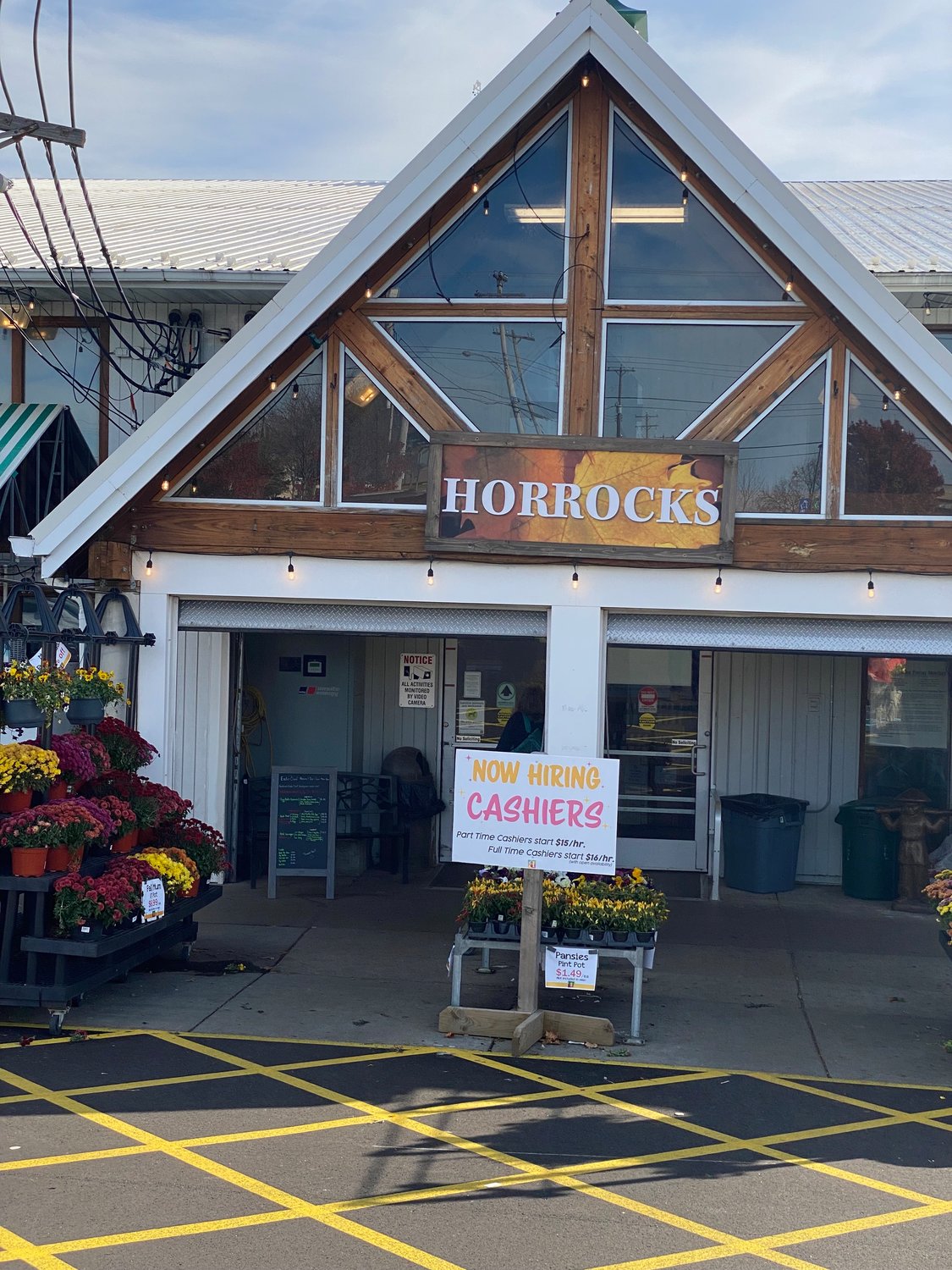 The coronavirus pandemic landed at the perfectly wrong time for Greg Kigar, who started working with the Lansing Lugnuts in early March 2020. He went around the office introducing himself for less than two weeks — and the rest of his colleagues he had to meet on Zoom.

For the last two and a half years, he’s been helping Lansing’s minor league baseball team navigate the stormy seas of a pandemic, balancing operations and COVID safety. But as the pandemic fades, Kigar, a Lugnuts assistant general manager, is now left dealing with probably the pandemic’s most famous economic snarl: a tight labor market that has rewarded workers but pinched employers and has helped drive inflation.

The team relies on a crew of workers for concessions, ticketing and everything in between — but they’ve been tremendously hard to find this year. Post-game cleanup crews are notably difficult to put together, he said.

“We hired a temporary company to come and help. And then they were having issues and they quit showing up,” Kigar said, noting that he’s found himself personally in the stands cleaning up after games more so than any other season in his career.

It raises a thorny question — what wage is the right wage? Right now, a lot of the basic jobs around the ballpark pay about $10 an hour. Would $12 fix those problems, Kigar wonders? What about $14, or even $16 or $18? There are no easy answers.

“At the end of the day, we’re working on budgets,” Kigar said, “and it’s like, OK, I’ve got to clean up after 66 games, and how much out of my total budget is there gonna cost just for that, let alone to staff a game?”

“We used to basically open up the ballpark to do our job fair,” he said. “And then last year, we moved it over to the Lansing center thinking we’d have this huge mob wanting to come back to work. And I think we had 16 or 18 people show up.”

In Lansing, around Michigan and beyond, businesses and workers have had to adapt into and out of the nigh-unthinkable height of the pandemic. But what’s been left behind is high inflation, rising interest rates and a growing sense that a recession might make things worse before they get better.

It’s not clear what comes next,  and it’s not perfectly clear how we got here, either. There are theories, though, spanning sudden pandemic retirements to supply chain snarls to the war in Ukraine — all tugging at the delicate balance of supply and demand.

Bob Tresize is the president and CEO of the Lansing Economic Area Partnership, or LEAP. He points out that, as the pandemic worsened, baby boomers left the American workforce.

“Purely from a demographic perspective, a huge amount of people left, and a small amount of people entered,” Trezise said. “And they entered under very, very difficult virtual circumstances into the workforce. All overnight.”

Trezise also argues that immigration policy hasn’t helped. He traces a tight labor market through strict immigration policies under President Donald Trump, which he said cracked down not only on illegal arrivals, but on legal migration, too — moves that have crimped the labor supply precisely when it needs more workers.

Nowadays,  the compound effects of a pandemic crunch and more are all around. 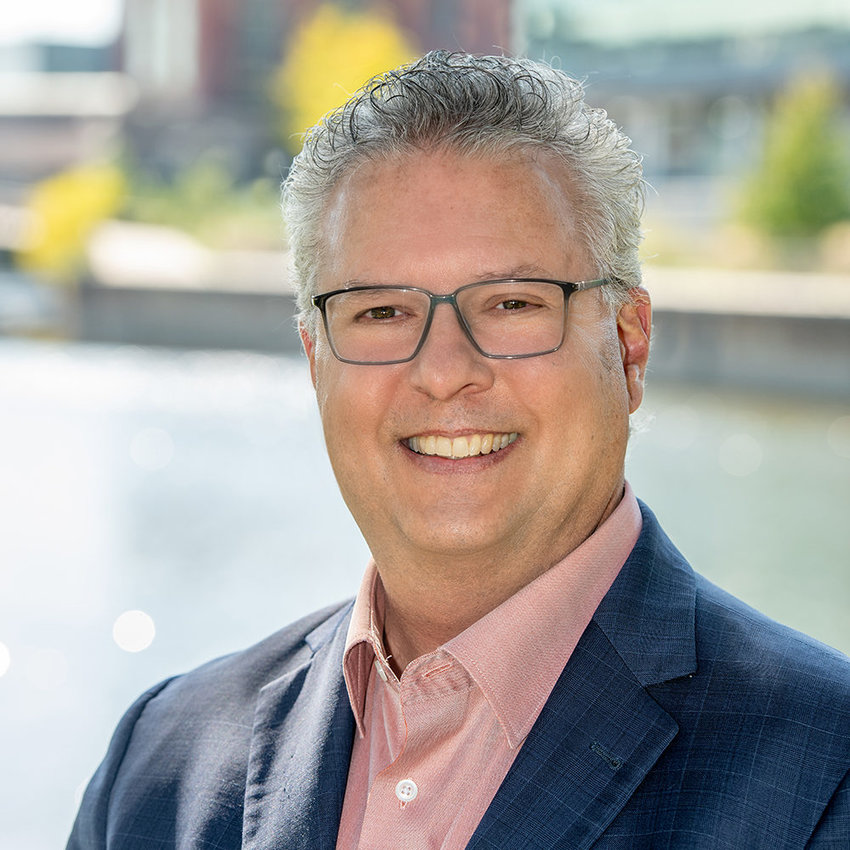 “You can see it in healthcare systems massively struggling to hire nurses,” Trezise said. “You certainly see it in the schools, (with) incredible difficulty hiring teachers. You see it with the local municipalities not being able to hire police.”

Kathy Holcomb is the owner of Absolute Gallery in Old Town. She said it’s not hard to find applicants for jobs — but it has been hard to find qualified ones.

“Just any warm body isn’t going to be a fit for small business,” she said. “You have to do a lot of everything versus just one thing — everything from sweep the floors on up.”

Inflation has been extraordinary, Holcomb said. One customer saw the price of the same frame quadruple between September 2019 and the spring of this year, she said.

That’s no surprise to anyone following the numbers. According to the Bureau of Labor Statistics, inflation burned at a scorching 8.2% over the 12 months prior to its October update. That’s a tough test for businesses already grappling with a tight labor market. 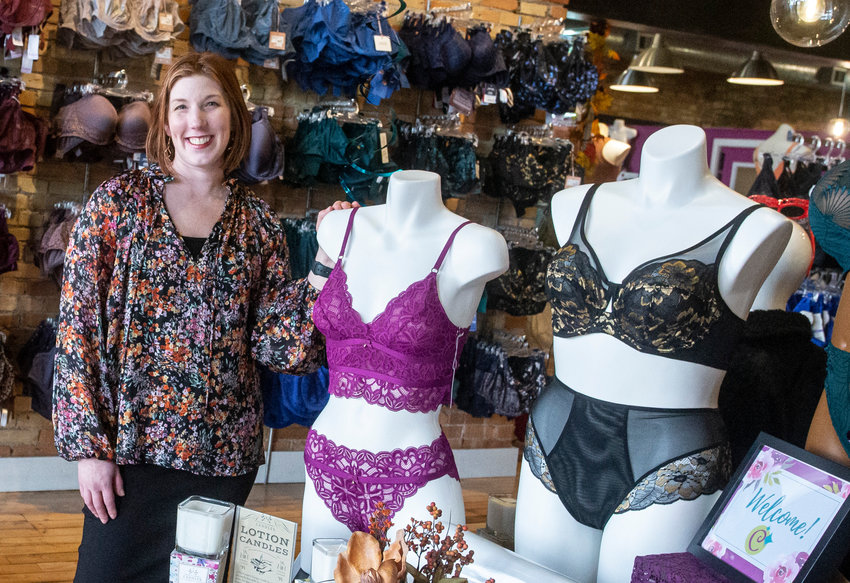 Lauren Palmer, owner of Curvaceous Lingerie, is not overly concerned about the economy. People will always need bras, she said.

It’s not all bad news, though. Curvaceous Lingerie owner Lauren Palmer said she more than doubled the size of her business when she moved it into the 100 block of Cesar E. Chavez Avenue in Old Town this year.

“Our number one business is bras and bra fitting, which is a pretty necessary commodity,” she said. “People still need those things. Like underwear, right? People still need them and are going to buy them whether we’re in a recession or not.”

Palmer is still seeing plenty of applicants for jobs, she said — enough that she isn’t concerned about staffing.

“We’re adjusting to being much larger, which is great. But being larger comes with more expenses and whatnot, too. So it’s just finding the right balance,” she said. “Regarding inflation itself, I mean yeah, our costs have gone up. We just did our first voluntary price increase across the board this past month, which helps kind of offset some of the shipping costs that have been increasing, things like that.”

Is she nervous about the future? About where inflation and rising interest rates could lead?

“It’s kind of in the back of my mind, I guess,” she said. “But at this point, I’m not making a lot of business decisions thinking that we are going to be going into a recession. Everything is pretty much standard, run-of-the-mill … at this point.”

Justin Walworth is chief human resource officer for Peckham, a vocational rehabilitation group that connects people like refugees, disabled persons and veterans to jobs. Those can be humble positions, but they were often critical during the pandemic.

“When the pandemic hit, Peckham was deemed an essential employer right off the bat,” he said, pointing out Peckham’s custodial workers. “It feels like there are probably fewer people applying than there were several years ago, some of that could also be that we are also expanding some of our areas. So we’ve got continued growth that we’re working on.”

It’s hard to say what comes next — but there’s a broad sense of what might happen.

“I think employees have over the last couple of years been placed in a position of a little bit greater leverage over the employers,” said Tim Daman, president and CEO of the Lansing Regional Chamber of Commerce. “And I think as you continue to kind of maybe see the economy slow, if it does slow down, some of those things there will potentially flip that leverage back to the employers.”

Daman also pointed out that, whatever does come next, Lansing’s extremely broad base of public-sector employees helps provide a recession-resistant ballast should the economy sail into stormy seas.

“Historically, our employment base of state government and higher education — Michigan State University, Lansing Community College —  those positions have helped our region, I think, weather and make it through economic downturns in the past better than other regions,” Daman said.

Michigan State University deputy spokesperson Dan Olsen said in an emailed statement that the school is “not immune to some of the hiring challenges being experienced across the state and country.” Olsen said MSU has worked toward “more robust” remote work policy and is “working on a caregiver program that better supports employee and family needs.”

And although there’s a lack of clarity on what comes next — and even a lack of options in Lansing — there’s at least one way the region can move forward, Trezise said. That’s with more people in Lansing, growing the economy and filling jobs and making it a more vibrant place to live.

Trezise is bullish on the outlook. Wages, Trezise argued, are still competitive. Housing has remained more affordable than other places (though federal statistics still show a sharp increase; in Ingham County, one cost index rose 14.22% from 2019 to 2021, while in Wayne County it’s increased more than 15%. In both Kent and Grand Traverse counties, those numbers are at nearly 19%). Companies, he said, are drawn to a “Goldilocks” community — “not too big and not too small.”

“And that will be the secret sauce to us solving the lack of employees,” Trezise said.

“It’s a complicated situation, but I believe the Lansing economy will weather any downturn and be poised to spring back when costs and interest rates drop back down sometime next year or in early 2024,” said Karl Dorshimer, the Lansing Economic Development Corp. chief. “I anticipate that once this happens, there will be a surge in economic development in Lansing and we will again head into a growth phase.” 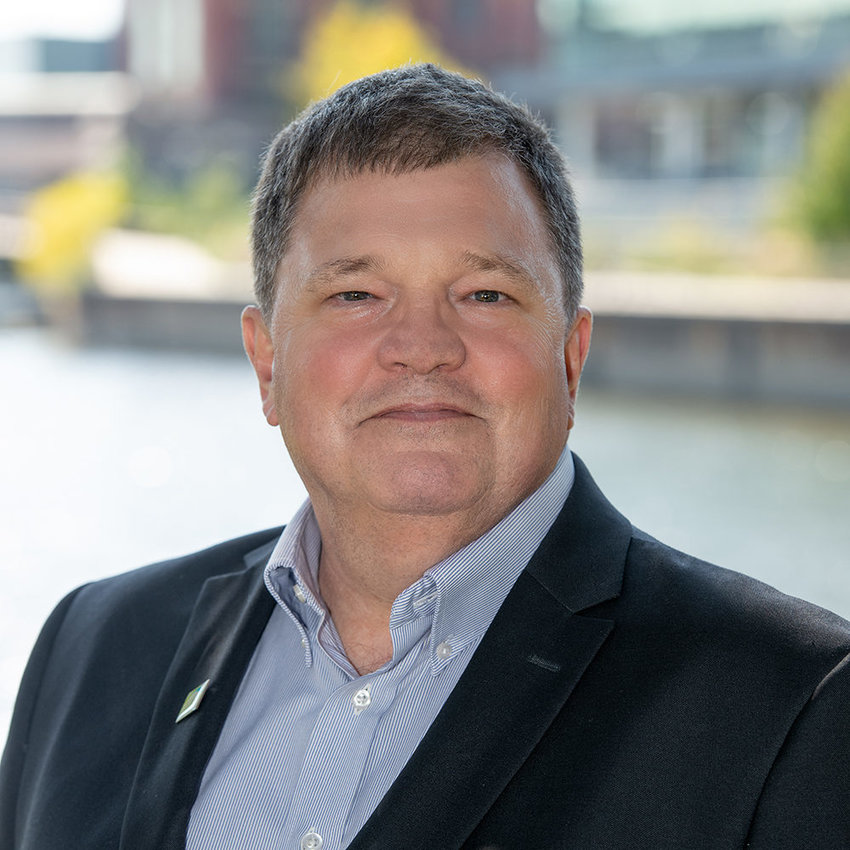 One of the central challenges for the future is downtown Lansing. Mayor Andy Schor is as optimistic as Trezise, ticking through a list of big projects and new developments. But he also noted that the “future of work” poses a question for the city’s future — one in which state employees, once the lifeblood of the city center, have been increasingly displaced by the pandemic and are now pivoting increasingly to remote work.

“It’s a challenge for our economy. But it’s changing, and we’re changing with it,” he said. The ultimate goal is a daytime office activity, plus downtown housing that can boost the number of people shopping and finding a meal.

This is what a lot of city leaders mean when they talk about the vibrancy of downtown Lansing — one of the keys to the city’s future they hope will make it more attractive to employers and developers and, ultimately, new residents.

“So for us, the future of work includes people working from home, trying to get those state employees back in person,” Schor said. “But if they’re not, attracting them to live in our downtown and shop and eat and other things. and really transform our downtown into a walkable community day and night.” 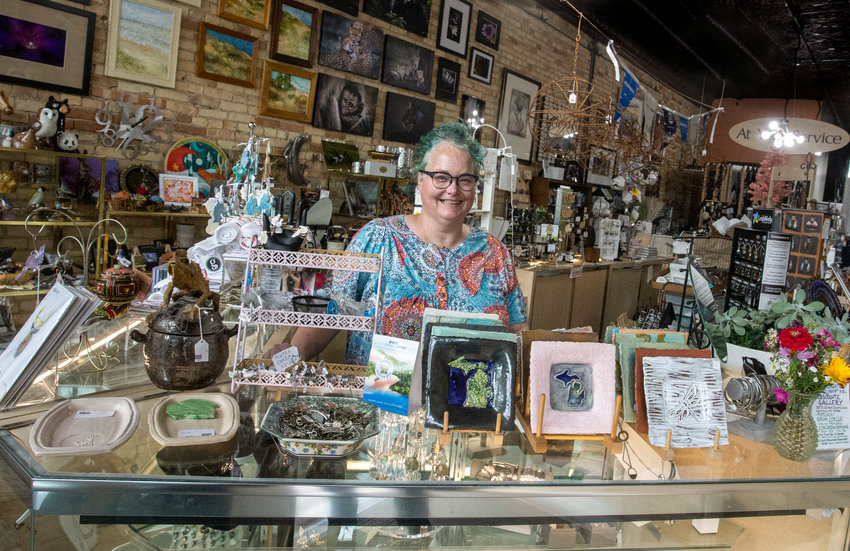 It’s impossible to know what happens next, but whatever comes to pass,  Lansing is bracing for it. Holcomb opened Absolute Gallery in 2003. Since then, it’s been through all the ups and downs of small business: inflation, recession, and now, a pandemic. She said she’s optimistic — ready to put her shoulder to the wheel and, once again, make her business thrive.

“I know I’ve done it before, and I could do it again,” she said. “One of the things I came into business knowing is that there’s always going to be ebbs and flows. You can’t let it get you down — you just have to regroup and do what you can do at the time to get through.”