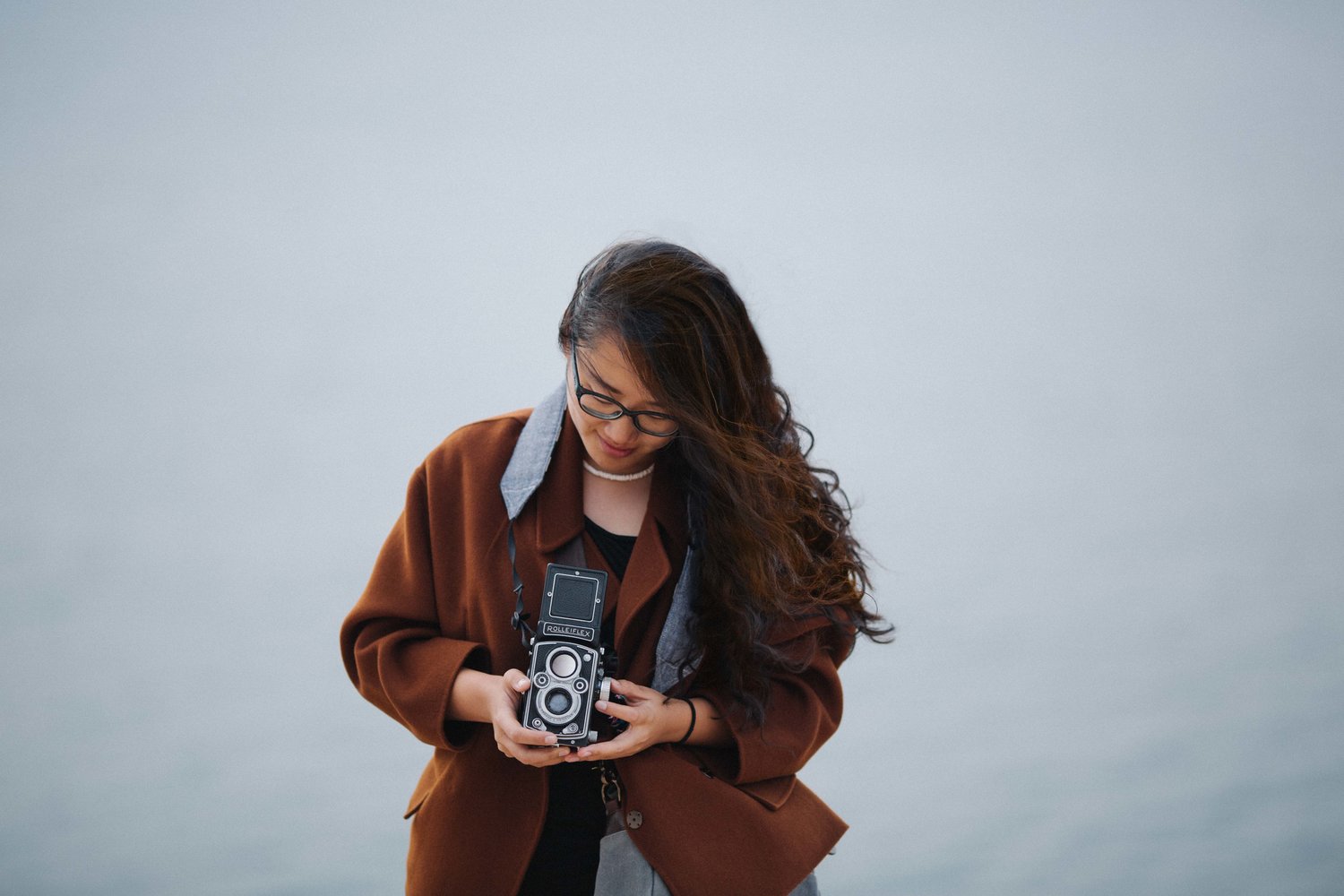 What makes Xiaoxing (Adele) Han a Lansing Legend is her deep ties to the local filmmaker community. Xiaoxing didn’t study film or own a camera until her early 20s. (She has sidestepped questions bout her exact age.) This year, Xiaoxing was crowned Outstanding Filmmaker at the Beijing Winter Olympics Filmmaker Awards and has a documentary screening at the Capital City Film Festival about a Chinese organ player.

How long have you lived in Lansing?

Where do you work?

In 2014, I started working for Michigan State University as the communications manager and a short documentary filmmaker for a cyber research group on campus. I started my own video production company right after that.

What did you study in college?

I got my undergraduate degree at Macau University and my master’s degree from MSU. I was an advertising major for both degrees.

What is your role in Walking in Love productions?

I started the interactive documentary project called Walking in Love (walkinginlovestory.com) in 2014. At that time, I had a stable full-time job at MSU, but I felt like could use my video production skills to contribute more to the world. Then I visited my hometown, Ningbo, China, in 2014. I tried to find something interesting to film, but I had no luck. The day before I left for the U.S., I visited my grandma. She pulled out 20 pairs of her handmade shoes and they were all my size. My mom told me that my grandma had been making shoes for me every single day that I wasn’t in China. I decided to start this project that collects and shares stories of how regular people all around the world express love to their family members, friends, and strangers in their own unique ways. The first story was my grandma’s story. Since then, I have done exhibitions, documentary screenings and story sharing events in different countries, and it has been an amazing journey.

How did you learn about good filmmaking?

I feel video production and filmmaking is all about keeping doing it, and of course watching and studying lots of good films and videos. Always trying to challenge myself and do something new is important too. I have to mention that I learned a lot from collaborating with those amazing Lansing local filmmakers, sometimes just watching how they do things helps me grow a lot too.

What is your favorite Lansing business that is no longer around?

The coffee shop near NCG called Chapelure. I know there is still one in East Lansing, but that one was my favorite. It was not too crowded and the interior design there was cool too. They had amazing cakes! We had a lot of brainstorming meetings there, and many new film ideas were developed there.

Where do you feel the most at home?

Michigan State University and CCFF because of the people there.

When did you get your first camera?

I was a sophomore at Macau. I had my first photography course that year, so I used my scholarship money to buy my first camera.

What was the first video you ever made?

It was a documentary video about a Detroit volunteer trip.

Have you ever shot a movie in Lansing?

Yes. Most of the shorts in the Walking in Love project were shot in the Lansing area; there are a lot of amazing people from all around the world with great stories living in Lansing. I also shot a film with Casey Cavanaugh in Lansing called “Peripheral,” which won the first place of Capital City Film Festival fortnight competition in 2017.

How did you get involved with the Lansing Media Center/CCFF?

I was a volunteer at CCFF when I was a student. The documentary shorts from Walking In Love got selected by CCFF three years in a row. I became a judge and the member of the selection committee since 2018. I was also the photographer for CCFF for two years.

The clip in the trailer of the young girl watching TV, who is the girl and was that sourced from a personal project?

She is my friend’s daughter, who really enjoyed acting. If I remember correctly, this was her first time in a film.

Where are you living right now? What do you like/dislike about it?

In my hometown Ningbo, China. I love both Ningbo and Michigan, they are cool in different ways. What I like about Ningbo is that it is full of opportunities to try new things. For example, I shot a music video for the Maonan minority, won the Beijing Winter Olympic filmmaker awards and I’m going to have my first photo exhibition in a very cool art gallery soon. However, I really miss the peacefulness, the people and the snow in Michigan!

Any plans to come back to Lansing?

Why do you love Lansing?

Lansing is where I started pursuing my dream of being a filmmaker. Many people here have helped me grow and encouraged me to make good art. I also like how people from different countries are living here. The Lansing environment embraces and appreciates culture. The atmosphere of filmmaking here is so good, local filmmakers always gather just for the sake of making something cool.

“Expression” is absolutely gorgeous, what about this project was a first for you?

It was about a story in a mental health hospital in Ningbo. The most important thing for me while making this film was being sincere. Society holds a lot of stereotypical opinions towards mentally handicapped people, and I really hope this film can show the truth — that these patients are lovely and creative.

Do you ever get intimidated by technology as a filmmaker? Why/why not?

I used to be, but then I realized, cameras are just cameras. It is the eyes, brains and hearts behind them that are more important.

A historical fishing boat factory in Ningbo was about to be demolished to make way for a modern theater. Right before the building was torn down my hip hop teacher and I went there to shoot a short video as a way to memorialize this amazing place.

I feel different forms of art are connected to each other. For example, I learned scratching a couple years ago, and it helps me understand lights and shadows in photography and films more. In the similar way, Hip hop taught me how to feel and express music and rhythm.

What is the last good film you’ve seen?

What personal accomplishment are you most proud of?

I think the most rewarding thing I have ever experienced as a filmmaker is that my film helped someone or inspired someone, even if it is just one person in the audience. I remember when I did the first Walking In Love event in China, one girl stood up and said “Your film made me realize, I do not need to be rich to love someone.” When I heard that, I think all the editing nights, when I need to drink a lot of Cokes to keep awake, finally paid off.