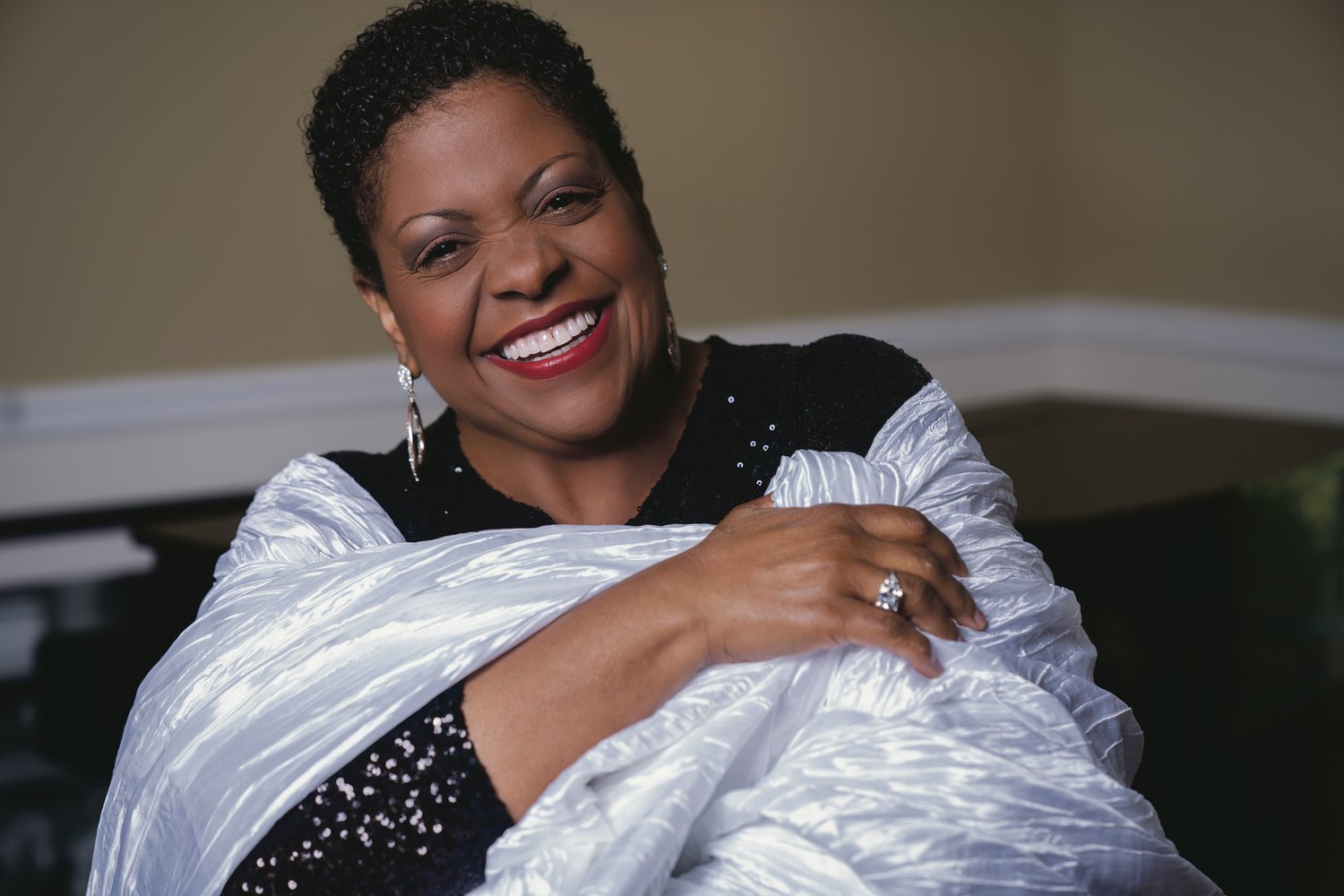 Jazz vocalist Carmen Bradford can whisper, soar, groove and thunder her way into your soul. She makes it look easy, but it’s not.

“It’s a challenge to sing every night, to leave your heart on the stage every night,” she said.

Bradford, the first of this season’s MSUFCU Artists-in-Residence, has a lot of wisdom and many stories to share. She sang for nine years with the Count Basie Orchestra and has worked with everyone from Tony Bennett and Frank Sinatra to James Brown and Stevie Wonder.

She comes to MSU this week for a round of classes, tours of area high schools and a celebratory, Basie-style big band bash Friday at MSU’s Fairchild Theatre.

The student orchestras will have a rare chance to play behind a great jazz singer in the lineage of Ella Fitzgerald and Sarah Vaughan, playing the same arrangements Bradford and the Basie band play.

“Just so we swing really hard and the kids enjoy themselves, that’s the important thing,” Bradford said. “I want them to walk away with an attitude of, ‘I can do this. I do not have to live with my parents after I graduate. They can do something else with my room.’”

Bradford, who directs the Jazz Voice Department at the San Francisco Conservatory of Music, also has a message for the powers that be at the MSU College of Music.

MSU’s vocal jazz department was eliminated in 2011, along with the music therapy program, as part of a university-wide 20 percent slash of programs.

“That’s heartbreaking,” Bradford said. “Oh, gracious. Every jazz program should have a vocal jazz department. How do you not have the first instrument? I mean, really?”

No one has ever accused Bradford, 62, of excessive shyness. In 1982, two years before Count Basie died, she was a sophomore at Huston-Tillotson University in Austin, Texas, when she was tapped as the opening act for Basie’s touring band.

Early the night of the show, she spotted Basie, who was riding a scooter at the time, at the other end of the stage. She walked over to him, introduced herself and told him that if he hired her, he’d make “a million dollars.”

Basie lingered, at Bradford’s behest, and listened as she sang the old standard “A Foggy Day” and Kurt Weill’s mysterious masterpiece, “Lost in the Stars.”

When she was done, she walked over to him.

“What did you think?”

She told him she was ready to quit school, pack and leave that night.

A long nine months later, Williams was getting into her car to go to an R&B gig in Santa Fe when one of her housemates called her back and told her there was “some old man on the phone.”

She assumed it was her grandfather, Melvin Moore, a big band singer who recorded with Lucky Millender and Dizzy Gillespie back in the day and had a hit single, “Love Me, Pretty Baby.”

“This is Count Basie,” the “old man” said. “Are you the little girl who wants to work with me?”

Bradford thought it was a prank from his cousin Otis and hung up. She barely returned to the car when her roommate popped back out.

This time, she apologized to Basie.

“I thought you were my cousin Otis.”

“No, this is not Otis,” he snapped back. “Now, do you want to work for me, or do I call another little girl?”

“We will see you on Friday in Boston.” (It was a Wednesday.) “Pack all your big band arrangements.”

“I don’t have any big band arrangements. I sing rock and roll.”

“I wear Levi’s and cowboy boots on stage.”

“Just put a little rope around your suitcase, and we’ll see you on Friday.”

She expected to see the world-renowned Basie band pull up to the hotel in a line of limos.

“I saw this funky, smoking Greyhound bus pull up,” she recalled. “All these Black men got off and I said, ‘It’s them!’”

Bradford sat up front on the bus with Basie for her first touring year.

“We got to be so close,” she said. “I just adored him, and he spoiled me rotten.”

She caught some flak at first for “hollering all over the place” from band member Freddie Green.

“This is not some Aretha Franklin show,” he told her.

Basie laid back and quietly let her figure out the arrangements.

It didn’t take long. Although Bradford loved R&B singers like Chaka Khan and Gladys Knight as a teenager, she also got a jazz education on Saturdays from her mother, vocalist-composer-author Melba Joyce.

“While doing the chores, she’d put on records by Nancy Wilson, Sarah Vaughan, Frank Sinatra and Tony Bennett, Carmen McCrae,” she said. “I had it all memorized without knowing it.” When the chores were done, she’d turn the knob to the R&B station and listen to Stevie Wonder, James Brown, Franklin and so on.

She ended up working with all of these legends throughout her career.

Bradford had another life-changing moment shortly after Ella Fitzgerald died in 1996 when she got a call from jazz vocalist Carmen Lundy.

Fitzgerald’s house on Whittier Drive in Beverly Hills wasn’t far. When Bradford arrived, she found Lundy among a crowd of unfamiliar people sorting out the estate. Lundy urgently whisked Bradford upstairs to Fitzgerald’s bedroom and pointed to the bedside table.

Bradford was shocked to see the jewel case from her 1995 CD, “With Respect,” lying on the table. The CD has a spirited rendition of one of Fitzgerald’s signature songs, going back to 1936, “You’ll Just Have to Swing It (Mr. Paganini).”

“It was still inside the player, and it was the only CD on her bedside table,” Bradford said.

The experience helped her shake off an uncertain time in her career. She resolved to stay in the business and keep the creative flame going.

“It changed my life because this business is hard, and I was burned out,” she said.

Bradford finds that today’s students could benefit from a longer perspective on the ups and downs of a musical life.

“They’re so obsessed with runs and riffs and making it perfect, they are truly missing and not understanding the importance of the actual phrasing and performance and the bigger picture of it,” she said. “What is the real deal? Who are you? How do you live? It’s not just about you being on stage. I take out the trash like everybody else. You have to have other things going on in your life, with your family, whomever you love, whatever you enjoy doing.”

From the motorcycle to the stage