Thinking Outside The Boobs and The Son Also Plagiarizes 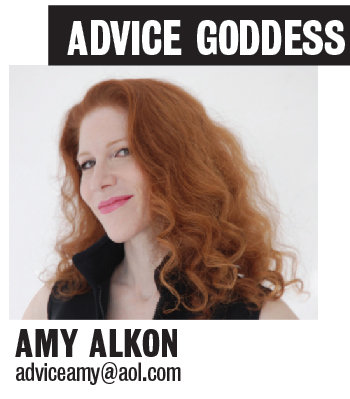 WEDNESDAY, Sept. 21 — Q: I’m a man who likes to girl-watch. I do this from behind very dark glasses, yet I still elicit scowls from women. Recently, I was at a help desk, and I availed myself of the view down the receptionist’s top. She quickly covered up with a scarf. I’m puzzled, because there's no way she could’ve seen my eyes. What’s going on here? —SunglassesA: We all appreciate a nice view, but your eyes might be lingering a bit long in the wrong places if you hear stuff like “Sir…are you ready for my areolas to take your order?”Hiding your boob recon behind pitch-dark shades doesn’t help matters — but not because we have some magical ability to know when someone is staring at us. Sure, people will swear that they can tell — even if the starer is behind them or is behind dark glasses. However, unless they grew up someplace else — like on Planet 34 — they have no organ that would detect this. (Here on Earth, “eyes in the back of your head” is just a figure of speech -- save for any rare genetic accidents.) Why might we think we know when we’re being watched — even by someone we can’t see? Well, we may — subconsciously — be picking up on subtle reactions of people around us who can see the watcher. Neuroscientist Joseph LeDoux explains that our amygdala — part of our brain’s threat detection circuitry — reacts beneath conscious awareness, messaging our body to get ready to run or rumble (that “fight or flight” thing). Among our body’s responses, our little hairs stand on end. That’s a creepy feeling — leading us to whirl around to see what gives — and whoa!…there’s some dude angling to cavity-search us with his eyeballs.We have a term for that “hairs standing on end” feeling, and it’s “being creeped out” — which is what women are experiencing when they can’t see what your eyes are up to behind those dark glasses. Evolutionary social psychologist Frank McAndrew published the first study on the nature of “creepiness.” He explains that the feeling that something is “creepy” is a self-protective response to “ambiguity” — our being unsure of whether we’re facing a threat. We err on the side of assuming that we are — and in rushes the palace guard to barricade the cleavage with a scarf.This woman you stared at was at the “help” desk, and no, that isn’t short for “Help yourself to a nice long look down my boobage.” Close-range staring at a captive audience like that is particularly creepy — as in, it’s rude. Again, the sunglasses don’t change that; they make it worse. If you’re going to girl-watch, do it in wide-open spaces, like on the street or in a mall, so you don’t make women feel like sitting ducks in pushup bras. You might also take off those spy glasses and engage with one of these ladies. If you get something going with a woman, gazing admiringly at her will seem like a form of flattery — as opposed to a sign that your mom reset the Net Nanny to block all those “filthy” webcam sites.Q: I met this woman who’d dated my ex. In talking, we realized that he used the same romantic lines on both of us. Granted, these made me feel good at the time, but I feel angry and stupid for falling for them. How do you know when a guy is sincere?—ScammedA: Understandably, you want a man’s lovey-dovey talk to come from the heart, not from a Word doc he saved on his hard drive. However, a guy whose heartfelt remarks turn out to be a renewable resource isn’t necessarily some sneaky recycler. Consider how personality plays into this. Personality is a pattern over time of thoughts, feelings, and desires that shape how you behave. Research by social psychologist Nathan W. Hudson suggests that you may be able to change aspects of your personality through behavioral change — like by repeatedly acting more conscientiously. Still, Hudson — along with about 10 truckloads of other social psychologists — sees a good deal of evidence that personality is “relatively stable.” In other words, even a sweet, sincere guy is likely to use some of the same romantic wordery with any woman he’s dating. What tells you whether he’s a good guy or he just talks a good game is time — reserving judgment on what you have together until enough time passes for you to hold up the sweet things he says to what he actually does. Wanting to see any discrepancies is really the best way to protect yourself from serial romancers — or worse. (“I bet you say that to all the girls you put in your freezer!”)(c)2016, Amy Alkon, all rights reserved. Got a problem? Write Amy Alkon, 171 Pier Ave, #280, Santa Monica, CA 90405, or e-mail AdviceAmy@aol.com (advicegoddess.com). Weekly radio show: blogtalkradio.com/amyalkonOrder Amy Alkon's book, “Good Manners For Nice People Who Sometimes Say F*ck” (St. Martin’s Press, June 3, 2014).