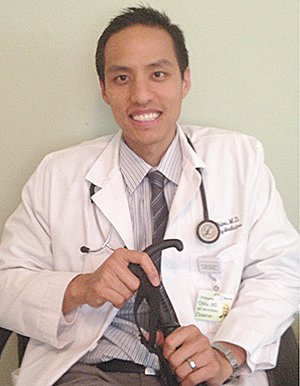 For resources on anti-Asian hate please visit either  stopaapihate.org or anti-asian violenceresources.carrd.co

(Christopher Chiou is a Taiwanese-American family physician in Lansing who works for the Michigan-based healthcare provider BridgeCare and is part of the Committee to Protect Healthcare.)

Hate crimes and pandemics have a way of exposing how we’ve failed our fellow Americans. But if we’re willing to learn, they can also show the path toward healing that can transform us in ways big and small.

I have thought of this more recently with the rise in hate crimes and racism against Asian-Americans, which has accelerated this past year. May was also declared as “Asian American Pacific Islander Month,” further highlighting the importance of this topic.

As a Taiwanese-American, I am horrified and angry — angry that some of my fellow Americans continue to dehumanize me, my children and people who look like me as malevolent aliens; tired of being yelled at on the street to “go back to (insert wrong Asian country here)!”

At the same time, as a family physician, my instinct is to find healing — some treatment we can start with, so we can make something good out of all this sickness of our spirit. Instead of trying to tackle this massive topic in just one piece, I’d like to look at just one small part: affordable, accessible prescription drugs for Asian-Americans, who despite the myths, are not all the same but like all Americans are finding them increasingly unaffordable.

Unequal origins, unequal opportunities, unequal outcomes. Our diversity should end, once and for all, the myth of the “model minority.”

Which brings me to what I see in medicine today. Though Asian-Americans as an aggregate population may be healthier than the general population and share some common data points with the U.S. population, with cancer and heart disease as leading causes of death, the story is very different on the disaggregated level. With 15% of them in poverty, Vietnamese-Americans report to be in poorer health at twice the rate than white and Asian-Americans as a whole. Japanese-Americans report higher rates of obesity. Korean-Americans struggle with diabetes. Filipino-Americans have a greater prevalence of high blood pressure, asthma, heart disease and delayed medication usage compared to Asians overall.

The cost of medications, which affects Asian-Americans as it does all Americans, is a structural challenge that policymakers must reform. Recently, the Michigan Legislature passed proposals to reduce the cost of insulin and oral chemotherapy. This is a good step, but falls short of what must actually be done, which is to reduce the cost of all prescription drugs.

In 2020, prices for 500 prescription drugs went up on average at twice the inflation rate. Too many people are skipping life-saving heart medications only because of cost. For Americans, including Filipino-Americans, who struggle with asthma, their disease management should include a preventive steroid inhaler, the cheapest of which is still $260 a month. While Asian-Americans as whole suffer mental illnesses at comparable rates to the general population, they are three times less likely to get treatment, a situation made worse by the fact that commonly used antidepressants like Fluoxetine went up more than 800 percent in 2019.

Reducing the cost of insulin and oral chemotherapy is a good step. Condemning hate crimes against Asian-Americans, as the Michigan Legislature did recently, are also commendable.

I encourage our policymakers to make greater strides forward, especially in reducing the high cost of prescription medications. Some states are taking a proactive, reasonable approach: Maryland created an independent prescription drug affordability panel that makes drug pricing more transparent and holds drug companies accountable. Michigan should follow and bring relief to all Americans, including Asian-Americans.

Greater equity is one antidote to racism and bigotry. We can start, one step at a time, by making access to healthcare and medications more affordable, for all Americans.