The battle over K-12 education 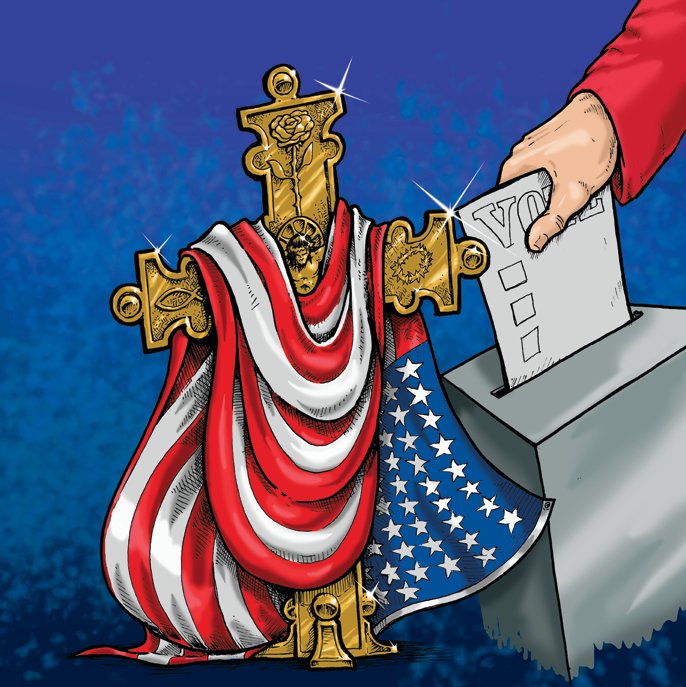 "When fascism comes to America it will be wrapped in a flag and carrying a cross."
ART BY NEVIN SPEERBRECKER 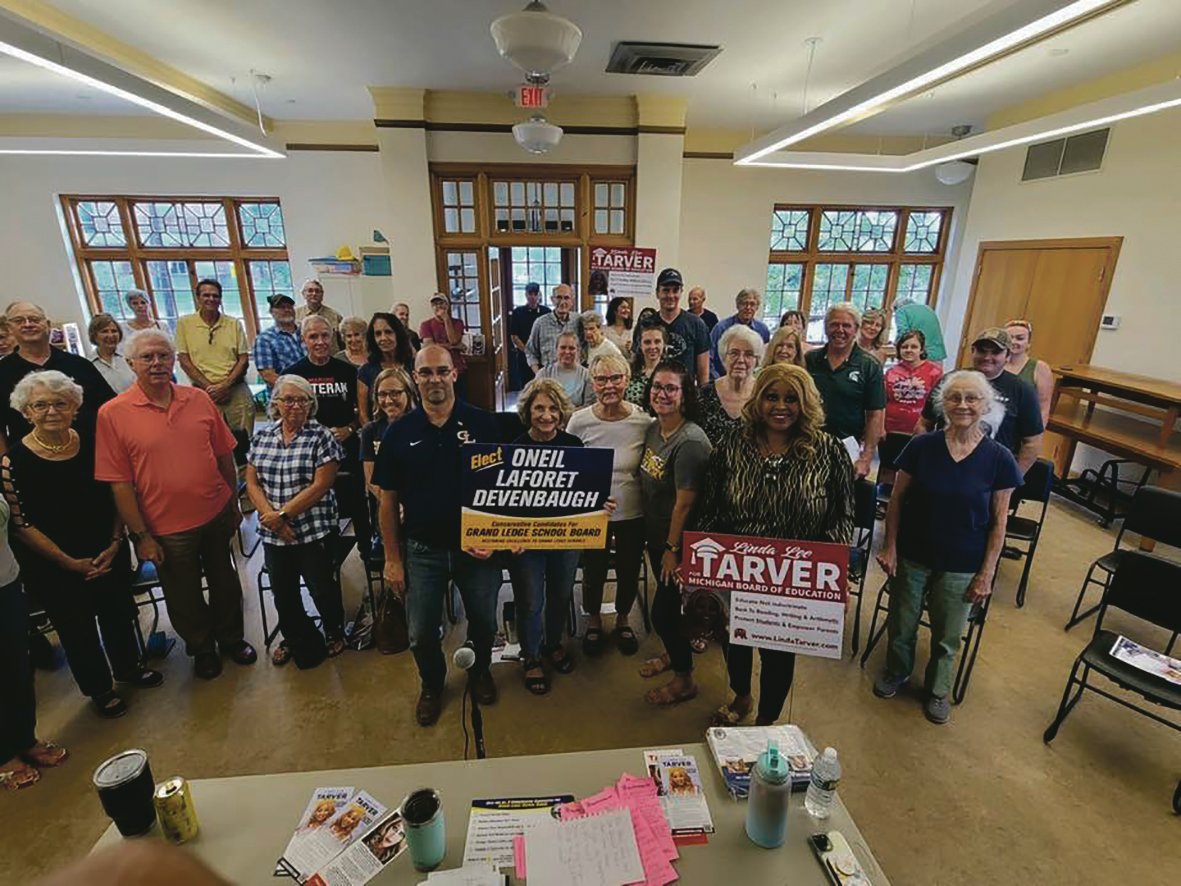 Jason Devenbaugh’s Facebook campaign page Linda Lee Tarver (in the right foreground with her campaign sign) is one of two GOP nominees for the State Board of Education. Here she poses with Kim LaForet, Jason Devenbaugh and Ashley Oneil, three self-described “conservatives” in the nonpartisan Grand Ledge Public Schools Board of Education race. Behind them are attendees of a town hall event held by the conservatives on Sept. 18.
Jason Devenbaugh’s Facebook campaign page
Posted Thursday, September 29, 2022 12:01 am
Todd Heywood

She told a group of politically conservative Grand Ledge residents attending a Sept. 18 forum that she doesn’t believe in systemic racism. Yet she was on the Michigan Civil Rights Commission that voted to approve the report that explicitly tracks the Flint water crisis back nearly a century, showing how redlining and white flight set the city up for the crisis.

The three self-billed conservative school board candidates were Ashley Oneil, Kim LaForet and Jason Devenbaugh. Also running are Ashley Kuykendoll and incumbents Toni Hughes Glasscoe and Denise Dufort. They are vying for three seats: two full, six-year terms and one partial term. And the conservatives have been a lightning rod of controversy in this generally calm community. The district includes eight school buildings and serves nearly 5,000 students from Eaton and Clinton counties.

Those six candidates are part of the swelling ranks of citizens seeking to serve on nonpartisan, unpaid school boards in Ingham and Eaton counties. Ingham County Clerk Barb Byrum said over the years she has served as clerk, she has witnessed more candidates seeking the positions. Historic election data, she said, supports that observation.

Time magazine and The New York Times have both reported that COVID and measures to control it are partially responsible. But COVID measures — masks, social distancing, vaccination — are only part of the fight being waged at local school boards. Activists are fighting to remove books they deem objectionable — often LGBTQ themed — and a supposed inundation of critical race theory teachings and gender transition supports.

To better understand the perspectives of candidates for local school boards, City Pulse sent a survey to all official candidates in select education races in Ingham and Eaton counties. The survey went to 69 school board candidates, of whom 25 responded. Their responses can be found here. 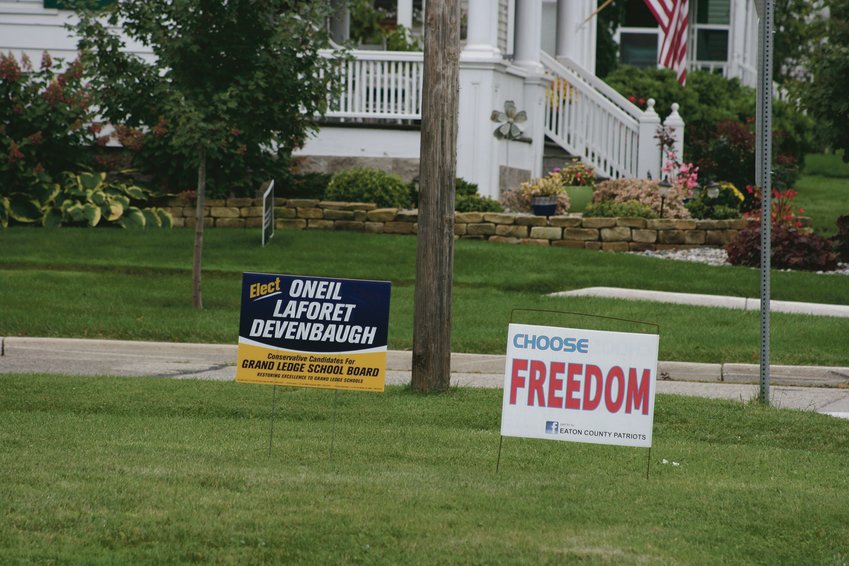 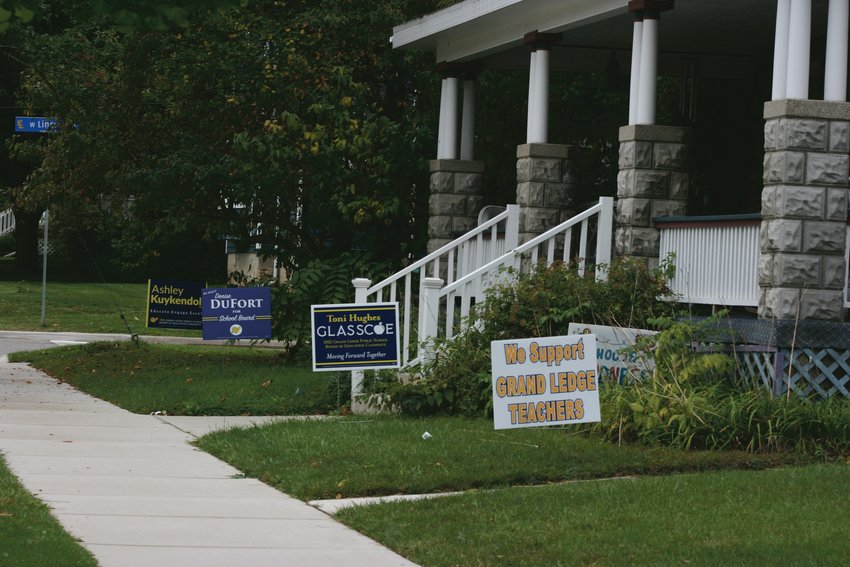 Nowhere in the area has the debate been more front and center than in Grand Ledge. Beginning in January 2021, parents and residents chided, yelled and harassed school board members and officials alleging the district was teaching critical race theory — CRT for short. That’s a college-level academic argument that previous structural inequities created by race continue to influence the economic lives and health of people of color.

A meeting in June 2021 was ended before board members could vote on a contract for Marcus Davenport, the district’s new superintendent, reported the Lansing State Journal. Why? Audience members were raising the roof over CRT and ongoing COVID mitigation measures.

Oneil LaForet and Devenbaugh did not respond to the City Pulse candidate survey, which asked, among other questions, if candidates believed there was a cabal of power elites in Washington engaged in a pedophile ring, if Donald Trump won the 2020 election and whether the candidate supported removing books community members objected to from public school libraries.

(L-R) Denise Dufort and Toni Hughes Glasscoe, both incumbents, and Ashley Kuykendoll face competition from a right-wing slate seeking election to the …

LaForet expressed concern with the City Pulse questions, which she failed to answer. She said that seeking her “opinion” on the 2020 election “has nothing to do with being on the school board.” The survey asked whether the candidate would accept a loss either before a recount, or after.

Last week, she was standing directly behind Republican gubernatorial nominee Tudor Dixon as the one-time actress and political commentator attacked public school officials of support a “sex and gender agenda” in the public schools. LaForet enthusiastically applauded Dixon’s challenges to “biological boys competing against girls” and false claims that schools would be able to dispense puberty-blocking agents to children without parental knowledge or consent.

Despite her not answering the City Pulse survey, her social media footprint provided a wealth of information.

She and her two fellow slate members have proudly shared a Facebook image of an endorsement from Dr. David J. Smith, a primary care physician in Grand Ledge. He contends that “missteps” with education and COVID have harmed students, although he has never explained the alleged missteps. He further states the district is being run on a “political agenda” and references the “WOKE/PC culture.”

The trio has also accepted the endorsements of the Michigan Health Choice Alliance. The group opposes masks. It is also very active in the campaign of Republican John Gibbs as he tries to win the 3rd Congressional seat on the west side of the state. While a student at Stanford University, Gibbs started a think tank called the Society for the Critique of Feminism. The organization argued, according to a CNN report, “women did not ‘posess (sic) the characteristics necessary to govern,’ and said men were smarter than women because they are more likely to ‘think logically about broad and abstract ideas in order to deduce a suitable conclusion, without relying upon emotional reasoning.’”

The three candidates have a history in the district of challenging the school board and officials. Oneil challenged the district to end its mask mandate in a video from a Feb. 17 board meeting. Her children stood when she approached the podium and they were asked to sit, Oneil telling the board they were her children and then telling the youth to stand behind her in spite of a directive from the board.

Devenbaugh filed a complaint with the Michigan Department of Civil Rights alleging he was discriminated against because he is white. He alleges school officials, including then-superintendent Marcus Davenport, refused to meet with him. The district’s attorneys countered that claim, noting Devenbaugh met more often with school officials and Davenport than most parents, according to a report in the Lansing State Journal.

On his candidate Facebook page, Devenbaugh shared videos from “LibsofTikTok” arguing LGBTQ people want more than equality — they want children, the video implies by citing one case of a Mt. Pleasant Schools employee who was arrested for alleged trying to meet a minor for sex. The employee had spoken in support of an LGBTQ inclusive curriculum in the schools. In his post July 24, he said the accused was “trying to groom our students.” On July 22, he shared a post from the Michigan Liberty Leaders, writing in his comment, “We can’t let the staff groom our kids.”

In the Sept. 18 “town hall event” featuring Tarver and as well as the three self-labeled “conservatives,” Devenbaugh claimed the district has not been transparent in how the COVID relief dollars allocated to the school district — just over $2.5 million in all — has been spent. In fact, the district has that breakdown available from the district and was recently highlighted in a “Frequently Asked Questions (FAQ)” section launched by the administration.

Grand Ledge is not the only district in Ingham and Eaton counties facing extreme candidates. In Potterville, former City Councilwoman Katherine Schmidtt (now Bussard because she married a former Council colleague) refused to answer City Pulse survey questions about political affiliations and whether Donald Trump won the 2020 presidential election, among others. Her Facebook page revealed she’s an active Republican precinct delegate and organized a GOP women’s group in Eaton County. It also revealed she shares items from Salt and Light Global, a ministry that has long opposed LGBTQ equality and abortion. It is connected with the Great Lakes Justice Project, run by Delta Township attorney David Kallman.

In Waverly, Mary Ann Martin, who did not respond to the City Pulse survey, shared a video link to a conspiracy website, The Truth About Vaccines, in which mandatory vaccines are called “draconian” and a violation of choice. She’s a fan of the Ingraham Angle from Fox News on her Instagram and is an advocate for breast feeding.

Also in Waverly, Principal Vince Perkins also did not respond to the survey. But when he was principal of Waverly High School, he was handed a two-week unpaid suspension for failing to fill out teacher evaluations, according to the Lansing State Journal. His LinkedIn profile lists him as working at the district for the last 10 years as the director of human resources.

Conservative groups and political action committees are pouring millions of dollars into local school board races, reported Politico. Groups like The American Principles Project and the 1776 PAC are hitting hard, slamming candidates with allegations of teaching critical race theory, a gender agenda and more.

It’s been fueled, in part, to Florida’s GOP Gov. Ron DeSantis. DeSantis signed a law earlier this year, dubbed “Don’t Say Gay,” barring conversations about sex and sexuality in grades K-3 and requiring they be kept “age appropriate” after that. DeSantis is chomping at the heels of former President Donald Trump in consideration of a run for president in 2024. His brash take-no-prisoners political style has played well with the GOP establishment infuriated by COVID restrictions, LGBTQ equality activity, racial equity protests and demands and more. His spokesperson accused anyone opposed to the “Don’t Say Gay” legislation as supporting child sexual grooming.

But this extremism is on display in Michigan from school boards to the governor’s race. It’s rising up through allegations of a stolen election and focusing “culture war” virtue signaling onto the electorate.