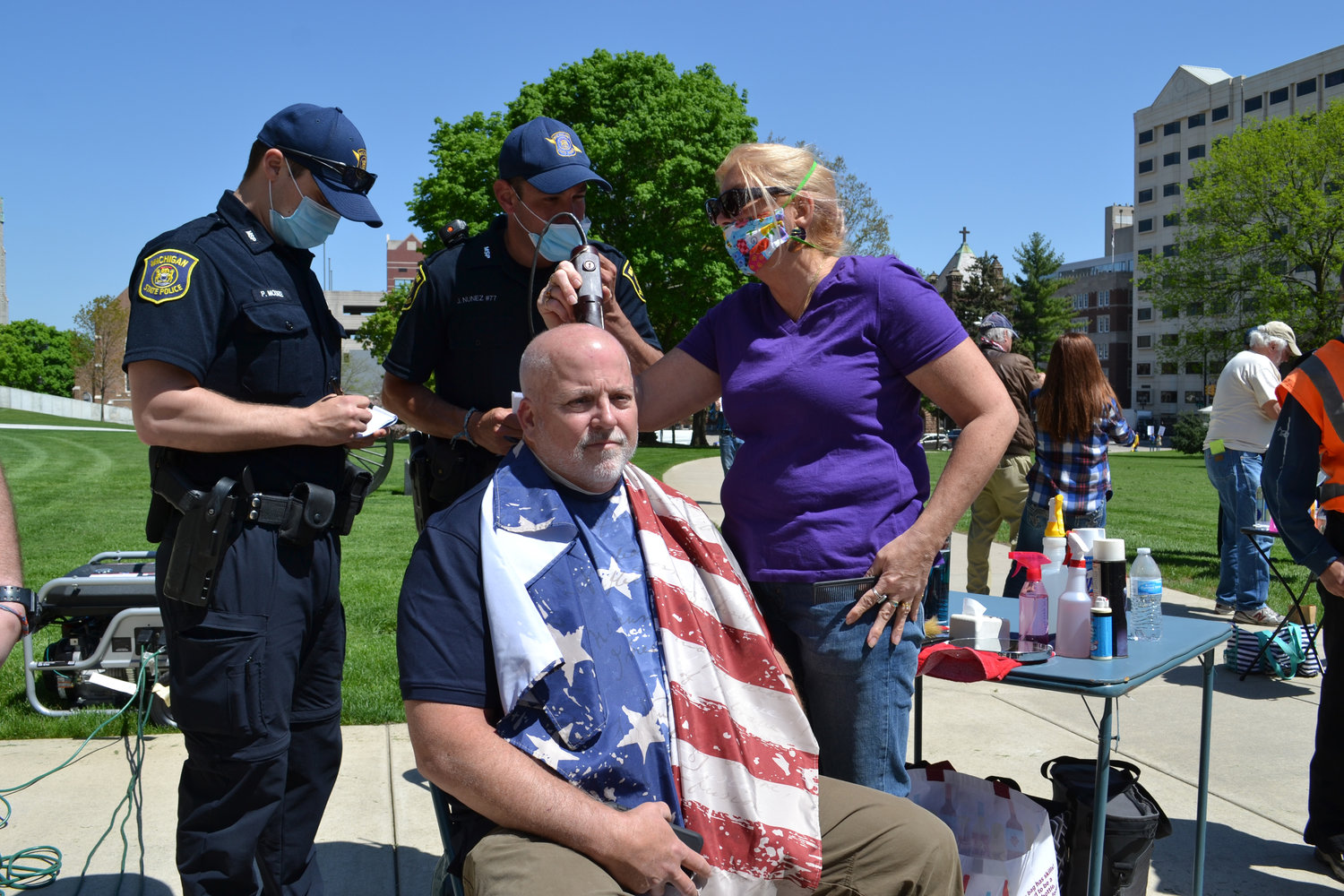 A man receives a haircut while police officers look on. They were not distributing tickets.
Skyler Ashley/City Pulse 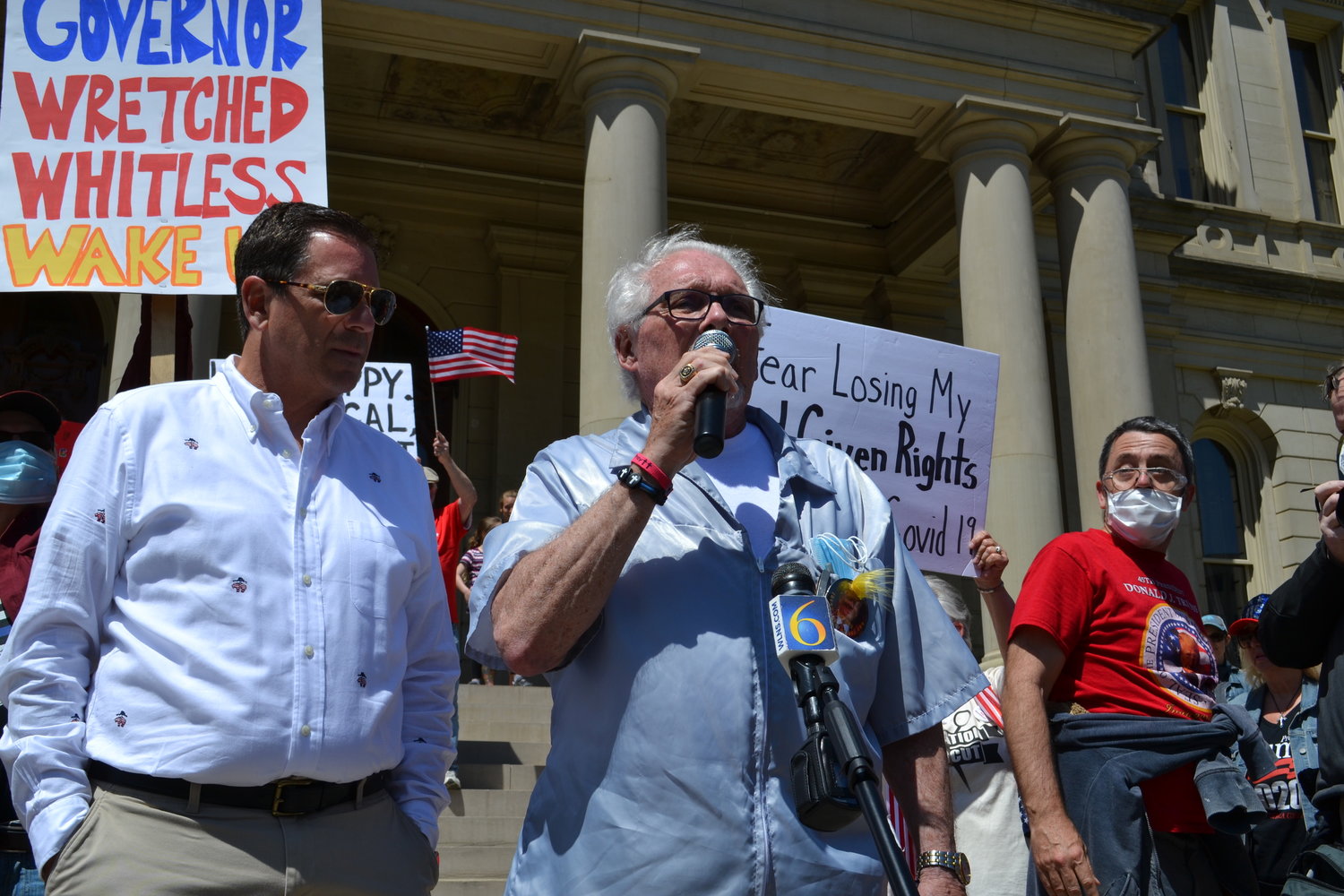 Rogue Owosso barber Karl Manke, whose business license was pulled after he refused to close, briefly spoke from the Capitol steps and was expected to give haircuts throughout the afternoon. At one point, he compared the lockdown to the Holocaust to thunderous applause.
Skyler Ashley/City Pulse 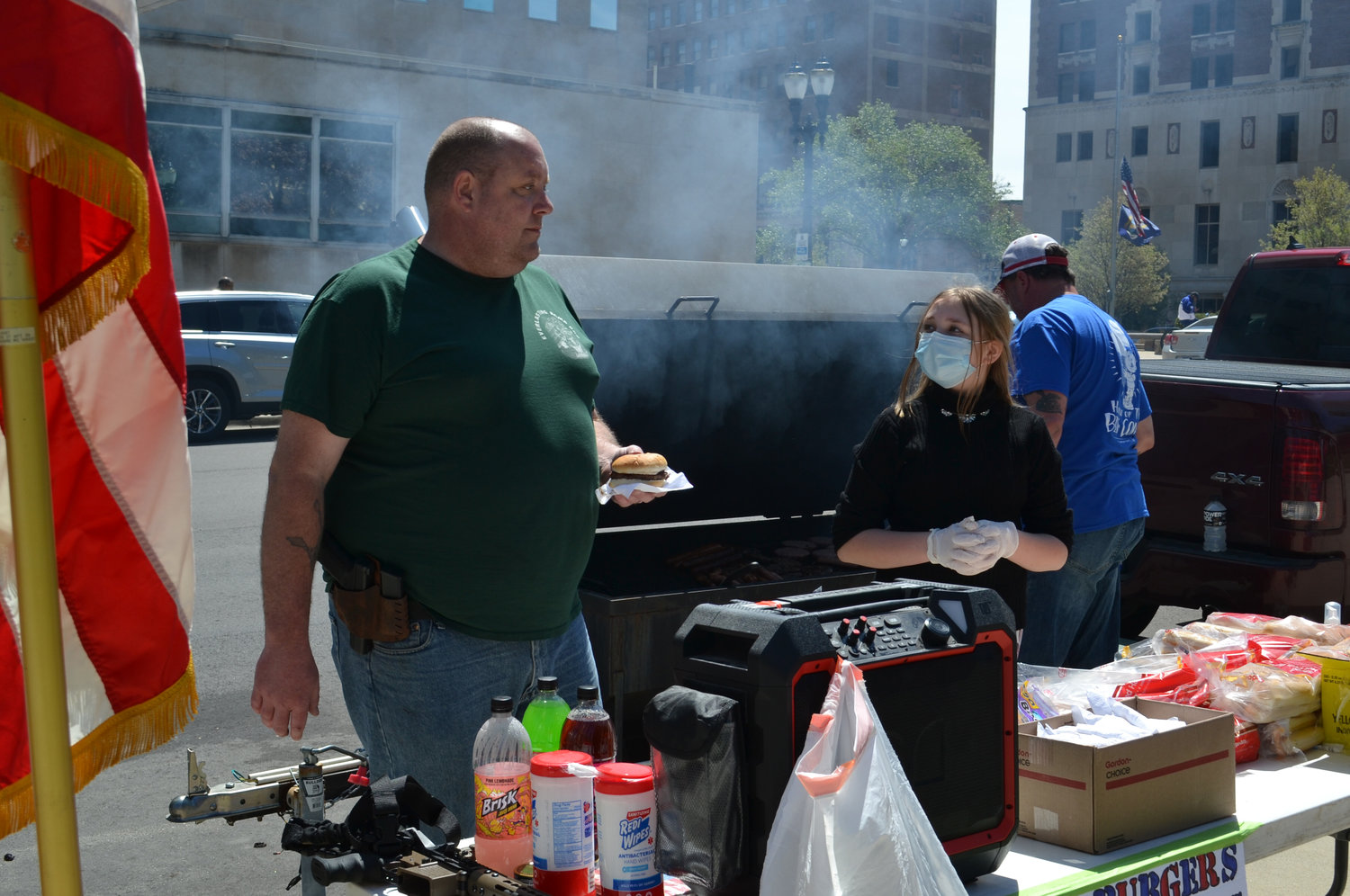 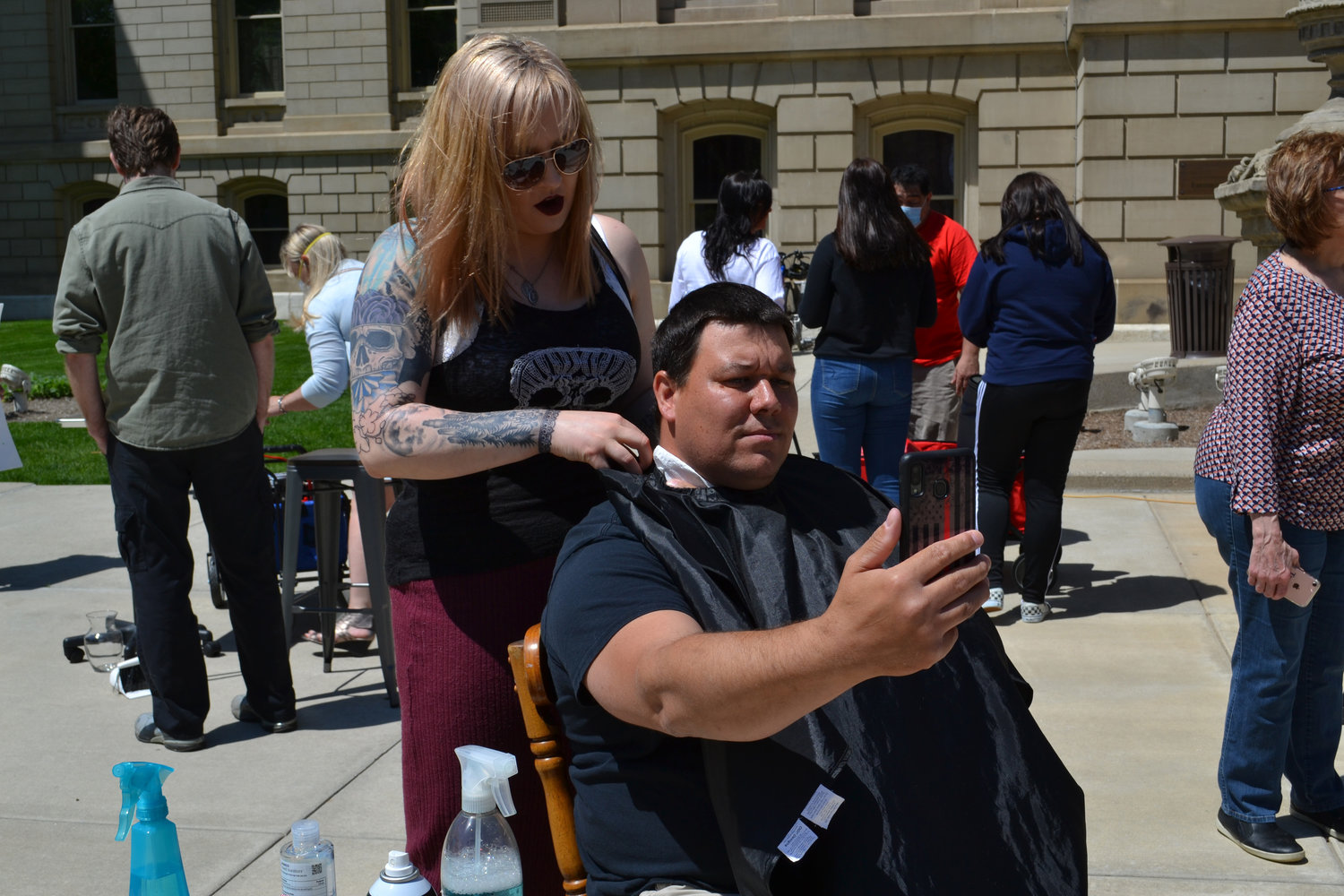 A man prepares for a haircut.
Skyler Ashley/City Pulse 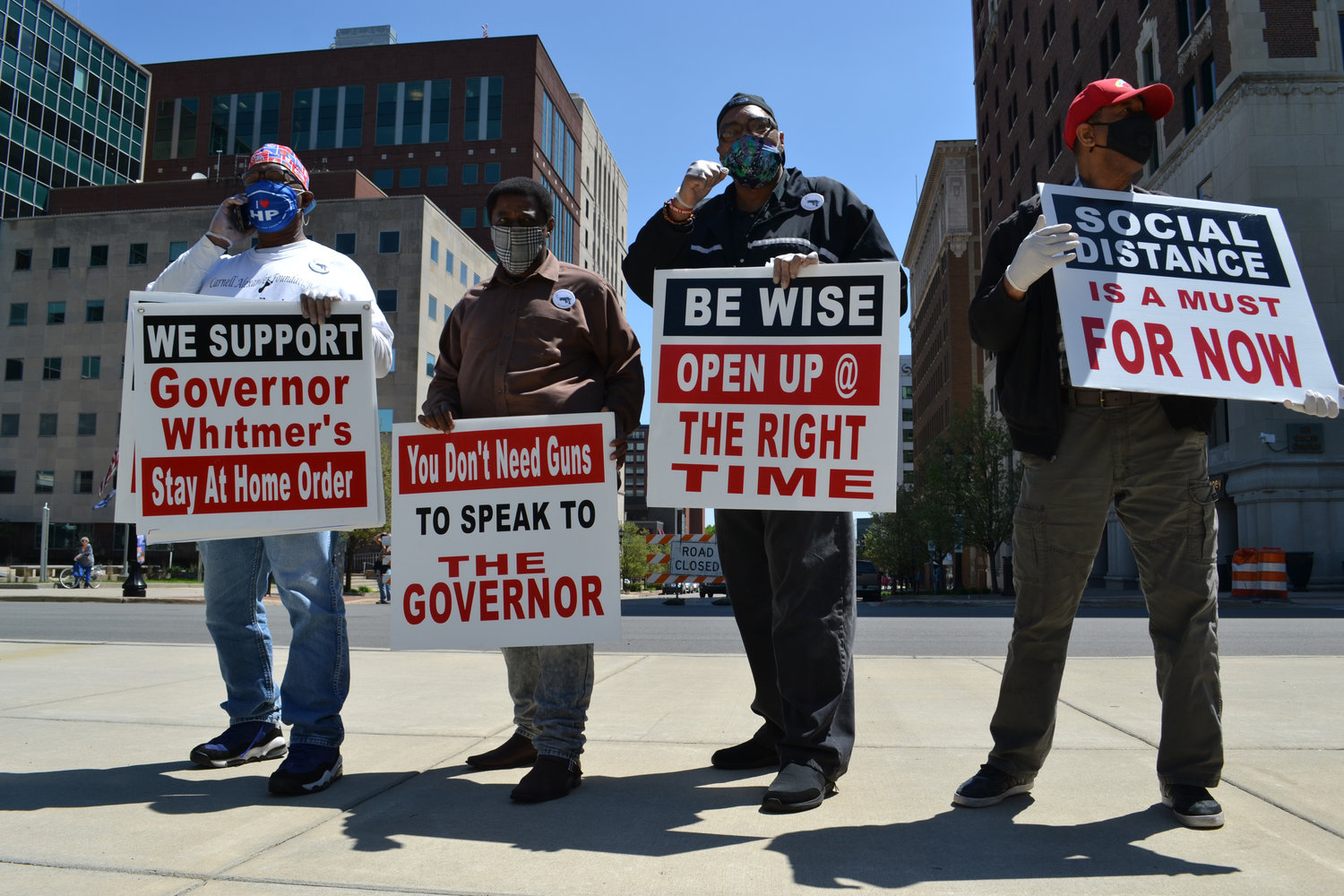 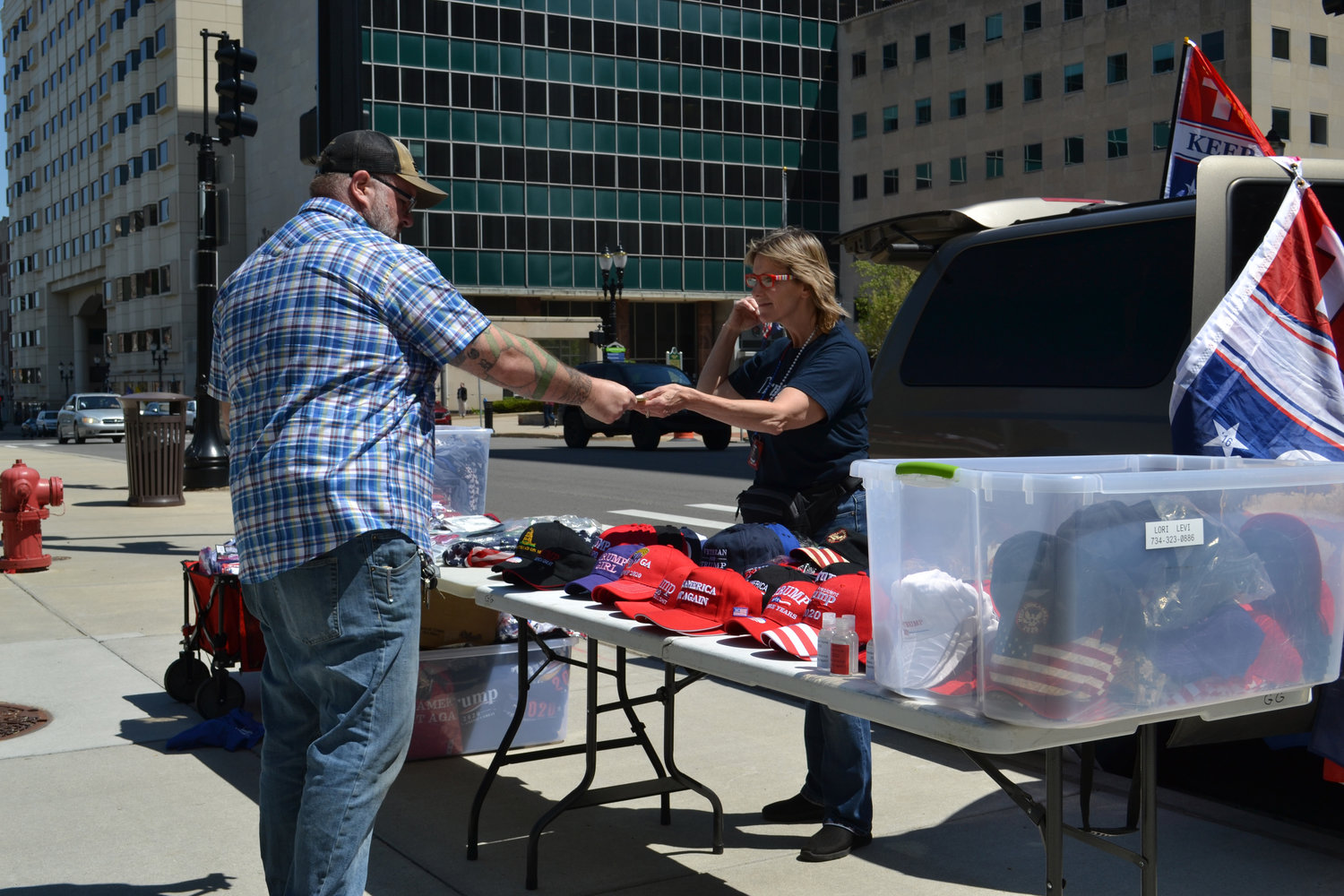 WEDNESDAY, May 20 — Hundreds gathered at the Michigan State Capitol this afternoon to protest and openly defy Gov. Gretchen Whitmer’s executive orders that prohibit many nonessential businesses — including salons and barbershops — from opening until May 28.

Crowds formed lines that, at some points, stretched from the Capitol steps to Capitol Avenue as many waited to get haircuts as part of the Michigan Conservative Coalition’s latest protest, “Operation Haircut.” The same group organized Operation Gridlock in April.

Sheridan’s message was echoed across the Capitol lawn as at least six hairdressers, in a blatant act of civil disobedience, gave out haircuts to other demonstrators on the sidewalk. Some people sold Trump gear out of their cars. Others cooked up burgers and hot dogs.

“We believe in freedom of choice,” said Barbara Burpee, a hairdresser from Charlotte. “Why not just let the professionals do it? I worked really hard to build up my clientele. People are getting angry at me because of the governor. I think people should have a choice on what they do.”

Under Gov. Gretchen Whitmer’s extended stay-at-home executive order, nonessential businesses — including salons and barbershops — must remain closed through at least May 28. Willful violations could become misdemeanors that cause a business to lose its license.

Bars, tattoo shops, gyms, bowling alleys and barbershops will be among the last to open, Whitmer has said. And they certainly won’t be allowed to operate without strict guidelines, she said.

Burpee thinks Whitmer is attempting to eliminate the middle class and create a new society of only very poor and very rich people, leaving “peon hairdressers” like her to wither on the vine. Whitmer, for her part, has repeatedly emphasized that she’s just trying to save lives.

“This is just a government thing,” Burpee added. “I just think I should be in a free country.”

Rogue Owosso barber Karl Manke, whose business license was pulled after he refused to close, briefly spoke from the Capitol steps and was expected to give haircuts throughout the afternoon. At one point, he compared the lockdown to the Holocaust to thunderous applause.

Said Livonia demonstrator Kay Thomas: “It’s not just about haircuts. My husband is laid off. He wants to get back to work. This isn’t how immunity is built up. You don’t build up immunity by staying sheltered away. “Maybe I’m a boomer, but we need more fresh air and sunshine.”

Thomas, like many of the other demonstrators today, wasn’t wearing a face covering. She incorrectly believes that wearing a mask can be much more dangerous than wearing nothing at all during the pandemic, and she refuses to believe proven science on how a virus can spread.

“It’s like this germophobia out there. If you walk across the street, you can also get hit by a truck,” Thomas added. “I’m not convinced the science is behind this super quarantine. I don’t think it’s healthy. Masks do not prevent COVID-19. We need to build up our immunities.”

Mask advocates have made it clear masks are to protect others from someone wearing one who has the virus, knowingly or not.

Thomas is an advocate for forming a societal herd immunity to the virus rather than employing social distancing techniques and taking other measures to prevent its spread. Studies have shown, however, that forming a functional herd immunity is a deadly and disastrous proposal.

Researchers at John Hopkins University have found that 70% of more of the population would need to become immune to the virus to achieve herd immunity for COVID-19 — with over 200 million Americans needing to get infected with the virus before that threshold can be reached.

Put another way, if the current pace of the COVID-19 pandemic continues in the United States, it would be well into 2021 before we reach herd immunity. And if current daily death rates continue, over half a million Americans would be dead by that time, researchers have found.

Before the event, the Michigan State Police — tasked with patrolling the Capitol grounds — had not disclosed how they would handle enforcement of blatant social distancing violations. Many officers, like at other Capitol rallies, were seen looking on as dozens of people broke the law.

At least a few citations were reportedly issued to hairdressers for violations of executive orders, though that couldn’t be independently confirmed with authorities. One officer said that police were focusing on warnings and education before tickets and declined to comment further.

State cops have generally not cited protesters for violating executive orders at the Capitol.