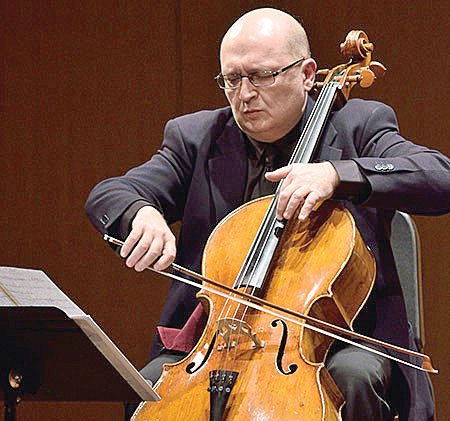 Picture ID, proof of COVID 19 vaccination or a negative COVID test required; mas must be worn at all times

Amid the mass casualties, bomb blasts and dancing dictators of the mid-20th century, the dark art we now call “processing” trauma was perfected by Soviet composer Dmitri Shostakovich.

In Shostakovich’s searing first cello concerto, the centerpiece of Friday’s Lansing Symphony concert, soloist Suren Bagratuni will have to push beyond his instrument’s mellow songfulness and chop into the viscera of life like a butcher. The cello sings, sobs and sighs in an almost human voice, and at the end it even dances — with naked feet on hot coals.

Shostakovich’s first cello concerto was written in 1959, nearly a generation after World War II and five years after the death of dictator Joseph Stalin, but human wreckage haunts the work from beginning to end.

Its demands on the cellist, both technical and emotional, are extreme.

“It’s a very physical experience for me,” Bagratuni said. “I’ve played it many times around the world, and I think it’s one of the most important pieces in the cello repertoire.”

This Friday’s concert will be Bagratuni’s first orchestral concert in the United States in two years.

He was born in Erevan, Armenia, and grew up in the Soviet Union when it was still reeling from a cataclysmic war and waves of Stalinist purges that, taken together, caused deaths in the tens of millions.

For music Director Timothy Muffitt, just having Bagratuni on stage makes the night an event.

“This has been a long time coming,” Muffitt said. “There aren’t very many people who play the cello the way Suren plays.”

Muffitt is almost chagrined that he hasn’t worked with Bagratuni yet. After years of doing the schedule dance, the Shostakovich concert was finally set — in the totally lost season of 2020-’21. Muffitt restored it to the top of his priorities for this season.

“This concerto is part of his DNA — it’s going to be among the great readings of this work,” Muffitt said.

After the jabbing, sarcastic melodies and countermelodies of the first movement, the second movement brings a melancholy, hushed melody Bagratuni calls a “tragic lullaby” — the core of the concerto and his favorite part.

The cello sings its heart out over an uneasy, slow rocking from the orchestra until the lullaby drifts into a glassy, spectral register of ultra-high harmonics. A celeste, a keyboard instrument that sounds like tiny bells, quietly snatches the thinning song into the stars, as if a soul had just left the Earth.

“It’s the first time you hear the celeste in the whole work, the only time, and the moment has incredible impact,” Muffitt said.

“I don’t like to share this with people, because it is rather dark, but I imagine a field of war,” Bagratuni said. “A mother realizes she is singing a lullaby to a baby who is dead. Growing up in the Soviet Union, I was born less than 20 years after the end of the war, and this is what comes to my mind.”

The stunning solo passage, or cadenza, that follows, seems to take us inside the brain and pinch the central nerve that holds a human being together. Frantic glissandos go up and down the instrument, grabbing for a lifeline. Bits of former melodies struggle for air under the building ice pack. Crash — the cello breaks through and rides the orchestral chaos to the bitter end, even throwing in a dance figure or two. Might as well. Chaos doesn’t care.

“The pandemic is a world war, too, a cataclysmic world event, and the way art responds will be increasingly powerful,” Muffitt said. “Shostakovich was one of the few composers who was still responding in a contemporary way, creating artwork that was of his time, but it had an immediacy that other composers were not finding.”

The concert will open with Patrick Harlin’s “River of Doubt,” a half-hour orchestral journey through the Amazon rain forest inspired by Candice Millard’s 2005 book.

In addition to composing music, Harlin also researches and documents natural sounds from around the world. “River of Doubt” weaves real insect and bird noises, captured by Harlin on tape, into a fluid orchestral tapestry. (Muffitt described the delicate blending of acoustic and recorded elements as “feathering,” without apparent irony.) Harlin even specifies the bird species depicted by the musicians on the written score.

Although Shostakovich and Harlin are a century of history and half a world removed from one another, Muffitt said their music has an important element in common.

“Patrick’s music also connects with the listener on the first hearing,” Muffitt said. “Composers like Patrick, composers like Shostakovich, have found a way to be uncompromising in their style and their language and still be visceral and evocative.”